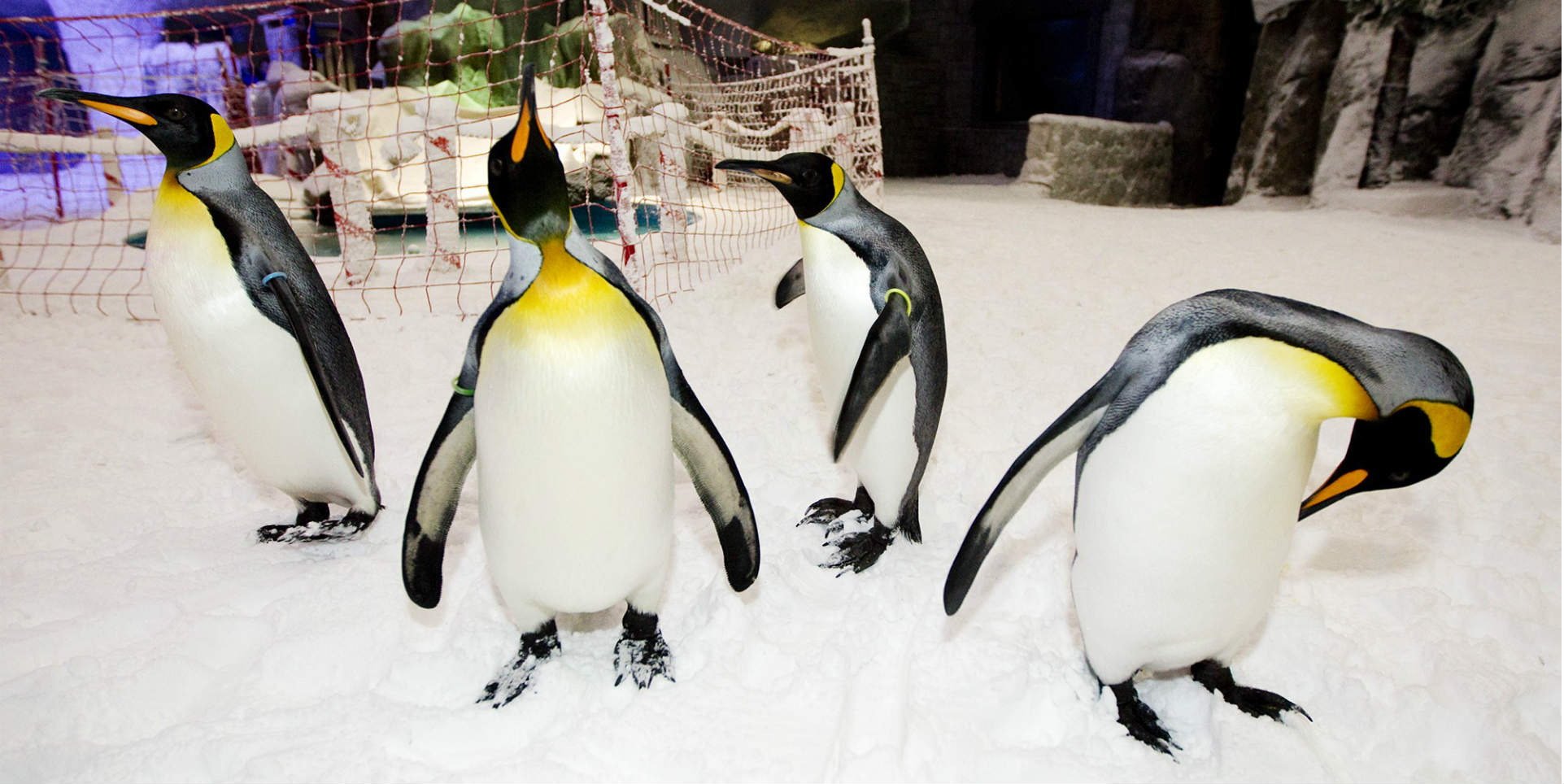 I adore animals, and any chance I have to see, meet or otherwise interact with them I seek out around the world.  In the USA there are many rules and regulations and safety issue that prevent direct interaction, but in Asia where such lines can be blurred at least slightly, there are many more opportunities.

I have recently petted the bellies of adult Bengal Tigers in Chiang Mai, bathed baby elephants in Chiang Rai and played with baby pandas in Chengdu.  These were all incredible experiences, but I think my recent private penguin afternoon was the most incredible.

I paid around $1,000 (for four people) to have a group of 14 penguins to myself for about an hour and a half in Dubai, and it was worth every penny. I brought a friend along who has lived in Dubai for more than a decade, but never knew about the private penguin experience.  No one at my hotel did either.

The price was on the higher end of the scale compared to what I’ve paid to interact with animals before, but what can you expect when you are inside a winter wonderland with animals built to survive in the world’s coldest, harshest climates, within a city in the middle of a desert where temperatures average 86 degrees.

I walked into the Mall of the Emirates wearing a light cotton sun dress and sandals, and the staff gave me long warm ski pants, ski jacket, socks, rubber winter boots and fleece gloves to prepare me for the cool -3 degrees Celsius or 25 degrees Fahrenheit.

For those keen on replicating my experience, I advise taking a change of clothes with you, including  jeans, a warm sweater/jumper, a thick hat, and be sure to bring your own gloves because the gloves they provide are light and not quite warm enough. Once you start playing with the penguins, your hands get wet and very cold.

Once inside, we were given the ultimate VIP access to the private areas where the penguins live, off limits to regular visitors. The crowds gathered outside and watched with envy as they observed us frolicking freely with our new furry friends. I couldn’t believe that I had total access to over a dozen of of the sweetest penguins I could imagine. We touched and hugged them, from their white-as-snow tummies to their floppy black and white wings, and the penguins were extremely receptive, friendly, and even affectionate towards us – it was truly heaven!

As I stroked Wally, one particularly friendly penguin, I noticed he felt soft, wet, and cold all at the same time, and when I looked closely, I could see his coat of thousands of fine, smooth feathers.

Penguins have very few natural predators on land, so they are not afraid of humans, although in the wild they do not allow you to touch them.  I remember going to a massive penguin sanctuary in Punta Arenas in southern Chile called a “Pingüinera”  and seeing many thousands of penguins waddling around, but if you tried to get too close they would turn around and spray an unlovely brown liquid at you. The penguins in Dubai are used to people so they are happy to be touched.

They also have the capacity to love, communicate with one another, look out for each other, and of course, play together! Of course, there are many different species of penguins, ranging from the well-known Emperor Penguin, to the lesser-known Macaroni Penguin, and all are different in their own way.

Dubai has Gentoo Penguins and King Penguins, who are known for their lengthy breeding cycles, taking up to 16 months to fledge a single chick. They are the second-largest penguin species, and are similar in appearance to Emperors. Their natural habitat is the sub-Antarctic belt, though a few of them have lost their way during migration and have been found as far as South Africa and Tasmania, Australia. I was told by their trainers that King Penguins are known for being the friendliest out of all the species.

They have names like Wally, Lollipop, Lucifer, Jumeirah and Cuddly, and they know their names.  They have plastic color tags around their “arms” that differentiate them, but their beloved trainers (from India, Bangladesh, the Philippines, South Africa, Australia) know them so well anyway, and each penguin has a distinct personality. To my surprise, the penguins knew their own names, and responded when they were summoned. It was a thrill to see their high intellect in practice.

They live the life of Riley in a very large area with about 15 different rooms which we toured with our new friends over about 90 minutes. We moved from the swimming pool – probably the penguins’ favorite spot, as they have a particular fondness for swimming, to their “bedroom”, to their “dining room”, where they dine on fresh fish flown in from Canada (King Penguins indeed!), to their kitchen, where each penguin had its own cooler bearing his or her name, in their own special refrigerator. The trainers explained that they dish out precise quantities of food to each penguin on a daily basis, according to the penguin’s body weight.

We were accompanied by a professional photographer throughout who took dozens of shots and gave us a CD afterward of the images and 4 large 8×10 glossy photos. We were not able to take our own pictures or use our own cameras.

Our tickets also allowed us access to the Ski Dubai Snow Park, where we could toboggan, bobsled, or zipline, as well as access their giant snowball (basically a zorb) and ride the chairlift.  Skiing was an additional cost or around $50/person, which my friend treated me to.  Please see my separate blog on Snow Skiing in the desert in Dubai – coming soon!

The entire experience was absolutely unforgettable, and one that I would highly recommend to anyone looking for a unique experience in Dubai.