The remote Kamchatsky peninsula, a 10-hour flight from Moscow, is a wilderness roughly the size of Germany, Austria and Switzerland put together. Once a military zone forbidden even to Russian citizens, Kamchatka is now one of the world's last and largest natural sanctuaries. Boasting around 300 volcanoes, one bear to every thirty human inhabitant, hundreds of thermal springs, 100,000 lakes and rivers, rare eagles, and abundant reindeer, moose and wolves, eco-tourism the region's main industry.

Situated on Kamchatka Peninsula and enclosed by mountains in the north and the ocean in the south, Petropavlovsk-Kamchatsky  is the second-largest city in the world that isn't reachable by road. Those that do make it this way, however, are treated to some particularly beautiful scenery in the form of huge snowcapped volcanoes overlooking the city, as well as the Avacha Bay's rugged and diverse terrain stretching into the north Pacific Ocean. Day-trippers using the city as a hub to explore this area of Siberia can find enough attractions, activities, restaurants and bars to fill-up their itineraries for a few days, with a number of museums, galleries and markets found around the city center. We can offer a range of excursions taking advantage of the natural beauty of the surrounding area, such as hiking, cross-country skiing, boat trips and ice skating.

The Soviet-style city set against the backdrop of the towering volcanoes is an iconic image; Avachinsky, Koryakskaya Sopka and Kozelsky volcanoes are all just a short drive away, with the highest reaching over 11,000 feet. Popular activities on the volcanoes include hiking, mountain climbing and downhill biking for thrill-seekers.

The Kamchatka Peninsula’s pristine volcanic landscape is as wild and beautiful as nature can be. Active volcanoes, geyers, hot springs dot the land while rivers, glacial lakes, and extensive swamps fill out low plains and coastland. The rugged and vast terrain is best seen and traveled from above by helicopter, making day-trips to Kamchatka’s most remote and beautiful areas easy and accessible.

Located on the southeastern coast of the peninsula, Avacha Bay is Kamchatka’s main seaport and also a landmark of classic natural beauty. Take the time to get up close from a motorboat for the most rewarding views. A cruise around the bay grants spectacular sights such as a the unique Stellar sea lion habitat, rock statues, dramatic cliffs, nesting birds, and nearby volcanoes in the backdrop. Killer whales and fur seals are also frequently spotted in the bay.

Due to the volcanic landscape, thermal springs are plentiful across Kamchatka. One of the most popular activities amongst locals and visitors alike is a soak in these therapeutic mineral-rich hot waters. After warming up in the hot bath, it is custom to dive into a cold spring-fed lake which is very refreshing and said to be great for general bodily revitalisation.

Kamchatka’s amazing landscape offers a variety of interesting trekking routes across diverse terrain thanks to its fine alpine landscape, picturesque passes, mountain lakes, huge peaks, and exciting volcanic zones. Trekking levels can be easily accommodated; there is a large range from easy to moderate to longer and more technically difficult routes available.

Kamchatka’s pristine habitats, from mountains and plains to rivers, lakes, and ocean, are home to a variety of wildlife. Amongst the largest land animals are the Kamchatka brown bear which can reach almost 10 feet when standing. Visitors can observe these powerful creatures in the late summers when Kamchatka’s rivers run abundant of salmon racing upstream and an estimated 20,000 brown bears gather to enjoy the river’s bountiful feast. Off the coast, you can catch glimpses of fur seals, walruses, and sea otters while the ocean is home to many whale species including grey, minke, beluga, bowhead, and humpback. Rare and endangered birds such as the spoon-billed sandpiper and iconic Steller’s sea eagle can be found in the wetlands and river banks.

Both locals and tourists like to take advantage of the snow in winter months (November – May) and head to the hills to take part in some extreme sports. The most popular place near to the city is at Krasnaya Sopka, where downhill skiing is the preferred choice and a range of equipment is available for hire.

Set slightly away from Petropavlovsk-Kamchatsky's city center, Nikolskaya Hill stands as a popular place for first-time visitors wanting to get a new perspective of the city and surrounding Avacha Bay. At the top there’s also an impressive monument honoring the defense of the city during the Crimean War in 1854. 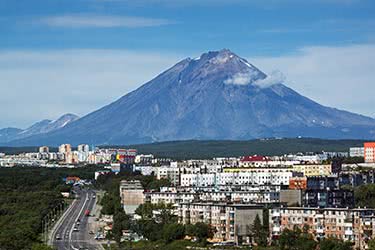 Ten memorable days of exploring Russia’s Kamchatka region will see you fly over volcanoes in a helicopter, scale summits at over 6,000 feet, dip in hot springs and venture on a breathtaking trip along the Avacha Bay to Starichkov Island - all while using your hotel in the city of Petropavlovsk-Kamchatsky as a base. 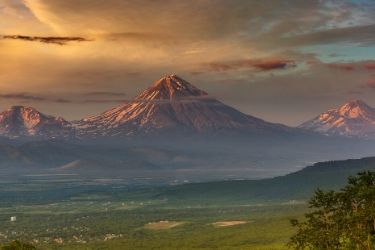 Discover Russia's Ring of Fire on a two-week Kamchatka adventure, traversing the peninsula's volcanic peaks and steaming geysers both on foot and via helicopter. Trek calderas, bathe in thermal waters and encounter families of brown bears splashing in the rivers, catching sockeye salmon.

Ten memorable days of exploring Russia’s Kamchatka region will see you fly over volcanoes in a helicopter, scale summits at over 6,000 feet, dip in hot springs and venture on a breathtaking trip along the Avacha Bay to Starichkov Island - all while using your hotel in the city of Petropavlovsk-Kamchatsky as a base.

Kamchatka is a mysterious destination in Russia’s Far East, located along the “Ring of Fire” and known for its more than 200 volcanoes and diverse wildlife.

Read Article
Kamchatka: Bears and the Ring of Fire

Kamchatka: Bears and the Ring of Fire

If you’re planning for spring, Kamchatka is most well-known for its large brown bears and whale watching.

Heliskiing in the Himalayas or hitting some of the finest powder in Japan, these destinations will inspire skiers to strap on their GoPro and hit the slopes. 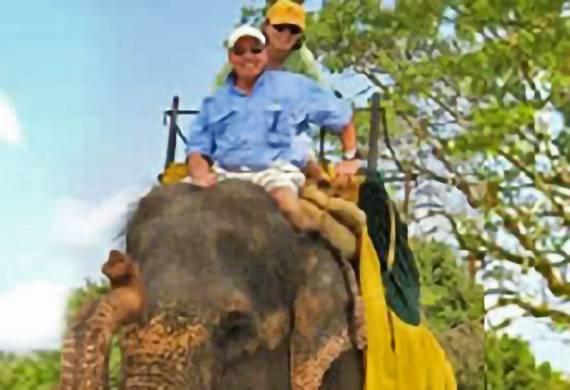 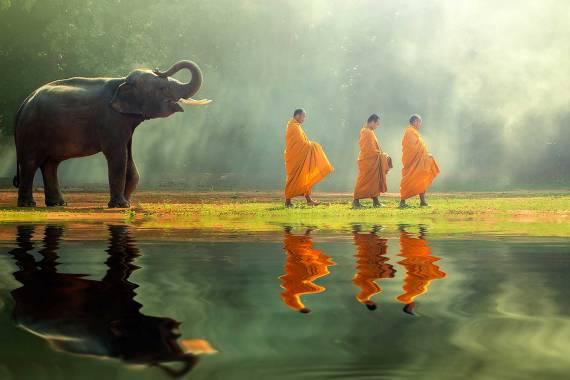 We had a wonderful time and pretty much every detail of the trip logistics went like clockwork... I am very appreciative to everyone on the Remote Lands team. 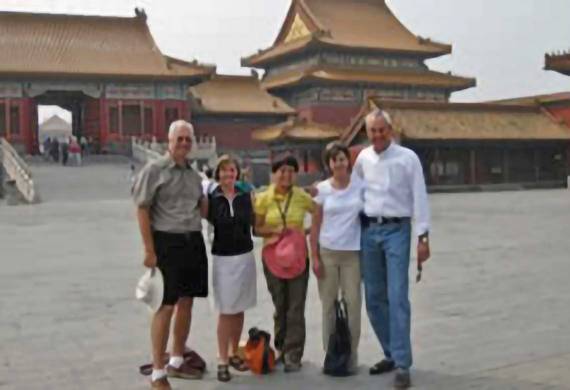