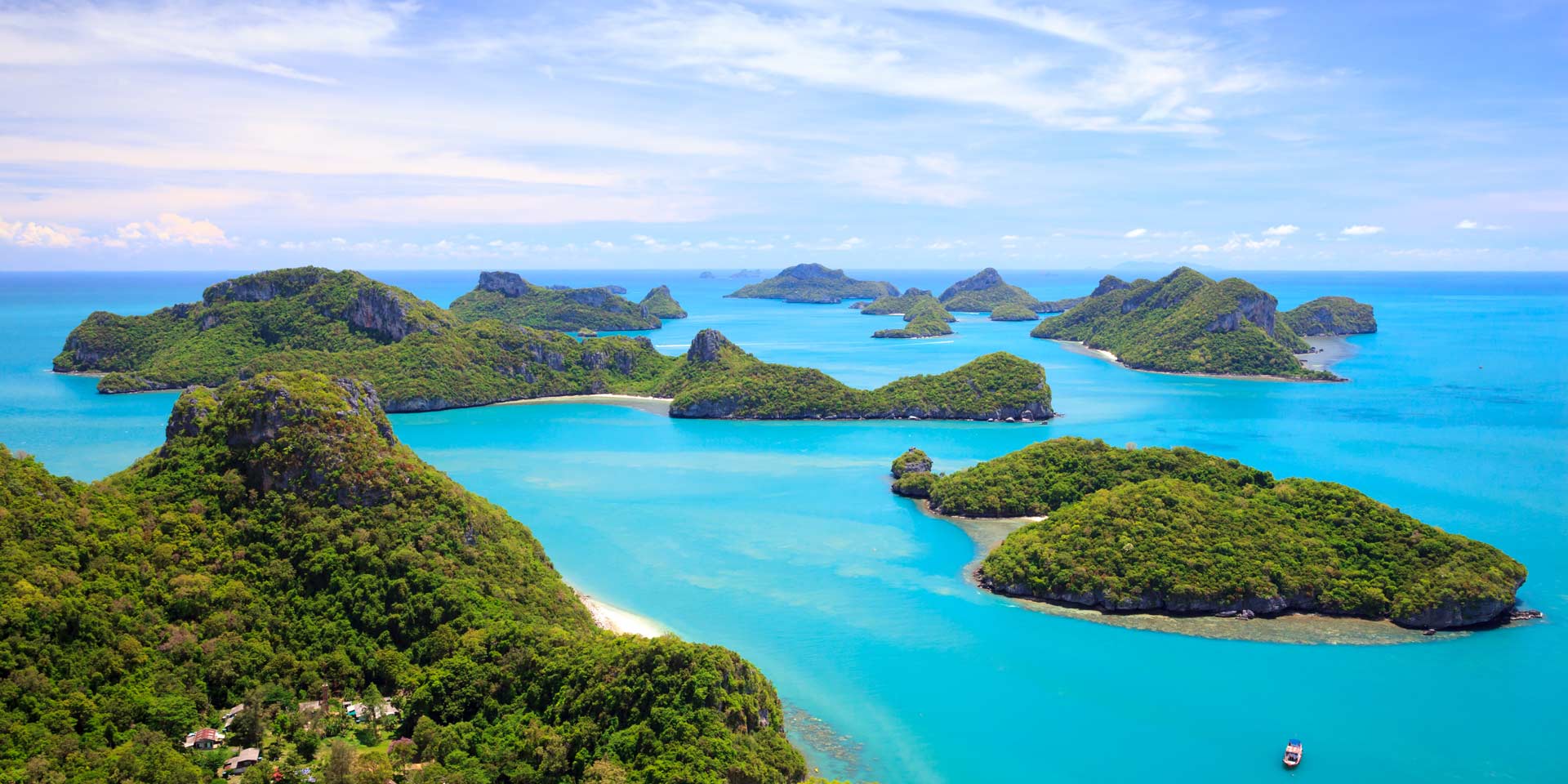 There is nothing quite like an island escape to help you unwind, your stresses melting into the powdery white sand as you gaze upon a calm emerald ocean. And when it comes to breathtaking island destinations in Asia, there is, quite literally, an archipelago of hotspots to choose from. Thailand is famous for its many pristine isles that dot its southern shores, while Indonesia and the Philippines are made up entirely of thousands of islands – some large, some so small they disappear at high-tide. There are some excellent island getaways in Malaysia, and even in less-obvious places like Japan. So how are you to decide on the ideal island for your holiday? We’ve rounded up our top picks of Asia’s most amazing islands, to help make your decision easier, and to whet your appetite, providing you with some fantastic travel inspiration.

Just 10 minutes from Borneo’s Kota Kinabalu lies an expansive island covered in dense, virgin tropical forest, with 16 miles of pristine shoreline and vibrant corals thriving just off its coast – Pulau Gaya is one of Malaysia’s most spectacular islands. Gaya, derived from a local word meaning big, is the largest of a cluster of five islands, which form Sabah’s Tunku Abdul Rahman Marine Park. There are two fantastic five-star resorts here, and if lying on a beautiful beach all day isn’t your thing, there are plenty of activities here to keep you occupied. Visitors to the island often enjoy trekking through the island’s verdant backyard, where a hiking trail winds its way through a lowland rainforest, passing mangrove swamps and a fishing village, and home to rare species of birds. There have also been sightings of Proboscis and Macaque Monkeys, hornbills, mouse deers, and Bearded Pigs on the island. Divers will get a thrill from the abundant and highly-active marine life, including well-preserved corals, which run along the entire coast of the island, while deep-sea fishing is another favorite activity. Of course, beachcombing and lounging are the most popular activities on the island, and Police Bay, also called Bulijong Bay, is a legendary spot to do it. Rare is it to find an island that has such diversity and beauty, as well as extremely high-quality luxury facilities.

Vietnam is famous for its natural beauty, but is not well-known as a tropical getaway destination. The island of Phu Quoc, the country’s largest island, located in the south of the country in the Gulf of Thailand, is changing that. Visitors can access the island with ease, thanks to its international airport, the island being a mere 50-minute flight from Saigon. Here, they’ll find long stretches of well-preserved beaches, in part due to the much of the island’s status as a National park, with a protected marine environment. A trip to Phu Quoc is a treat for the senses, the island bursting at the seams not only with natural beauty, but also some of the country’s freshest, most delicious seafood. The island is also well-known for being home to the world’s best fish sauce, and high quality pepper. As such, dining at one of Phu Quoc’s relaxed beachside restaurants is a true delight. Dense forest blankets the mountainous terrain, making for spectacular hiking. One popular hiking destination is the sparsely-populated Bai Sao beach, often rated Vietnam’s best beach, on the island’s east coast. Luxury resorts have been cropping up over the past decade, and this, combined with the island’s friendly reputation, has elevated the quality of the island’s tourism to the next level. This is definitely a must-visit spot for those seeking a relaxed, memorable island vacation – but visit soon: with a golf course and casino being planned, the island could soon see an influx of tourists that threatens its reputation for serene beauty.

The island of Komodo is famous for its fearsome inhabitants that bear its name. The Komodo Dragon is the world’s largest living lizard, and its bite can be lethal. What the island is not as well-known for is its absolutely mesmerizing pink-sand coastline, one of only seven such coastlines in the world. Part of Komodo National Park (which also includes Rinca and Padar islands, as well as many smaller islets), the island is a UNESCO World Heritage Site, and was declared one of the New 7 Wonders of Nature in 2011. This is a true nature lovers’ delight, home to 4,000 species of wild birds, and around 25 different endangered species. Off the island’s shores, a rich and diverse marine habitat of 1,000 species of fish, 260 species of reef-building coral, manta rays, sharks, whales, dolphins, and sea turtles thrive, making for a true diver’s paradise. The best way to experience Komodo island and its surroundings is aboard a luxury vessel, allowing you full access to the practically untouched beaches and hidden corners of the island, and providing you with a comfortable place to sleep at night, far out of the reach of hungry dragons.

Palawan is a long sliver of an island paradise, stretching nearly 1,200 miles from Mindoro in the northeast to Borneo in the southwest. It’s surrounded by nearly 2,000 smaller islands which, together with the main island itself, make up Palawan province. With long stretches of virgin white-sand beaches, a rich diversity of flora and fauna, a fascinating UNESCO-listed underground river cave, forest-covered mountains that rise up to 6,800 feet, hidden lagoons, a host of five-star hotels and luxury facilities, and easy access via an international airport in Puerto Princesa, it’s little wonder that this island is a favorite getaway for Hollywood celebrities and the global elite, who escape to the island for clandestine tropical breaks. Considered to be the last ecological frontier of the Philippines, Palawan is a truly special place, blessed not only with beauty, but also a long, colored history that can be traced back 22,000 years. Visitors to the island can step back into the region’s history – from wreck diving WWII ships in Coron, to exploring the Tabon caves, where the earliest appearance of modern man, named the Tabon man, was discovered in the Philippines.

Situated in Papua New Guinea’s Milne Bay Province, lies a group of four main tropical rainforest raised coral atolls, named Kiriwina (the largest), Kaileuna, Vakuta, and Kitava, which make up the Kiriwina Islands, also known as the Trobriand islands. These little-known landforms make for an exciting and truly memorable tropical escape, far off the beaten tourist trail. Here, it’s not only the natural beauty that makes these islands truly stand out, but the truly traditional culture, rich with fascinating customs. Visitors will discover one of the last societies in the world to practice matrilineal descent, and a culture where dancing is taken quite seriously. Particularly prevalent during the region’s most important festival, the Yam Festival (which takes place annually in June and July) Trobriand island dancing is sensual and colorful – the girls wearing vibrant short skirts, with painted faces and oiled bodies, and the boys in grass skirts and elaborate headdresses. Top that off with clear lagoons, white-sand beaches, and thick, virgin rainforest, and you’ve got yourself yet another exciting tropical island destination to add to your life’s to-do list.