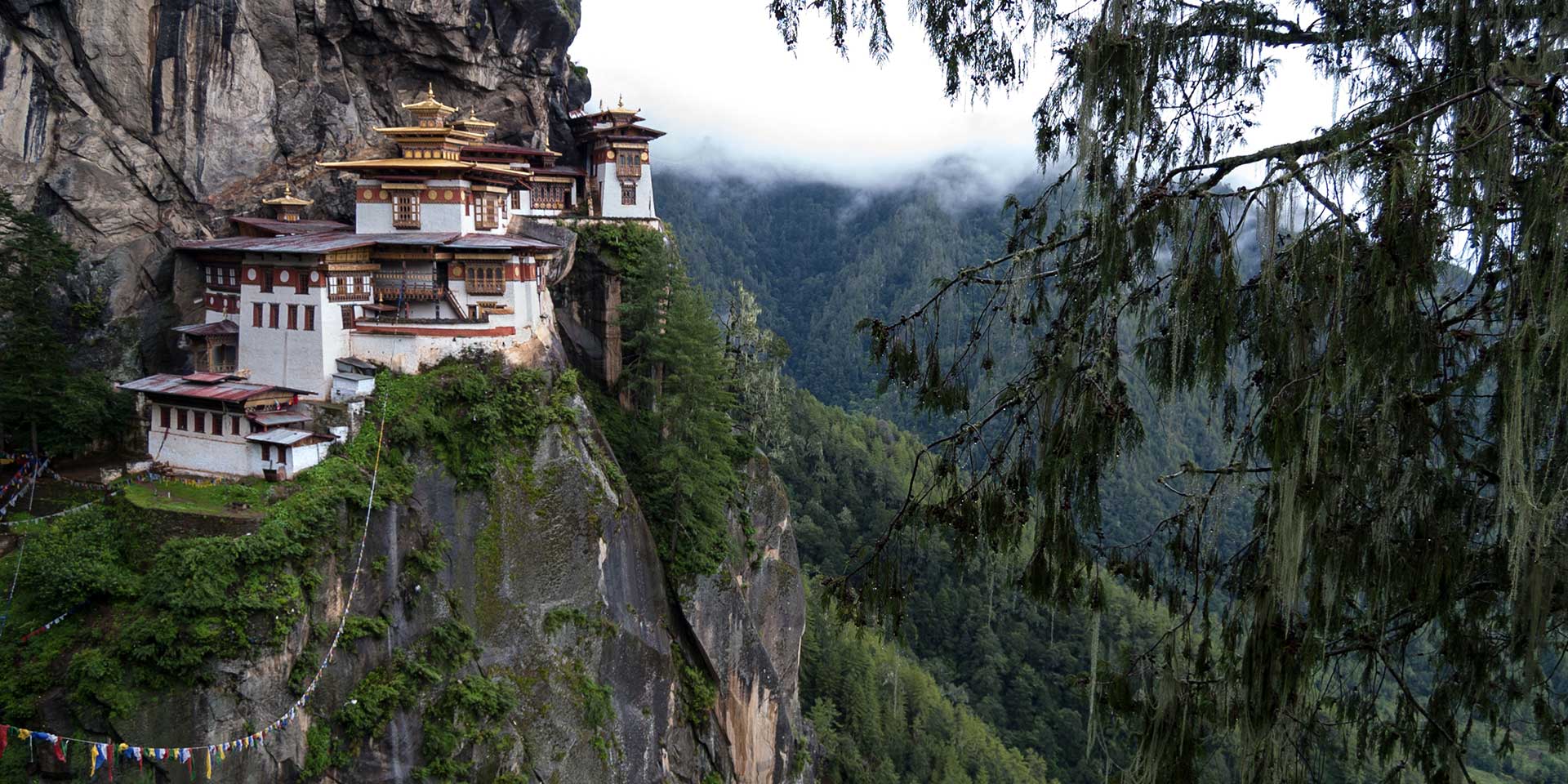 Nestled between India and China, Bhutan is tucked away like some distant dot on a map.  Few people get to see this amazing nation of rugged, wild beauty. Because of this remoteness, the country was practically untouched by the outside world until recent years. Television and the Internet for example, were only permitted in 1999. Bhutan was confused with Tibet on various European maps even into the 1800’s. The nation of Bhutan remains truly untamed. Its leaders prohibit smoking, and the “Gross National Happiness” is far more vital to the national ethos than the Gross National Product.

Taktsang monastery,  also known as the Tiger’s Nest,  is located near the city of Paro and is a major highlight of visiting Bhutan. It was built in 1692 around the cave where a certain guru meditated for three years, three months, three weeks, & three hours way back in the 700’s. And it was this guru, Padmasambhava, who brought Buddhism to Bhutan.

Remote Lands clients might well wish to trek to the Tiger’s Nest in order to see one of the greatest sights in Asia.   It is also known as the “Tiger’s Lair” Caves in which the aforementioned guru undertook his meditation marathon. There is a temple here which is quite elegant and was built in 1692 and has become the singular cultural icon of Bhutan. The official name is the Taktsang Palphug Monastery, whilst the cave where the actual meditation is said to have taken place is called the “Taktsang Senge Samdup.”

Not many people might realize the role that Buddhism plays in Bhutan. For example, Tsechu is a popular Bhutanese festival orchestrated to celebrate Guru Padmasambhava, and is held in March or April in the Paro Valley.  From the 1600’s the Tiger’s Nest has been an active monastery where meditation and prayer take place.

Yet there is a very interesting local legend that really struck my curiosity. According to Francoise Pommaret’s eloquent work Bhutan Himalayan Mountain Kingdom, Yeshe Tsogval, the ex-wife of an emperor, studied under Padmasambahva. As a “shape shifter,” Yeshe changed herself into a tigress and then carried the guru on her back all the way from Tibet to the spot where I eventually came to rest on this cliff in Bhutan. This is where the name “Tiger’s Nest” comes from, believe it or not. Only two other temples in the entire world are believed to exist at a higher elevation.

On a rainy and overcast August day I set out to hike up to the Tiger’s Nest. Unlike most people who depart on this adventure in the early morning, I set out on my hike in the afternoon along with my guide. The hike is conducted mostly on an upwards gradient and is pretty steep. To be more precise, it’s what we in the travel business would refer to as a “moderately difficult” hike – hard for people who rarely hike, but not so tough for experienced hikers in decent physical condition.

What with our fairly swift pace, and the fact that it was very slippery from the rain, it turned out to be a fairly challenging hike. There was no one else making their way to the top at this time, and only a few groups going down. About halfway up, Hollywood actor Matt Dillon passed me on his way down. I would see Matt other times on this trip — in the hotel, at the airport, and next to me on the airplane.  This illustrates just how small Bhutan really is.

An old woman was the only other person we saw climbing to the top that day . She appeared to be making the climb at a slow, steady pace (unlike me) and it was clear, at least to me, that she had done this very same trek many times before.

About one hour into the hike, which was about half way up, hikers will encounter a restaurant and a small rest area – but since it was late in the day, we had no time for resting, and continued on, eschewing the restaurant.

After this point on the journey, the views of Tiger’s Nest became increasingly stunning, and I began to really feel a strong sense of anticipation as we were getting closer and closer. It was really wonderful to see this whole scenic panorama with no other people around at all.

Up near the top, hikers must walk down a series of steps, passing a small waterfall and through a small structure with a prayer wheel with prayer flags draped across.  And then came the final ascent up the hill to Tiger’s Nest itself. If a picture was ever worth a thousand words … the colors, the clouds, the outcrops and the temperature combined to create an eerie and enchanting vista. The Tiger’s Nest was indeed everything people say it is – a destination worthy of any “Bucket List.” The cliff on which the Tiger’s Nest is situated is over 10,000 feet high. There are other approaches to the Tiger’s Nest by mule through the surrounding forest, and this only adds another dimension to the journey.

For me, this activity in Bhutan is much more about the view than the actual monastery itself. No photos are allowed inside and this is to be respected of course. Remote Lands clients frequently receive a private blessing from a senior monk while inside, which adds a special element to the whole endeavor.

The way down was in many ways more treacherous than the way up. It was getting even more slippery and as the afternoon grew short and evening tried to emerge it was getting dark. We were the only people on the mountain by this time, and when we reached the bottom, the sun had gone down completely. Yet while standing in the dark, I somehow felt illuminated. Once again I had the great opportunity to see something few other people in the world get to witness.