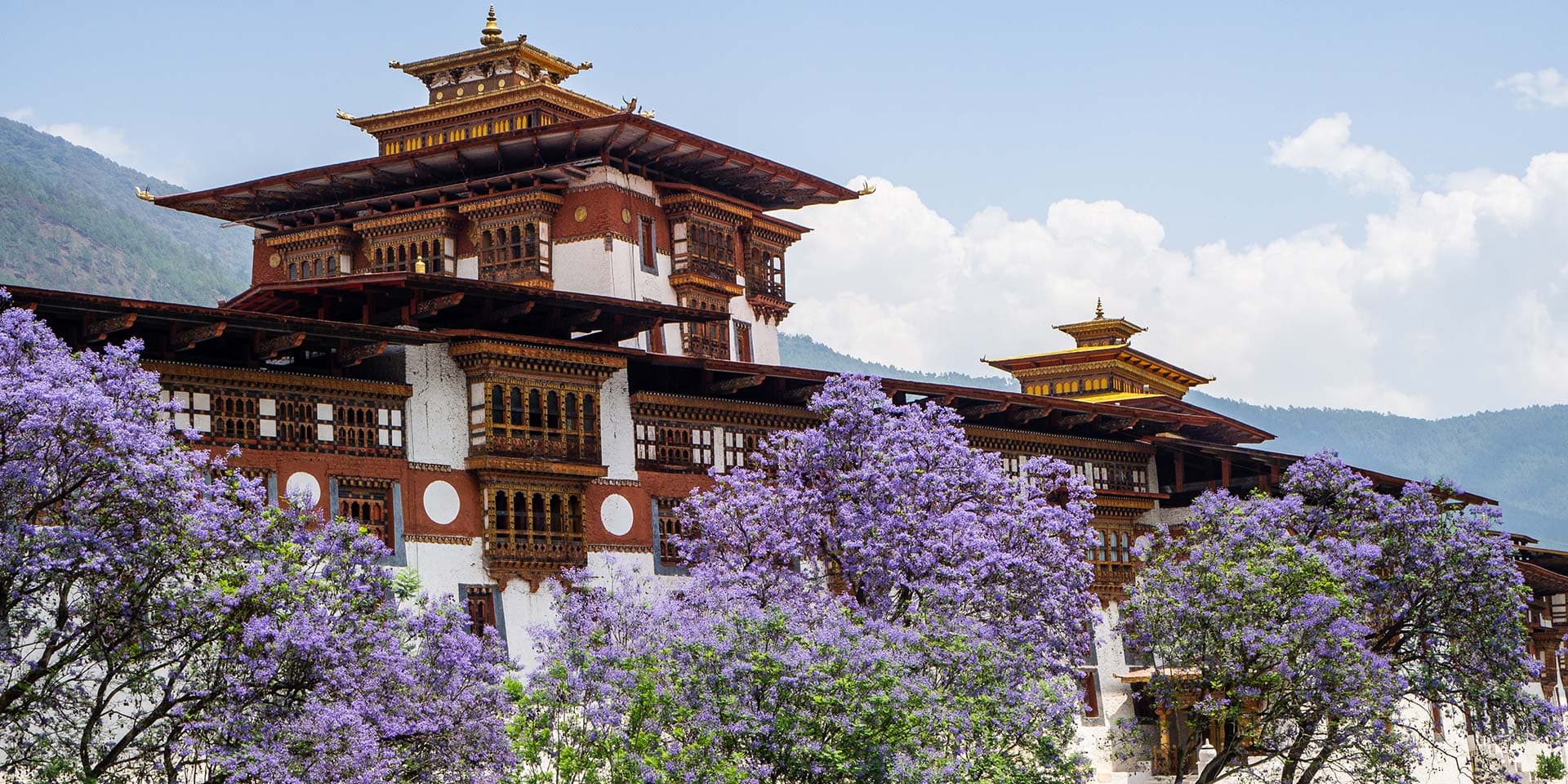 For anyone even slightly familiar with the small mountain kingdom of Bhutan, the Tiger’s Nest Monastery is usually what comes to mind. Upon visiting the predominantly Buddhist country, however, one soon realizes the all-important status of the dzong.

Dzongs are traditional Bhutanese fortresses, built across the country during the 17th century as a defence against impending attacks from Tibet. They are uniquely constructed, with no iron nails to hold them together, as well as being decorated with traditional Bhutanese woodwork and intricate art. The dzongs have served many purposes over the years. Many were originally Buddhist temples before being turned into fortresses and bastions. Today, they are predominately administrative offices and religious residences, as well as being homes to museums and cultural stages.

There are, of course, innumerable dzongs throughout Bhutan, but there are three must-sees on the Bhutan circuit.

ABOVE: It may not be Bhutan’s grandest dzong, but it is one of the best examples of traditional Bhutanese architecture.

Flying into Paro, the country’s only international airport, it’s impossible to miss a fortress-like structure jutting out from the hillside and overlooking the quiet city below. It may not be Bhutan’s grandest dzong, but it is one of the best examples of traditional Bhutanese architecture.

The front entrance of Rinpung Dzong, as it’s officially known, is adorned with a traditional, wooden cantilever bridge that is even more enchanting when monks and locals in traditional dress pass each other on their way across.

The iconic central watchtower looms above the surrounding structure, as a strategic architectural component common to all dzongs across the country. Many of the shrines inside the dzong in Paro are closed to the public, but the paved courtyard outside is the stage for one of the country’s most popular religious festivals known as Paro Tshechu held yearly in Spring.

One of Bhutan’s biggest tourist attractions, Punakha dzong is arguably the country’s most beautiful fortress. It’s the second oldest as well as the second largest and even served as the home of the central government until 1907.

Similar to Paro, the large complex is entered via a traditional wooden bridge, however, the Punakha dzong is really quite unique. It has three large courtyards inside, instead of the usual two, and the central watchtower stands significantly higher due to the dzong’s low lying position.

ABOVE: Inside Punakha Dzong.

It’s superior location adds to its beauty and importance, as it sits at the intersection of the two major rivers in Bhutan, known as the male and female rivers, and is seen as a symbol of the country’s unity. The complex is also encircled with Jacaranda trees which bloom a brilliant lilac in Spring, making it the best time of year to visit.

The white washed high walls of the dzong offer a picturesque backdrop to the lilac flowers and red robed monks, whom you can find wandering the compound in deep reflection. However, the prime attraction in the dzong is the third courtyard, which is home to the main temple and the hundred pillar assembly hall.

The detailed and colourful murals painted on the walls inside provide an insight into the history and beliefs of Buddhism in Bhutan, slightly different to what is practiced in nearby Tibet. A traditional painting you will find in almost every dzong in the country is of the elephant, monkey, rabbit and bird, known as the four friends. Signifying a perfect balance of cooperation and dependence on each other and nature, it is one of the most popular Bhutanese artworks and considered representative of the country’s national values.

For those with extra time, it is possible to explore further eastwards to Trongsa, a strategically located town overlooking the deep valley of the Mangde Chhu, one of the major rivers in Bhutan. Approaching this central district of Bhutan, you can view the dzong on each sweeping bend of the quiet national highway as it snakes its way around the valley’s pine covered slopes.

The old fortress sees much less tourists in comparison, despite it being one of the most important in history. It was the seat of the powerful dynasty that ruled Bhutan before the 20th century and even today, the King traditionally has to become the governor of Trongsa first, before taking the throne in Thiumphu.

It’s perhaps one of the most enjoyable dzongs to visit, as its grandeur nature can be appreciated with little disturbance other than the occasional local visitor or troublesome monkey. The high, sweeping walls and layers of intricately carved woodwork leave a lasting impression as a truly unique aspect of Bhutanese architecture.

The nearby watchtower also houses a fantastic museum with royal memorabilia and Buddhist artwork, as well as a far-reaching view of the dzong and valley below.