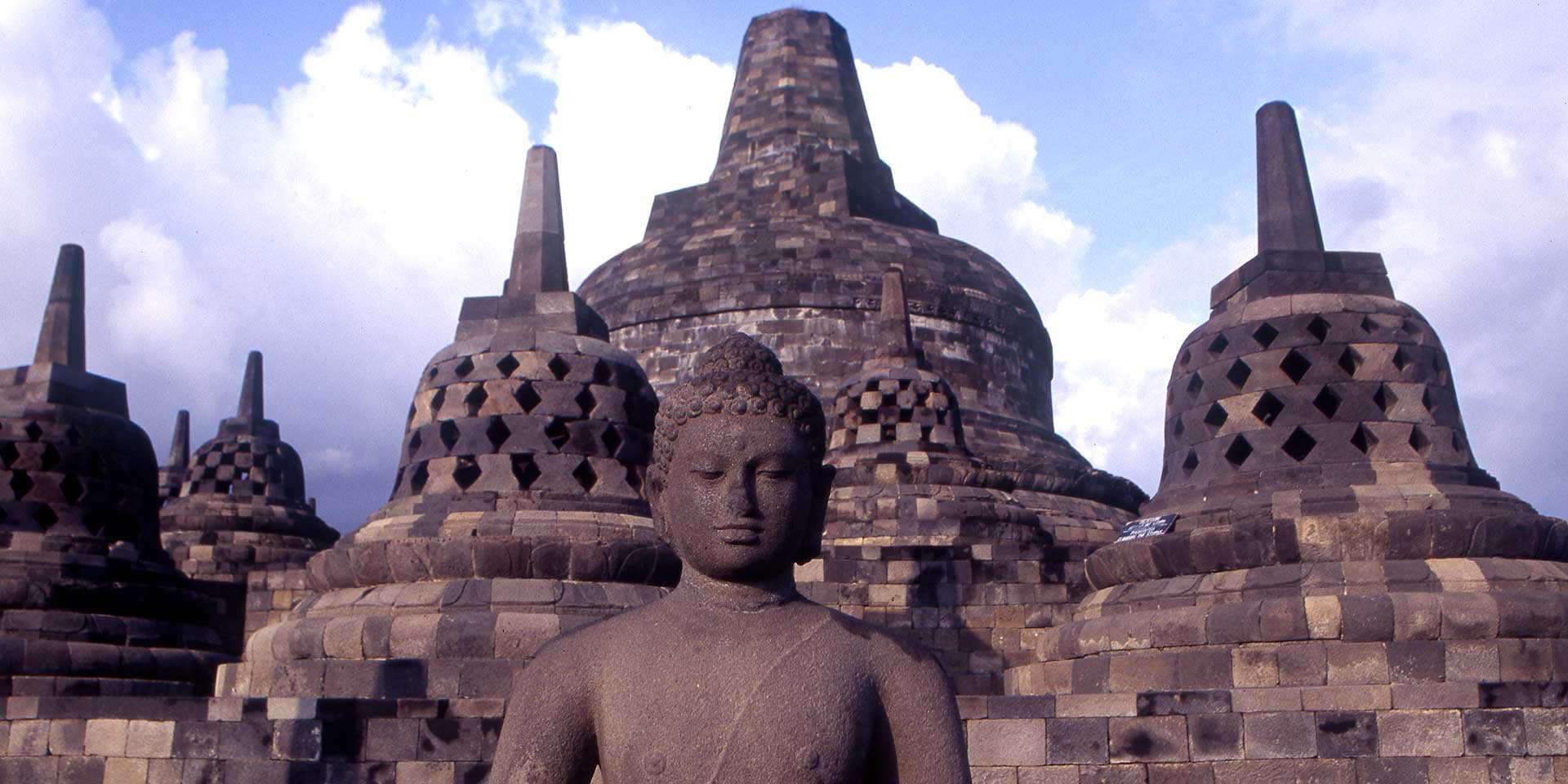 March came and Borobudur beckoned.  It would not be my first visit, but it drew me to return once again. Once arrived, I headed to my hotel –  the Amanjiwo Resort,  not far from the ancient temple site.  This resort is one of the best in Asia, if not the world. Amanjiwo features a perfect location, caring staff and an informed management who are keen to help guests get the most out of their time in the historic area.

Remembering the truly marvelous sunrise over Borobudur, I awoke at the ungodly hour of 4:30 a.m., which certainly didn’t feel very magical at the time. But just as small children are eager to wake up for Christmas morning at such hours, the sense of anticipation propelled me forward.

I was extremely fortunate to be blessed with perfect weather — a crisp, clear morning sky with clear views of surrounding volcanoes was laid out before me. I was also lucky enough to be one of just a handful of people around at this time, unlike throughout the rest of the day when buses full of tourists descend upon the area.

With my expert guide on hand, information about every conceivable nugget of historical importance was readily available to me. This was not, however, an academic experience per se. This was not knowledge from a book or a university lecture. This was living history in front of me – carved in stone. I was content to merely stand in awe of the scenery unfolding before me in the shadows of this great ancient achievement. After an hour or so of walking through the temple, we got in our car and drove to a nearby hill, which boasted a perfect view of Borobudur in the distance. Breakfast was served Aman-style, impeccably-presented in the peaceful setting.

Borobudur is a shrine to the Buddha and is the site of various Buddhist pilgrimages. It features more than 500 life-sized Buddha statues crafted from a single stone. You can see stunningly clear views of Central Java from this vantage point. Amidst the sounds of waking birds, the dawn mist lifts to unveil the surrounding splendor of the main volcanoes Merbabu and Merapi, and terraced rice fields. Added to this panorama is the Dieng Plateau and its ancient Hindu temples.

The Borobudur monument itself is a troika of various cosmological forms: first, a Buddhist commemorative with holy relics, a temple mountain linked to the Hindu myths of Mount Meru and the Buddhist symbolic interpretation made manifest in regard to the mandala which is a geometric conundrum pairing heaven, represented by a circle, with the Earth, as a square. A mandala holds sacred the belief that certain geometric shapes contain important esoteric knowledge that can be deciphered by holy priests or other seekers. This is not unlike the “Bible Code” as promoted by Christians and Jewish students who claim to have found “secret” revelations in the math and science within its pages.

The structure came into being in the 6th century A.D. By the time of the first crusade in Europe, this place was covered in volcanic ash. An Englishman named Thomas Stamford Raffles stumbled across Borobudur’s grounds shortly after the War of 1812, and the Dutch later undertook the project of its excavation around the turn of the 20th century. Just who discovered this magnificent place? Some claim it was the Dutchman Cornelius De Houtman in 1817. Back then, Borobudur was ensconced in dirt. Raffles and De Houtman probably would have had to work together in order to reclaim Borobudur from centuries of neglect.

Borobudur has three main levels, each representing various stages of the Bodhisattva’s enlightenment. As such, visitors can make a pilgrimage to this place, beginning at the eastern stairway and moving clockwise around all nine levels of the structure. Nine is a mystical number in Buddhism. The lower levels of the structure contain reliefs showing Earthly desires to be overcome. These are known as kama-dhatu and are the underworld of sorts of the Mahayana Buddhist universe. Other levels show events which challenged Gautama Buddha and the Jatakas, which are the tales of his previous living incarnations. The upper level shows the arupa-dhatu exemplifying the concept of being in a state of detachment from the cares of this world: the flesh, the pride of life and the lust of the eyes.

One very special activity is a gourmet picnic breakfast in view of Borobudur. This place is important: it is the most vital monument in all of Indonesia and the largest Buddhist temple anywhere on the planet. Breakfast enjoyed with an unobstructed view of this wonder is a relaxing compliment to an early visit to the monument.

Tours are available through the Borobudur area by traditional horse-drawn carts known as “andongs.” Elephant safaris are also sometimes possible around Dagi Hill. Hiking and cycling are also excellent options. At Borobudur, great adventures are not only possible, but probable. Bring your camera.