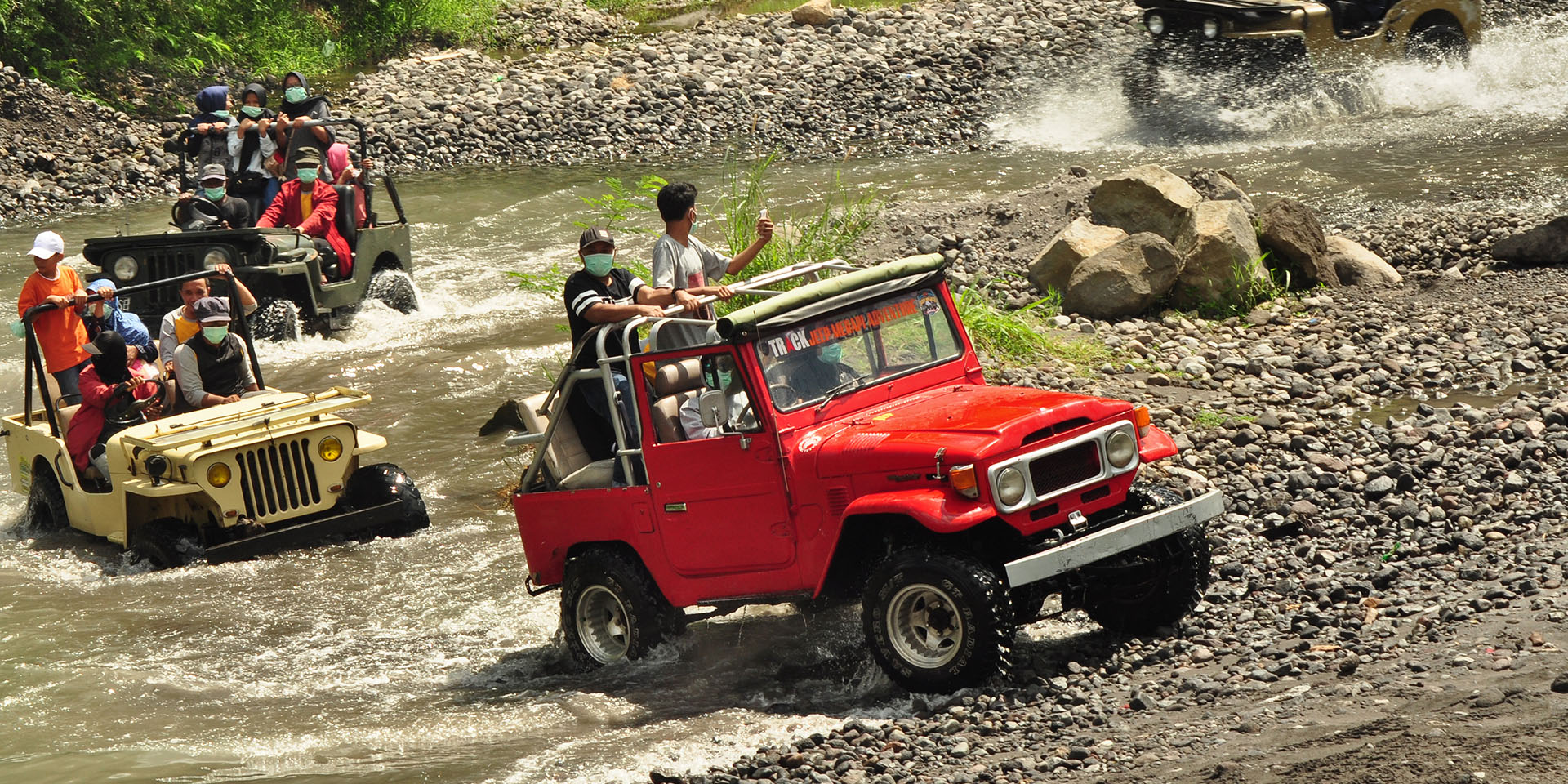 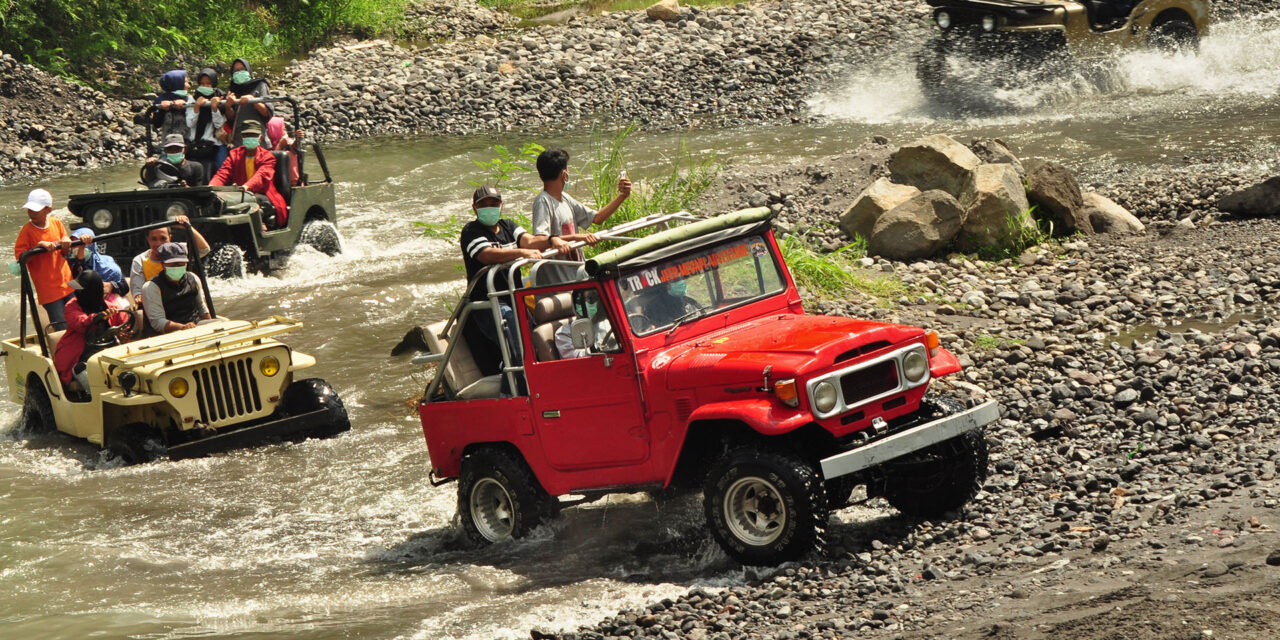 There are too many people who get to Yogyakarta, drive to Borobudur, set down stakes at Amanjiwo, and call it a holiday. Carved by rivers, punctuated by active volcanoes, and steeped in history and culture, there’s so much more to do in and around Yogyakarta. For the adventurous there are kayaks and 4x4s, and for the mindful there are temples and castles.

ABOVE: Vehicles make their way through streams as they climb Merapi.

Travelers seeking adventure on four wheels can hop in a jeep and take a Jurassic Park-style off-road adventure on the slopes of volcanic Mount Merapi. An alternative to the typical cultural tours, the Lava Tour of Merapi is a thrill-seekers guide to the area. Following a five-minute ride through tamer roads, the lava-laden area begins. Riders will speed along muddy roads, crash through puddles, and drift over the remains of the last Merapi eruption in March 2014.

The two-hour tour isn’t for the faint-hearted, and guests can expect to get a little wet and muddy while visiting some of the not-so-mainstream sites such as the Museum of Memory of Merapi, the Mass Tomb, and the former bunker area for population protection when the volcano erupted. Visitors might also spot superheated steam brewing from the lava, still brewing three years after the eruption.

Rafting and Kayaking on the Elo River

ABOVE: Rafting down the Elo River in a group.

The Elo River in Blondo Village, Magellan City, allows travelers to maneuver rafts in Grades 2 and 3 rapids against a dense forest backdrop. Groups of one to six can kayak or raft the 7.45-mile-long river, which takes about two and a half hours.

With stable and relatively safe cascades, rafting the Elo River is an ideal activity for families or groups of varying skill levels. Experienced river guides detail challenges such as navigating the rapid current and avoiding the large rocks within it.

ABOVE: The Elo River runs through Javanese rainforest.

Rafters learn the basics – how to put on a safety vest, paddle in white water – and the not-so-basics: what to do if someone falls out of the raft. Because the river flows through an exotic forest, guests can expect to spot monitor lizards, colorful birds, and a wide variety of wild exotic flora and fauna. The river also runs near sites like the Borobudur Temple, Chicken Church, and Setumbu Hill, which the rafters can spot from the water.

ABOVE: View at the Taman Sari Water Castle.

The Taman Sari, also known as Taman Sari Water Castle, is a former royal garden of the Sultanate of Yogyakarta. A luxury water castle used by the sultan for bathing and swimming, it remains a rich reminder of unique Indonesian culture, namely that of the sultan and his concubines. The site highlights an important historical narrative of the country and gives travelers a peek into the life of the royal family.

The complex is composed of around 60 buildings, which include meditation chambers, watchtowers, and pavilions. The watchtower was first used by the sultan to look down at his pool full of concubines and choose which one would join him at the private pool behind the tower. Growing throughout the grounds of the castle is the Kepel fruit, a rare variety that alters the smell of urine after consumption. Kepel fruits were believed to be the secret weapon the queen used to maintain the sultan’s love, despite his many wives.

A unique architectural combination of Hindu, Buddhist, and Portuguese influence, guests can roam about the building and explore secret chambers and underground passages – once used by the royal family as an escape route – and climb the highest building for a panoramic view of Tamansari.

ABOVE: Amanjiwo from above.

For the active traveler looking to experience Borobudur a little differently, cycling from Amanjiwo to Borobudur offers the opportunity to view the hilly countryside, rice fields, and local dance performances firsthand.

Cyclists are urged to start their trip at dawn to watch the sun rise behind blue pine forests. The two and a half hour trip takes travelers through villages, agriculture farms and rice fields, providing the opportunity to watch locals at their crafts, such as batik (a traditional cloth-dyeing method), wayang (puppet carving) and making traditional Javanese clothes.

ABOVE: Borobudur from afar.

Along the path, travelers can discover the temples of Kedu Valley and practice semadi, a silent Javanese meditation, or attend a fortune-telling session with a palm reader. The path ends at the Borobudur Temple, a UNESCO World Heritage Site., where cyclists are encouraged to climb to the highest level of the temple to welcome the sunrise with uninterrupted views of Magelang and the surrounding area.

ABOVE: Vista of Prambanan.

Built in the 10th century, the Prambanan Temple is the largest temple compound in Indonesia dedicated to Shiva, one of the principal Hindu deities. This 154-foot-tall temple was built to honor Brahma, Vishnu and Shiva and is a dedicated UNESCO World Heritage Site.

Visitors can walk through the spacious park surrounding the temple, where the highest central courtyard consists of eight large shrines and eight smaller ones, each with beautiful carvings containing spiritual statues inside. A traditional Javanese dance performance takes place every night of the full moon portraying the epic Ramayana story on stage, providing travelers an inside look at Hindu beliefs and Javanese culture.