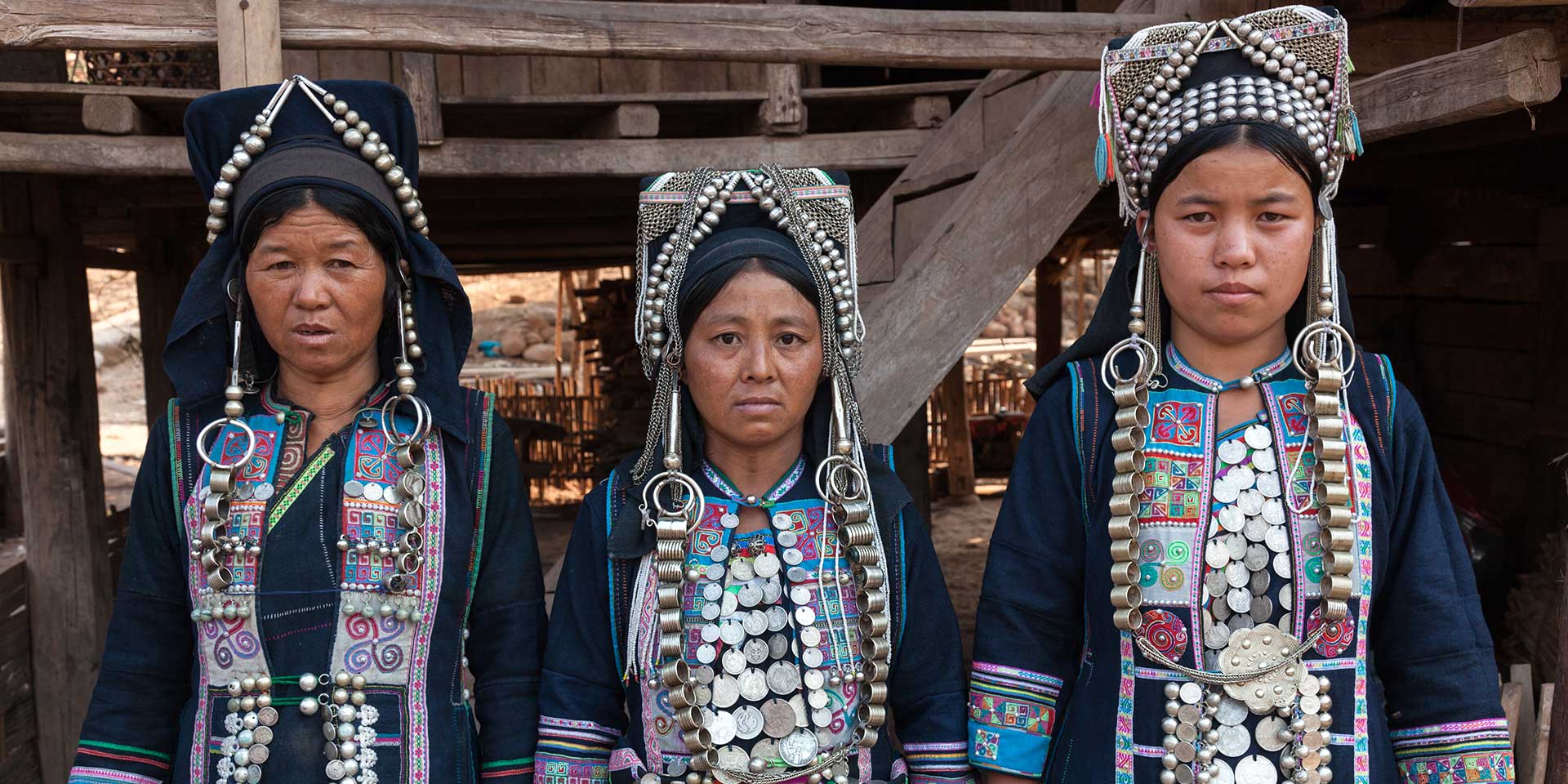 My trip to the unique Lao destination of Phongsali was one of the most incredible tribal experiences yet. Pleated mountains and vast viridescent plains create a stunning backdrop throughout the province and everywhere we travelled brought more and more compelling scenery, adorned beautifully by expressive faces of tribal members I had the great fortune to encounter along the way. The fascinating people dotting the Phongsali countryside truly made my trip. They gave me an extraordinary insight into their lives, leaving me with exceptional experiences and vivid memories.

Commencing my journey in Luang Namtha, I drove three hours to my first Akha Ghepia village near Boun Tai, in Phongsali province. These tribes are renowned for their distinctive clothing style and are typically covered with swathes of necklaces and silver decorations. I met the village chief and asked for permission to take photos of the villagers. Looking around, I noticed that 10-15 inquisitive children were following my every move, although they quickly scattered when I pointed my camera at them. I managed to steal a few shots, and after showing the children, they excitedly posed for more. The village women were also very hesitant to have their photos taken, quickly hiding as soon as they saw me, although I did manage to sneak a few shots in.

Driving to another Akha Ghepia village, we met a woman in her home chopping sugarcane. One of the local men, although slightly inebriated, offered to take us around the village and helped us capture some photos of the women. As with the previous village, I was surrounded by wide-eyed children and the women fled the moment they saw my camera. Eventually, a group of women were willing to pose for photos and almost 40 people gathered round to watch. It was an incredible experience, and I could feel the excitement in the air from the enthusiastic villagers.

Leaving at around 5:30pm, we headed towards Boun Tai, stopping at another Akha Ghepia village en route. The first sights we saw here were a guy dressed in traditional clothes on a motorbike, holding his baby, and a drunk man dancing around in the street. Further into the village, we saw a group of women returning from the field; one quickly ran away when she spotted us and five happily chatted to us while posing for photos.

We drove for another two hours, finally arriving in Boun Tai at around 7:30pm. This small district was once a French military outpost and is currently a business center, mostly with mainland China which is only 22 miles away. The town is dominated by mainland Chinese workers and ironically, the Lao seem to be a minority here. We checked into the “Hong Thong Hotel” for a much-needed rest. It was the best in town and we appreciated the cleanliness, hot water, and air conditioning, although it could have done with a little redecoration.

Leaving the hotel at 8am, we drove into the hills to visit an Akha Ghepia village there. Along the way, we saw a Hmong lady selling bamboo rats – a favorite snack amongst the locals. The first woman I saw upon arrival at the village was very hostile about having her photo taken, threatening to throw a rock at me. She claimed the photo would make her sick, illustrating how superstitious these animist people still are. The next woman we came across was much more approachable and eagerly demonstrated her traditional Akha weaving technique.

Next, we headed to a Hmong village, built on the slopes of a steep hill.  I quickly noted that this village was more organized and cleaner than the Akha villages.  Many of the children also spoke Lao and were less shy. We met a few elderly women in their homes who happily posed for photos and spoke with us.

After spending some time with the Hmong, we stopped at another Akha Ghepia village. Once again, most people ran away upon seeing my camera, but a friendly old man showed us around and introduced us to two women who gladly posed for photos. We stopped for lunch and a group of four Hmong women asked us for a ride to their village and we agreed as it was “on the way”. Unfortunately, it turned out to be 18 miles out of the way, but we sympathized with them and took them anyway!

Backtracking for almost an hour, we headed towards an Akha Oma village. These villagers have a distinctive traditional dress style, with colorful costume and embroidered headwear that differed from the Akhas we had already seen. They wear their colors with pride, showing conformity to their tribe. This village was also notably cleaner and far more organized than the other Akha villages that were quite dirty in comparison.

We quickly met a friendly elderly lady who was caring for her grandchild. At first she too was reluctant to have her photo taken, although when she saw her pictures, she was absolutely thrilled and thanked me! We took some time to explore the village with a friendly senior gentleman, who led us around and introduced us to the families. Most women ran away from the camera, with a terrified look in their eyes. Entering one home, we saw a woman weaving from a standing position, differing from the others we had seen, and she agreed to let us take some photos. We continued to walk around the village while the locals returned from their farming duties and took some more snaps.

We left the village and stopped by another nearby to drop off some photo prints my guide took on his last visit. The other villagers became jealous when they saw the prints and immediately asked me to take their photos as well. This time, everyone was keen on having their photos taken rather than running away! We then drove the two hours back to our base in Boun Tai.

We departed from Boun Tai at 8am and headed towards an Akha Pusho village, where I was surprised to see a collection of large, new homes – a stark contrast to the ones in the other villages. Once again, the women were very apprehensive and ran away from my camera. After walking around the entire village, we finally found the village chief, who agreed to help us meet some women in traditional attire. We photographed two shy women before they ran away. It was the first time they had ever been photographed. We set off again, following our GPS down a suspiciously bad road until we finally reached a dead end! Somewhat discouraged, we spoke to some workers from the Lu tribe and were pointed in the direction of another village, just 10 miles away. We reached an Akha Nouheau village and straight away we knew we had discovered something special; the people here were even more camera-shy than before and I later discovered that we were the first foreigners to ever visit!

We found the village chief and entered his home, where he and his family were watching Thai TV. Surprisingly, the children spoke some Thai but no Lao. Feeling peckish, we bought one of their chickens, which the chief then slaughtered for his daughter-in-law to prepare. The chief then arranged for a group of  women to pose for photos. We were now the main attraction in the village, surrounded by about 40-50 people, mesmerized by the first foreigner they had ever seen. I learnt that none of these women had ever had their photos taken before, so I felt privileged to have been the first. Night was beginning to fall so we left shortly after and began the three-hour drive to Phongsali town and checked into the less-than-pleasant Phou Fa hotel.

I awoke at 6am to discover that there was no water in my room. After 45 minutes, I was finally able to shower in a trickle of water then swiftly checked out. We visited the small yet extremely interesting Phongsali museum then hit the road back to Boun Tai and an Akha Loma village. The tribe is known for its unique dress style, where married women don cone-shaped hats and young girls dress in brightly-colored clothing. Most of the tribes in the Phongsali province are still very animist, and we passed a spirit gate with a dog head hanging on it, presumably to ward off evil spirits.

Once again, I was quickly surrounded by around 70 villagers, not accustomed to seeing foreigners. Surprisingly, two women agreed to let me take their photo while the whole village watched. In an attempt to break the ice, we handed out some candy which was eagerly accepted by the boys but refused by the girls, even from the Lao guide.

We then left the village and continued two hours to Muang La and checked into the beautiful Muang La resort. It is one of the best resorts outside of Luang Prabang and offers a pleasant stay in elegant surroundings. Unfortunately I was only able to stay for 12 hours before heading to Luang Prabang by boat the following morning. Muang La is a stunningly-relaxing destination to relax for a few days and there are several interesting Akha villages in the area.

Laos remains a country of solitude, away from the demands of modern-day life. The forgotten tribes keep themselves well hidden within the unmistakable landscapes of Phongsali and keep their ancient traditions alive.