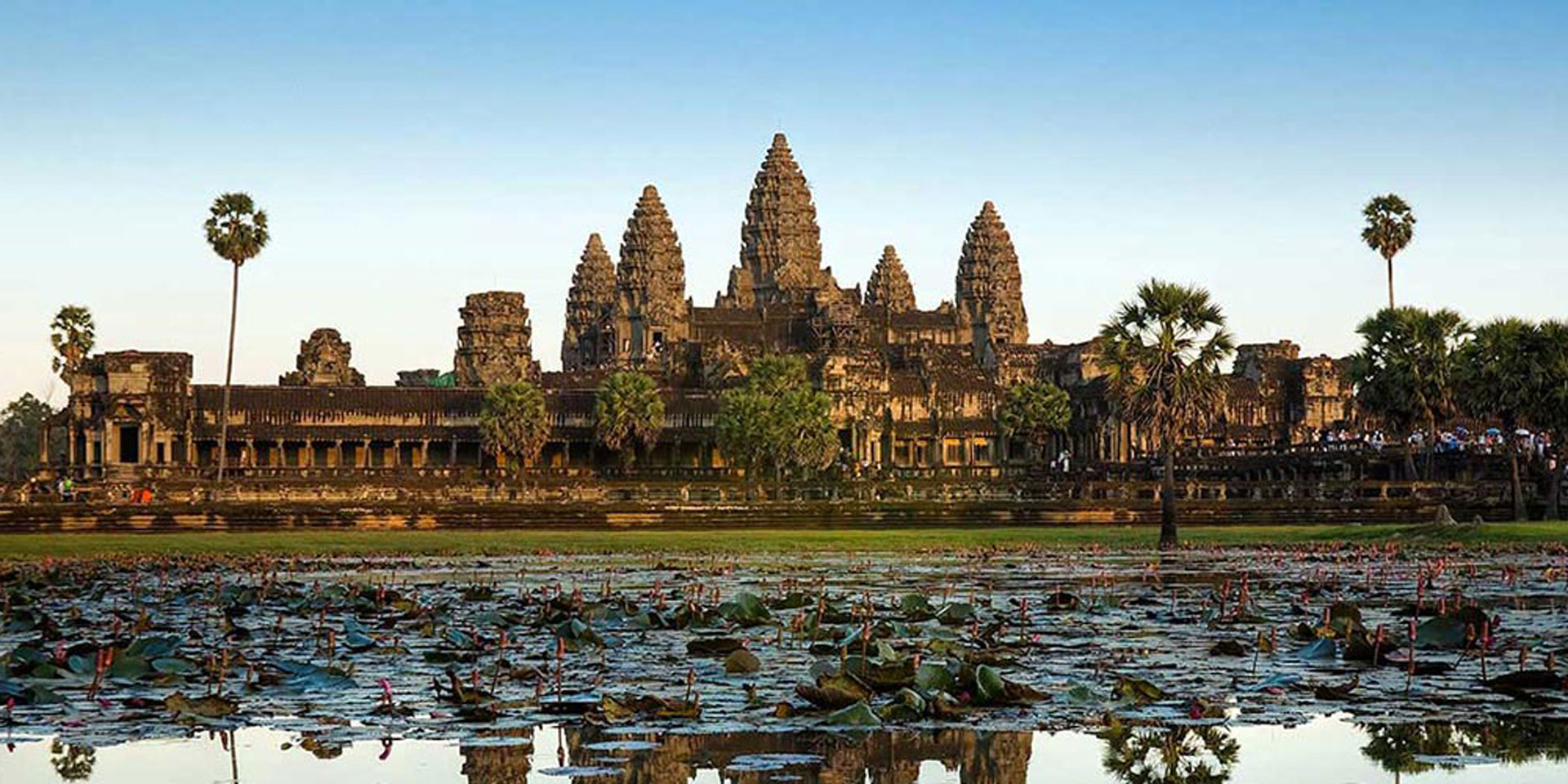 A trip to historic and fascinating Cambodia can be a whirlwind of sensations: from the mystic temples and the vibrant cities to the dramatic countryside – not to mention the country’s tragic past – there is a lot to take in. But a well-balanced itinerary covering the numerous historic and spiritual marvels, combined with a chance to experience the traditions of healing and self-examination, can make for a mind-opening and life-changing adventure. Let us help you craft your journey of wellness, spirituality and self discovery in Cambodia.

Revel in the jaw-dropping beauty of one of the seven wonders of the world; one of the best ways to find yourself is to lose yourself in the marvels of amazing Angkor Wat. Explore Angkor Archaeological Park, where the magnificent remains of the long-lost Khmer Empire are protected by UNESCO for their enormous cultural, religious, artistic and symbolic values. This once-mighty empire, which was instrumental in the political and cultural development of the whole region from the ninth to 15th centuries, is now enshrined in these awe-inspiring structures.

Discover the magnificent temples of Angkor Wat itself with an expert guide and be amazed at the work that went into the intricate details and elaborate architecture. Its conception is the stuff of legend – perhaps constructed by Indra for his son Precha Ket Mealea, or built in a single night by a god. Historians favor the tale that Khmer King Suryavarman II built it as the state temple of the capital of the Khmer Empire in the 12th century, and unlike previous kings who prefered Shiva, he dedicated it to Vishnu. Over the centuries, it has become a place of worship for Buddhists and remains a sacred religious center to this day. As you marvel at the spectacular bas relief carvings, you can track the shift of religion in Cambodia. Historically Hindu, the country is now considered generally Buddhist and most Cambodians practice Theravada Buddhism, though the Chinese population may follow Taoism or Confucianism and there are pockets of Christians and Cham Muslims.

Continue your exploration of the park with visits to unmissable stops like Ta Prohm and Bayon Thom. The former – made famous by the movie, Tomb Raider – was built throughout the 12th and 13th centuries before it was abandoned in the 17th century at the fall of the Khmer empire, to become dramatically overgrown and entangled by the roots of the encroaching jungle. While exploring its towers, courtyards and corridors, which have been almost strangled by the unstoppable power of nature, you get a sense of the awe and wonder the European explorers perhaps felt when they rediscovered this breathtaking treasure. Built around the same time, Bayon Thom is distinctive for its carved faces, smiling peacefully out from around its towers. More carefully maintained than Ta Prohm, you can appreciate the elaborate workings of the carvings here and study the finely-wrought scenes and frescoes.

Just a short drive outside Siem Reap, you will find Banteay Srei, a 10th-century temple dedicated to the Hindu god Shiva, miniature in size compared to Angkor and yet no less intricate in its design. Its sculptures, reliefs and towers are built from red sandstone and some refer to it as the “jewel of Khmer art”. Consider a visit to Beng Mealea; left unrestored and at the mercy of nature, it has the Indiana Jones-style atmosphere of Ta Prohm, without the crowds of tourists. Koh Ker, meanwhile, is a sprawling temple complex of about 50 structures. Built in the 10th century, this lost city was the Angkorian kings’ last seat of power before they relocated to Angkor Wat and it centers around a Mayan-style pyramid – a replica of mythical Mount Meru. Complement your discovery of ancient spiritual wonders with a foray into nature and take a relaxing cruise on Tonle Sap, the largest freshwater lake in southeast Asia. Immerse yourself in the tranquility of the glassy water, fringed with rich and exotic flora, and enjoy the scenes of local village life as they float by.

While Siem Reap draws the most tourists for its breathtaking temples, it is not to say Cambodia’s historic and spiritual heart cannot be discovered elsewhere. A short drive outside capital city Phnom Penh leads you to Kampong Cham, home of 12th-century temple, Nokor Bachey. Built of sandstone, it has been partly restored over time and contains numerous carved statues and characters. It is a good deal more peaceful than its counterparts in Angkor and a leisurely stroll through the grounds can be a true exercise in meditation. What’s more, it is surrounded by beautiful countryside and nearby you can take an easy hike amid male and female hills, Phnom Pros and Phnom Srei respectively, and climb up Han Chey Mountain to take in a breathtaking sunset.

Journey to the Thai border and hike up Dangrek Mountain for spectacular views of Cambodia’s neighbor and pay a visit to the contentious temple, Preah Vihear. Now protected by UNESCO, this pre-Angkorian wonder is claimed by the governments of both countries and known to Thais as Prasat Phra Viharn.

Two hours north of Siem Reap, you will find Phnom Kulen – the mountain ridge itself and the the national park which is designated to the area. One of the most historically significant places in Cambodia, you can still visit the ruins of the ancient capital Mahendraparvata and there is something very compelling about standing on the site where one of the most powerful empires of all time was born. Besides its historic significance, Phnom Kulen is worth exploring for its spiritual and natural beauty. Delve into vast caves and stumble across huge stone elephants, see carvings in the bed of a holy river and marvel at Preah Ang Thom, a 60-foot reclining Buddha carved into a rock face.

With Buddhism at the heart of its culture, not to mention gorgeous scenery and these mind blowing sacred spaces, Cambodia is an ideal destination for introspection, self discovery and finding some time to get realigned. Both in and around Siem Reap, as well as near the beach in Sihanoukville, are numerous yoga and meditation retreats where you can take time to reflect on your experiences and the sights you have seen, to make your trip an even more holistic and transformative experience. Discover the teachings of Buddhism, do a little soul searching and regain some balance and peace with yoga, meditation and healing therapies. Beautiful Amansara is the perfect sanctuary to relax and recalibrate. This gorgeous property, located between Angkor Wat and the colorful, vibrant action of Siem Reap, once welcomed the esteemed royal guests of King Norodom Sihanouk and now welcomes those seeking peace and a little relaxation. Set in a tranquil garden oasis, the pool is surrounded by lush foliage and the spa offers reinvigorating treatments, which draw on classic Cambodian techniques. Wake up each morning for a yoga session on the verdant roof garden, amid tropical plants.

For an oceanside retreat, venture to the golden, jungle-fringed coast of Sihanoukville. For the ultimate balance of health, wellness and barefoot luxury, sail off the coast, bound for Song-Saa Private Island, an eco-resort with a focus on maintaining harmony with the surrounding natural beauty. Here, you can gaze down into the crystal ocean from your overwater bungalow, explore the protected reef equipped with a snorkel or scuba mask and dine on authentic Khmer cuisine prepared with locally-sourced, organic produce. Here, the yoga center sits right on the shoreline, while the spa and wellness sanctuaries nestle in the rainforest.