Gettin’ Zighy With It 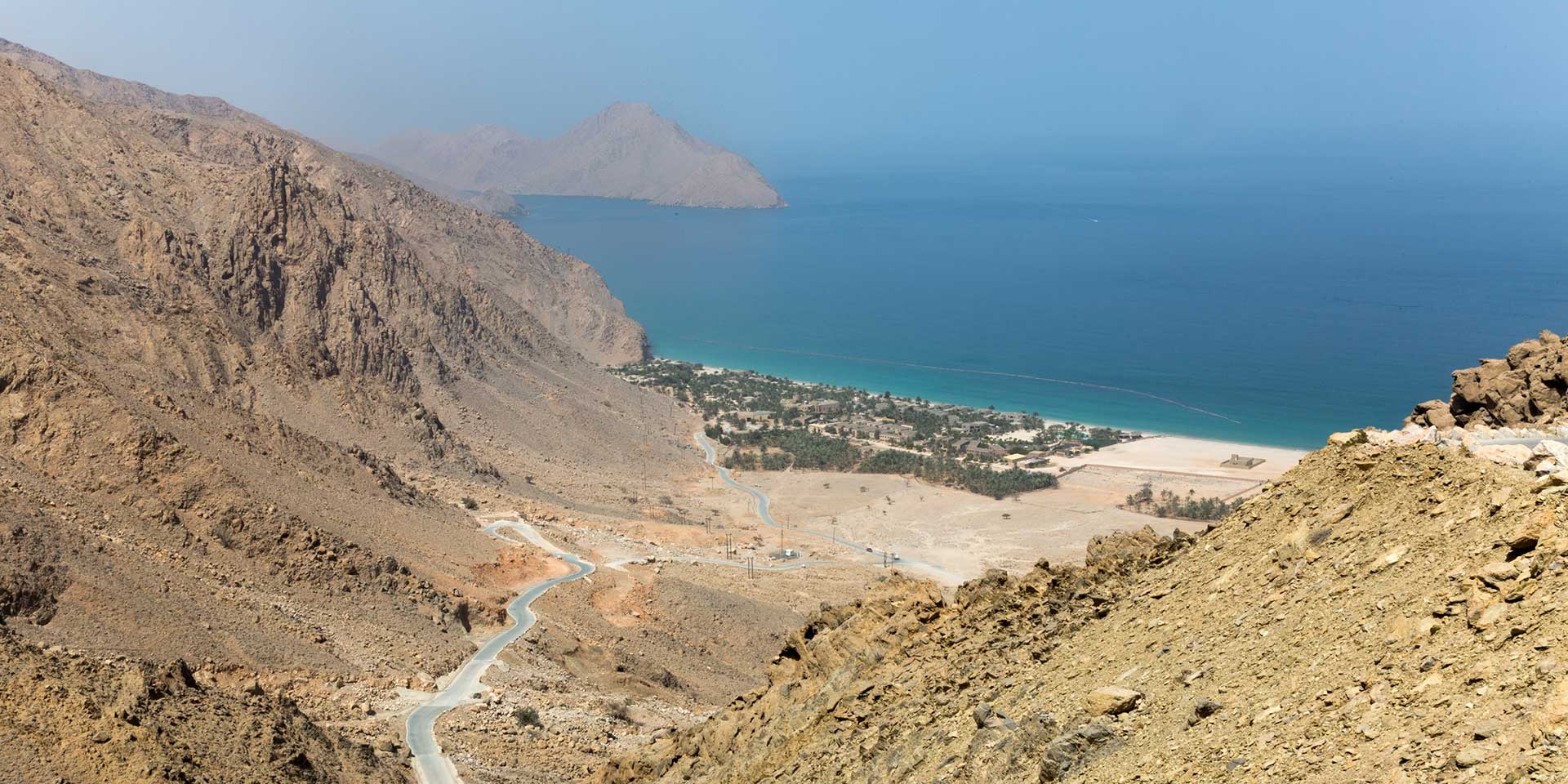 The arrival to my resort in Zighy Bay could only have been more dramatic if I had paraglided in – which, I later learned, is an option. We drove up to a viewpoint overlooking the resort and I watched as Zighy Bay – a sparkling turquoise beauty lapping upon soft golden sands, surrounded by the jagged cliffs of the Musandam Peninsula – unfurled before me. The hotel was as impressive as the scenery: Six Senses Zighy Bay is an integral part of any visit to this area; a luxurious experience that stays true to the Six Senses brand with traditional villas with rocks blending seamlessly into the surrounding area. A mosque on the coastline a short distance from Zighy Bay.

After having driven for two hours from Dubai through several Emirates (Sharjah, Ras Al-Khaimah, Fujairah), we transitioned from city to desert, as buildings were replaced by sand dunes and cars by camels and goats (and oh my were there goats!). The terrain changed dramatically, becoming dry, arid, and rocky, set upon a beautiful coastline. Upon check-in, my time in my exquisite villa was cut far too short, however, because of my desire to get out and explore the area in the afternoon. The pier near Zighy Bay near sunset.

As the sun descended towards the horizon, casting an awe-inspiring orange glow across the glassy water, we boarded our speedboat and cruised down the rocky coastline to the port of Daba. Here, we came upon a small, bustling fish market full of  fishermen and hawkers from Bangladesh eagerly trying to make a sale to the Omani customers who were perusing their wares. They cautiously permitted me to snap a few photos – obviously not accustomed to having their pictures taken. Sharks large and small were laid out as fresh catches of the day.  The market wasn’t huge and we didn’t stay long. On our way back to the resort, we stopped briefly to explore some of the interesting rock formations for which Oman – and particularly Zighy Bay – is so famous. I saw more than 100 sharks, large and small, at the Daba fish market. This charismatic Omani was one of the few at Daba who agreed to let me photograph him.

In the evening I enjoyed a swim in my private pool before a nice meal at one of the resort’s restaurants, and then headed to bed ahead of an early morning start the next day. The stark mountains of the Sabatyn Plateau were an incredible site.

And oh was it early – I was showered, dressed, and leaving the resort by 6am for a four-wheel drive excursion to the Sabatyn Plateau. The jeep wound its way across the extremely rocky countryside that often cut straight through the mountains over the course of two hours, stopping occasionally to chat with locals. We learned of a man who lived alone atop a nearby mountain, and my guide called up to him. I didn’t think much of it until we met him on our way back an hour later. He told us that he hailed from Pakistan and had been living on this mountain in Oman for many years. I couldn’t imagine how lonely a life he must lead, but he was clearly happy there and was very friendly to us. This man, originally from Paksistan, has lived alone on top of a mountain for many years.

Our next stop was at an abandoned village with homes made of stone, and petroglyphs decorating the stone faces, but not a person in sight. It was the local wildlife that really struck me more than anything: not only were there more goats than people (and I therefore took on a new hobby of snapping goat portraits!), but at one point a fox ran across the road and scurried up the mountain. It happened far too quickly for me to be able to grab a photo but it was a real highlight for me nonetheless. The main inhabitants of the Sabatyn Plateau appeared to be goats!

Despite the animals, the plateau felt empty and cut off from the rest of the world. I found it difficult to imagine how challenging it would be to live here. Still, the scenery was jaw-dropping as we stood nearly 4,000 feet above sea-level, surrounded by rough mountains and rocks and desert sands and thrilling views of Wadi Al Bih as far as the eye could see. I could have stayed there for hours. Time was short though and we had to return to the resort not long after we’d arrived. The pier at Zighy Bay, which is the departure point for many of the resorts activities.

I didn’t have the time to try everything there is to do in Zighy Bay, but there are a few activities that I would highly-recommend to experience the full thrill of this exquisite area. What better way to explore the rocky relics than by rock climbing? You’ll be taught climbing techniques, belaying, climbing knots, and how to use all the gear on a fun half-day adventure. If my blog introduction caught your attention with the mention of paragliding, why not give that a try for yourself? Together with a professional paraglider, you’ll take flight from atop Zighy Mountain and you’ll zigh-zag over the mountain range, getting a bird’s-eye perspective of the stunning bay from above. If you’d prefer to stay closer to the ground, hop on a mountain bike and explore the rugged terrain on two wheels! Although the villas have private pools there is also a really nice resort pool. Visiting Zighy Bay is like a trip into an Arabian dream world, where Six Senses is home, the scenery takes your breath away, the people are sparse but friendly, and goats seem to rule the land. It’s an odd but wonderful experience that I recommend for everyone’s bucket list.