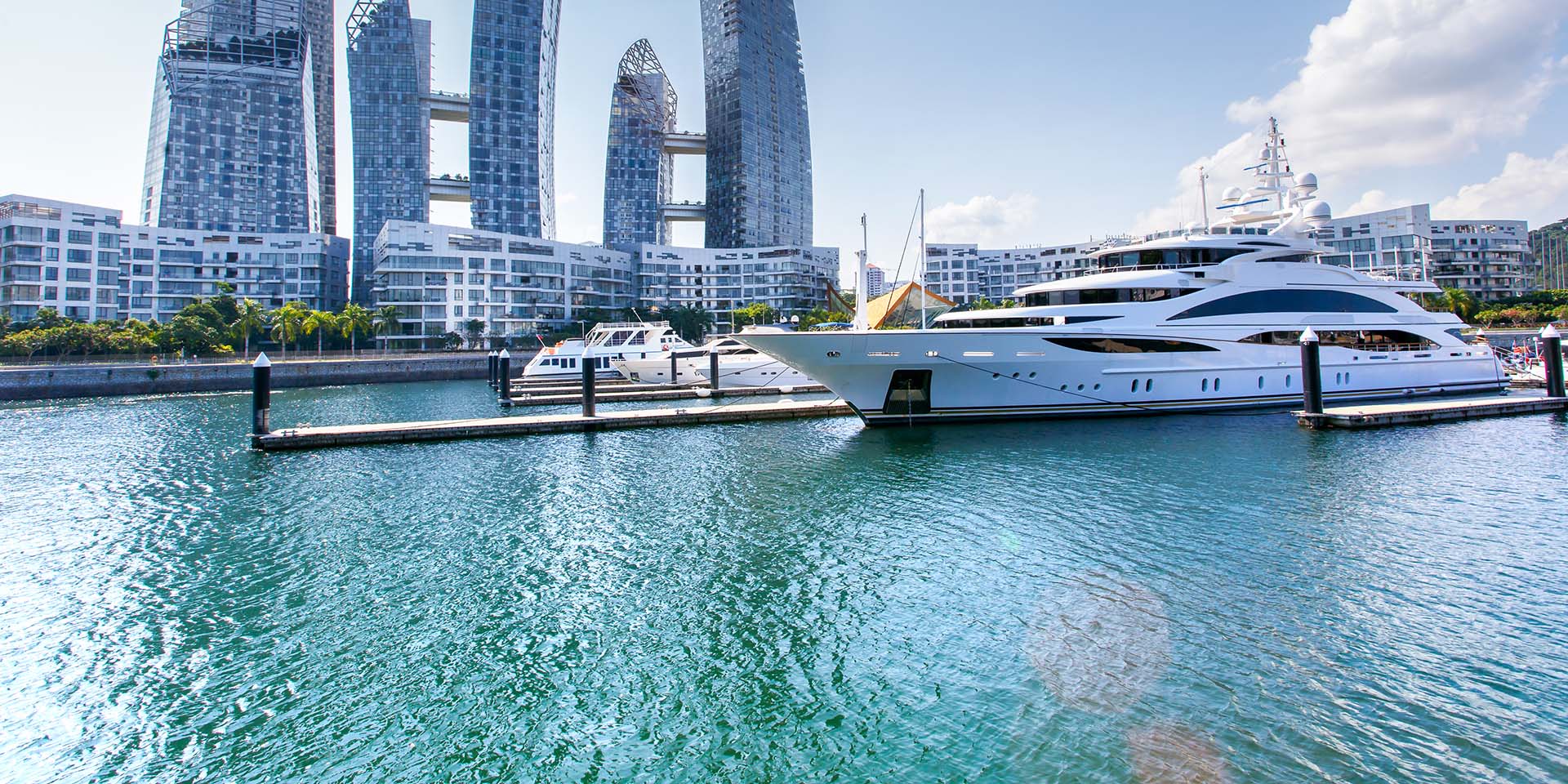 When in Singapore, sipping expensive cocktails and looking out over the skyline from the Marina Bay Sands, things seem about as decadent as they can get. Well, that’s wrong. Astute Singapore visitors will have noticed a not inconsiderable amount of yachts moored hither and thither.

A private charter yacht is the decadent Singapore experience – luxury resorts, hidden islands, and pristine beaches can be found quite close to the Lion City.

ABOVE: The beach at Lazarus Island near Singapore from a yacht.

Before heading off to the more natural and less decadent pleasures of Malaysia or Indonesia, Singapore has yachting destinations of its own to offer. The mainland, of course, is a melting pot of culture, full to the brim fine dining, exclusive rooftop bars, and high-class hotels. Before one sets sail, no visitor should go to Singapore without a Singapore Sling, a drink best had at its birthplace in the historic Raffles.

While most are moored at Keppel Bay, any decent yacht journey should begin at the ONEo 15 Marina Club in Sentosa Cove, grabbing a dose of the private club’s cocktails before setting out to sea.

ABOVE: Boats moored at ONE° 15 Marina Club.

The Marina Bay area, obviously, is a big hit with Singapore yachters – with an unmistakable skyline and a party that can easily be moved on shore. But there’s much more sea to see.

Just off the straits are the Sisters’ Islands. They’re tropical, have clear water, and come with a legend of pirates, gods, and sisterly love. The (abridged) story goes that a girl was kidnapped by pirates and escaped during a divine storm, trying to swim back to land, her sister went to meet her; both were lost but the islands remained. But, at just 39,000 square meters, there isn’t a whole lot to do on the Sisters’ Island, so it’s best as a day trip.

ABOVE: Kusu Island, found quite close to Singapore.

Kusu Island, on the other hand, is the place to go for your sea turtle fix. Indeed, legend has it that the island formed when a tortoise became an island to save two sailors, one Chinese and one Malay. Besides the Tortoise Sanctuary and Chinese architecture, just to the west of Kusu is Lazarus and St. John Islands, the latter of which can make for some interesting skyline viewing from the pier.

ABOVE: A curious leaning palm tree on a Bintam beach.

Batam will be the most likely first stop for Indonesian yachters looking to check out Indonesia, and while it’s a great stop for food, golf, and luxury hotels, it’s hardly an adventure.

Pleasure yachters will want Bintan Island. Luxury is a little harder to find – though the Sanchaya Bintan and Banyan Tree are perfectly respectable – but it’s more than worth it for the natural beauty.

ABOVE: Pool and ocean at Nikoi Island.

However, those willing to travel a little further from the Lion City absolutely must check out Nikoi Island: a 42-acre resort on a private island, just 8 kilometers from Bintan. With just 15 beach houses, this location is perfect for a honeymoon or a romantic stop from the private yacht.

ABOVE: Private villas on Nikoi Island.

With a restaurant, three bars, and two pools, this tiny private island is as close as one is likely to get to paradise that near Singapore. As to activities, the resort offers paddle boarding, massage, and sailing. Surrounded by coral, snorkel and dive sites abound, with March and April the best seasons for clarity. Keep on the lookout for turtles, stingrays, and octopuses.

Quite a few miles south from Nikoi is Cempedak Island, made under the same banner as Nikoi; it’s currently under development and features 20 villas.

ABOVE: Sunset on Sibu Island in Malaysia.

However, for the best snorkeling and diving anywhere near Singapore, yachters will need to head for the Malaysian destinations.

Heading up Malaysia’s east coast yachters should stop at Sibu Island. There’s not much going on on the island, with little in the way of life on land and few decent restaurants outside resorts. The beaches are pristine and idyllic, relatively untouched by Malaysian beach standards. But underwater, these idyllic Malaysian destinations come alive.

ABOVE: Colorful sea life near Tioman Island, one of Malaysia’s premier diving destinations.

Just across the way is Tinggi Island, and the waters here are clear. Snorkelers can dip just off shore, and divers have excellent choice of dive sites.

In the region, too, is Tioman Island – perhaps the best snorkel and dive spot anywhere near Singapore. There’s little to say about Tioman that hasn’t been said. But, as a yachting destination, it’s an excellent long journey. Yachting removes the only bad part about the Tioman experience: the unreliable, crowded ferry to the island from Mersing.

ABOVE: Boatmen throw food to the fish as snorkelers swim through the clear blue waters around Tioman.

Jungle trekking, snorkeling, and diving are all readily available from Tioman, and the avid diver will be able to go off the back of their yacht and not bother with land. When one does go one land, however, there are plenty of local restaurant options from which to choose.

If one were so inclined, one might conceivably stop by Sibu and Tinggi before popping down to Indonesia’s Nikoi Island and back up to ONE°15 Marina Club – hitting all three countries.