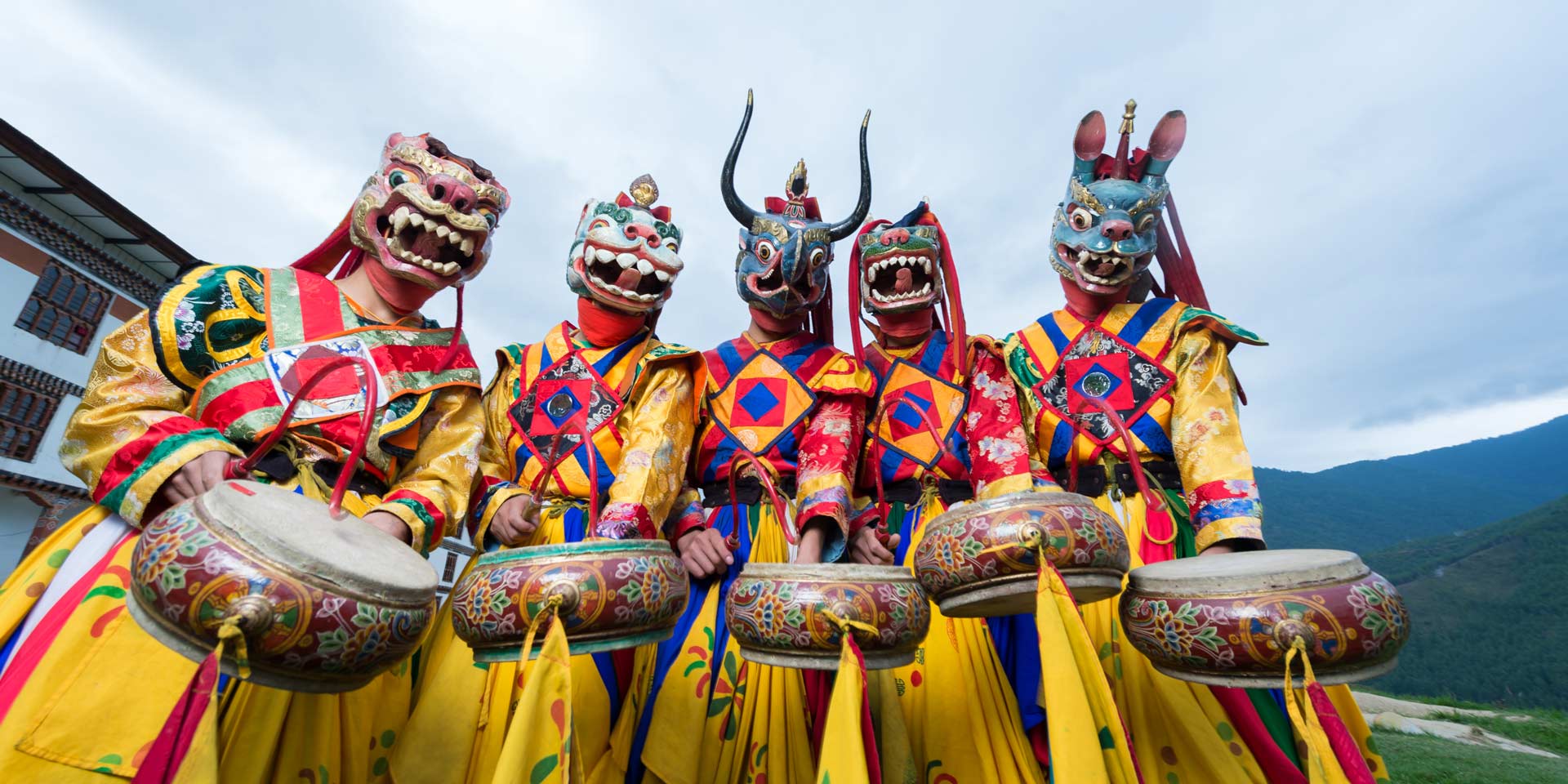 Today we’re whisking you off on a journey into the pretty towns and mountainous meadows of beautiful Bhutan for a glimpse of its fascinating summertime traditions. With a firm emphasis on preserving traditions and religious heritage, this Himalayan kingdom, ensconced in a little enclave between Tibet and India, maintains its authenticity and is a delight for explorers seeking something different.

One of the most potent ways to get a sense of Bhutan’s national character is through its charming local and national festivals. Each community having its own rich and ancient traditions, weaved and embellished over the years, and to experience people coming together to share in their customs is to get an impression of the country’s personality. Through local tsechus (religious festivals), people are reminded of Buddhist teachings and enjoy the chance to pray together and receive blessings. In more rural regions, Bhutan’s nomadic population holds country fairs that mark the passing seasons.

Summertime, when the mountainous kingdom is in bloom, offers countless opportunities to discover Bhutan. To give you a taste, we unravel the stories behind three celebrations:

In a beautiful valley at an altitude of nearly 9000 feet, home to some of the country’s oldest temples and monasteries, Bumthang is known as Bhutan’s cultural heartland. During the fifth month of the Bhutanese calendar is the Nimalung tsechu, which draws crowds from miles around dressed in the colorful costumes of their communities.

This event holds particular significance since the region is home to the first ever tsechu: the great scholar, Padmasambhava, brought his teachings to Bhutan in the ninth century, converting the people with his mantras and recitations and restoring the dying king Sindhu Raja to health. The teacher presented his eight manifestations through masked dances in Bumthang, and the ritual has been kept throughout the centuries ever since.

Nowadays, the Nimalung festival is a chance for the people of Bumthang to reaffirm their faith as they watch the traditional Cham dances, and it is something of a pilgrimage to see the gigantic painting of Guru Rimpoche unfurled at the Nimalung lhakhang (temple): displayed only once a year, the nine-by-12-meter Thongdrol (painted scroll) is said to cleanse the sins of those who lay eyes on it. The sense of excitement and fervor in the crowd as the main event draws near is palpable with people jostling and craning to catch a glimpse of the guru.

A journey through Bhutan’s highest mountain pass takes you to the stunning alpine valley of Haa, nestled among glassy mountain lakes and steep rocky slopes. In the summer, the nomadic herders of the region come together for a joyful celebration of their unique culture, creating a tableau of their lifestyle – a unique experience for visitors, who are warmly welcomed and encouraged to participate.

Sample home-cooked specialty dishes that can only be found in the valley, like Haapi Hoentoe, a kind of buckwheat dumpling stuffed with turnip, onion and mushroom and seasoned with chili and ginger, while sipping on ara, the heady local liquor made from rice. Try your hand at sports and games including archery, yak- and horse-riding, darts and javelin throwing, all of which are accompanied by laughter, singing and a rowdy sense of friendly competition.

Much of the lifestyle in this area revolves around the yaks herded by these nomads and at the Haa Summer Festival, these noble beasts are at the center of the festivities. Watch the shearing and wool making and see dexterous craftsmen weave the hair into the tents and yurts in which they live throughout the year. Much of the food and drink is made with yak’s milk and its products, and even the lively, colorful folk dances are accompanied by Haapi Ausa, songs customarily sung to and about the yaks.

Bhutan’s biggest and most important tsechu takes place in Thimpu, the nation’s capital. Though the main event runs for three days in the eighth lunar month, it’s preceded by continuous prayers and fascinating rituals that go on for days and nights, resulting in an almost weeklong affair that attracts devotees from all over the country.

For such a massive event, its beginnings were humble: initiated in 1867 by Gyalse Tenzin Rabgay, it originally featured just a few Cham dances, performed by monks. The change came in the 1950s when King Jigme Dorji Wangchuck allowed lay people to perform and the dances swelled in number as well as color and spectacle, without compromising the spiritual significance of the tsechu.

Now held in the courtyard of the city’s great temple, the event showcases performances of the Eight Manifestations of the Guru and Dance of the Stags, as well as original vignettes like Dance of the 21 Black Hats and Dance of the Terrifying Deities. In addition, you’ll see Atsaras (Bhutanese clowns) whose comic jesting is believed to protect the festival: their cavorting and capers are supposed to entrance evil spirits, ensuring they do no harm as people enjoy themselves, watching, eating, dancing and praying together.