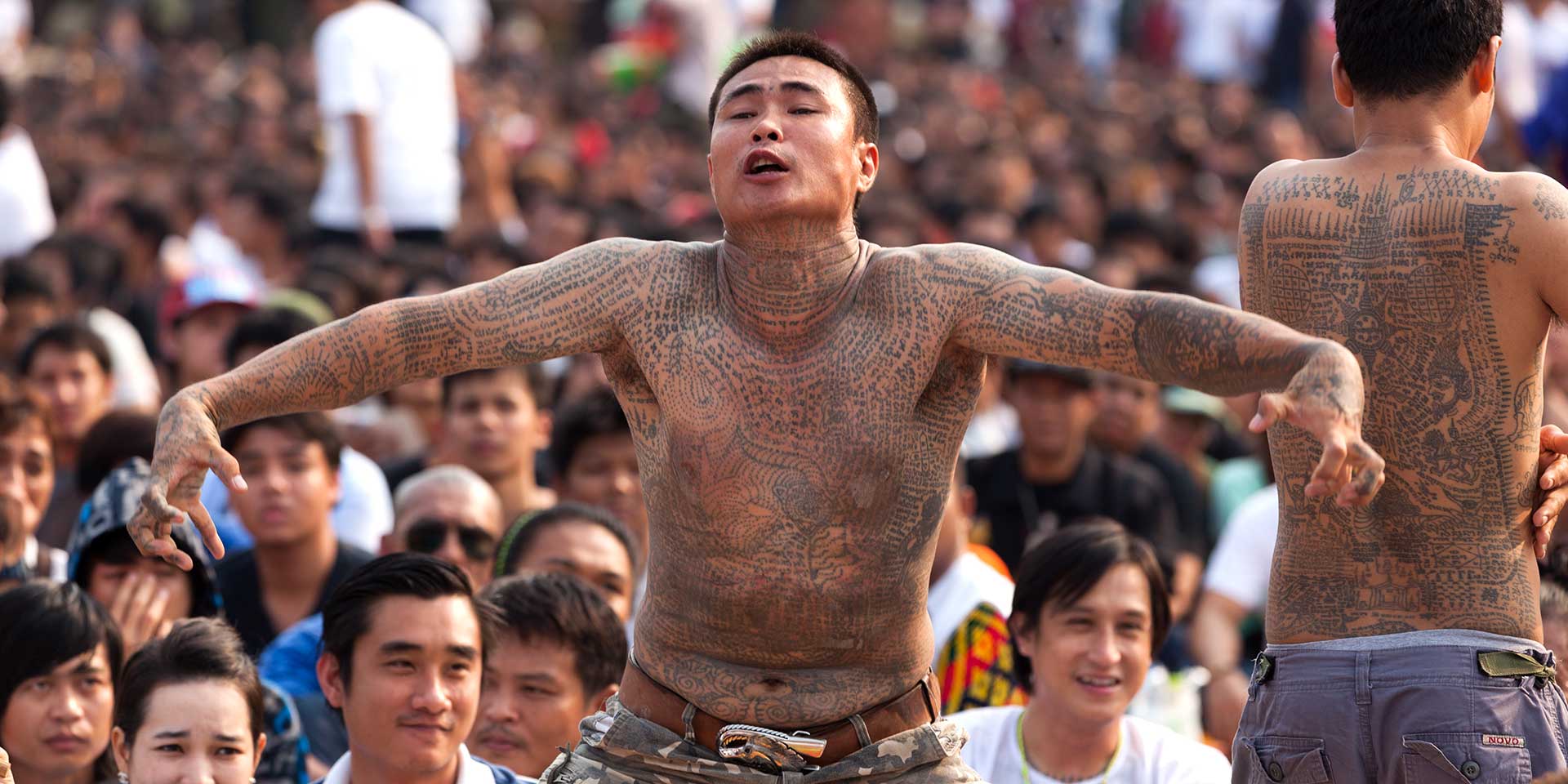 A shirtless man, his torso covered in intricate designs made by the ink-coated tip of a bamboo pole, stood suddenly, crouching slightly, his arms outstretched with his fingers tensed into claw-like formations. His entire body trembling, he looked from side to side, though it was somehow obvious that he wasn’t seeing anything. Not in this world, anyway. He put one leg in front of the other, in a kind of march, which built in speed. Before I knew it, he was in a total frenzy, racing towards the stage, the only man standing amidst a crowd of hundreds of onlookers. Before he reached the stage, he was slowed by the crowd – two men held him in an attempt to calm him. After a moment, something changed. He seemed to ‘wake up,’ and walked casually back to his place on the ground as if nothing had happened. This was the Magical Tattoo Festival I’d been wanting to visit for years. This year, I finally had the chance, and what a festival it was! Held annually on the first Saturday in March at the famous Wat Bang Phra in Nakon Pathom, an hour or so outside of Bangkok, the festival is known as Wai Kru in Thai, which translates as “honor the teacher.”

Wat Bang Phra is the place in Thailand to receive a traditional tattoo, also known as a sak yant. Sak yant tattoos have their roots in centuries of ancient Thai tradition. Believed to lend their wearers special protective powers, this sacred art form is performed using a long, thin bamboo needle dipped in a mixture of snake venom, cigarette ash, and herbs to create ancient geometric designs. The average tattoo entails around 3,000 pricks of the needle, and is finished off with Buddhist prayers; the monk also blows on the bodily artwork to infuse it with special powers. The ancient practice was once used on warriors for courage and strength before they went into battle. This video shows the sak yant process in clear, vivid detail. Thai people wanting such a magical tattoo often make the pilgrimage from all corners of the country to Wat Bang Phra, home to several of the most famous sak yant practicing monks in Thailand. The temple draws over 100 tattoo seekers daily. In Bangkok, Ajarn Noo is a close rival (though he would surely not call himself such) for Thailand’s most famous tattoo artist, having famously inked actress Angelina Jolie, among many other well-known personalities. I mention this because while there is speculation that needles used for tattoos at Wat Bang Phra may not be properly sterilized, Ajarn Noo is known for his clean needles. Long-time Thailand expat and journalist Joe Cummings has published an excellent book on the topic, Sacred Tattoos of Thailand, the first English illustrated book to explore this ancient Thai tradition. The catch with these super-powered tattoos is that the bearers must follow certain rules of conduct in order for their illustrations to maintain their powers. These include abstaining from drinking, stealing and lying, among others. The Magical Tattoo Festival gives those who have fallen off their spiritual path a chance to make their tattoos holy once again – perhaps the reason for its great popularity!

The day of the festival, I thought I’d arrive with plenty of time to spare, having woken at the crack of dawn to get to the festival by 7:30 – more than two hours before the events were scheduled to begin at the auspicious time of 9:39. But I was far from the first to arrive – hundreds had already gathered, many having been there since the night before, getting new sak yants ahead of the festival. Most of the tattooing had been wrapped up by the time of my arrival, and the devotees had now congregated in the temple’s courtyard. I looked around and saw only a handful of foreigners – mostly photographers. I was surprised by how organized the festival appeared – especially given the large numbers of attendees. There were plenty of toilets,  food and drinks for sale, and to my great surprise, no one was trampled, despite the craziness to come. What happened next was truly surprising – random people in the crowd began to act as if they were possessed. They would begin trembling, murmuring, hissing, screaming, or acting in a variety of very bizarre ways. I later learned that they were in a trance state, imitating the creatures depicted in their tattoos. Suddenly, the clawed hands and crouched positions of those with tiger tattoo art made more (though certainly not complete) sense. Some of those with tiger or other types of animal tattoos even crawled along the ground. Their behavior would slowly build and build, until they eventually made a mad dash for the stage at full speed, only to be caught and calmed by members of the crowd. In every single instance – and this really got me – they would stroll back to their spots as if nothing had happened. It was truly bizarre. The entire spectacle went on for a full hour, and there were moments when hundreds of people were skirting about in trance-like states, clawing, crawling and sprinting towards the front from all different directions. Smack dab in the middle of the spectacle, I was taken aback by the unpredictability of things; I never knew when or where the next random person would become possessed and rush past me – I had visions of my camera being clawed from my hands by someone in a deep trance, while I crashed to the ground (thankfully, this didn’t happen).

In my many years of travel, I’d rarely experienced any event with the same intensity (though Thailand’s Nine Emperor Gods Festival may be even crazier ).

When the hour had passed, the monks performed a chant, their deep voices echoing overtop of the now subdued crowds, and holy water was sprayed from hoses upon the crowd. And then, just as suddenly as it began, the event was over. I walked away, camera surprisingly intact, full of photos I knew I would need to show people to convince them this had really taken place, wondering if I should consider getting one of these magical tattoos…