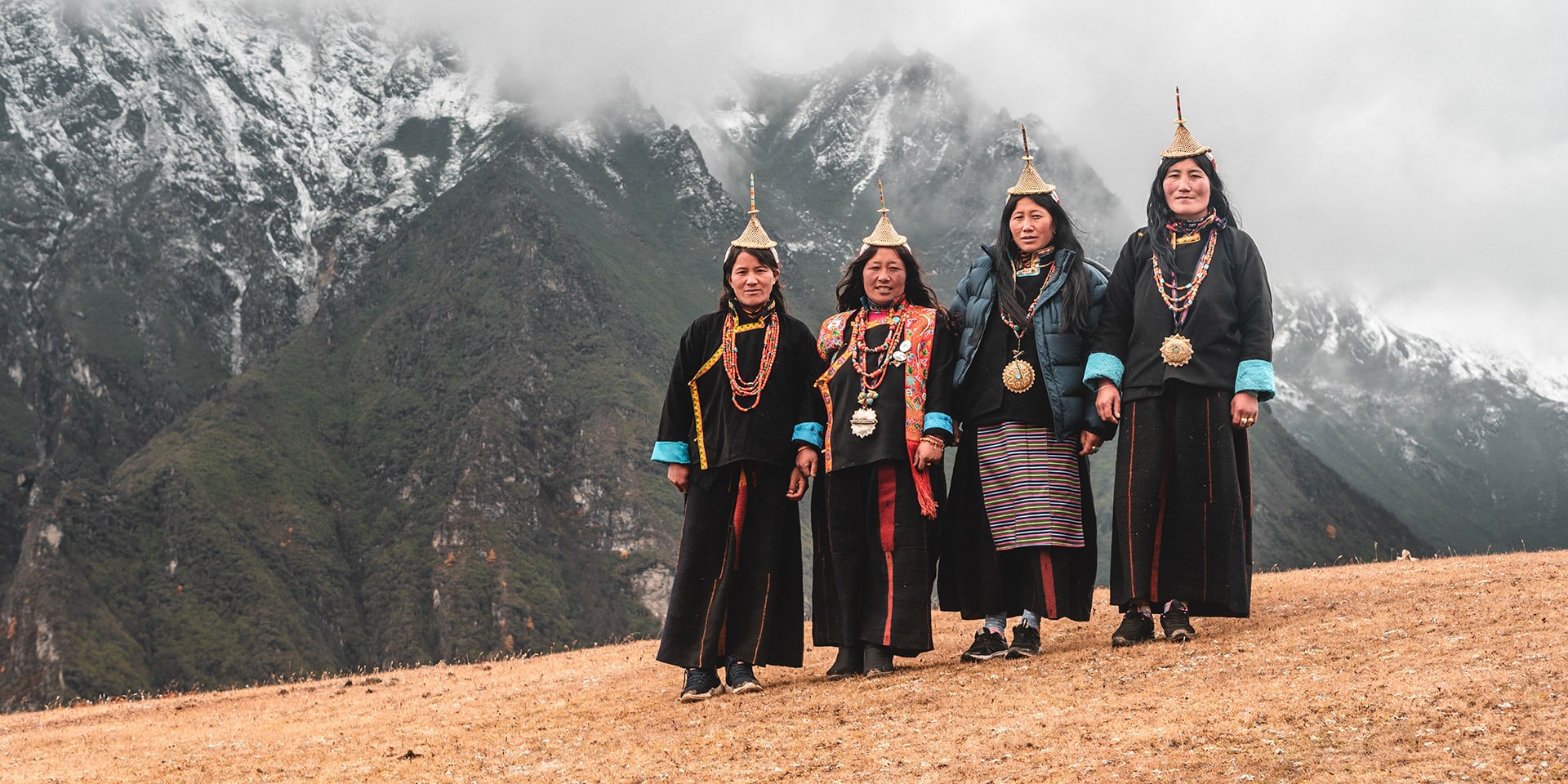 Staying in Punakha the night before, I drove two hours through the Jigme Dorji National Park to Gasa for the trek into Laya.

Few travelers — or indeed locals — travel this way. The winding road is empty, little in the way of humanity but plenty of scenery in these low peaks. Gasa town’s major attraction is its hot springs. Quite crowded, so much so that it puts one in mind of human soup, it might not seem very appealing at first, but in the early winter of the Himalayas, it was a welcome warmth.

But the main purpose of visiting this town was to make camp, for the cold light of morning would see us hiking the long trail to the Royal Highlander Festival at Laya.

Held in Laya, the highest permanent settlement in Bhutan, the festival is a rare opportunity for tribes to meet and for outsiders to photograph the dances and traditions of the highlands people. While the histories of the tribes go back centuries if not millenia, the Highlander Festival itself is a rather new, first introduced in 2016.

It is one of the few festivals to be found in this rugged region of Bhutan, so very sparsely populated and — due to Bhutan’s prohibitive tourism measures — almost entirely without tourists. The end result is the many tribes of the valleys and hills in the borders of Bhutan and the Tibetan hinterland making offerings and singing their songs to honored guests that include Bhutanese royalty.

There is only way to reach this festival sans helicopter: an entire day of intense hiking through mud roads in the freezing cold at altitude.

The accommodations along the journey would be a world away from the Six Senses Punakha. There are no five-star hotels on this trail, but the camping can be made comfortable enough; I had a tent, a warm sleeping bag, even a dining tent and an assistant to cook.

ABOVE: Images from trek to Laya and the Royal Highlander Festival.

Arriving in Laya is obvious because you can see the Layap, the much talked about tribe of these highlands. We arrived exhausted as the sun set and camped overnight behind a farmhouse.

Attempts are being made to build a road from Gasa to Laya. Every year they add a few kilometers. What was once a 25 kilometer trek is now 20. It’s a two-hour 4×4 drive from Gasa to the end of the driveable road, and from here, everyone travels on foot — everyone.

The first major obstacle was a raging river, the only way across hopping from stone to boulder, an interesting introduction to a one-day, 20-kilometer hike. It is a gradual incline, from 2,800 meters to 3,800 meters.

The scenery is perpetually stunning, unerringly majestic throughout: river, mountains, mighty pines. However, it was also very muddy, making the trek quite difficult. Narrow trails with caravans of horses push their way by; falling off the cliff would be disastrous — though the occasion of a horse cart hogging the road at least provided for a restful break in the climb. Every person and horse making their way along the thin trail makes the trail just a little more difficult, so some trekkers may find themselves hopping from rock to rock just as they did crossing the river.

Everyone walks to Laya, and on the way to the festival, I happened across the prime minister, Lotay Tshering, who was also ascending. The king had started the festival only a few years ago and always made it a point of attending, but this year he had been called away to Japan at the last minute, sending the prime minister in his stead.

ABOVE: Celebrations at the Royal Highlander Festival.

I found myself in august company indeed, even my guide was a former MP. He didn’t manage to win his last election, so he became a trekking guide. Looking out over the Himalayan valleys shrouded in mist and bathed in the green nature of the Land of the Thunder Dragon, it does not appear that he missed out.

The climb is gradual until the last hour which comes at a steep angle and can be brutal for people unprepared for the climb. Once travelers reach the old military base, they can expect a tough climb until the end.

The entire endeavor taking around six hours and 20 minutes. We learned along the way that the 20 kilometers would see people racing the next day; they could complete in two hours what took us nearly seven.

Arriving in Laya is obvious because you can see the Layap, the much talked about tribe of these highlands. We arrived exhausted as the sun set and camped overnight behind a farmhouse.

ABOVE: Portraits of the Layap.

Traditionally these Bon and Bhuddhist people are yak herds and farmers, but the boom in the cordycep trade has been a boon to the Layap.

The next morning we woke early to enjoy the festival in earnest. There is the settlement area and the festival takes place on a plateau above the scattered homes and farms, another few hundred meters in the sky.

The views here are incomparable, a fitting place for one of the most obscure festivals in Asia. Every direction one looks there are snow-capped mountains.

If one goes to this festival expecting raucous tribal battles like the Hornbill Festival in India or intense dances like Papua New Guinea, you will leave disappointed. This is a quiet highlander gathering, more like a fête than a festival. Yes, there are traditional dances and horse racing, but also three-legged races and tug-of-war. Dignitaries give speeches, old songs are sung, and lucky lotteries are drawn. The festival continued carefully but unpretentious: decorated yaks, best-dressed mastiff.

The reason for this festival is the people. Of particular interest to most travelers and myself are the Layap. Recognizable from the conical hats, there are less than 2,000 Layap in the world. Originally from Tibet, the Layap women are recognized by their conical hats. It’s said they were wearing the hats when they were banished from Tibet in the 15th century; they believe that they were spared a great curse by wearing the hats and that a great misery will befall them should they ever remove it.

The Layap are also — to a degree — polyamorous. A woman may have more than one husband, sometimes brothers. Apart from the practical aspects of preventing the split up of land, it’s useful, especially for the women, to have a husband that can be away for long periods. This practice, like many others, are becoming less common.

ABOVE: Tribes of the Royal Highlander Festival.

Until the 1980s, very few Layap made contact with the outside world. Traditionally these Bon and Bhuddhist people are yak herds and farmers, but the boom in the cordycep trade has been a boon to the Layap. Cordyceps are a type of fungus that grow from a caterpillar, medically useless but of great import in traditional Chinese medicine. By tribal Bhutan standards, this has made the Layap relatively wealthy. They’re even able to stay out of the village during winter.

The Layap were extremely friendly to photographers; still quite rare for them to meet outsiders, they are happy to sit for portraits and have their photo taken.

Though this is the Layap home turf, there were other tribal groups in attendance, all with their own specific dress. The two other highland tribes were the Sarchop and the Brokpa. For portrait shooting the Brokpa were quite interesting due to their strange twisted tufts of hair.

At nearly 4,000 meters in the early winter of Bhutan, the weather is very changeable. At one moment, mountains can be seen on every side, the next you are lashed by freezing winds and the world is engulfed in haze. It felt like being in a live timelapse.

It was in such a mist that we descended. After two days of the festival, we packed up and walked the long 20 kilometers back to start of the road at Gasa — this time downhill.