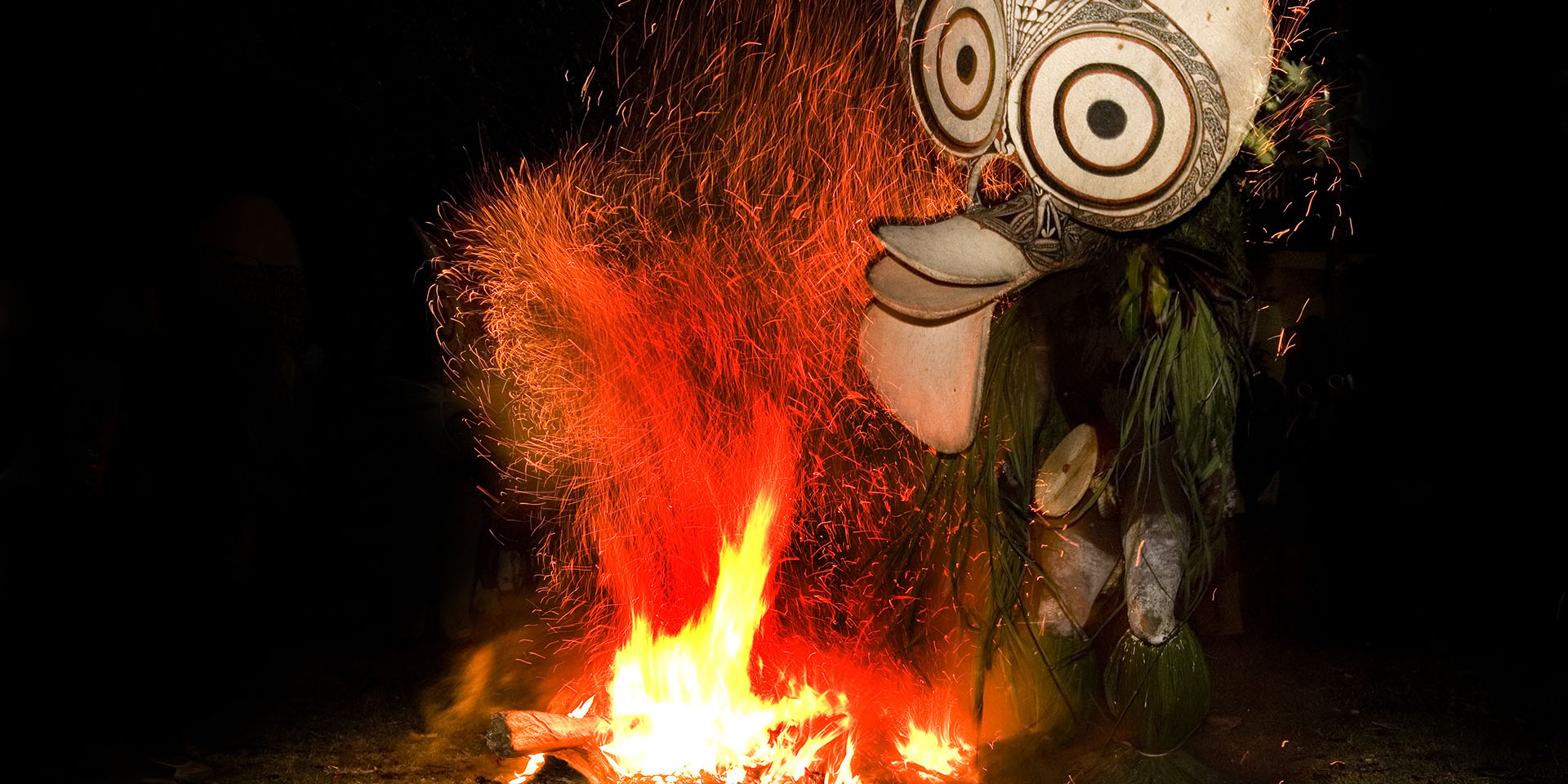 The Baining are famous for their traditional Fire Dance, one of the most iconic performances by any tribe throughout Papua New Guinea, and tonight my group and I were being treated to a private showing.

From our hotel in Kokopo we drove for about one hour into the mountains above the city. The complete darkness outside only added to the mystery of where we were going. Our final destination was to be a village which is home to the Baining people, named after the mountains they inhabit. Some say they were driven into the hills by the active Tavurvur and Vulcan volcanoes, both of which almost completely destroyed the town of Rabaul during the eruption in 1994. I however prefer the more sinister tale of the Baining group being forced into hiding by their rivals the Tolai, represented by the secret society of the Duk-Duk, whose traditional costumes are so alien they are almost cartoon like in appearance. But more on them later.

Upon arrival in the village it was hard to see what was happening, with the only illumination being provided by the glowing wood of a freshly lit bonfire. Soon however the fire was stoked by the master of ceremonies, and after copious amounts of wood and straw were added, the flames licked up into the night sky, allowing me to survey the surroundings. To my right sat the percussion for the evening, which consisted of about fifteen adolescent males thudding large bamboo sticks into the ground whilst chanting in unison.

Once the watching villagers were whipped up into a suitable enough frenzy, the dancers started to appear, one by one emerging from the shadows. The face of each participant was obscured by huge elaborate masks made of cloth, bamboo and leaves, with the enormous painted eyes giving almost giving them the appearance of a giant inquisitive owl.

For the next ninety minutes or so the dancers fed off the music, appearing in an almost trance like state as they summoned the courage to take turns running through the roaring fire. In total there appeared to be about a dozen dancers, all young males with their bodies covered in leaves and black paint. Strategically placed pieces of cloth protected their modesty. It’s clear that the participants were incredibly fit, demonstrated by their ability to dance constantly next to the soaring temperatures of the raging bonfire. The tradition says that the dancing must continue whilst there is still wood to burn, and the mountainous stack of tinder in reserves ensured that this was a party that wouldn’t be ending prematurely.

In Baining culture the Fire Dance is performed on various special occasions, including the birth of new children in the village, remembering the dead, as well as being a coming of age ceremony for young men entering adulthood. Traditionally it has been an event for males only, with women not even permitted to watch. However on this occasion every man, woman and child not participating in the ceremony were glued to proceedings, and as the stack of wood dwindled and the fire died down, they all rose to their feet and joined in with the dancing, keeping impeccable timing with the constant hypnotic banging of the bamboo sticks. Once we had run out of things to burn, the show concluded with all of our masked entertainers running through the fire with extra gusto, stamping on the dying embers with their bare feet until all went black. In years past the performers would prolong the ceremony by burning their oversized headwear, but I was glad that the masks were spared, as it would have been a shame to see something so beautiful burned in the honor of me and my traveling companions. It was a fascinating end to an absorbing performance, and on the drive back to the hotel I was able to reflect on what a privilege it had been to witness something which until fairly recently was relatively unknown to the wider world.

Kokopo and Rabaul are located on the island of East New Britain, which is about a two hour flight east of Port Moresby, in the direction of the Solomon Islands. The island has a much more tropical feel when compared to the highlands of Tari and Mount Hagen, and only serves to illustrate the diversity of culture and terrain in Papua New Guinea.

The morning after the fire show I decided to find out what the island has to offer in the daylight. During the Second World War East New Britain was an area of strategic importance for Japan, and in 1943 there were over 100,000 Japanese troops based there. One of those stationed in Rabaul was Admiral Isoroku Yamamato, the man responsible for the attack on Pearl Harbor. Although the Japanese left the island after their surrender in 1945, evidence of their occupation can be found all over, including Admiral Yamamato’s preserved bunker, almost 500 miles of tunnels dug in the hills surrounding the town, and abandoned barges which have remained in the tunnels since the end of the war, left to slowly rust over the subsequent decades. In many ways the whole area feels like an open air museum to past atrocities, and it is fascinating to explore with an expert guide who can make the history come alive.

Whilst there is plenty to keep a visitor occupied and enthralled on land, the area of East New Britain also allows for some wonderful sea excursions, as well as world class diving opportunities. Indeed, there are thought to be wrecks which still lie uncovered at the bottom of the sea, which makes the destination all the more attractive for intrepid divers. On my final day I took a boat ride to the Duke of York Island, which took about an hour to reach in our small motorboat. This idyllic island is rarely visited by tourists, and the local children were delighted by our arrival, running out to our approaching boat to give us a warm welcome. Although I am not a diver, I was able to make acquaintances with an abundance of sea life whilst snorkeling near the shoreline. There is a great feeling of serenity on this island, and the locals certainly practice a very simple and peaceful lifestyle. It served to act as yet another reminder just how untouched by the modern world Papua New Guinea is.

On our return journey back to Rabaul we were joined by a pod of spinner dolphins who were fascinated by our vessel, swimming right next to the boat for a closer look. They were only to happy to perform for us their signature move of leaping out of the sea acrobatically whilst spinning in a corkscrew motion. It was the perfect end to a wonderful stay in East New Britain.

So what of the mysterious Duk-Duk I mentioned earlier? I’d heard whisperings of this ethnic group ever since I arrived on the island, including tales of black magic, secret ceremonies and rituals conducted deep in the jungle, only appearing in public during a full moon, naturally. Their sexual magnetism is said to be so great, that married females were forbidden from even seeing them, as they would inevitably fall in love at first sight, or even get pregnant just by looking at them!

On my first morning at Kokopo Beach Bungalows I was awoken at 05:30am by chanting and music traveling across the bay. Sleepy and probably still jetlagged I assumed it was a daily occurrence, perhaps orchestrated by the hotel. Enquiring to the waitress over breakfast I was astonished to hear that it was in fact a canoe full of Duk-Duk, traveling along the coast and indulging in one of their unique rituals. I rued that fact that I chose not to haul myself out of bed and investigate the singing, as this was absolutely not something that happened every day. Indeed the waitress informed me that she had been working at the hotel for quite some time,and had never had the opportunity to witness such a spectacle.

This just serves to illustrate how much depth there is to Papua New Guinea, and how even in a two week stay you barely scratch the surface. Yes, wherever you travel you will see performances that are laid on for tourists, be it the Baining Fire Dance, Asaro Mudmen, or the Wigmen of Tari. But these ceremonies are still so ingrained in their culture, and not once did it feel like tribes were going through the motions, dressing up in traditional garb for our benefit only. I never did get to see the Duk-Duk, but a part of me is happy that they will remain shrouded in mystery for the time being. I will however endeavour find them when I make my inevitable return to this fascinating country in the future.