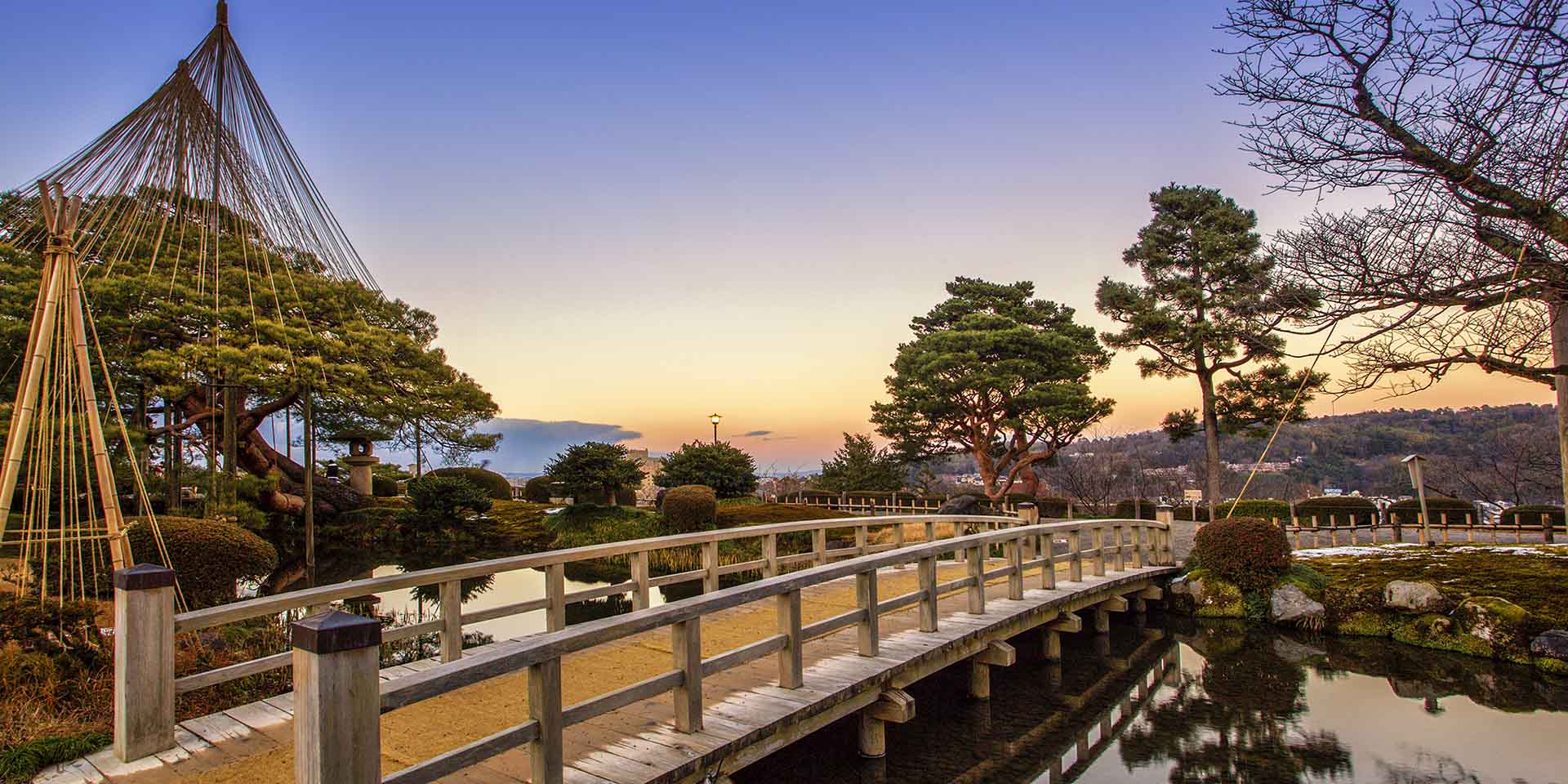 The recently renovated Kanazawa Train Station is the terminal for the Hokoriku Shinkansen, and at least twelve trains a day will make the fast journey from Tokyo. With access to the city now so much easier, Kanazawa will start receiving the attention it so greatly deserves, as this is a city chock full of sights, history and culture, without being overcrowded with tourists.

In Kanazawa it’s possible to find anything you can possibly think of when looking for the quintessential Japanese experience. Looking to visit a perfectly manicured Japanese garden? Well Kenrokuen is considered one of the top three gardens in the whole of the country. Taking a walk through the grounds one can’t help but be overawed by the beauty and attention to detail that went into its creation in the 18th & 19th centuries. The Japanese maintain that an excellent landscaped garden must possess six different sublime qualities: spaciousness, seclusion, artifice, antiquity, watercourses and panoramas. It comes as no surprise that Kenrokuen can boast all six. During wintertime one will notice another unique characteristic of the garden, that being the use of a series of ropes to protect and support the age-old trees from heavy snow during the cold months.

From gardens to Geisha, another element of Japanese culture so well known to the western world, and yet still so inaccessible. Many will often associate the Geisha with Kyoto, largely in part due to the international popularity of the novel Memoirs Of A Geisha. Yet in Kanazawa there are numerous Geisha districts every bit as fascinating and mystifying as those that can be found in Kyoto. Currently there are 48 active Geisha in Kanazawa who make a living entertaining Japanese businessmen, and the opportunity for tourists to share a couple of hours in their company is incredibly rare. With the right contacts however it is possible to spend an evening being entertained and serenaded by one or two of these fascinating women. In the interests of research I bravely volunteered to take part in this experience, and headed to the Higashi Chaya-gai Geisha district under the cover of darkness. Only a few hours earlier this area had been a hive of activity as tourists visited a few of the teahouses that choose to open their doors to general public. In the evening however the area is completely deserted, and walking down the historic streets it isn’t hard to imagine what life was like in this city centuries ago. The evening’s entertainment was both surreal and fascinating as my Geisha served me food, poured me drinks, danced, sang and played the shamisen, as well as giving me an impromptu drumming lesson. As a sign of appreciation guests can pour the Geisha glasses of sake to show that they approve of the entertainment – I believe I ended up portioning out a whole bottle, just to make sure they realized how much fun I was having!

One famous son of Kanazawa is the essayist D.T. Suzuki, a man who was influential in bringing Zen Buddhism to the attention of the western world. A museum has recently opened in the city which acts not only acts as a legacy for his works and writings, but also as a venue for self-reflection, a key characteristic of Zen Buddhism. The museum was designed by Yoshio Taniguchi, who is perhaps best known for designing the MoMa in New York. Taniguchi has kept the concept of Zen Buddhism at the heart of his design, and the complex attracts many visitors every day, who go not just to look at the installations, but to spend time wandering the grounds, or in many cases looking out onto the Water Mirror Garden from the Contemplative Space. It’s hard to envisage a more tranquil spot in any city in the world, and people will spend hours just sitting in solitude, contemplating everything they have done, are doing, and will do in the future.  The museum is located just a few steps away from the more well known 21st Century Museum of Contemporary Art, which is another example of how Kanazawa is proving itself to be a forward thinking and cutting edge city, whilst still being true to the culture and traditions of its past.

Kanazawa is full of authentic and traditional Japanese experiences, from visiting a Kaga Yuzen studio, where elaborate kimonos are painstakingly hand painted with the most intricate and beautiful designs, to taking part in the famed Japanese Tea Ceremony, a ritual in Japan that only certified Tea Masters may conduct. A must for any visitor to the city however, has to be indulging in a traditional kaiseki multi-course meal. A common trend throughout Ishikawa Prefecture is how proud the people are of their self-sufficiency, and their ability to live off the local land and sea. This is most expertly illustrated with a visit to Zeniya, the restaurant of Chef Shinichiro Takagi, whose talents in creating food that really does taste as good as it looks have earned him plaudits from respected peers worldwide, including Michael Romano and Anthony Bourdain, both of whom have travelled to Kanazawa to sample his creations. Chef Takagi sources only the freshest local ingredients daily, and curates a unique menu best utilizing what is available, with the fruits of the sea invariably being the main attraction. Eating here isn’t a somber affair where one must eat in silence, like at the infamous Sukiyabashi Jiro in Tokyo. Chef Takagi takes great pleasure in conversing with his guests in both English and Japanese, so visitors have the double pleasure of seeing a true artist at work, and also learning about his inspirations and food philosophies.  Each dish is served only after its presentation has come under the strict scrutiny of Chef Takagi, and watching him and his team assemble each plate in front of your eyes is a crucial part of the whole dining experience. I asked my guide why there are no Michelin starred restaurants in Kanazawa, and he told me it is simply because the Michelin people have yet to visit. I sincerely hope they are on the very first Shinkansen on March 14th, as there are countless restaurants in the city that are more than deserving of this accolade.

Kanazawa has been a Remote Lands favourite for many years, and that is because the number of sights and activities for a city of this size make it one of the jewels of Japan. The city is ready to welcome the many more tourists that will inevitably visit thanks to the shinkansen, but Kanazawa will always be true to its roots. Throughout my time in Ishikawa I have constantly heard people mention the phrase ‘Real Japan’, and they say this because everything throughout the region is authentic. The experiences are accessible to tourists, but they are not made for tourists; they are still a way of life in Ishikawa. In a country as modern as Japan, Ishikawa is very skilled at being able to embrace the new, whilst at the same time very proudly holding onto and promoting the traditional way of life, whether it’s salt making straight from the Sea of Japan in the north, soy sauce factories in the south using methods that are centuries old, or indeed an evening of traditional Geisha entertainment in Kanazawa. Everyone who chooses to visit Japan should set aside at least a few days to explore this magnificent region, which typifies all one imagines when they think of the ‘Real Japan’.