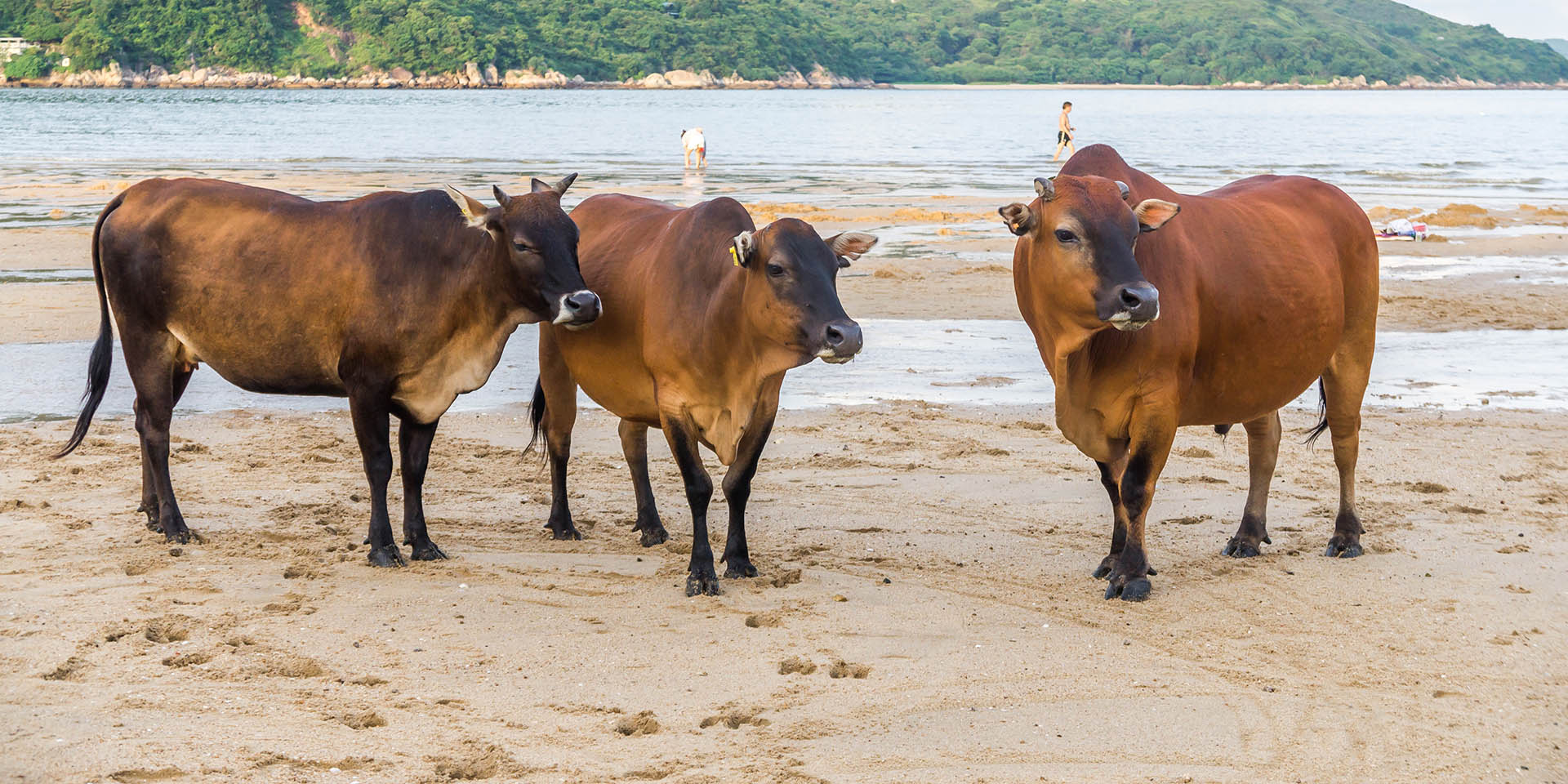 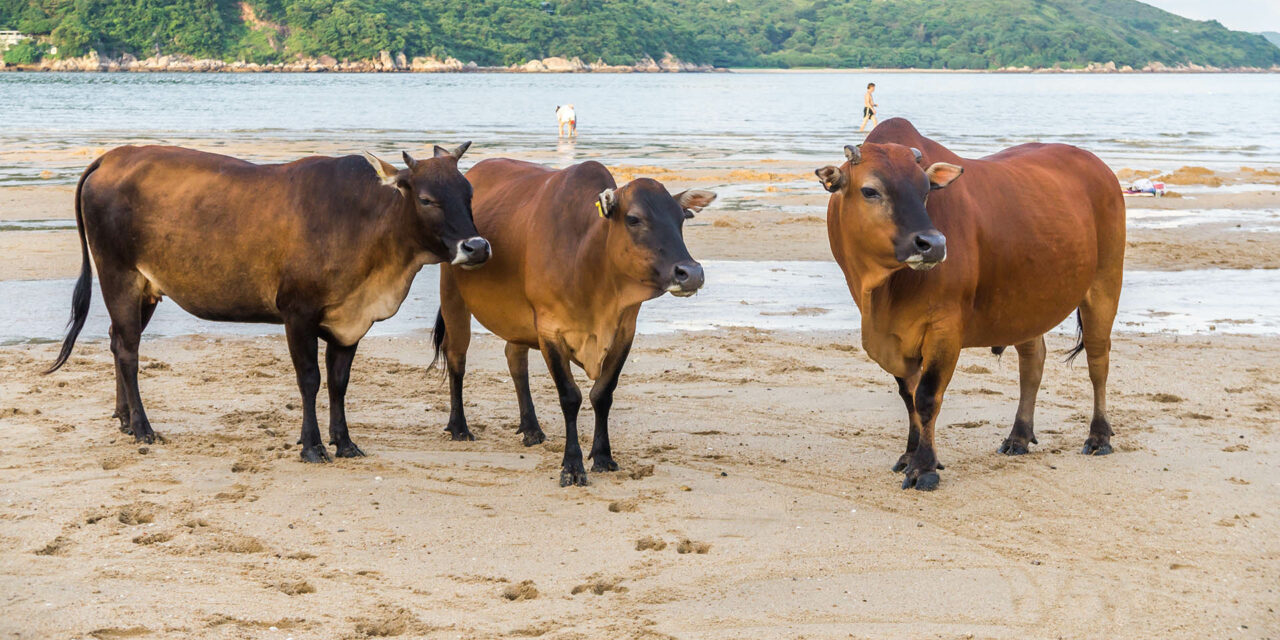 For most travelers, Hong Kong is a financial hub, steely spires and ruthless capitalism. Tourists travel there – from the West and from the mainland – for the bustle of this exotic metropolis. But, those who call Hong Kong home will tell you that there is still some natural magic found on the well-preserved islands, places where cows and wild buffalo roam free near one of the most densely populated places on Earth.

Known for high rises and housing prices – where construction never ends and new train lines get built in the blink of an eye – Hong Kong’s landscape does not naturally lend itself to the ideal of a herd of 400-kilogram buffaloes rolling in the mud. But, buffaloes there are, and in Hong Kong, they be.

Buffaloes at the Beach

ABOVE: Hong Kong’s islands play host to both cows and water buffalo. On Lantau, they mix with the beach goers and sometimes wander and sleep on the streets and pavements.

For visitors to Hong Kong, a day trip to Lantau Island typically means taking the cable car to the Big Buddha and then the old fishing town of Tai O. Mui Wo remains one of the lesser traveled tourist pulls on the lush, green island. This is because there are no roads going up into the mountains, and that’s why there are hundreds of bicycles parked next to the pier. It’s the only way to get around.

You can rent a bike and go out exploring, and within a few minutes you’ll find yourself on a narrow paved path heading into the hills. The towering Lin Fa mountain provides a stunning backdrop for tiny red temples and farms. Once a pirate hideout and a smuggler’s den, stone watchtowers used to repel invaders dot the town.

ABOVE: A cow pokes its head through the greenery on Lantau Island. For the most part, these creatures roam where they please with little interference.

The village of Luk Tei Tong is adjacent a lush wetland, a favorite watering hole and cooling off spot for the buffaloes. Next door neighbor Tai Tei Tong is a popular path for the cows.

When the herd splits, you can hear them mooing in the distance. The cows and buffalo coexist happily, though separately. In the evenings, both herds congregate on Silvermine Beach, and are so curious that the iconic Silvermine Hotel has to close its gates to keep curious cattle out of the manicured gardens.

Genesis of the Hong Kong Herds

ABOVE: A herd of water buffalo mill about near Pui O Beach on Lantau Island. The herds here wander around the nearby campsite.

According to data from the Agriculture, Fisheries, and Conservation Department, there are approximately 1,100 head of brown cattle and 120 water buffaloes in Hong Kong. At Pui O Beach, the wild buffalo congregate and can be easily seen from the beaches. They are, in fact, all over Lantau. So, where did these wild beasts come from?

Both the buffalo and cows were brought to Lantau for agricultural reasons: the cows from their milk, the buffalo as beasts of burden. It’s said the cows are at least in part due to the now defunct Trappist Dairy, which is said to have set them free when the dairy went out of business in the early 1980s. In the 1970s, however, agriculture on the cramped island colony had already begun to decline.

ABOVE: A water buffalo on Lantau up close and personal. These creatures are very placid, but extremely powerful.

Today, almost all of the farms are gone, and the rural buildings have turned into village houses. Long before the handover cattle roamed the shores of Lantau and other islands, free from their yokes. As to how they’ve been able to survive in the urban wilderness, that’s down to Hong Kong’s natural beauty. Despite having areas like Kowloon – literally the most densely populated place on earth – more than three quarters of Hong Kong is covered in parks and nature reserves.

The animals’ continued presence is also down to the residents’ ability coexist. The people of Mui Wo, for example, are quite fond of the cows and buffalo. There are signs in the shops warning newcomers to be kind to the friendly cows and give them a wide berth. That said, it’s not uncommon to see an angry granny angrily swatting them with a broom to chase them away from her vegetable patch or flower garden.

These beasts wander into busy streets and sometimes even into the local shops. As ever, humanity is encroaching. Hong Kong is a place short on space, and there are, not surprisingly, big plans to turn Lantau into yet another sprawling metropolis. For now, the law protects against excessive building on Lantau and other islands, and attempts are being made at moving the cattle and buffalo to safer pastures.