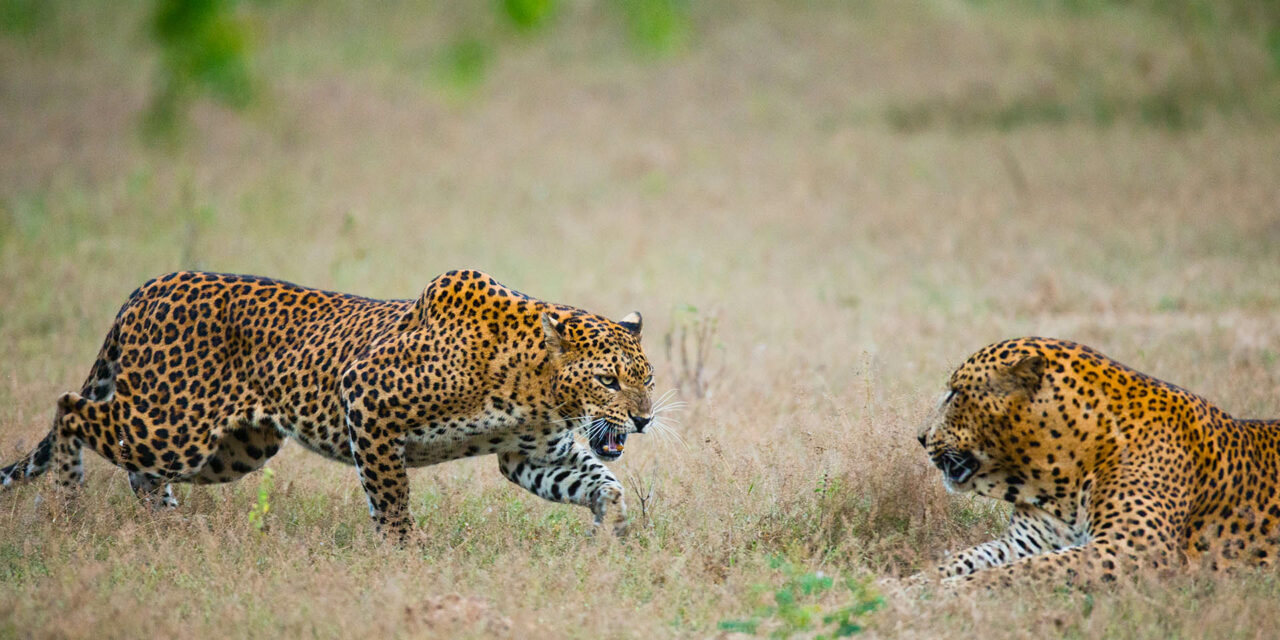 “As an apex predator, the leopards are seen all day, often just crossing a road or hanging in a tree,” says Arshad Nihaz of Leopard Trails, explaining how this beast of tooth and claw is not that different from a big kitty cat. “When it gets cold, they find a spot with direct sunlight to heat themselves, lazing around to regulate their body temperature.”

Arshad speaks of Yala National Park in Sri Lanka’s south. The area is vital to the conservation of Sri Lankan elephants and aquatic birds – as well as one of the highest densities of leopards in the world. On safari in Yala, these cats can be seen in their natural habitat, lazing in the sun or stalking at night.

The Biggest Cat on the Island

The Sri Lankan leopard subspecies is native to the island and is the largest type of leopard. This powerful hunter is a wiry mass of lean muscle and sinew, covered in a tawny-colored fur, patterned with dark brown spots and two-toned markings known as rosettes.

Those who want to see the leopards in all their ferocious glory travel by in the evenings, when the leopards use their keen eyesight to hunt the Sri Lankan axis deer. For nature lovers, watching a one of the planet’s ultimate killing machines stalks and catch a meal is truly inspiring.

It’s a good destination 12 months of the year. Every month there are good sightings. It’s famous for elephants, bears, and birds, and it has the highest density of freshwater crocodiles.

“There are no hotels allowed inside the national park,” says Arshad. “Leopard Trails is a tented luxury camping operation located in the buffer zones of Yala and Wilpattu. Wilpattu has three rooms of classic tented accommodation and Yala has eight.” Wilpattu is similarly luxurious as it pertains to camping, and there’s a greater chance of seeing the adorable sloth bear.

For those worried their safari would be a little on the rough side, these accommodations are rustic but luxurious, basically a hotel, but in a tent.

It may be a safari and there’s obviously no need to go all Bear Grylls. Still, there are rules. “There’s no strict attire required on safari – flip-flops, open-toe shoes, and shorts and t-shirts are fine, but avoid bright colors. The sun reflects bright colors into the eyes of the wildlife,” says Arshad.

“Yala National Park is the best place in the world, a real haven for leopards. It has the one of the highest density of leopards,” says Arshad. “We sometimes see one to ten leopards per day. The maximum recently was 16 leopards in one day.”

Camping with the Cats

ABOVE: A female walks with her two kittens after sunset in Yala. With their keen vision, the leopards of Sri Lanka hunt the axis deer by night.

Covering 378 square miles and found just 190 miles southeast of Colombo, Yala National Park is the second biggest and most visited national park in Sri Lanka. It is divided into five blocks, two of which – Ruhuna National Park and Kumana National Park – are open to the public.

“It’s a good destination 12 months of the year. Every month there are good sightings. It’s famous for elephants, bears, and birds, and it has the highest density of freshwater crocodiles.” Unlike its wetter northern neighbor Wilpattu, Yala is mainly dry, so it’s a safe bet that your trip will be met with fair weather.

ABOVE: Elephants wander onto the safari path in Yala National Park. The area is also home to notable species of birds, deer, and mugger crocodiles.

Guests aren’t permitted to wander about unsupervised, but guides are on hand. “Our guides are extremely knowledgeable and passionate, and know the leopards very well. They know the leopard, its mentality, habits, and patterns of behavior. Most importantly, they know how to interact.”

“We do not talk when there is a sighting, staying as quiet as possible,” says Arshad. “It’s hard [to remain hushed]. Every time I see a leopard it’s natural to get excited. I still do after seeing hundreds.”