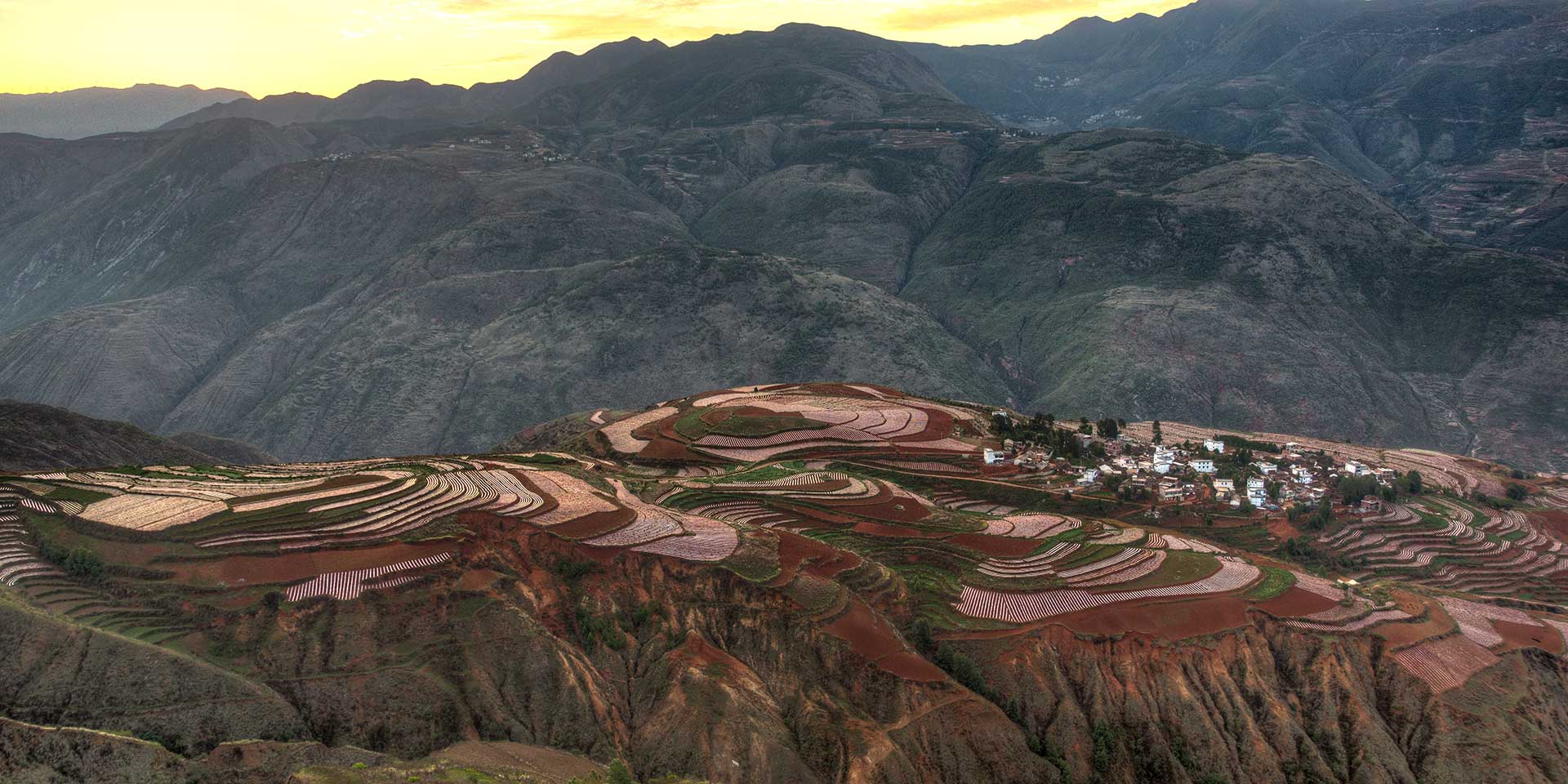 The old man had wrinkled skin that was weather-beaten from years spent working in the fields and seemingly possessed no teeth.  “I’ve been sitting in the same spot, every day, for the last 10 years,” he said, through my translator.  He told us about his 10 children.  They had all moved to the city, lured by the promises of modern life.  Too old now to work the land and with no children to take up his tools, he simply sits.  “It is a good place to meet tourists and pose for photographs—to make money.”

The man lives in Dongchuan, part of what is known as the “Red Lands” – home to some of the most spectacular scenery I’ve ever seen. It’s perhaps no surprise that he can make money posing for photos in front of it, but still, I couldn’t help but admire his adaptability in the face of such change and upheaval. 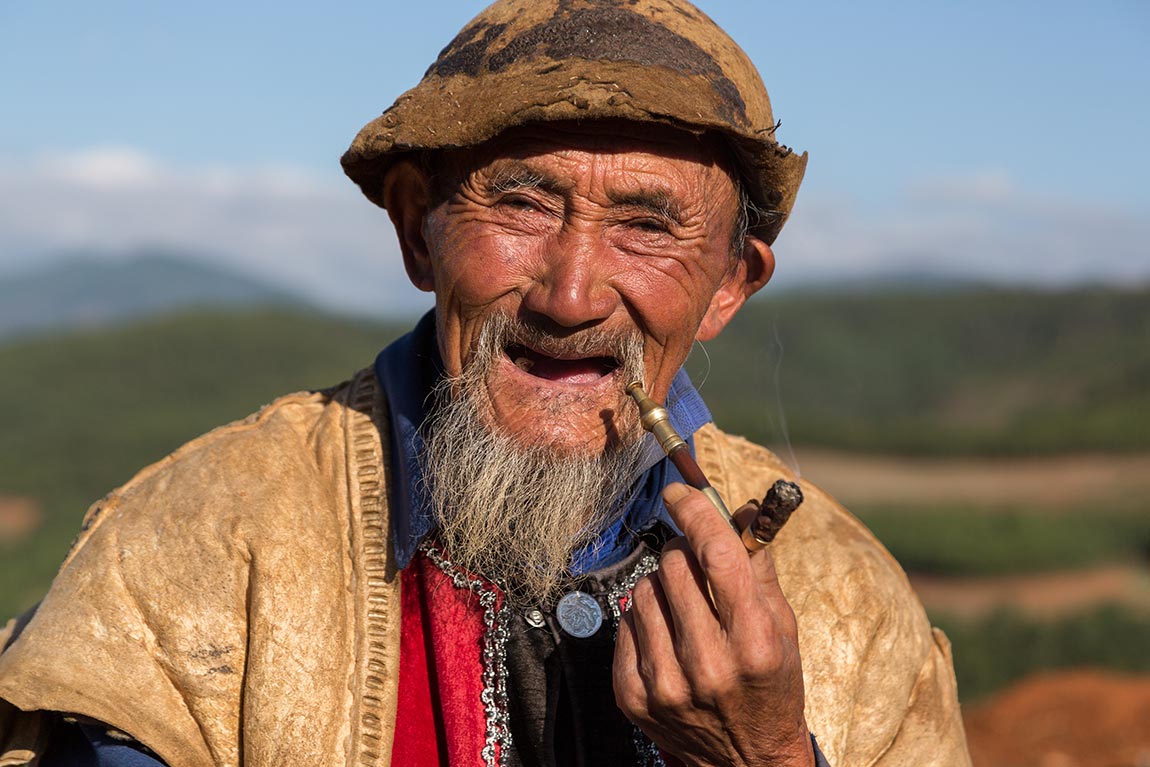 Dongchuan is located about 100 miles southwest of Kunming, in China’s Yunnan province. It is known for it’s beautiful soil, which is a vivid red thanks to its unusually high copper content, swirled with the multi-colored crops of yams, barley, potatoes, buckwheat and the white oil flowers growing in it.

I made the three-hour journey along the curvy mountain roads from Kunming in early June, which is one of the best times to visit the Red Lands. I knew from my research that the scenery would be stunning, and from the outset I wasn’t disappointed, but I was also interested to meet the people and get a sense of the individual ethnic groups in this remote and beautiful area.

My first stop was in Luosiwan, with fields stretching out in all directions. As I stopped to take my first photos, I quickly noticed how quiet it was. Having traveled to China for decades, this was a welcome relief from the hordes of visitors in places like Zhangjiajie (aka Avatar Mountain) and The Great Wall. That being said, the moment I began my research into the locals – chatting with a Han lady through my guide – I felt the evidence of encroaching tourism. The lady was certainly friendly and very happy to pose for photos – for a fee of 10 yuan.

We headed over to another scenic spot called Jinxinyuan, which we shared with a handful of Chinese tourists – although it was quite bearable. I spent an hour or so photographing the panorama in front of me and then we hopped in the car, bound for the most famous destination in the area. As we pulled into Luoxiagou, we could see a ticket gate and parking lot under construction. Once out of the car, we found our way to a large boardwalk where a watchtower affords a spectacular view of the village below – surrounded by multicolored fields, with mountains beyond. It was clear that the Chinese government is preparing for mass tourism in Luosiwan, as it is doing in other idyllic rural areas across China. As China’s urban centers expand and more and more people move to the cities in search of opportunity, the countryside becomes a popular stop for Chinese tourists, wistful for the simple beauties they left behind not so long ago. I enjoyed the quiet before the storm,  knowing it was only a matter of time.

As the youngsters continue to move to the cities and the city-dwellers in turn become more travel-savvy, the balance will continue to tip – stories like that of my toothless friend in Dongchuan will become increasingly common. But at what cost? As traditions are traded for tourists, the peaceful tranquility and authenticity of this inarguably scenic destination may be lost. I became determined to make the most of it while I could.

Down the boardwalk, I took up a prime position for the imminent sunset, along with about 30 others – including a pretty-solid contingent of photographers with top-of-the-line equipment. While the average person may get their fill of a scenic view in 15 minutes, photographers will stick around for a couple of hours waiting for the best light – and I am no exception. As darkness fell, we drove back to Luosiwan and checked in at a small guest house. To be honest, our hotel was a lot nicer than I expected, with hot water and clean, new rooms. It didn’t matter much though, as I planned to leave at 4:30am to catch the sunrise back at Luoxiagou. It was freezing cold in the dark as I joined a few other photographers, waiting for the first shimmer of light on the fields below. I wasn’t disappointed – the morning light revealed a spectacular view with a color palette totally different from the afternoon before.

Having checked the scenery off my list, I set out to meet more of the people living in the area. During a leisurely breakfast in town, we had a chat with an old Han man. Casually smoking a pipe, he was dressed in a style of clothing I saw many of the old people in the area wearing – though none of the youngsters – and my guide told me they’ve been doing so since the Mao period. Later, we joined several locals at a beautiful viewpoint at Le Pu Ao. We got talking to three elders who had been sitting at this spot for years, meeting tourists and posing for pictures. Theirs was, by now, a familiar story. They talked about how difficult farming has become now that the younger generation has moved to where they are able to earn more money. They see the influx of tourism as a good thing, bringing with it new income and opportunity. But, again, I wondered. 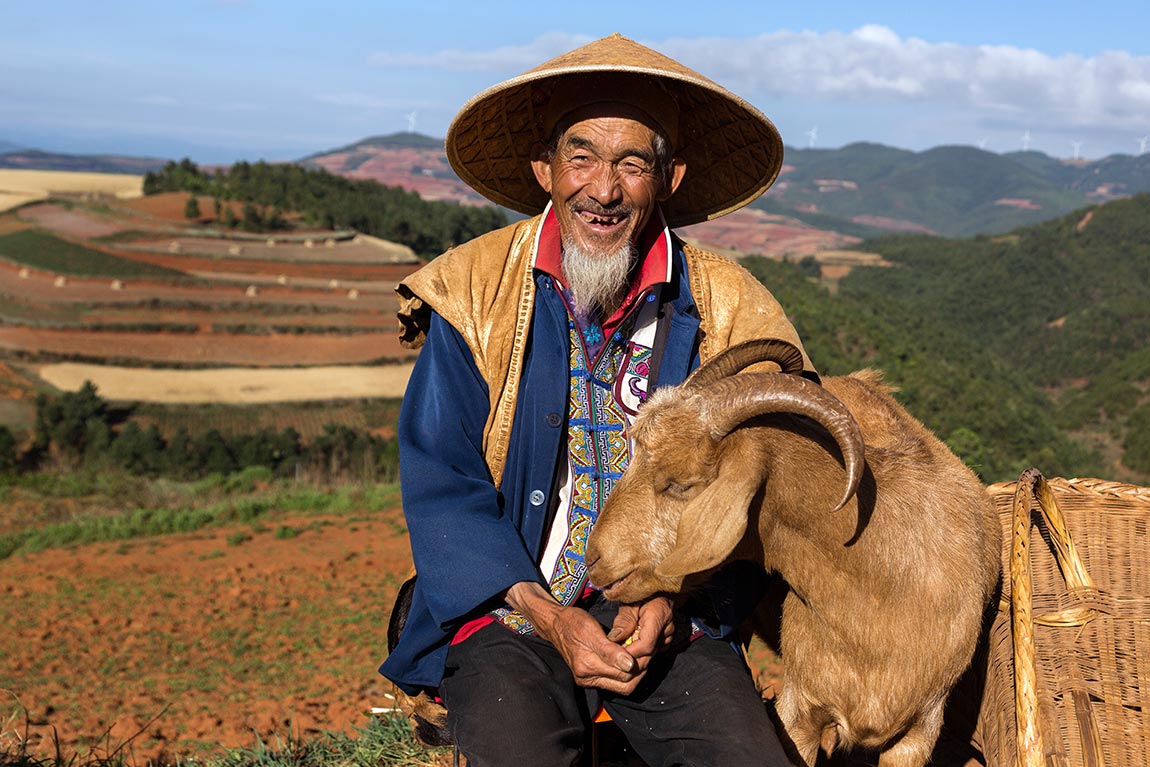 We set off from the Red Lands for Jiaozi Snow Mountain, three hours’ drive away. Jiaozi is located in Luquan, approximately 93 miles from Kunming. During the winter and spring the mountain is snow-capped, and got its name because it resembles a sedan chair.

On the way to Jiaozi, we took a detour to a Yi minority village. Here, at last I thought I would see traditional tribal life preserved and maintained. But I was disheartened to learn that the residents here have gradually eschewed even their traditional costume in favor of modern garments – except on special occasions or during festivals. Luckily, an old woman we met was very friendly and eager to show us her unique Yi garments, embroidered with colorful patterns.

We drove onwards, along the winding mountain roads, slowly zig-zagging higher and higher. Finally stopping at our hotel, we were standing at 11,484ft – nearly the same elevation as Lhasa in Tibet. The difference in altitude was quite noticeable, and I was thankful to have a night to acclimatize before hiking up the mountain the next day.

While the tourism infrastructure at Jiaozi is already very developed – with scheduled shuttle buses to ferry visitors up the first stage of the mountain – there still weren’t huge crowds (though certainly more than Red Lands), and not once did I see another non-Chinese person. Once again, as the bus wound up the switchback mountain roads, I felt grateful that international and mass tourism hadn’t yet taken over and what a shame it will be when it inevitably does.

From the bus, we took a cable car to over 12,000ft and then walked up a series of boardwalk stairs to the “Genius Pond” – finally stopping at an altitude just short of 13,000ft. There was natural beauty every step of the way: large cascading waterfalls and smaller trickling ones, alpine forests, flowering rhododendron fields, and stunning mountain vistas. In the winter, the waterfalls are frozen solid, and the mountain is covered in snow, making it perhaps even more scenic. Finally at the top, we spent about an hour or so taking pictures before retracing our steps back down.

It was time to head back to Kunming, but first we took a detour of about two hours to Zhuan Long as it was market day. I was hoping for a traditional market where tribes from local villages would gather to trade their wares. However, what I got was a vast, sprawling and bustling market of village vendors, selling everything from food, clothes and medicine to hawks and huge python skins. While it wasn’t what I expected, it was certainly authentic in its own way, and from a distance I spotted one Yi woman with her baby, dressed in brightly-colored traditional clothes. On closer investigation, I was surprised to discover that she was in her early 20s – wearing a modern short dress with her embroidered tribal clothes on top.

As she balanced her baby in one arm, she expertly worked her mobile phone with her hand. I couldn’t help but smile to myself. Perhaps if there are some young people immune to the appeal of big-city life, who find ways to preserve their ethnic groups’ unique traditions, they might not be lost forever. Either way, the flood of tourism is coming for these undeniably beautiful areas of China, and I would recommend going to enjoy it before the rush.