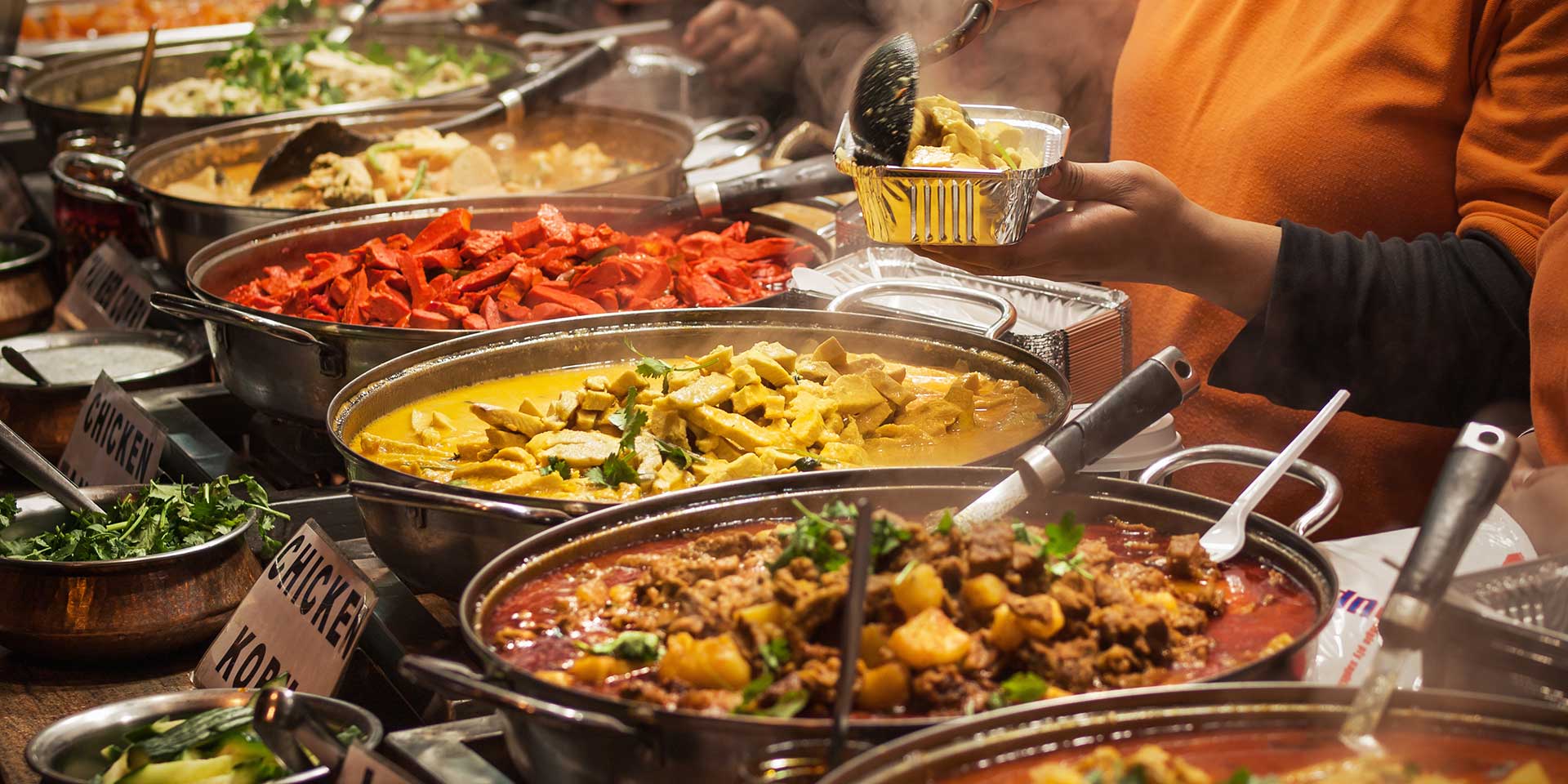 It’s an individual choice – that dish you crave when you’ve been away from home for too long. Or the food you hanker after when you’ve had a long day, or when the weather turns colder. Comfort food, the cuisine nearest and dearest to our hearts, varies from nation to nation and even city to city, depending on staple ingredients, national flavors and a few other, harder-to-pinpoint, factors. Across Asia, comfort foods are as varied as the countries they come from and provide interesting insights into the cultures to which they belong. Join us on a cozy culinary tour as we identify the go-to favorites from seven Asian countries, discover a little about what goes into the them and where you can try them for yourself.

Served alongside dim sum, cha siu bao is a soft bun, which is filled with pork (traditionally tenderloin) and either steamed or glazed and baked. The meaty filling – the cha siu – is slow-roasted, diced and soaked in a syrupy mix of hoisin and oyster sauces, sesame oil, vinegar, shaoxing wine and sugar. Though dim sum houses were around in Guangzhou, and made their way to Hong Kong in the late 19th century, it’s thought that the baozi (buns) were integrated into the menus around the 1920’s, and the original and favorite filling – beloved by the Cantonese – has always been the cha siu.

Where to eat it: the North Point branch of Hong Kong’s famed Tim Ho Wan is the place to go for your fill of these stuffed delights. Since 2009, chef Mak Kwai-Pui has been gathering Michelin stars for his dim sum joints, and one bite into the fluffy bao is proof that those awards are evolving to recognize local tastes.

Ramen is Japan’s ubiquitous noodle soup. A hearty-yet-light meat- or fish-based broth is flavored with miso or soy sauce and packed with Chinese-style wheat noodles and toppings like sliced pork, scallions, egg and dried seaweed. Its history is contentious: was ramen originally a Chinese dish, or was it invented in Japan? Either way, its popularity in the country (and around the world) is undeniable, from the late night street-side stalls – where blue-collar workers slurp from bowls of the restorative broth – to the instant-cup ramen favored in times of disaster.

Where to eat it: Saikoro in Nakano, Tokyo is run by Koitani-san, a ramen legend. After closing Bassanova, his original shop, he rewrote his recipe and now serves thick eggy noodles in a meaty broth with a hint of fish – a flavor that’s deep and smoky and the locals say tastes just like old-style Tokyo ramen.

This meaty salad boasts all the balance of flavors for which Southeast Asian cuisines are so loved. Minced chicken, pork, beef, duck or fish is poached and then mixed with lime juice, fish sauce, chilli and mint – with ground roasted rice added for a crunchy texture. It is usually eaten as a part of a set, often with papaya salad and almost always with sticky rice. Not only the unofficial national dish of Laos and a true Laotian comfort food, laab is widely enjoyed in Thailand thanks to the spread in popularity of Isaan food. At one time, Laos and Thailand’s northeastern Isaan province were part of the the same country. Explore the cuisine of Laos and its fascinating history further in our Laos food guide.

Where to eat it: at Ock Pop Tok’s Living Crafts Center in Luang Prabang, the Silk Road Cafe overlooks the Mekong river from its eastern bank. Though the menu stretches all across Asia, the local dishes are the stars – especially the fish laab. Find it on Ban Saylom (opposite Phousi market). Alternatively, sample authentic laab at Baan Silipa, the charming alfresco restaurant at Sofitel Luang Prabang – one of the city’s most beautiful colonial hotels.

This tasty dumpling native to Tibet, Sikkim, Bhutan and Nepal shares similarities with Chinese jiaozi and Japanese gyoza. A doughy casing is filled with ground meat – traditionally water buffalo – with onion, garlic, ginger, cumin and other herbs and spices. In more recent times, chicken or lamb has been used, as well as vegetables, paneer cheese or mashed potato. The dumpling is closed in a crescent shape and then either steamed or fried. With its popularity centered around Kathmandu, you could be forgiven for assuming momos originated there, but the most widely-accepted story is that they were invented in Tibet and came to Nepal with the Newari traders from Lhasa, who settled in the Kathmandu valley.

Where to eat it: Perhaps then, for these historical reasons, Yangling Tibetan Restaurant at Saat Ghumti Marg is considered one of the best places in Kathmandu to sample momos. For a more up-market experience, Le Trio offers superb momos, accompanied by charming hospitality that has seen it become one of the top 5 restaurants in Kathmandu. Alternatively, try them as part of a sumptuous authentic Nepali banquet at Krishnarpan, the slow-food restaurant at Dwarika’s Hotel.

This Indonesian take on Asian fried rice is distinctive due to its aromatic, earthy and smoky flavor. Pre-cooked rice is stir-fried with sweet soy sauce, shallots, garlic and shrimp paste. Often additions of chicken or prawns and egg are made for extra heartiness. Like its counterparts across Asia, the dish was originally developed as a simple way to avoid wasting rice. Frying it is a way to kill any microbes, and the addition of sauce and ingredients historically came from common leftovers.

Where to eat it: Sit down to a satisfying plateful of authentic Nasi goreng in a tropical garden at Poppies, located in Kuta, on the beautiful island of Bali.

This bowl of hearty noodle soup is enjoyed for breakfast, and sometimes lunch, in southern Vietnam, and at any time of day in the north. Pho broth is traditionally made from simmering beef-bones with oxtail, charred ginger and garlic- often for up to 24 hours. Flat, linguini-style noodles are added along with slim cuts of lean beef as well as a few fattier chunks – plus lots of greens, herbs and vegetables on the side. These are added to taste, along with hoisin and chilli sauces and a squeeze of lime. Chicken pho is increasingly popular, but the concensus is that beef is the original and the best. The now internationally-beloved hangover cure originated in the villages of Vân Cù and Dao Cù, in Nam Định Province, south of Hanoi in the early 20th century, when it was sold at dawn and dusk by mobile hawkers to the textile workers.

Where to eat it: Head to Phở Bat Dan, on the street of the same name in the heart the old quarter of Hanoi, for their famous pho. This no-frills restaurant has been established since the 1960’s, and serves only beef, yet it still retains the original taste of when it was first introduced. The broth is clear and rich, the beef is tender and soft with a glowing pink hue – and the queues are worth it. Alternatively, for a more luxurious pho experience in Hanoi, sample the delicacies served up in Spices Garden, the Vietnamese restaurant at the peerlessly elegant Sofitel Legend Metropole.

Plov – or pilaf – is a staple of Central Asian countries, each having their own version. In Uzbekistan, rice is simmered in a rich stew of meat and vegetables, seasoned with spices including cumin, coriander and peppers, and kept in a covered pot until all the juices sink into the rice. Usually browned lamb meat is used, along with carrots and onions, but sometimes it is made with lean horse meat. Dishes of meat and rice are mentioned in texts dating back as early as the ancient Hindu epic Mahabharata, and Alexander the Great was served pilaf at a banquet to celebrate his capture of what is now Samarkand. Later, the dish was a staple among Soviet countries and became commonly known as a Soviet cuisine.

Where to eat it: The Central Asian Plov Centre, on the corner of Abdurashidov and Ergashev in Tashkent, is the ultimate destination to taste Uzbek plov at its finest. Past the kazans (simmering cauldrons), take a seat inside and tuck into a single plate as a group. The choicest servings can be found before noon and the best cuts are traditionally used on Thursdays.