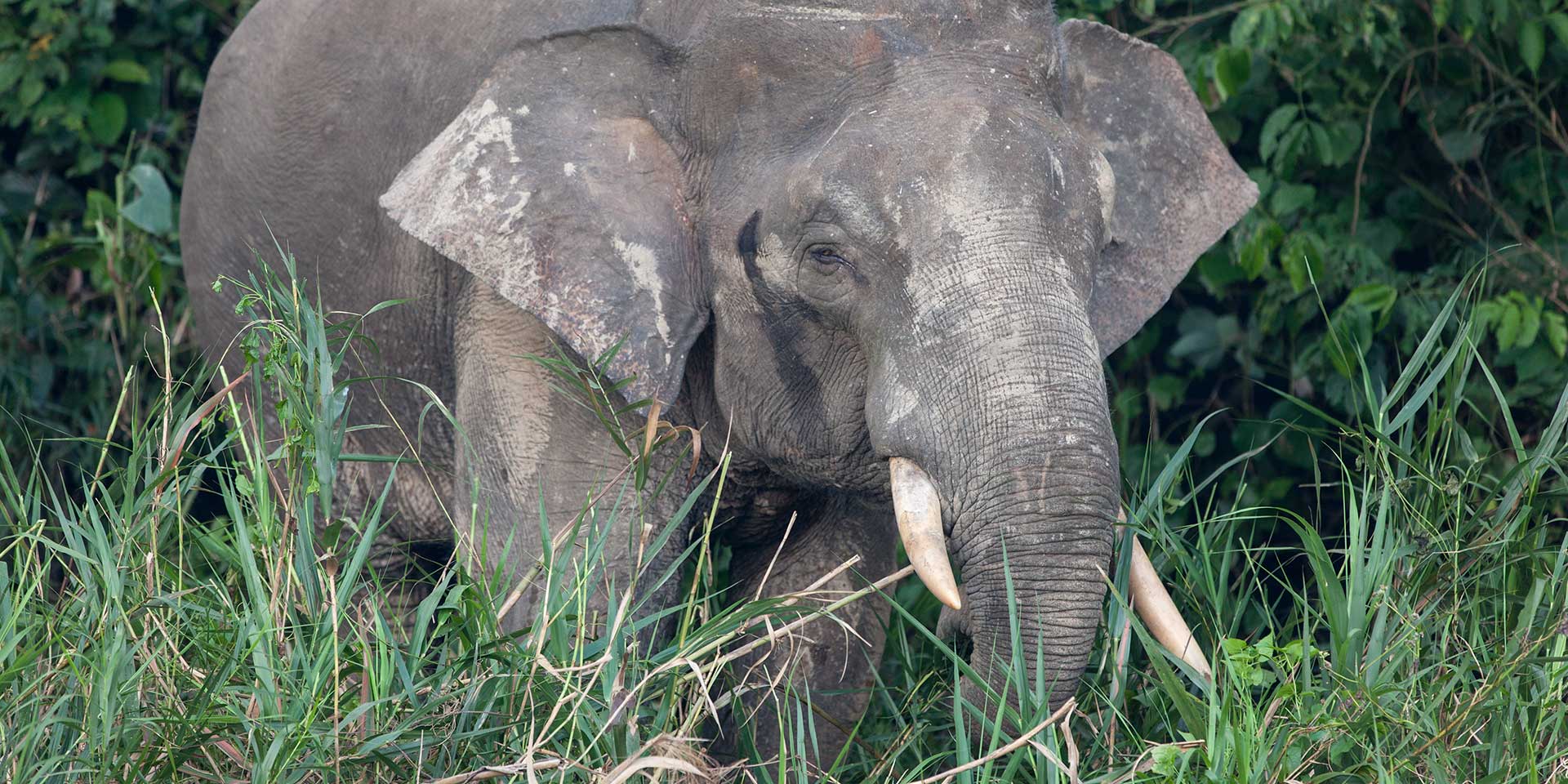 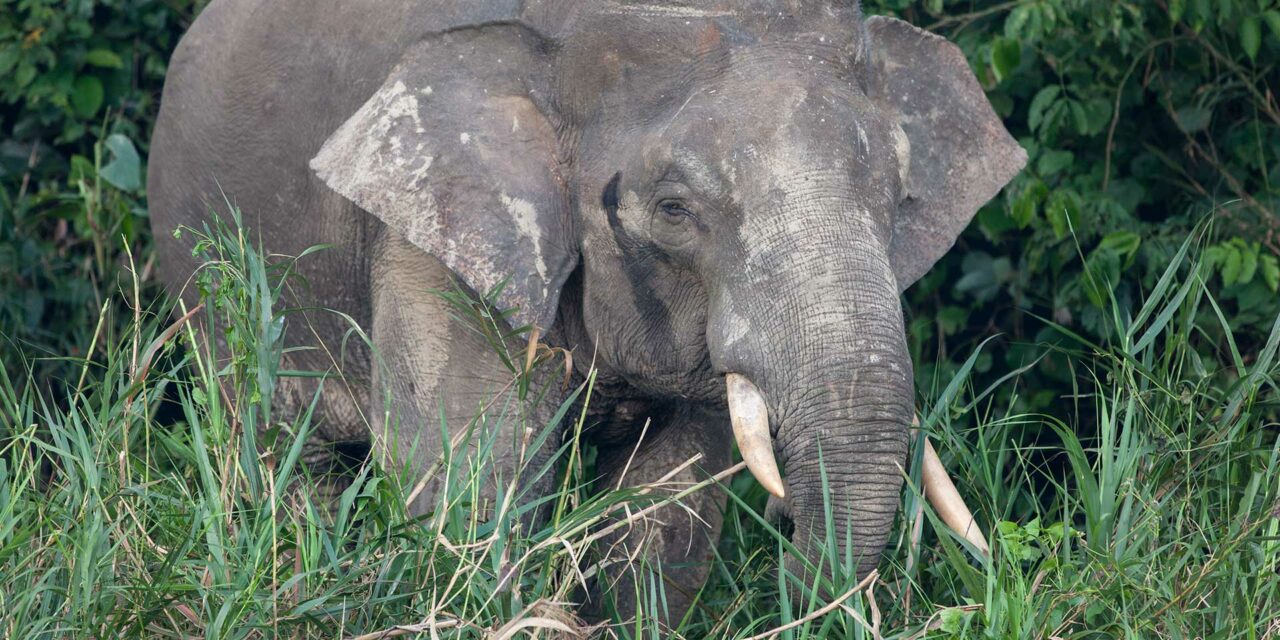 They have shorter trunks, rounder faces, longer tails, and smaller tusks than their Asian cousins, but what really sets the Borneo pygmy elephant apart from the herd – apart from a reputation for friendliness – is no one is really sure how it got there.

One account says the elephants were a gift to the Sultan of Sulu, another that it evolved naturally in Southeast Asia, yet another that the originals were of an extinct Javanese breed. But, to really get to the heart of the Bornean pygmy elephant, you need to go to its home, and the best vantage is from the Kinabatangan River.

There are few places on Earth where one might suggest that rare, wild, genetically fascinating elephants wouldn’t be the highlight of the trip, but the 560-kilometer Kinabatangan River is quite a place. The river itself is a lazy one that flows slowly through some of the most interesting wildlife in Malaysia.

ABOVE: The origins of the distinctively adorable pygmy elephant of Borneo are somewhat of a mystery

Elephant sightings on the Kinabatangan aren’t exactly rare, but visitors might be pleased to know that they’re likely to spot an orangutan or two as they pass.

Speaking only of primates, which are best seen late in late afternoon near the water’s edge, the curious-looking proboscis monkey is a common sight, as are macaques and occasional gibbons. The lush rain forest trees overhang the river, so it’s not uncommon to see the these great ancestors of ours playing, fighting, and getting up to mischief as your boat passes through.

Pygmy By Name, But Not By Nature

ABOVE: Among the recognizable differences of pygmy elephant are their round faces, short tusks, and long tails that almost touch the ground

The river is one of the best places in which one might see the Bornean elephant, but with only a few thousand in the wild, it’s far from a guarantee on your average, run-of-the-mill river cruises. Keen travelers are best looking in the lower Kinabatangan floodplain, but the elephants are know to travel as far as Indonesian state of East Kalimantan. Those hopping off their boats will want to checkout the lowland forests just before the wet season.

Compared to other Asian elephants, the pygmies aren’t that much smaller, if at all, but they do look a bit more rotund in stature compared to those found in Sumatra and the Malaysian Peninsula. An adult male Pygmy elephant can grow up to over eight feet high; a mainland Asian elephant is little more than a foot taller.

ABOVE: The range of the pygmy elephant is quite limited but its habitat is among the most biologically diverse in Borneo.

Alongside their massive vegetarian diet s bulk around, the Pygmy elephant can eat up to 330 pounds of vegetation a day, feeding on a wide variety of palms, grasses, tree bark, roots, leaves, and wild bananas.They also consume up to 53 gallons of water a day and rely on salt intake from nearby mineral deposits supplement their diet with minerals obtained from salt licks deposits – one of the main reasons these inscrutable beasts may be restricted to such a small territory. Despite the lack of salt, Borneo is the ideal environment for the Asian elephant: hot, humid, and prone to flooding. But the picky pygmy confines itself to the northeastern tip of the island.

From Whence They Came

That’s one answer, but there is another, a more exciting story, one of ancient Rajas and Sultans

Although the Asian elephant has a wide distribution this genetically distinct subspecies, the Bornean Pygmy Elephant, can only be found – as the astute among you may have guessed – on the rugged island of Borneo. The pygmy elephants that frequent this area were once native to Java, where they are now extinct, but their ancestors were judged to be alive and well in northern Borneo in the early 21st century – which in turn has led to new thinking on how the elephants, genetically similar to those from Java, came to the area.

As to how it got there in the first place is a complicated question. The short answer is no one is exactly sure. One theory, grounded in traditional evolutionary biology, follows the findings of a 2003 report by the WWF, Columbia University and Sabah Wildlife Department, which showed that Pygmy elephants are genetically distinct from other Asian elephants, therefore a new subspecies and a conservation priority.

According to the DNA evidence, these elephants migrated to Borneo from Asia and Sumatra about 300,000 years ago, but drowned land bridges at the end of the last Glacial Maximum or Ice Age 18,000 years ago left the Pygmy to develop in isolation, evolving its signature more stumpy look.

That’s one answer, but there is another, a more exciting story, one of ancient Rajas and Sultans.

A Gift to the Sultan

The Sultan housed most of his herd on Jolo, then the capital of the Sultanate of Sulu and now a part of the Philippines

In 1395 it was documented that the Raja of Java gave two elephants to the Raja Baginda of Sulu. Introduced into western Borneo, it is rumored the pair were the founders of a feral herd of elephants that were hunted and transported to the flood lands in northeast Borneo. This fascinating idea is, however, contradicted by the fact there is no evidence of Borneans ever having practiced hunting and transporting elephants. It is, however, technically possible for just one male and one female elephant, left to their own devices, to create a population of 4,000 in under 600 years.

Another very similar and popular story comes from a Syrian-born American living in the Philippines, who wrote the elephant was introduced – again because of diplomatic relations – when hundreds of Javanese elephants were presented as gift to the Sultan of Sulu from the Sultan of Java. Another version cites the East Indian Company of Great Britain as the generous benefactor, much later in 1750.

The Sultan housed most of his herd on Jolo, then the capital of the Sultanate of Sulu and now a part of the Philippines. But, due to a lack of real estate on Jolo, a small number were sent to the northeast of Borneo to become a valuable part of the thriving ship-building industry, transporting tons of felled trees from deep within the rain forests to the coast.

Even with modern scientific research and pertinent historical evidence, no story has emerged as completely accurate, ensuring, for the time being, the origins of the pygmy pachyderm will remain a curious mystery.

However they evolved, however they found their way to the loud, colorful rain forests of Borneo, these gentle Bornean beasts seem at home.