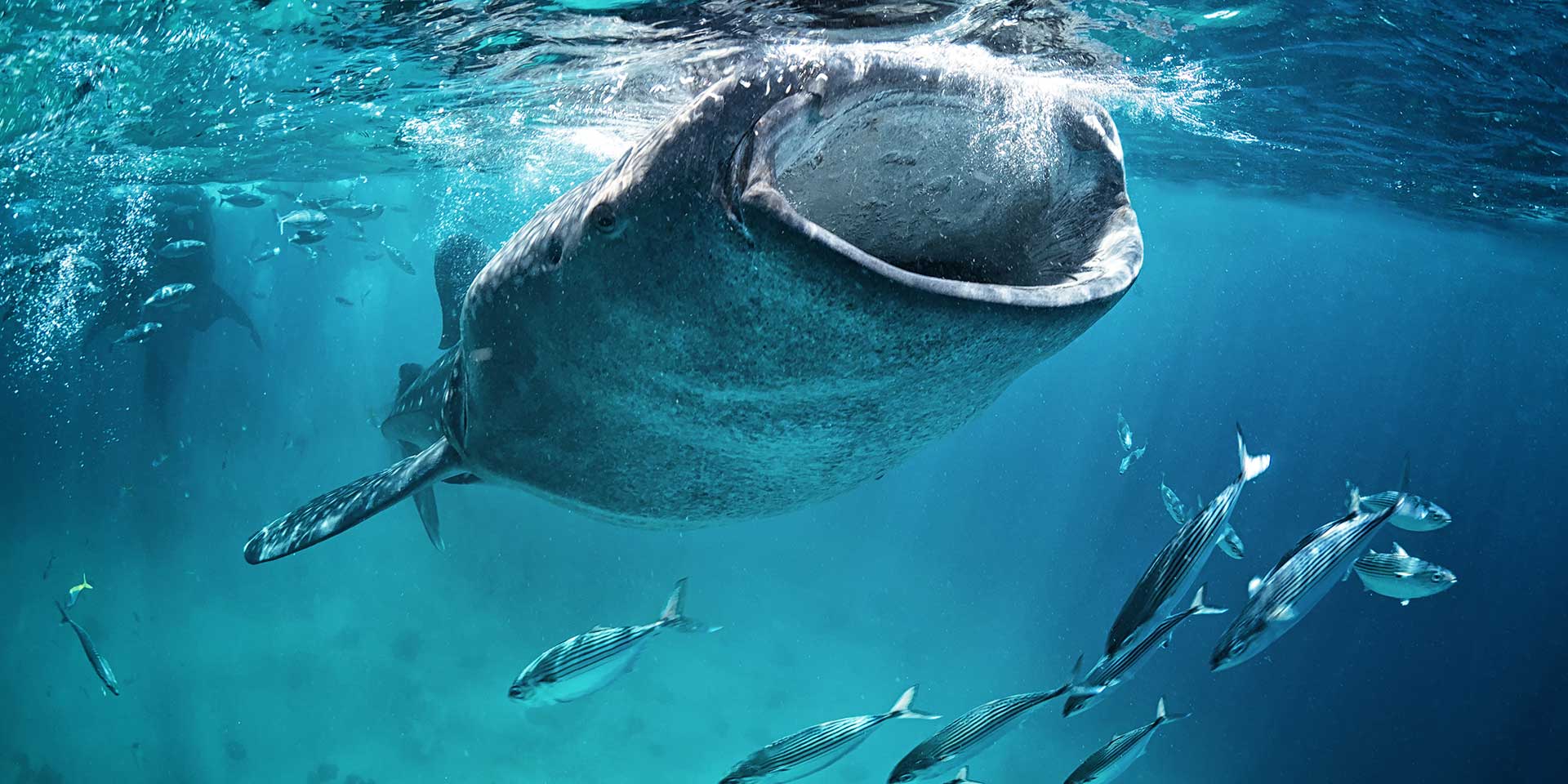 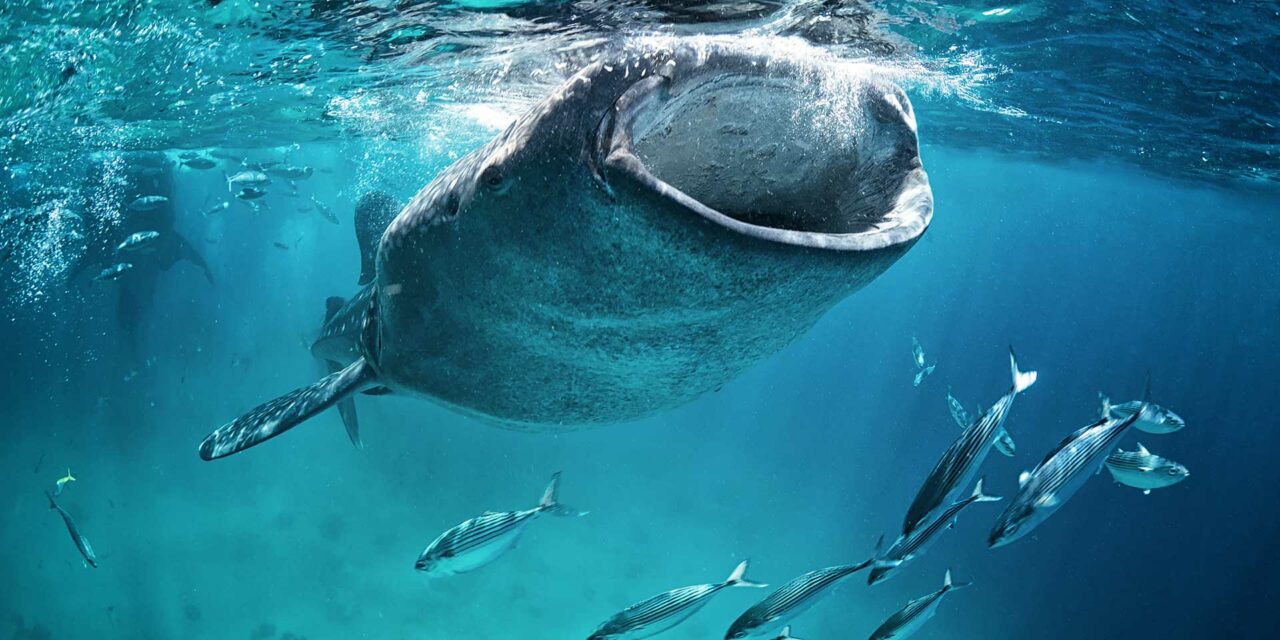 An archipelago of more than 17,000 islands around which the South China Sea, the Pacific Ocean, and the Indian Ocean converge, Indonesia is spread over more than 5,000 kilometers – from Sumatra in the west, to Papua in the east. And the scenery is just as pleasant underwater.

Indonesia lies at the heart of what has been recently termed the Coral Triangle, and its waters are an epicenter of biodiversity, home to the richest variety of sea life on the planet. Indonesia hosts all manner of tropical creatures beneath its waves, including every member of the aquatic Big Five: the whale shark, manta ray, mola mola, hammerhead shark, and the tiny pygmy seahorse. With careful planning, in Indonesia, it is entirely possible to see all of them in one trip.

Eric Madeja is a Swiss expedition leader and naturalist based in southeast Asia. He’s been exploring the waters of Indonesia for almost 20 years, and even now says it hasn’t lost a bit of its magic. “Apart from being a great adventure,” he says, “a marine expedition to any part of Indonesia will provide you with the opportunity to observe unusual, rare and elusive wildlife.”

ABOVE: The Whale Sharks of West Papua.

The largest fish on the planet, the whale shark (rhincodon typus) is a true giant, which can grow in excess of 40 feet long. Despite their intimidating size, they are relatively placid and, luckily for us, only eat krill and baitfish.

See them at: Cenderawasih Bay Marine Park in west Papua, one of the best locations in the eastern hemisphere to get a guaranteed close-up encounter with some of the largest whale sharks in the world. Unlike other areas, where the congregation of these creatures is transient – like Christmas Island, the Red Sea, Galápagos and Belize – their presence here is a daily occurrence all year round. Eric explains why: “The reason that they are so easy approachable at Cendrawasih is because the bay is the home of many Bagan fishermen.” Bagans are semi-mobile floating platforms equipped with a large net to catch small baitfish. There are about 23 bagans around Kwatisore village, at the southern end of the marine park, and at dusk each night the nets are lowered to about 60 feet. Overnight, surface floodlights attract schools of anchovies and other small fish into the nets, which are full by morning. “Whale sharks happen to like anchovies too,” Eric adds, “and the fishermen traditionally share some of their catch with the colossal visitors.” The cold-blooded giants are natural filter-feeders and have learned to suck the small fish through the nets. At peak feeding times, up to 10 whale sharks can be found happily hanging vertically by their massive fleshy mouths, slurping at the nets, oblivious to – or certainly unbothered by – anyone’s presence.

ABOVE: Manta ray filter feeding above a coral reef in the blue Komodo waters.

Also filter feeders, Manta Rays are divided into two species – reef (or manta alfredi) and oceanic (also known as manta birostris). Distinctive for their vast “wingspan”, manta rays travel through the water by pulsing their pectoral fins, and the largest of the oceanic species can grow to up to 23 feet in width.

See them at: Komodo National Park, where there’s a rare opportunity to see both species together. Though manta rays have historically been targeted by the commercial fishing industry, the Indonesian government has, in recent years, introduced a ban. They realized, as Eric points out, “that a live manta ray can generate approximately 2000 times more revenue through scuba-diving tourism than a dead manta ray sold on a fish market.” There are various hot spots for manta ray sightings throughout Indonesia, but one of the most scenic is Komodo National Park, a destination best known for its terrestrial giant lizard – the Komodo Dragon – but it’s in the water that you’ll find the real action. In Eric’s opinion, “Nothing compares to having a 1000-plus kilogram, four meter-wide giant oceanic manta ray gliding just inches over your head.”

ABOVE: The Mighty Mola Mola

The heaviest of the bony fish, mola mola can grow to weigh up to 5,000 pounds, their strange circular shape reaching 14 feet in length. They are silver in color, with rough skin and a dorsal fin on top with anus fins beneath, which they waggle awkwardly to traverse the waters. Their back fin doesn’t grow properly, but rather it folds back on itself to make a kind of rudder. Their teeth are fused to create a beak and they enjoy the taste of jellyfish, confining their interest in humans to polite curiosity. Sometimes known as sunfish, they like temperate waters and can often be found basking in the warm rays near the surface having been hunting in the cooler waters.

See them around: Crystal Bay in Bali. Thanks to beautiful sunshine and open ocean waters, Bali is one of the few locations worldwide where you can have a close encounter with this harmless giant. Eric describes the first time he came into contact with a mola mola: “I was mind struck. Imagine a round-shaped, flat, gigantic fish head of the size of small car with tiny eyes, a small mouth and no body. I remember thinking that halfway through, its creator must have gotten a phone call, and just never returned to complete it.”

ABOVE: A Hammerhead Shark patrols the waters off Pulau Ai

This group of sharks in the family Sphyrnidae get their name from their distinctive flattened heads, which extend width-ways. This “hammer” shape is known as a cephalofoil and experts suggest various functions for it – including sensory reception and the detection and manipulation of their prey. They have a varied diet including fish, squid and crustaceans, but their favorite meal is stingray. They can grow up to 20 feet in length and travel together in schools by day, but hunting alone at night.

See them at: Pulau Ai in the Banda Sea. The waters around the island boast some of the best reefs in Banda and the area south of Pulau Ai is renowned for sightings of this giant, earning it the nickname “Hammerhead Point”. However, these shy creatures tend to keep themselves to themselves, wary of noise and action, so you’ll need experienced guides with good knowledge of local currents and seasons to get close. But the time and patience are worth it, as Eric attests: “What first looks like just shades of blue moving in open water, soon becomes an armada of some pretty large fish, gracefully swimming past, always keeping an eye on you. This is a thrilling experience not to be missed.”

ABOVE: A pygmy seahorse uses its tail to cling to a gorgonian

Endemic to the Coral Triangle, these tiny critters grow to only one inch in length and yet remain high on divers’ wish-lists. There are seven species to see, each with its own distinctive features. Pygmy seahorses differ to other small and larger seahorses in two respects: they have a single gill on the back of their heads (while other types have two either side) and their babies are brooded in the trunk of the male, rather than in the tail. They feed on tiny crustaceans and are masters of camouflage.

See them at: Raja Ampat, where the gorgonian sea fans in which they often live are abundant among the coral. A very different experience to an encounter with any of the rest of the big five, scoping out a pygmy seahorse takes practice and a good eye; indeed many underwater explorers take a magnifying glass to help locate them, and to get a better look when they do. Efforts are rewarded though, and Eric says, “the proudest and happiest divers I have ever seen are the ones who had found their first pygmy seahorse on their own.” Explore the waters of Indonesia, where the vast range of sub-marine terrains teem with exotic sea life, and venture across the archipelago to check these fantastic creatures off your bucket list. From some of the planet’s best coral reefs to clear ocean waters, and from wrecks to muck, the diving here is considered world-class. However, most of our aquatic Big Five can usually be spotted relatively near the surface – a snorkel will serve you almost as well as a diving license on the trail of these treasured creatures. So, an underwater safari adventure could be just as exciting for the non-divers in your group.

Special thanks to Eric for his expert advice. Eric Madeja is a multi-award winning photographer with expertise on the marine environment and the co-author of “The Coral Triangle” book. He is a SONY Alpha Pro Photographer Ambassador and regularly leads photography expeditions to Indonesia, Philippines, Malaysia, Brunei, Timor Leste, Papua New Guinea and the Solomon Islands. He also provides one-on-one underwater photography tuition.