Despite their close proximity to the metropolis that is Hong Kong, the nearby islands of the South China Sea have a relaxed, almost tropical feel far-removed from the fast-paced lifestyle of Hong Kong. Indeed, the waters of the South China Sea are filled with islands large and small, some with fishing villages, while others are home only to isolated beaches and coves where one can swim, wake-board, and sunbathe for hours with not a soul in sight.

Particularly noteworthy sights include Lantau Island's Giant Buddha, among the largest of its kind in the world; windsurfing at Big Wind Bay; and exploring the outlying islands of Hong Kong aboard your own Chinese junk.

Spend the day exploring Hong Kong's outlying islands aboard your own luxurious, motorized Chinese junk — a type of boat traditional to the region. Dating back millennia and still in use today, the junk is a type of traditional wooden fishing boat whose innovative sail and hull designs would later influence Western shipbuilding.

Spend the afternoon on Lamma Island, a traditional fishing island which doubles as an outpost for Hong Kong's creative, bohemian community. Explore the island's small communities which are linked only by a series of footpaths that cross lovely open hills with views over Hong Kong and the surrounding waters. End up in Yeung Shue Wan, where small boutiques, cafés and Western-style bars mix with traditional seafood and produce vendors.

Spend time outdoors on Lantau Island, Hong Kong’s largest island, more than half of which is National Park land with popular hiking trails. A marine park off the north coast of the island was established to protect the water’s Indo-Pacific Humpback dolphins, which are more commonly known as Lantau’s “pink dolphins.”

While it was once but a small monastery tucked in the wilds of Lantau Island, Po Lin Monastery shot to prominence in 1993 after the construction of a giant Buddha statue, which measured 111 feet (34 meters). From the base of the statue, visitors can enjoy soaring views of the island and the surrounding seas; within the walls of Po Lin itself are a pleasant garden, as well as ornate Buddhist iconography.

Stop on Tung Lung Island, which is largely uninhabited and protected as a special park region for its lovely landscape and great hiking and rock-climbing opportunities.

From Tung Lung, sail up to Sai Kung peninsula and go windsurfing at the spectacular Big Wave Bay with its wide strand of beach and dramatic mountainous backdrop. Windsurfing is the only sport for which Hong Kong (independent of China) ever won an Olympic Medal, when Lee Lai-Shan took home gold from the 1996 Summer Olympics in Atlanta. 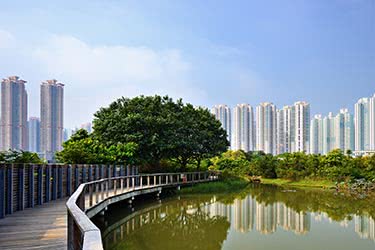 Hong Kong for the Ladies – The Perfect Girl’s Getaway

For ladies looking to combine glamour, style, and fun, a trip to Hong Kong has it all.

Welcome to the Jungle: Adventures in Borneo

As the world’s third largest island and located in the heart of South East Asia, Borneo remains a wondrous destination for explorers, with an unspoiled paradise waiting to be rediscovered…

Coast and Kids: Thai Beach Holidays for the Family

The tropical Gulf of Thailand and the Andaman coast aren’t just for the adults; the excitement, adventure, and adrenaline are ideal destinations for the whole family, full of amusement and amazement for kids of all ages.