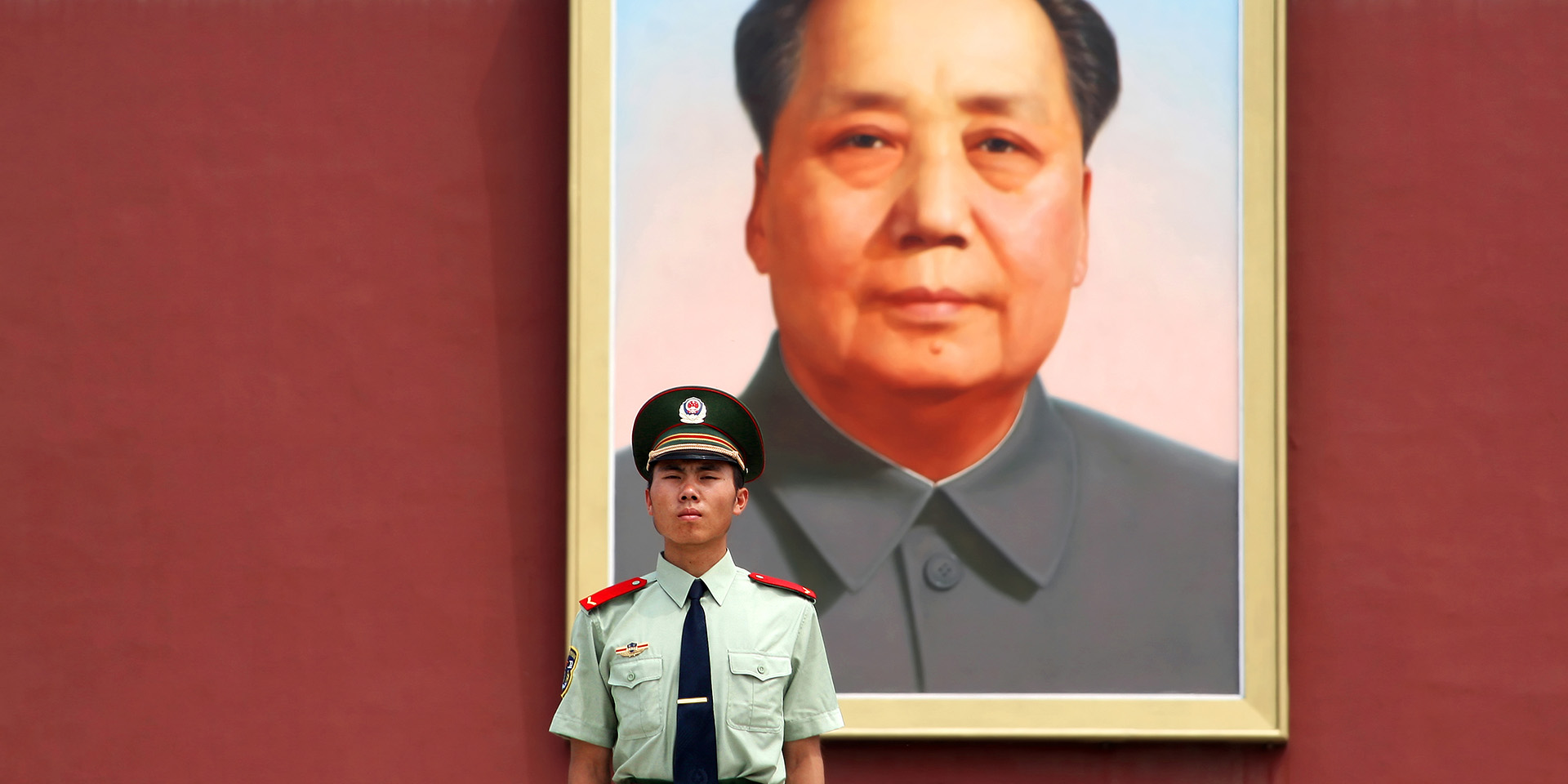 Arise, fellow workers! Destroy the paper tigers of the West! Eschew the bourgeois capitalist roaders! The East is red! Well, it’s sort of red – let’s call it pinkish, with gilded edges. Indeed, China’s turn to capitalism was made at a breakneck pace to both the delight of chagrin on their trading partners around the globe. But, for many a modern traveler, both foreign and domestic, it is the tumultuous modern history of China that so fascinates – the Great Leap Forward, the Cultural Revolution, a philosophy triumphant – giving rise to what is known Red Tourism. Much has been lost, but so, so much remains.

Unbeatable Paths for the Beijing Bicyclist

Unfortunately, modern Chinese consumerism is taking the form of gaudy indoor malls that share design aesthetics with their counterparts in Omaha City, albeit on a much larger scale. But for the traveler wanting a more engaged, hectic experience, spiked with the opportunity to come across genuinely Chinese treasures, the Panjiayuan market is a must.

One of the few remaining cultural Silk Market shopping areas in Beijing, Panjiayuan is a great place to find Mao buttons from the Great Leap Forward, revolutionary propaganda posters from the Cultural Revolution, and all manner of rare photographs.

ABOVE: Mao antique ceramics at the Panjiayuan Market in Beijing.

Sure, there’s no shortage of fakes and replications – cause, you know, China – but there are also extremely valuable items like books signed by Zhou Enlai and rare posters with market values over $25,000. Whether a patriotic poster of the Red Guards or a Mao-era trinket, every guest is certain to find something they like, even if that’s just the thrill of haggling with vendors.

ABOVE: The Writer’s Bar played an early role in the birth of modern China.

Between the fall of the Qing Dynasty, the Second World War, and the eventual Communist Party’s rise to power, a great deal of Beijing was lost – the Beijing Hotel, however, was spared. Originally built in 1917, the hotel is directly adjacent Tiananmen Square and offers views of the Forbidden City. Over the years, the hotel has hosted a number of individuals who had the audacity to attempt ruling over the Middle Kingdom. From Japanese conquerors to Communist cadres, many key meetings with the likes of Chiang Kai-shek and Zhou Enlai took place in the hotel’s gorgeous Writer’s Bar.

The room is complete with a flawlessly preserved wooden dance floor from the 1920s, atop which it is rumored Mao Zedong himself let his dancing shoes take the lead – though whether he moved from the hips or shoulders remains a mystery.

At any rate, the Writer’s Bar is the setting of an iconic afternoon tea ceremony, complete with vanilla scones and Chinese guzheng performances. The room is framed by French windows, opulent chandeliers, and gorgeous furnishings. There is even a century old Bösandorfer piano. In short, the Writer’s Bar is overflowing with history. The site of countless first exchanges between Chinese officials and Foreign dignitaries, the Writer’s Bar is a key part of Beijing’s historical legacy. It also serves great cocktails, and there is a plush Chairman’s suite for those looking to embrace the irony.

ABOVE: Quite apart from the Forbidden City, the Gate of Heavenly Peace is remembered for its role in creating modern China and, of course, the iconic portrait of Chairman Mao.

Many people talk about Tiananmen Square when they’re actually referring to the Gate of Heavenly Peace, let’s break down the difference: the square is where tourists stand and old ladies do line dances, the Gate is the red building that serves as the entrance to the Forbidden City.

Originally constructed during the Ming dynasty in 1420, it has been destroyed and rebuilt several times and serves as a key national symbol for the country. Over the past 100 years, the Gate has showcased portraits of Sun Yat-sen, Chiang Kai-shek, Mao Zedong, and even Joseph Stalin. Today, Tiananmen Square and the Gate of Heavenly Peace are separated by the massive Chang’an Avenue motorway. The road is expansive, loud, and busy. Guests move between the two areas via an underground tunnel. But during the dusk and dawn flag ceremonies, the road is temporarily shut down and an almost suffocating silence sweeps over the square.

ABOVE: Design on the Gate of Heavenly Peace.

A color guard unit marches out from the Forbidden City, across Chang’an Avenue, and over to the flagstaff to raise or lower the national flag. The soldiers march in step, and the overpowering sound of their crisp, uniform footsteps cuts through the air, instilling a sense of awe. These flag ceremonies are a surreal demonstration of pride by the party that won the right to rule over the most populous nation in the world. It is a must-see event.

ABOVE: Mausoleum of Mao Zedong, opposite the Forbidden City.

On the side of Tiananmen Square opposite the Forbidden City lies a grand mausoleum – the final resting place of Mao Zedong. Work on the mausoleum was prompted after the Chairman’s unexpected death. It was a time when the country’s relations with their one time ally the USSR was fraught and the nation was in the depths of its chaotic Cultural Revolution.

ABOVE: Monument of Mao’s Mausoleum

Nearly 400 people were rushed over to keep the Chairman’s body cool for the eight days that separated his death and embalming. A competition was held between factories to find a crystal coffin to carry the Great Helmsmen, and by early 1977 a winner was crowned and the doors of the Mausoleum of Mao Zedong were swung open to throngs of Chinese nationals who had arrived to pay their respects. All this occurred in under one year, and even to this day, it is not uncommon for the memorial to receive thousands of victors daily.

Pay heed: the Mausoleum closes before noon, so it is advisable to get their early if you want to see his waxy face and grey suit with your own eyes. This activity pairs nicely with the morning flag raising ceremony.

ABOVE: Though a pale imitation to the monuments in Guangzhou and Taipei, Beijing’s Sun Yat-sen Memorial Hall pays tribute to the “Father of Modern China.”

Outside the major concrete jungle that is Beijing, among the sprawling hills to the west of the capital city, rests the Temple of Azure Clouds. This picturesque Buddhist temple is also home to the Sun Yat-sen Memorial Hall, one of the many tributes to the “Father of Modern China”. The hall houses many interesting artifacts. There is a collection of Sun Yat-sen’s calligraphy, photos, and books. The plaque at the hall’s entrance also bears golden writing as inscribed by his wife, Soon Qingling.

There is also an empty crystal coffin on display. A gift from the USSR, the coffin was meant to hold Sun Yat-sen, but he had already been buried by the time it arrived. Chinese officials even considered using the coffin for Chairman Mao after his death, but the dimensions didn’t line up and so it was left in the Temple of Azure Clouds, where it remains today. 17 miles out of the city proper, this unique destination offers a glimpse into an interesting point in China’s history; a time before the Communists and Alibaba, when the nation’s future was anything but certain. It also offers a respite from the bustle of the urban metropolis. Come to pay respects to the Father of Modern China, stay for the natural scenery and peace of mind.