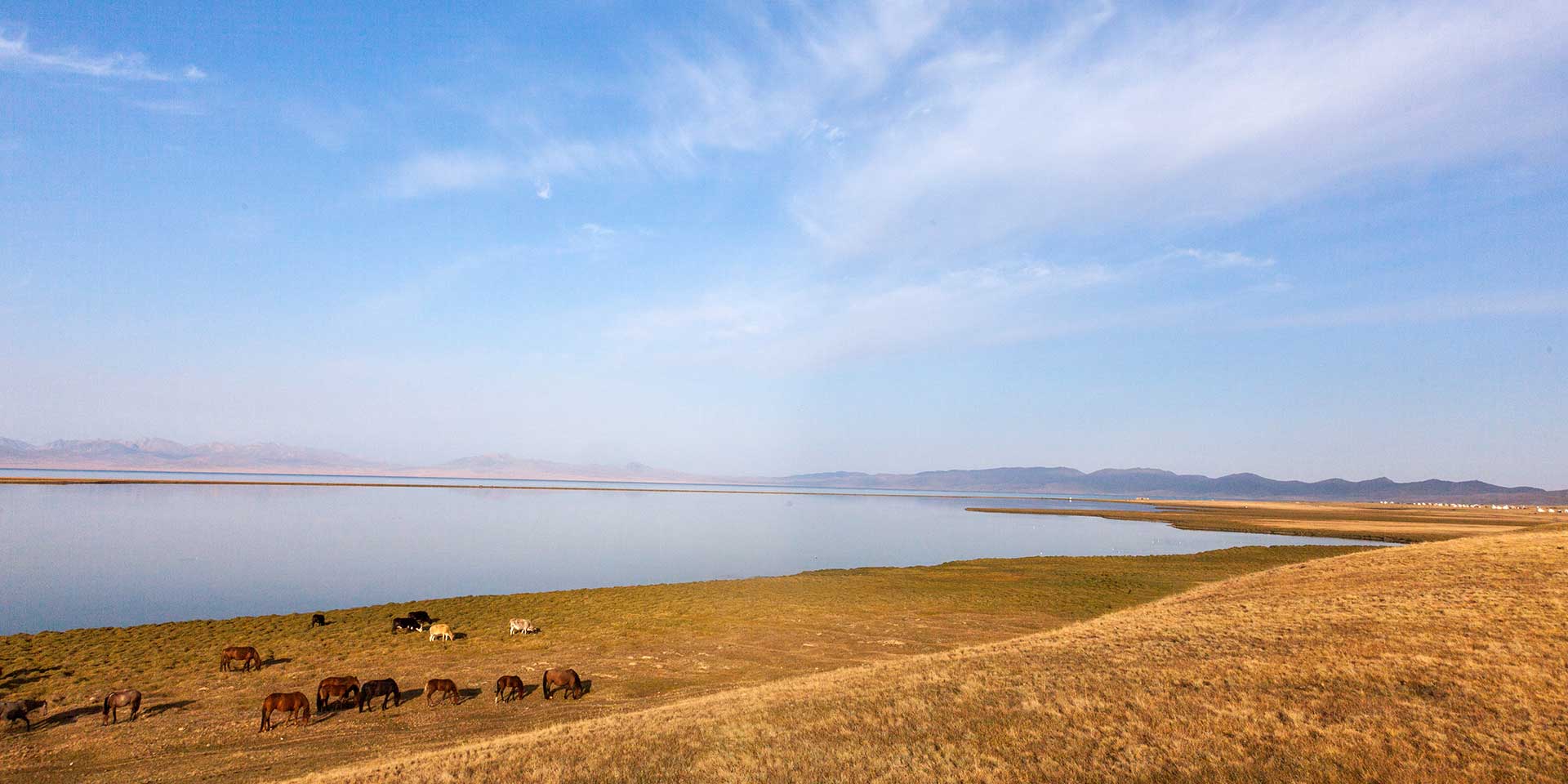 It is, perhaps, fortunate that Kyrgyzstan’s stunning Song-Kul Lake is difficult to access. Any good traveler knows that the more challenging destinations are almost always the most rewarding, and this is very much the case with Song-Kul Lake. The second-largest lake in Kyrgyzstan, Songkul is in the metaphorical shadows of the larger and more popular Issuk-Kul lake, though again, this can be seen as a good thing, for it makes it one of the country’s best-kept secrets.

We set off on our trip to discover and explore the lake, from the hub town of Kochkor. The three-hour drive took us past some of Kyrgyzstan’s most stunning terrain – with rolling hills, valleys, rivers, dotted with herds of yaks, horses, sheep, cows, and even wild marmots. At one point, we pulled to the side of the road and I climbed up a steep hill with my camera. At the top of the hill was a large herd of yaks, who were surprisingly peaceful. I have seen many yak herds in my travels, and normally they either run away or the aggressive males will make moves to protect the herd, so I knew this was a rarity.

As we approached the lake, we stopped to visit a family living in a traditional yurt. Their children ran out to greet us upon our arrival, and they posed sweetly for photos amidst a dramatic background. I could feel the effects of the altitude – the lake stands at 3,013 meters above sea level between two mountain ranges in the Naryn River basin – and the crisp bite of the cooler climate, which was much colder than it had been on Kyrgyzstan’s plains, where we’d been previously. The air was fresh and clean, and I breathed it in deeply. I also noticed that the weather was rather mercurial – we found ourselves going from warm to cold within an hour, and by nightfall, the temperature reached 0 degrees Celsius.

The lake is thought to have been created by the shocks of an earthquake. It is an important migration point for birds, who flock here for the lake’s rich marshlands, which are rich with food. At any given point, one can spot as many as 70 species of birds, including waterfowl. The lake itself is an exquisite gem-colored turquoise blue, reaching a depth of 14 meters. In the summer, Song-Kul lake is blanketed in lush verdant grass, making it a hotspot for nomadic cattle and horse breeders – I saw animals grazing just about everywhere I looked when I was there.

We observed a woman milking horse mares – locals use the horse milk to make Kumis, a fermented dairy product made from horse milk. Kumis is packed with vitamins and minerals, making it an ideal addition to the nomadic diet, particularly when there is no access to fresh vegetables in the summer months. We had the chance to sample some of the freshly-made Kumis with our meals – I found it to have an acidic taste, kind of like milk with vinegar, but it wasn’t all that bad. We also had the chance to try some fresh local cream, made from cow’s milk, which was much more to my liking.

In the afternoon, we saddled up and trotted around the lake on horseback. Kyrgyz horses are smaller than European ones, but larger than their Mongolian counterparts. This makes them ideal riding horses for beginners – though I have to say, mine was quite stubborn!

The yurt camp we were to bed down in that evening was much more basic than the ones I’d previously stayed at in Mongolia. This, I knew, was due to Kyrgyzstan’s burgeoning tourism industry being still very much in its infancy. Still, the basic accommodations were comfortable enough, and I have no doubt that the standards will improve  as the country develops. My least favorite part of the experience was the toilet – it was basically a shed with a hole in the ground, and it smelled like something had died in it!  Our overnight experience in the yurt was a cold one, with temperatures nearing freezing. I layered myself under about 10 blankets, which allowed me to make it through the night in relative comfort.

In the morning, I took a short walk to the lake, where huge herds of horses galloped past me, heading home for milking. I was quite surprised to learn that horses know what time they are meant to be home, and return completely on their own, a sole male leading the way for the group of females behind (this is how most horse herds are led – the male protecting the herds from wolves and other predators). I also spotted sheep and cows flocking home. It was a very special sight.

The lake was lined with numerous yurt camps specifically created to cater for tourists. Ours consisted of only four yurts (though a group of 20 backpackers camped nearby), but many had more. As Kyrgyzstan’s tourism market develops, and more emphasis is placed on higher end experiences, the region will be set for big growth. I feel that Kyrgyzstan has as much, if not more,  to offer than Mongolia, with a similar variety of experiences set to a more dramatic backdrop. Plus, how many people have you met who have been to Kyrgyzstan (or who even know where it is…)?