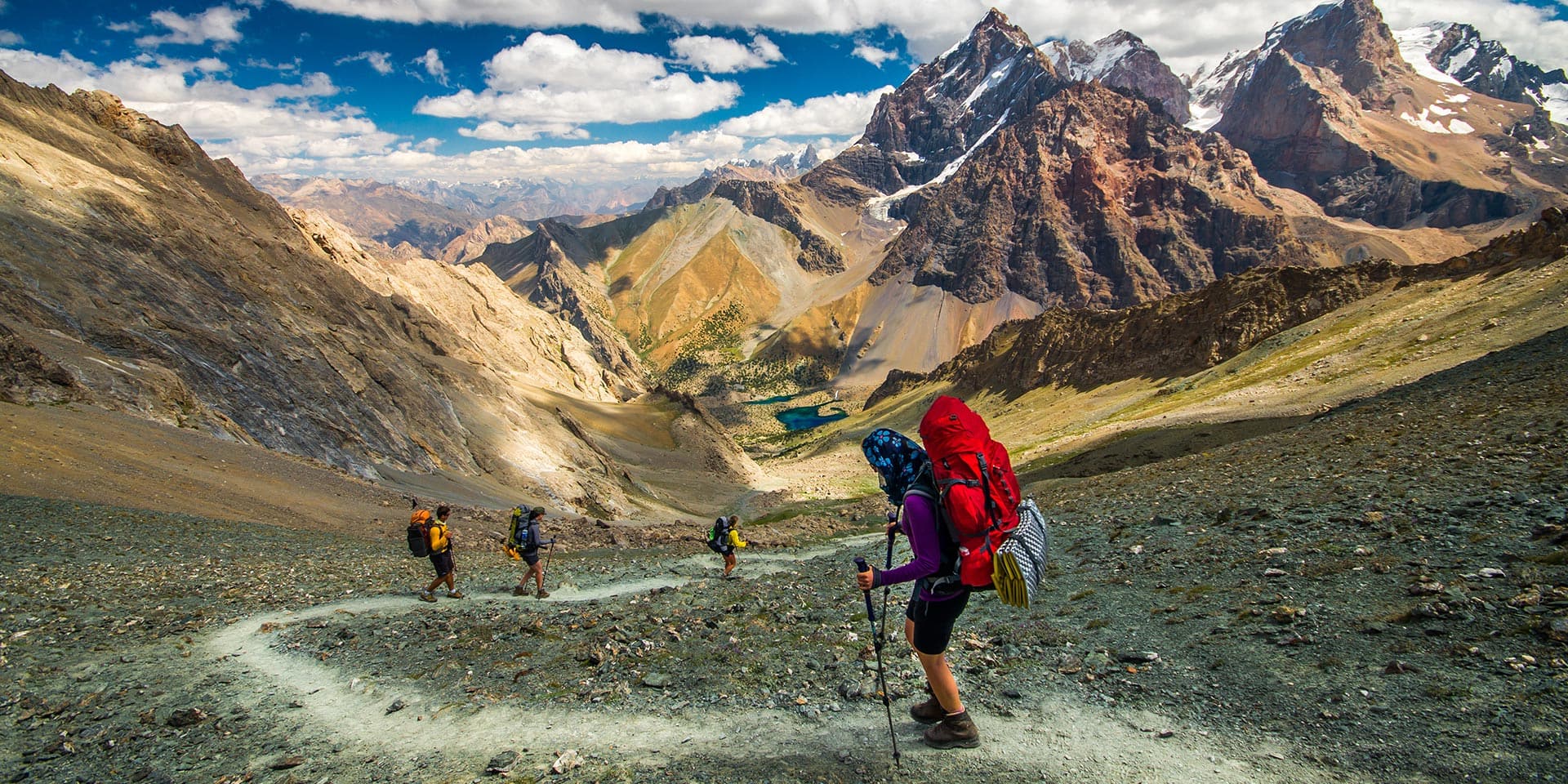 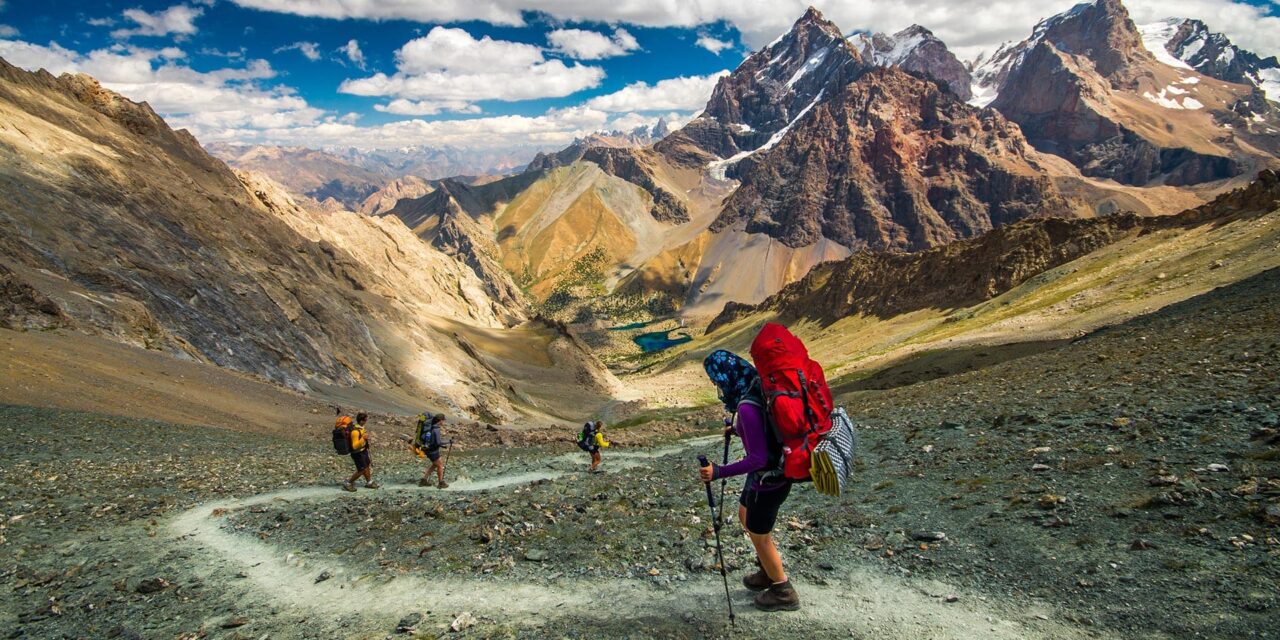 Iskandra, the most popular of Tajikistan’s mountain lakes, was named for Alexander the Great who fought a battle on its shores during his India campaign in the early fourth century. Legend has it his favorite war horse, Bucephalus, was injured and drowned in the lake. Locals say the horse can be heard neighing for him on warm summer nights from the depths of its clear, icy waters.

Tajikistan’s blue glacial lakes, known as the pearls or crown jewels, are just one of the elements that make the Fann mountains a nascent destination for both serious climbers and casual trekkers. The hundred snowcapped peaks of the Fann group make up 300 kilometers of the Pamir-Alay mountain system, with Mt. Chimtarga being the tallest at 5,489 meters. Only viable for hiking and climbing from May to October the Fanns are the third highest range in the world.

Iskandar lake resort has been a popular getaway since Soviet times, and Tajiks regularly make the three-hour drive from the capital of Dushanbe, braving the famous five-kilometer-long Anzob tunnel to relax during the summer months.

ABOVE: Camping in the Fann Mountains.

For those with limited time, Haft Kul, or the seven lakes of Marguzor, known among trekkers as the Lake Loop, can be completed in one long day or stretched out over several easy ones. This series of lakes, ranging in color from black to mineral turquoise, occupy a narrow, rocky valley. The lakes were named for their shapes and said to have been formed by the tears of seven sisters who lost their father in battle. In reality these lakes as well as the rest in the Fann range were actually formed by landslides caused by earthquakes and filled with glacial melt from the peaks that surround them.

Along the typical route there are a few established camps but trekkers can easily set up on the shores of any one of the lakes. The route features minimal vertical gain, which mostly follows a dirt road; the Lake Loop is well geared for novice trekkers with minimum gear while still offering postcard worthy views.

For those with more time, experience, and a keener sense of adventure, there are a multitude of treks in the area that combine challenging hikes rewarded with striking vistas and camping spots at remote glacial lakes.

ABOVE: Greenish blue of Kulikalon Lake.

Found 2,880 meters above sea level and a popular camping spot for those diverging from the Lake Loop or beginning a longer trek from Aruch, Kulikalon Lake is a greenish blue lake reflecting the rugged surroundings. Its smooth as glass surface and its ice-cold water soothes those first-day hikers’ sore feet. Visitors are advised to get up at the crack of dawn in order to watch steam roll of the surface of the lake as the sun heats the water’s surface, the perfect backdrop to a hot cup of coffee in the cool morning air.

From Kulikalon many trekkers take either the Alovaddin (or Alaudin) Pass or the less strenuous but longer Laudin Pass to Lake Alovaddin. There is an established base camp where prepared meals and other supplies may be available, but those looking for complete solitude can pick their own spot on the shores of the lake. Sunrise is not to be missed at Alovaddin when the crystal-clear waters light up with a perfect mirror image of the craggy surrounding valley and early morning sky.

From Alovaddin, a day’s trek through and finally above a juniper forest leads to Lake Mutnye, or the muddy lake, which sits at 3,510 meters above sea level. This exception to the striking blue of the rest of the lakes of the Fanns is fed by water that filters through forests, absorbing tannins from vegetation and so creating a tea colored lake which, due to its altitude, can be snowed in even in the warmest months.

There are several hikes leading off from Lake Mutnye, one of the most challenging is to Bolshi Allo over the Chimtarga Pass. At 4,470 meters this is one of the highest accessible elevations in the Fanns reachable without special equipment or skills. Prone to freezing temperatures throughout the hiking season, the pass offers panoramic views of snow crested peaks in all directions. For those with the gear and guts the pass is the place to set up camp in order to summit Mt. Chimtarga, the regions tallest mountain.

Land of the Seven Lakes: Natural Beauty of Tajikistan

The Hidden World of Tajikistan

On any route trekkers are liable to run into locals tending their herds or simply going about their traditional nomadic lifestyle. Tales of their hospitality are becoming legendary along the mountain trails as visitors pass on stories of generous invitations.

“The local people living in the mountains during the summer are incredibly hospitable…along the treks there’s many opportunities to meet them and experience their hospitality – taking tea with them, watching them churn butter or even having a go yourself,” Tim commented on his experience meeting locals in the mountains.

There are several places where local guides and donkeys can be hired in order to take the load off and the guesswork out following remote trails that have a tendency toward being flooded, cut off by freak snow storms or wiped out by earthquakes. Trekkers in the Fanns even report sightings of rare animals like snow leopards and brown bears.