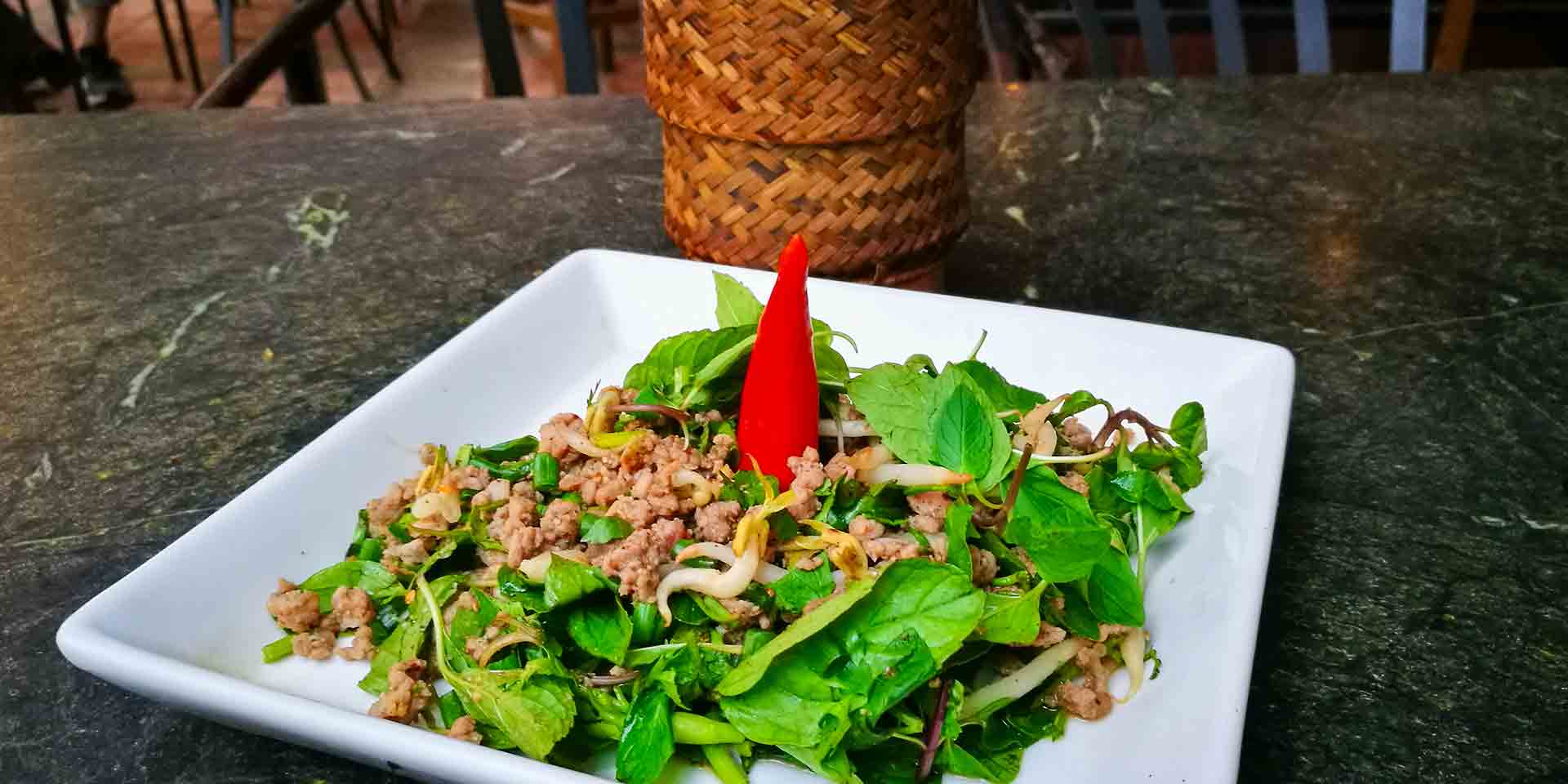 Pretty, landlocked, unassuming Laos often gets overlooked – gastronomically speaking – by its neighboring cuisine queens, Thailand and Vietnam. But, as we will reveal, Laotian food certainly should not be discounted by any taste-chasers out there. Join us on a historic journey of flavors through this unsung hero of food.

A cursory glance at a typically Laotian menu may seem to include many of the delicious delights we often associate with Thailand and interestingly enough, those delectable dishes, so perfectly balanced in flavor and texture, actually have their origins in Laos. Increasingly given its due as a cuisine in its own right, Isaan food from Thailand’s northeastern province bears remarkable similarities to that which you will find just over the border in Laos. This is because at one time, the two regions were part of the same kingdom. Over the years, as Isaan became part of Thailand and the proponents of its recipes continued to move south (there is a sizable Isaan community in Bangkok), their dishes came to be considered part of the Thai culinary canon. But it is those northern neighbors we truly have to thank for the likes of, for example, sticky rice. Laotians refer to themselves as “Luk Khao Niaw”, which means the children of sticky rice, and they eat it for breakfast, lunch and dinner, gleefully using their hands to roll it up and soak up the flavorsome juices of, for example, papaya salad. They call it “Tam mak hong”, but we know it more familiarly as “som tam”, and the mixture of shredded papaya, chili, lime, salt, fish sauce and sugar that you will find in Laos differs only from the more famous Thai version thanks to the addition of “padaek”, a fermented fish paste which lends a more umami flavor.

Also with its origins in Laos is “laab”, that moreish mix of minced, juicy meat or fish marinated in lime juice, fish sauce, mint, chili and fresh herbs and mixed with ground toasted rice for a little added crunch. Then there is “sai oua”, the tasty pork sausage we often associate with Chiang Mai but which was a favorite in Luang Prabang well before. Seasoned with ginger, lemongrass, kaffir lime leaves, shallots, cilantro, garlic, fish sauce and salt, this indulgent little snack is a must-try for any food tourists in Laos.

As you comb the beautiful country for its culinary offerings, other quintessentially Laotian delicacies to be on the lookout for include:
Or Lam:This stew was traditionally made with buffalo meat, which is now more often replaced with beef, simmered in a tasty broth packed with eggplants, beans, black mushrooms and onion and seasoned with basil, lemongrass, chili and cilantro.

Sindad: A taste of traditional Laos-style barbecue is unforgettable. Fat is rubbed on the metal dish which sits over the flame before the meat is applied, for that satisfying sizzle and a perfect, succulent grill.

Khao Pun: A hearty rice noodle soup, this warming dish is made with meat or fish and covered with a spicy and creamy coconut sauce. An extra flavor kick is provided by the addition of fish sauce, ginger, and garlic.

Kaipen: Snack on this paper-thin crispy treat made from green algae. They press it flat and crust it with sesame seeds before leaving it to dry out in the sun. When it is ready to be eaten, it is flash-fried and served up with a spicy chili paste.

While these Laotian favorites all bear similarities with one or other of the country’s geographical neighbors, the culinary path curves away from Asian infusions with the French influence. Along with architectural leftovers, an accent of Laos’ previous occupiers remains in some of its cuisine, not least in the Khao Jee available from Vientiane to Luang Prabang. These traditional French-style crusty baguettes are filled with delicious European goodies, from cheese, tomatoes and pork with ham and pâté and a squirt of chili sauce on top, to more modern combinations like chicken, avocado and bacon.

To sample some of the finest examples from the delicious spectrum of what makes up Laotian food, venture out to try out some of the best restaurants in the country:

In Luang Prabang, Le Tangor has a great reputation for its French-Laos menu and intimate ambience. Spend a leisurely evening grazing on meats and cheeses, accompanied by a glass of fine wine and a soundtrack of jazz; round things off with their indulgent chocolate lava cake. Also combining the colonial with the indigenous is The Balcony by Lanith, where you dine with the rivers and mountains as your backdrop. Here you can enjoy cocktails and dishes from the seasonal menu, prepared with locally-sourced ingredients by a chef with experience in Michelin-starred kitchens. What’s more, the proceeds are invested back into the community. Among the city’s boutique hotels, the Villa Maly offers two dining venues within where you may enjoy their menu of classic Laotian recipes. Relax at Le Vetiver, the elegant restaurant, or set off on a sunset cruise down the Mekong, stopping off to enjoy traditional music and dance performances. While you find yourself exploring the delectable delights of Luang Prabang, we recommend you treat yourself to a stay at gorgeous Amantaka. Set in a former French hospital on the banks of the Mekong near the night market, this stunning hotel combines old-world charm with world-class service.

Just outside Vang Vieng, meanwhile, on the Nam Song River, a restaurant, bar and garden are combined at Vang Vieng Organic Farm. Try traditional Laotian fare, from vegetable soup to sticky rice and dip, made with ingredients grown on site. Make sure to leave room for an indulgent tapioca dessert and an authentic Laos-style coffee.

Alternatively, experience true local culinary life beyond the cultivations of the cities. In the northern village of Luang Namtha, situated on the Tha River, enjoy the chance to savor a home-cooked meal prepared in the authentic local style with organic, local produce, surrounded by the gorgeous mountain scenery and welcomed with hill tribe hospitality.