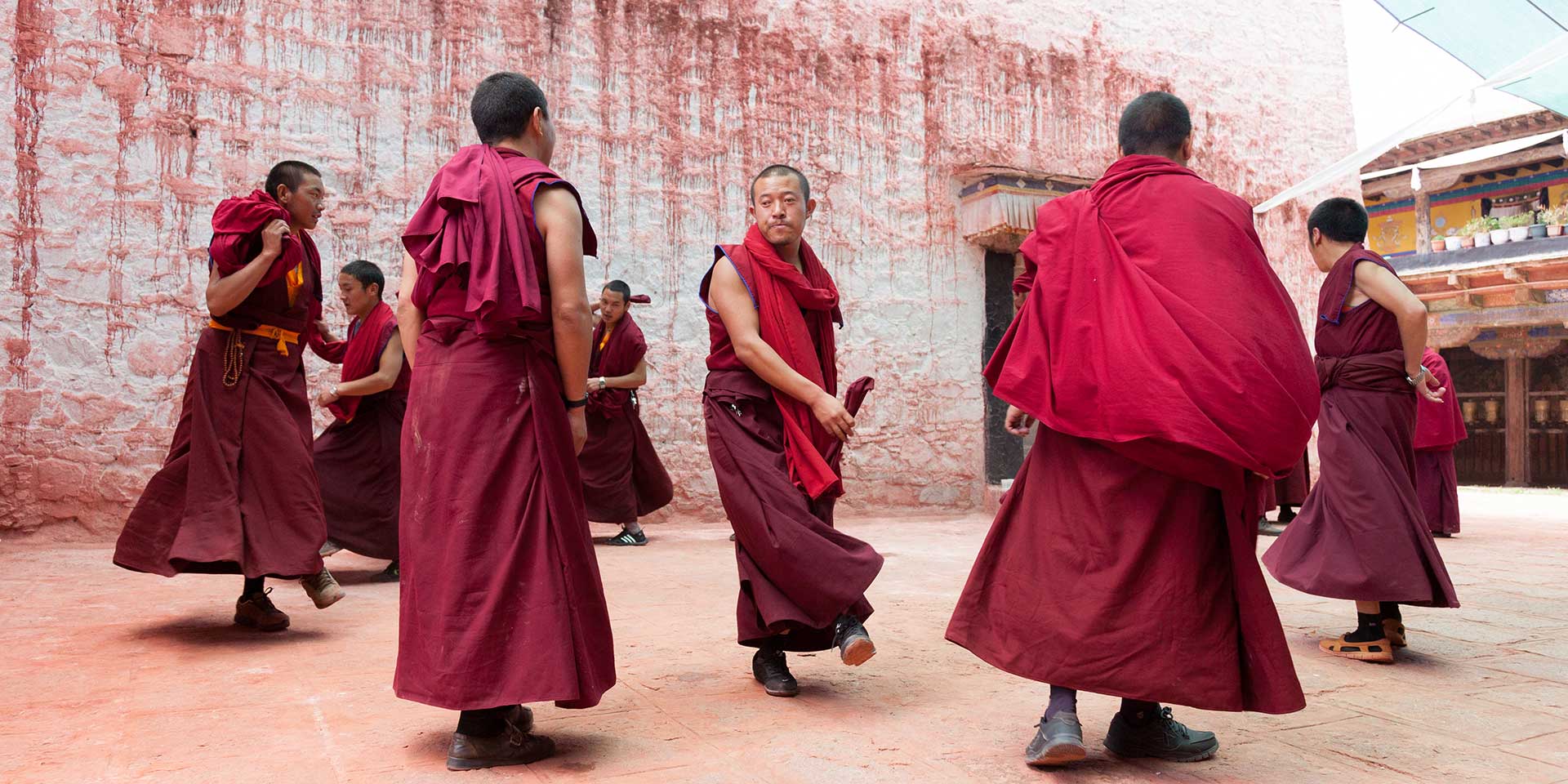 I stepped onto the tarmac at Lhasa Gonggar Airport and breathed deeply. I was now in one of the highest-placed cities on earth, at 11,975 feet above sea level, and I knew that the altitude would be an adjustment. However I wasn’t staying long – I hopped in a car and headed straight for Tsetang. The drive was approximately three hours (115 miles) southwest, and as I looked out the car window, I noticed the terrain take on a dramatic transformation, with the appearance of large sand dunes that looked to me to be straight out of Mongolia, rather than Tibet. Tsetang is positioned at a slightly lower altitude than Lhasa, at 11,811 feet, so it makes a good stop for a first night in Tibet.

Tsetang is one of Tibet’s largest cities, with a population of 52,000 people, and as the seat of Tibet’s ancient emperors, contains significant historical importance. It is also known as the cradle of Tibetan civilization, and is home to many ancient ruins. Flanked by Mt Gongbori, in the Yarlung Valley, with colorful prayer flags strewn about, the area is beautiful.

Along the way, we stopped at a tiny village, where we visited the Tibetan Village Project, a small NGO that Remote Lands supports. The project’s mission is to promote sustainable development, including education and entrepreneurship, while preserving Tibet’s cultural heritage. We visited a doctor who was providing basic services to locals. The facility was simple and stark, but the doctor made the most of what he had. It was an eye-opening experience for me. I had the fortune to meet a friendly Tibetan elder who possessed no more than four teeth, and her nearly toothless grin was one of the best I would encounter in the country.

We returned to the car and continued onwards through the spectacular scenery, towards what would be our most important stop of the day: Tsetang’s Yunbulakang Palace. The palace, perched atop a rocky cliff, overlooking the verdant valley below, boasts a commanding view of the exquisite natural surroundings. According to legend, Yungulakang Palace was the first in Tibet, built in the second century B.C. Enshrined inside are the statues of Buddhas and kings, and the ancient structure is considered extremely holy. It’s necessary to climb a steep set of stairs to reach the palace’s entranceway – a task which wouldn’t normally be a problem, but with the breathlessness that the altitude brings, the endeavor was indeed  a challenge. I trudged along, and once at the top, having caught my breath, I realized that though the castle’s interior was quite small and rather unimpressive, the sweeping views of the lush valley and surrounding mountains made the difficult journey well worth the effort.

It was starting to get late, as the sun began to slink behind the mountains, so we headed to our hotel during the last glimmers of daylight. We were booked in at the Tsetang Hotel, which I found to be very basic, yet clean and comfortable. Once settled in, we sat down to dinner in the Chinese restaurant and had a good laugh at the menu, which boasted platters of “Strange Flavored Chicken,”  “The Pizzle in Pickled Pepper”, “Saluted Rape”  and “Fish-Flavored Sliced Pork.”   When we’d finished eating, I noticed that the altitude was really starting to have its effects on me, so I decided to call it a night.

I woke early the next morning and breathed deeply, inhaling the fresh Tibetan mountain air before downing a quick breakfast and checking out of the hotel. First on the itinerary today would be Samye Monastery, the first of its kind in Tibet. This ancient monastery, 19 miles from Tsetang in Dranang, Shannan Prefecture, was built by a king who sought to revitalize Buddhism, around 775 C.E. (A.D.). Clearly, his aims were realized, as Tibet is now widely Buddhist.

Though it’s possible to drive right up to the monastery, we chose to climb a long set of stairs up a nearby mountain, which allowed us incredible views along the way. Like the stair climb at Yunbulakang Palace, this was worth the effort. We strode down the other side, passing through a neighboring village, and meeting friendly, smiling locals along the way.

Eventually, we reached the monastery. My first impression was that it was quite elaborate and interesting. The outside area was ringed with prayer wheels. Inside were dozens of beautiful Buddha statues and other figures. The construction of the monastery was intended to replicate the universe exactly as described in the sutras. The walls were painted with vivid murals, and there were plenty of other ancient relics dotted around the interior. Locals had congregated to pray near the statues, likely a part of their daily routine. I didn’t see a single other tourist. Most interesting to me was the group of monks outside the monastery who were practising a dance.

I snapped photos as I observed them. Other monks were gathered around in the courtyard reading Buddhist scriptures. Finally, it was time to leave Tsetang and make the three-hour drive back to Lhasa, where I would stay two nights and then head out to Gyantse.