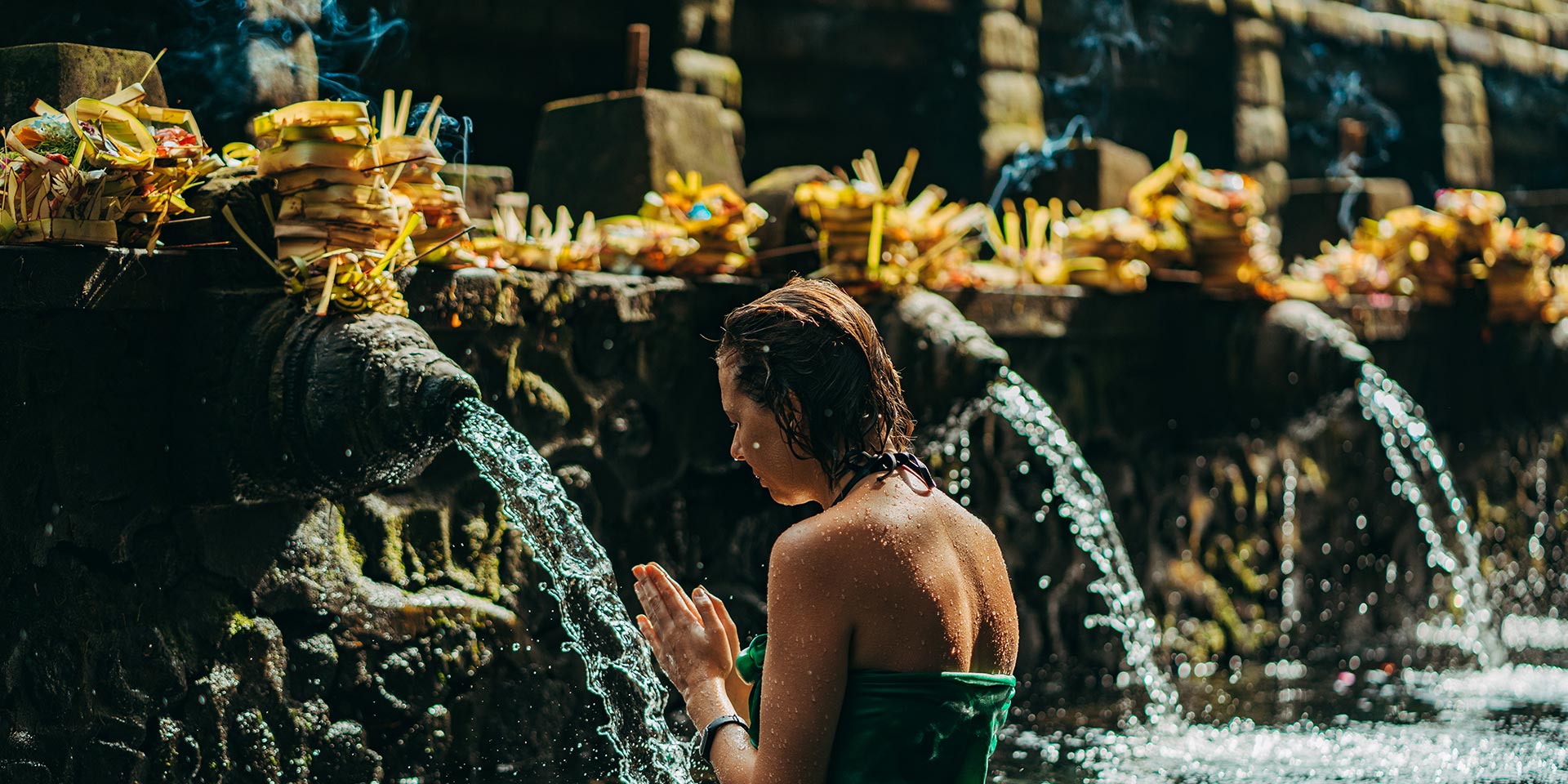 Bali is one of the last pockets of Hinduism in Muslim-dominated Indonesia. Bali puras, or temples, are distinctive architectural gems often found in locations by the sea or high in the mountains. The photogenic nature of these unique wonders has made them a must-see for travelers to the island, but with such a large area and such a diverse array of temples, travelers would be hard pressed to visit all in just one visit. However, for the architecture addict with a spiritual side, there is a trail that goes from north to south that hits the best of Balinese heritage.

The iconic temple by the lake, Ulun Danu Beratan, is found on the western shore of Lake Bratan in the northern town Bedugul, a great place to start an island-spanning temple journey. It is a water temple dedicated to Hinduism and Dewi Danu, the river goddess. Built in the 17th century, the structure is centered around the three towers in the middle.

The main tower is eleven storeys, representing the holy mountain in Hinduism, Meru, and dedicated to the god Vishnu. The other two, with seven and three storeys, are dedicated to Brahma and Shiva. The towers are located on an elevated island separated from the main grounds; the lake engulfs it when the water level is high. The best time to visit is during sunrise, when keen photographers can rent a boat to paddle on the lake.

ABOVE: Devotees purify at Tirta Empul, also known as the “Holy Water Temple”.

Also known as the “Holy Water Temple”, Tirta Empul, southwest of Ulun Danu Beratan Temple, was founded in the 10th century under the Warmadewa Dynasty and dedicated to the Hindu god Vishnu. The word Tirta Empul in Balinese means Holy Water Spring, hence the nickname.

ABOVE: In the pool at Tirta Empul.

The back courtyard houses the main temple, where musicians can be found playing and devotees sit and pray. The drive may not seem that far from Ulun Danu Beratan Temple, but the circumlocutory Bali roads will take about and hour and a half. As an important temple, sarongs must be worn regardless of the length of the outfit and can be rented for free at the entrance.

A funeral temple built in the 11th century near Tirta Empul, Gunung Kawi is thought to have been built by the Udayana Dynasty King Anak Wungsu to commemorate his parents, King Udayana of Bali and Queen Mahendradatta of Java. Very close to Tirta Empul temple, the complex is hidden behind the slopes of rice paddies along the river Pakerisan, and visitors must sprinkle themselves with holy water by the entrance to enter.

Gunung Kawi is most distinguished by the ‘Candi’ rock carving to the right of the entrance. Ten carvings of 7-meter-high shrines with a hidden chamber at the base where offerings are placed. Across the river are temples dedicated to the King, the Queen, and their three offspring, as well as two small pools that resemble the holy springs at Tirta Empul. Given its position by the river, there are also numerous small waterfalls dotted around the temple.

ABOVE: Tanah Lot is one of the seven sea temples.

The famous temple on a rock and heading toward a more urban Bali, Tanah Lot is a sea temple dedicated to the sea god Bhatara Segara and is thought to have been built after Hindu Holy man Danghyang Nirartha spent a night there. One of the smallest temples on the list, Tanah Lot is one of the seven sea temples that dot the southwest coast of Bali, each within sight of the other.

While the temple is accessible during low tide, it is not open for tourists to visit. In fact, about one third of the temple is artificial rock, carefully restored in the 80s by a project sponsored by the Japanese government. It is a popular spot for sunset, though its popularity means there are hundreds of people at the spot at any given time trying to get that perfect instagram snap.

Rice Paddies and Culture in Bali

Singapore to Yogyakarta in Style

At the southern tip of Bali and to round out the journey after sunset, Uluwatu temple is famous for the monkeys that populate the area and the panoramic vista of the sea. Built on a 70-meter-high cliff, the temple and the area’s name derive from it, with Ulu meaning ‘edge’, and watu ‘cliff’.

Dedicated to the a manifestation of the Hindu Roaring God Rudra, the current structure was built and expanded by a Majapahit monk before being developed by a Javanese Sage. However, some also say that the Hindu Holy man Danghyang Nirartha was the architect. It is one of the seven sea temples on the coast.

In addition, there is a Kecak Dance performance, a local Balinese dance preformed chiefly by male, every day at 6pm. Do be careful of the monkeys, who are known to snatch items from tourists.

Even though Bali seems like a small island, you’ll need to factor in more than four hours of driving if you want to hit all five in one day.