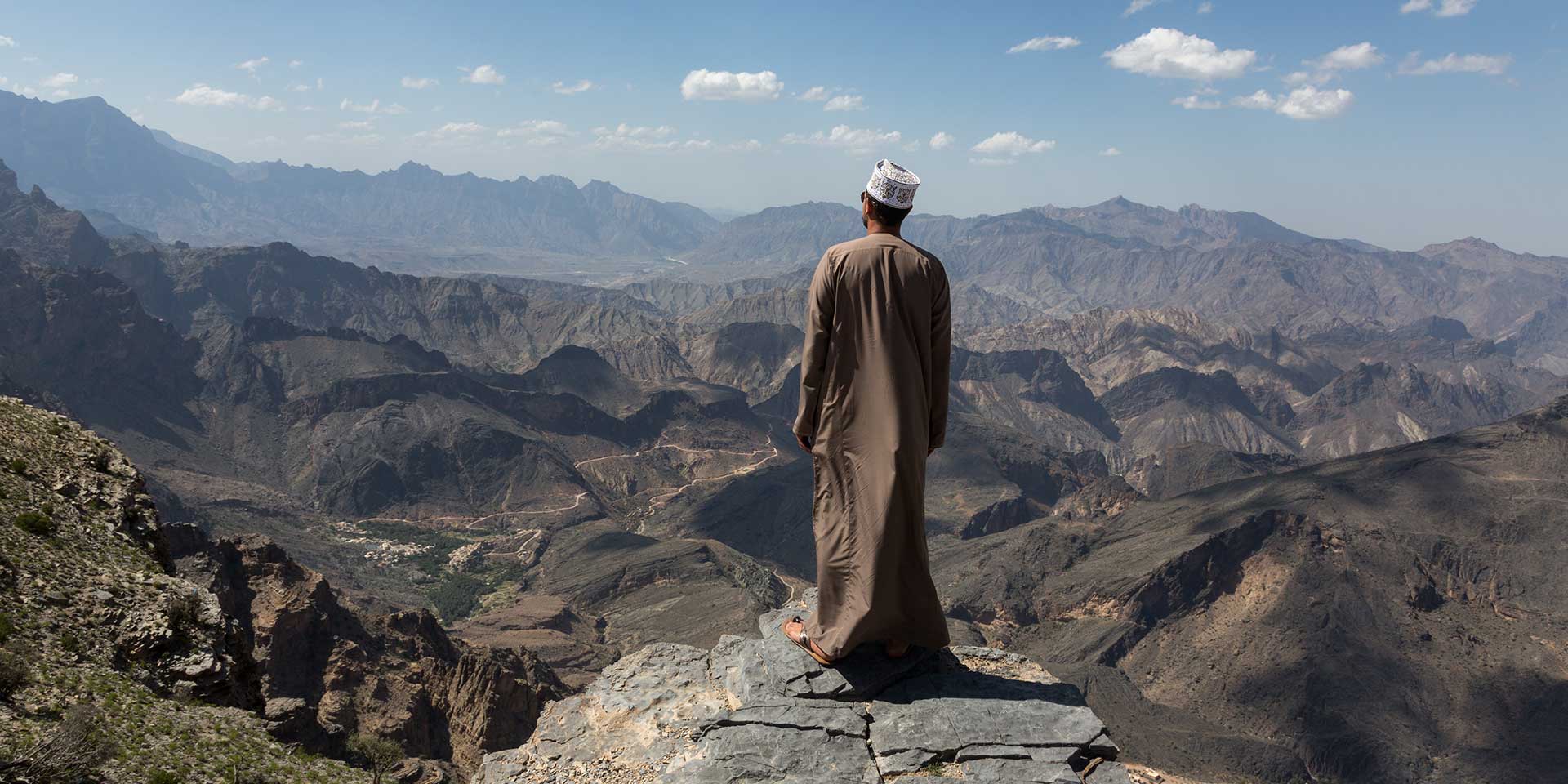 As the sunrise woke me, through the window of my room at the Shangri-La Al Husn Hotel, I got my first glimpse of Oman. The contrasting view of the beach below and the rocky Al Hajar mountains beyond was a fitting introduction to a journey that would take me all over the diverse terrains of this fascinating country.

Having arrived in darkness at 2.30am, I had seen little of Muscat, but now I was ready to explore the quaint seaside capital. Accompanied by Mohammed, a laid-back Omani youth who was to act as my driver and guide, I was excited to see the country through the eyes of a true local and he was keen to show me. Greeting me with a smile, and the warm welcome characteristic of his countrymen, he suggested we start with the vast Grand Mosque of Sultan Qaboos. Timing is key when visiting this iconic Omani landmark and, thanks to Mohammed’s insider knowledge, ours was perfect. We shared the passages and prayer halls, of a building that can accommodate up to 20,000 worshippers, with only a few others. The architects of the Grand Mosque were also responsible for the world-famous Royal Opera House, with its elegant marble exterior. Even if, like me, you are not stopping for a performance here, it’s worth taking a look around this beautiful building to witness its elaborate Arabesque design.

To get my bearings and take in a little history, Mohammed showed me around the small but fascinating Bait Al Zubair museum, before we made our way to the fish market and colorful Muttrah Souq. It was here that I got my first taste of authentic Omani life, among the vendors selling everything from frankincense to jewelry and spices. I had expected Oman to share similarities with the UAE and other neighboring Gulf states, but I felt a distinction right away. Muscat boasts a trading history extending back to the first century, and influences that extend from India to Zanzibar; subsequently it is home to an eclectic ethnic mix of Arabs, Africans and Indians, as well as Omanis – many of whom are of mixed descent and speak Swahili and Balochi. Besides the people, I was struck by the lack of flashy skyscrapers, roaring supercars and opulent shopping malls you find in Dubai or Abu Dhabi, and in turn, the lack of tourists. There was a distinct sense that in Oman the emphasis is less on wealth and more on humility and a simple lifestyle.

The next morning, Mohammed and I headed out of Muscat and into the mountains in our 4×4. To say we ‘hit’ the road would be inaccurate – most of the action being off-road as we plunged into the valley of Wadi Bani Auf. Thanks to its mountainous terrain, Oman is riven with wadis (valleys), which become temporary rivers after heavy rains. In fact, Mohammed told me in his characteristically-casual way that the flash floods caused by heavy storms often sweep people and cars away. Fortunately, we didn’t need to worry about adverse weather and I was free to focus on the stunning views from our jeep. Mohammed, as it turned out, was really into cars and negotiated the rugged countryside terrain like a pro, the craggy mountains soaring up either side of us and despite the bumps, the six-hour-wild ride flew by thanks to the truly spectacular scenery. After stopping for a picnic lunch at a small oasis, we wound our way up the mountain roads to a viewpoint high above the valley. The sight of Mohammed, dressed in his traditional dishdasha; standing with the sprawling landscape extending out at his feet, was almost biblical. This was the real Oman. Suitably impressed by my first glimpse of the scenery, we went to meet the people from the local area. In the 400-year-old town of Al Hamra, Mohammed introduced me to the friendly locals who welcomed us into their amazingly-preserved traditional homes, built from mud and straw. We shared coffee and dates and exchanged stories as lentils were heated and flour ground with simple hand-operated tools. The lady of the house prepared what is best described as a culinary relative of a crispy pancake – a simple meal, but one served with genuine warmth.

The long day of driving and taking in so much had left us tired, and I was relieved to check in to The View hotel, perched high on a hill overlooking Al Hamra and the farms from which our dates had come.

Setting off early, we drove to the village of Jabreen and its 17th-century castle, one of the finest in the country. Supervised by Sultan Al Yaribi, whose tomb lies within the complex, it was built as a formidable bastion during wartime, as well as a center for education and learning. Besides its sheer size, I was especially captivated by the beautifully-painted ceilings, frescoes and wood carvings within.

The mountain road took us onwards through Birkat Al Mauz and upwards for more than 20 miles into the peaks of the Jebel Al Akhdar mountains, to an elevation 6,500 feet above sea level, and we felt it – the temperature dropped nearly 20 degrees as we headed into the clouds. Emerging, we were struck by an unexpected sight: in that rocky, mountainous landscape covering the valley below, were lush green rice terraces. Perhaps not that unexpected, Mohammed told me we had reached the area known as the “Green Mountains”.

We arrived at the Alila Jabal Akhdar resort late in the afternoon, and the hotel’s location was nothing short of spectacular. Perched on the edge of an enormous canyon, each of the rooms affords amazing views over the dramatic gorge falling away from the Al Hajar mountains. The hotel itself is equally impressive; built from local stone in the style of ancient Omani forts, it features solid wooden doors and is decorated with local touches like handmade local pottery and copper. The excellent food is inspired by Arab and Mediterranean flavors and the rooms are luxuriously appointed; all to a standard you might not expect from such a remote resort. The real star, though, is the aforementioned view. The Alila is the sort of place you can just sit and stare in awe at the scenery — and that’s exactly what I did as the sun set.

It was with great reluctance that I checked out of the Alila at 6am – having chalked it up among my favorite hotels in the world – but we were bound for one of the oldest cities in Oman. Nizwa was the capital during the 6th and 7th centuries and I was keen to get another taste of local life. It was Friday, which is market day at Nizwa Souk.

Cattle were paraded around a circular track as buyers looked on, yelling and haggling when something took their fancy. My favorite section though, was the small but bustling gun market. The experience of looking on and taking pictures, as the locals tested and bargained for the vast array of rifles, took people-watching to a whole new level. Mohammed told me that this is how business has been carried out here for hundreds of years and I found myself captivated by the first-hand experience of such an age-old tradition.  After a stop at the date market and Nizwa Fort, we ventured into the desert.

As we left civilization behind, the road became increasingly empty, populated only by the odd herd of camels. The terrain turned to scrub and then, at last, we were amid rolling, sprawling desert as far as the eye could see. Named after the local bedouin tribe, Wahiba Sands – also known as the Sharqiya Sands – is an awe-inspiring sight. As we rolled through the arid landscape, Mohammed eyed the horizon appraisingly and suggested that we do some dune bashing sooner rather than later. With the skies darkening ominously above, he revved the engine and attacked the vast, sweeping slopes. As he handled the 4×4 like a master, I filmed the action, often getting out and running down the dunes in order to catch Mohammed racing over the sandy mounds. The sand cascaded in waves over the windshield as we slid, slithered and climbed, and all the while the black clouds sunk lower. Deciding not to risk it any longer, Mohammed called time after an hour or so, and we abandoned our adventure in order to race the approaching sandstorm to Desert Nights Camp, arriving just in the nick of time. Moments after we pulled in, the heavens opened and the torrential rains and strong winds kept up for several hours, often cutting out the electricity.

With no choice but to confine myself to my tent, thanks to the raging weather, I spent a comfortable night and woke early to find that the storm had passed. I wandered out into the desert on foot to take a look around. Beyond the camp, where a few guests were buzzing around on ATVs, I found a small group of camels grazing nearby. The only person in sight, I spent a very enjoyable hour or so just hanging out with these incredible creatures in peace; it was a moment of calm after the storm.

Later that day, I made friends with yet more locals in a nearby Bedouin village, where I was invited in for another round of coffee and dates. Bedouin people are – according to Mohammed – hospitable by nature. It is deeply ingrained in their culture to provide food and shelter to any stranger passing by, under any circumstances…whether the visitor wants it or not!

Back on the road, we drove through the shallow waters of Wadi Bani Khalid at high speed, and took in the scenery of the valley, with views of quaint little villages embedded in the mountainsides. We stopped for a hike in the foothills, climbing over rocks and up cliff faces to find spots to jump off and into the clear blue waters below.

Our destination was Sur, a historic city formerly under Portuguese rule, which was established as a trading center with East Africa. The European influence in the market and the architecture, plus the sweeping corniches cut into the mountainside, gave this pleasant little seaside town a completely different feel to the other places I had visited in Oman. We visited one of the few remaining traditional dhow factories, and though the traditional wooden boats are slowly disappearing in favor of more modern vessels, there were plenty still floating in the harbor.

After watching a stunning sunset over the city and its iconic Ayjah Lighthouse, we drove an hour out of town to the Ras Al Junz Turtle Reserve. I was a bit skeptical of what I feared might be a tourist trap, especially as I joined a group of more than 30 people to walk down the beach. All my reservations disappeared, however, as I watched several enormous green turtles lay their eggs on the beach and bury them in the sand; a fittingly poignant note on which to finish my journey in Oman – one of surprising discoveries and hidden gems.

I was immediately won over by the rugged and beautiful scenery, but it was the chance to spend time with the country’s singularly friendly people and get a sense of their down-to-earth lifestyles that has really stayed with me. Oman is a unique destination, perfect for epic road (or off-road!) trips and, without another American in sight, it was a great escape for me. It’s also extremely safe and there’s the added bonus of the genuinely excellent hotels too; I would thoroughly recommend a visit.