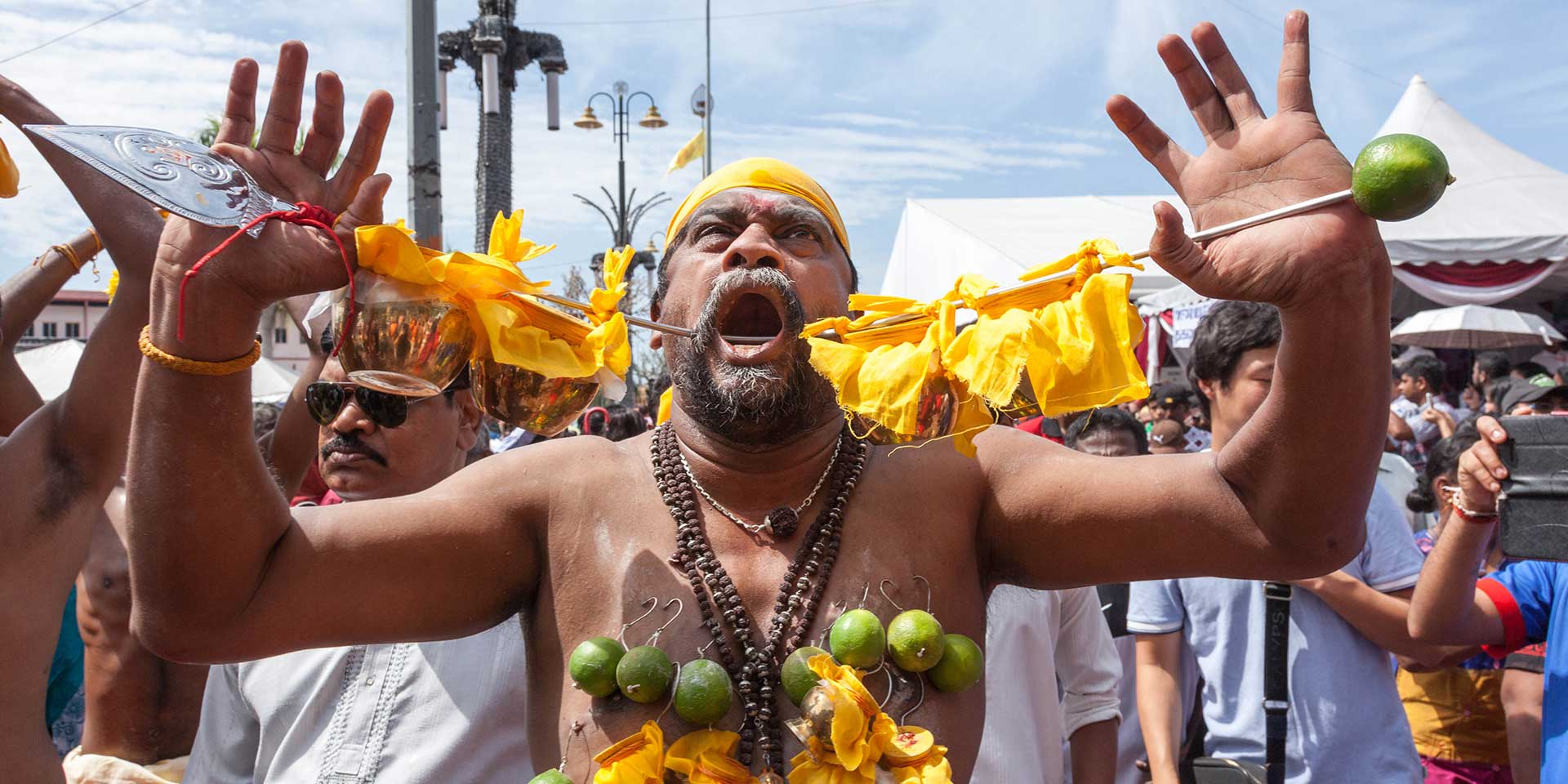 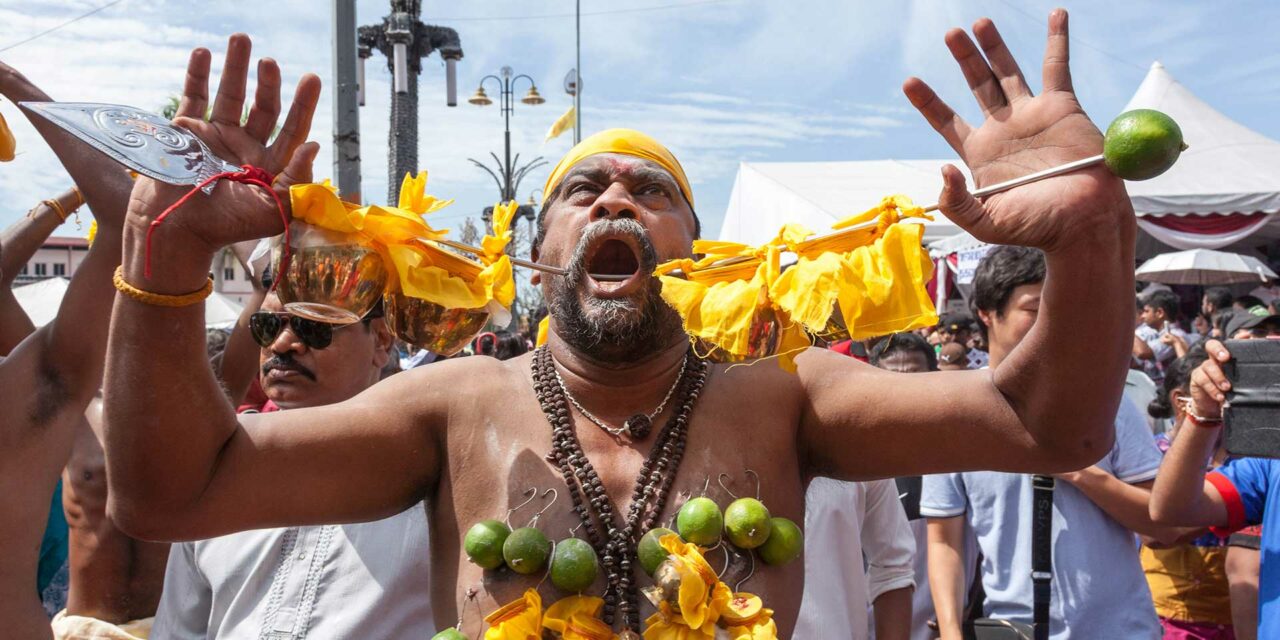 When the Pusam star climbs to its highest point in the sky, during the Tamil calendar month of Thai (usually January or February), Hindus around the world celebrate their most spectacular festival. Recently, I was lucky enough to have the opportunity to witness the festival in full swing, at one of the world’s most revered Hindu shrines outside of India: the Batu Caves.

The iconic Batu Caves appear discreetly from within the walls of a limestone mountain. Three main caves exist in total, with several smaller ones dotted around them. A daunting 272 steps lead to their dark entrances, at the bottom of which families of monkeys can be found clinging to limestone outcrops, waiting to be fed (or steal) bananas and other such fruit brought by visitors and pilgrims. Given the site’s importance to Hindus, it’s no surprise that nearly two million people attend the Thaipusam festival at the Batu Caves each year. The festival does occur in other Hindu areas with large Tamil communities, such as Penang, Singapore, and Mauritius, but at the Batu Caves it is truly spectacular.

ABOVE: Thousands of devotees make their way up to the Batu Caves.

Thaipusam commemorates the victory of Hindu god Lord Murugan over demon Tarakusaran with a spear, thus ridding the people from evil. The festival takes place over two days – including an eight-mile procession from Central Kuala Lumpur to the Batu Caves – with many devotees beginning two days before that, with fasting and prayers.

ABOVE: This woman is in a state of trance after having her face pierced with a spear.

I’ve revelled at the idea of attending a Thaipusam festival for over 20 years, since I first heard of this glorious, raucous, devotion-fueled procession. While I have had the chance to visit KL often, this year was my first opportunity to do so during the festivities. I flew in from Bangkok on a 7am flight, and headed straight from the airport to catch up with the procession. Stepping out of my car into the heaving crowd of entranced worshippers was a massive shock to my senses. Thousands upon thousands of pierced worshippers were shaking and screaming their way past in an otherworldly kind of parade. Live percussionists banged their drums, while the shrill voices of singers pierced the heavy air, thick with heat, sweat, and humidity. I didn’t waste a moment. I dove straight into the crowd, camera in hand, sending a silent prayer up to one of the many Hindu gods presiding over the procession to spare my camera. Seconds later, a woman with wide, glazed-over eyes screamed and lunged at me, nearly knocking me to my feet. I smiled as I steadied myself, throngs of devotees crashing into me on either side in never-ending waves – I was totally into this!

ABOVE: Hijars – the Hindi term for the ‘third sex’

Devotees were young and old, male and female (and even Hijars – the Hindi term for the ‘third sex’). A woman rushed past balancing a pot of milk atop her head, which she would later offer to Lord Murugan. Troupes of percussionists marched by as they beat hypnotic rhythms onto the drums strung around their necks. Men labored along, weighed down by 60lb-Kavadis balanced on their shoulders. Kavadis are physical burdens through which devotees can show their devotion to – and ask for help from – Lord Murugan. They consist of two semicircular pieces of wood or steel that have been bent and attached to a shoulder-born structure and strewn with flowers, features, and the like. I noticed another woman carrying a pot of flames, her eyes wide open in a deep state of trance. Beside her was a man decked out in an elaborate peacock feather costume performing a dance. Of course the most striking and captivating of all the devotees were the ones covered in piercings that held limes, apples, bananas, and vessels of holy milk, many with spears protruding through their cheeks and tongues. No matter what their “burden”, nearly everyone was friendly, and happy to pose for photographs – or simply too entranced to care.

ABOVE: An entranced man cries out..

Once I’d had enough of the processions, I headed to the entrance of the Batu Caves, but with thousands of people doing the same, it was a long and painful wait under the hot Malaysian sun. It was here that exhaustion set in for me, as I braved my way through the thick crowds and air up the 272 steps towards the mouth of the cave. I was tempted to turn back several times, even before reaching the stairs, but a simple glance behind me would serve as a helpful reminder that it would likely be even more challenging to do so. Luckily, my second wind hit me in the wake of some strong fans blowing out cooling vaporized water.

ABOVE: Devotees take a rest inside the Batu Caves after receiving their blessings.

An hour later, I found myself at the top of the stairs, the dark interior of the cave directly in front of me. Though this is the ultimate highlight for the devotees to complete their act of devotion, it was somewhat anti-climactic for me. It was a case of the journey being more significant than the destination. Still, I used this time to catch my breath in the fresh(er) air and shade of the cave, before turning around and plodding down the flight of stairs, which bore the weight of just as many people as they had on the way up.

ABOVE: A woman having her head shaved as an offering for Lord Muruga.

On my way to Sungei Batu River, where devotees bathe and prepare themselves for the procession to the cave, I stopped to visit an area where men and women alike were having their heads shaved as further offerings to fulfill their vows. It was fascinating to see women making such a sacrifice of their ultimate form of femininity (hair is a very important symbol of femininity in Malaysia, as in many cultures) to complete their act of devotion. Upon my arrival at Sungei Batu River, I walked into a chaotic scene of loud live music, piercing rituals, and families standing in their masses watching the whole thing.

ABOVE: This woman was screaming in an entranced state as a priest pierced her cheeks.

Screams broke through the loud buzz of the crowd – not from pain but rather something that rises in the chest when one is in a trance. I stepped in closer to watch the multiple piercings being performed, and marvelled at how little blood was being produced. Most devotees didn’t even flinch as the needle passed through their cheeks, tongues, and other sensitive bits of skin. I even had the chance to watch a man arrive unpierced, tell the priest (who performed the sacred piercings) what he wanted – almost as if he were placing an order for a sandwich at a deli (“I’ll have some limes here, a few bananas under here, a few apples back there…”). The priest followed his orders, blowing smoke in the man’s face as the process neared completion, after which he wiped ashes across his face. At this point, the devotee went visibly into a trance, eyes bulging as if they were trying to escape from his head,  and body shaking. He was ready. Off he went into the crowds, and I followed him with my eyes. It was truly an experience to witness!

Despite the fact that I spent much of the day in discomfort – either from being pushed, banged, lunged at, or otherwise by the massive crowds of pilgrims, or from the blazing hot sun and long waits – I think it is likely that I will return to witness this festival at the Batu Caves once again in the future. That being said, I learned from this experience that I would much prefer to attend from the middle of the night to the early morning – as the sun gets higher in the sky, it gets far too hot! It was easily one of the most challenging photography sessions of my life, but also one of the most rewarding!