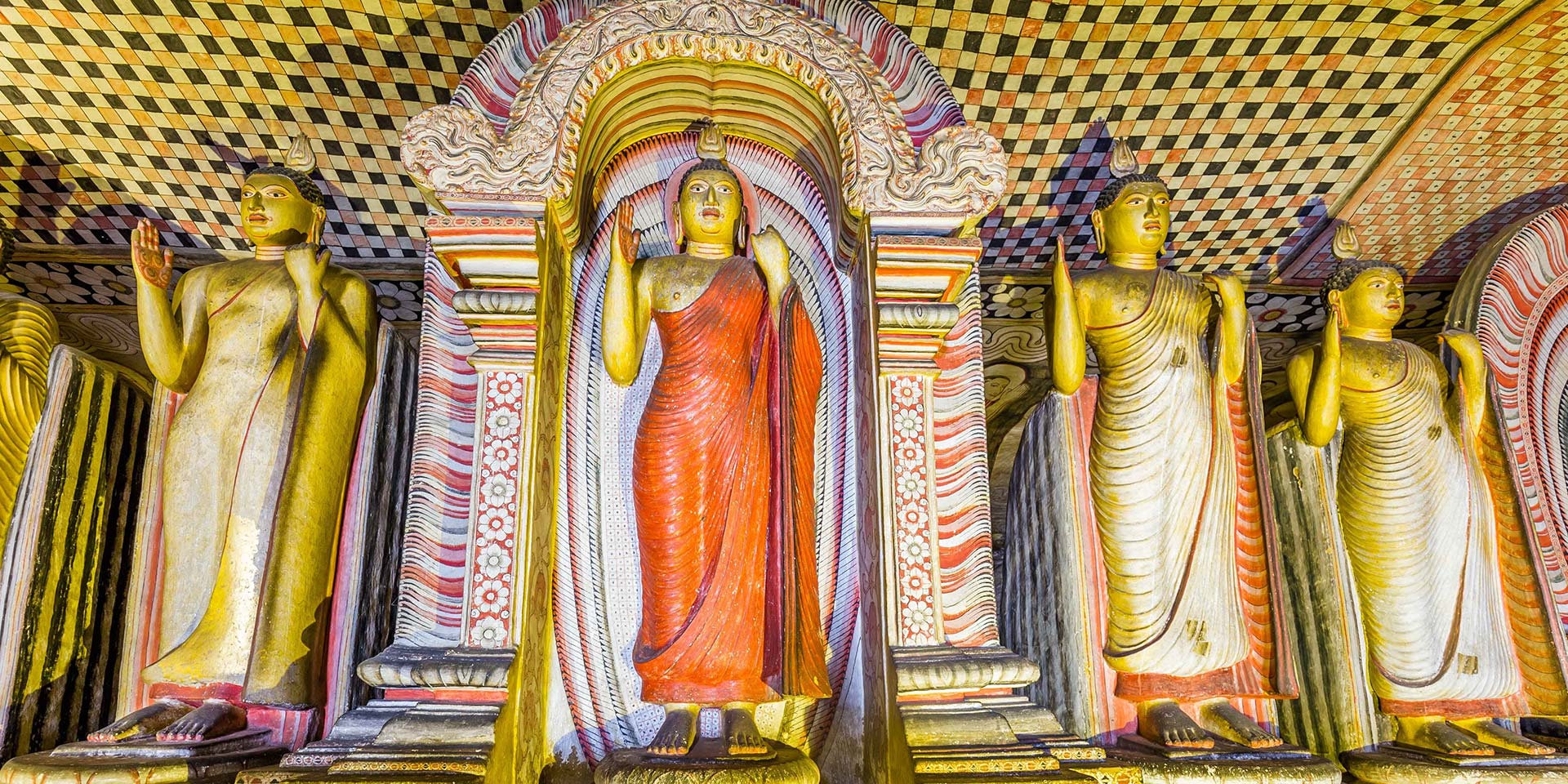 According to the Mahavamsa, one of the traditional chronicles of early Sri Lankan history, King Asoka of India sent his son and daughter to Sri Lanka to establish Buddhism on the island during the first century B.C.   It is also claimed that Buddha visited Sri Lanka three times, even leaving his footprint on Adam’s Peak – which is today an important pilgrimage site.  And thus, while only 35 miles off the coast of India, and also highly influenced by trade with the neighbouring Middle East, Sri Lanka and its dominating Sinhalese culture has embraced Buddhism for centuries.

In the heart of the country lies Sri Lanka’s famed Cultural Triangle.  This area extends north from Kandy and includes the ancient capitals of Anuradhapura and Polonnaruwa, the cave temples at Dambulla and the mighty rock fortress of Sigiriya.  If you are interested in either history or Buddhism, it is well worth basing yourself here for at least two to three nights to explore the area – I made my home at the stunning Bawa-designed Heritance Kandalama.

My journey started with almost a full day at Polonnaruwa, the 2nd oldest kingdom in Sri Lankan history, dating back to the 11th century.  Very reminiscent of Sukhothai in Thailand, the ruins of Polonnaruwa, a UNESCO World Heritage Site, are spread out over a large area dotted with decaying city walls intricately carved with elephants, lions and human figures.

The Vatadage, one of the most preserved buildings, is a circular structure that has four exquisite Buddha statues symmetrically placed around the inner courtyard.  To enter the space, you need to take off your shoes – which is a challenge in the sweltering heat as you negotiate the burning hot stone floors looking for shade (note: bring socks!)

Surrounding the Vatadage is an area with the most buildings, and you can easily spend an hour here looking through stone doorways, wandering corridors and weaving in and out of the ancient pillared structures.

The most extraordinary site at Polonnaruwa is the Gal Vihara, an amazing collection of large carved Buddha figures.  The first carved statue is a seated Buddha in meditation on a lotus.  Behind the statue is a carving of vimana with four smaller Buddhas.  Next is a smaller statue of Buddha, about 15 feet high, carved in to the rock.   It is believed that this carving represent Buddha’s visit to heaven called Thusitha to preach to his mother.  It is also said that this statue was originally covered in solid gold and that over time treasure hunters burned logs on the statue and melted down the gold.  Third is a 23-foot standing statue of Buddha, carved from the rock.   Lastly is a massive 80-foot statue of Buddha passing away – the ear falling along the body and one foot slightly behind the other are signs that this is not Lord Buddha resting, but at his death.

My next stop on the heritage trail was the Cave temple at Dambulla, another UNESCO World Heritage site.  As you arrive, you are greeted by a shiny gaudy new golden Buddha and plastic monks that decorate the base of the hill.  Don’t be put off –  what awaits is worth the initial horrors of the modern neon additions. A steep climb of what felt like 500 steps in the extreme heat takes about 15 minutes.  At the top, you are greeted by hundreds of cheeky long-tailed macaques and the ubiquitous shoe minder, whom you can promptly ignore and place your shoes in your bag before heading into the caves.   Be prepared for another fire stone dance, as you leap across the red hot stones until you reach the shaded corridors of the caves.  (Note – make sure you wear shorts or a skirt that falls below your knees, as there is an official to check for modesty before entering the caves.)

There are five caves at the site, two of which were store rooms until 100 or so years ago and which have now been converted to resemble the three original caves. Each cave roof is painted with tiny images that flow over and around the rock surface making the roof look like it is covered in a tapestry.  They are all filled to the brim with several hundred statues of Buddha, with the occasional king thrown in for good measure.    The location is what makes them so astounding in my mind – five caves in the side of a large granite outcrop 150m above the ground. The steep climb to reach the temple caves certainly makes you appreciate them more.

My next stop along the Cultural Trail was Sigiriya – my nemesis and personal Everest for the Sri Lankan journey.  Dominating the vast flat jungle landscape, Lion’s Rock comes within view miles before you reach it – reminding you that it is one very long climb to the top – a vertical 200 metres.  My guide reassured me along the drive, reminding me that there would be no shame in taking in the view from the extensive gardens below and not even attempting the climb.

Sigiriya, which for centuries was inhabited by monks, was adopted by King Kassapa as a sheltered capital in the late 470’s.  This young son of a consort conspired to assassinate his father the King, and dispossessed his brother, the true heir, who went into hiding in India.  Forever in fear of his life, Sigiriya became an inpregnable fortress on top of this magma mountain…which worked until 495 when his brother overran the capital and King Kassapa was killed.

Undaunted by the task before me, or maybe too proud, I set off on the long slog up the 1200 plus steps to the top.  The walk begins with a series of carved stone steps – and fortunately there are plenty of places to stop to catch your breath or rest in some shade.  About half way you come upon a spiral precarious metal stair case that leads to some mesmerizing cave paintings known as the Maidens of the Clouds.  After making it around the Mirror Walls – with ancient graffiti carved into the sheer face of the mountain – you come upon the Lion Staircase where there was once a full lion carved out of rock, but now only his impressive paws remain, marking the starting point of the last climb to the summit.

The staircase, rickety and rusty and narrow, leaves much to be desired.  There are no places to stop to catch your breath, so once you commit, there is no turning back. I could pretend that my quickened breathing and racing pulse by the time I reached the top were solely because of the physical workout, but it was much more the result of plain old fear.

But now at the top…wow.  The stunning views of the surrounding plains and hills was endless, and my sense of accomplishment was boundless – The ascent and descent took me 2.5 hours and was definitely my favourite experience in Sri Lanka.