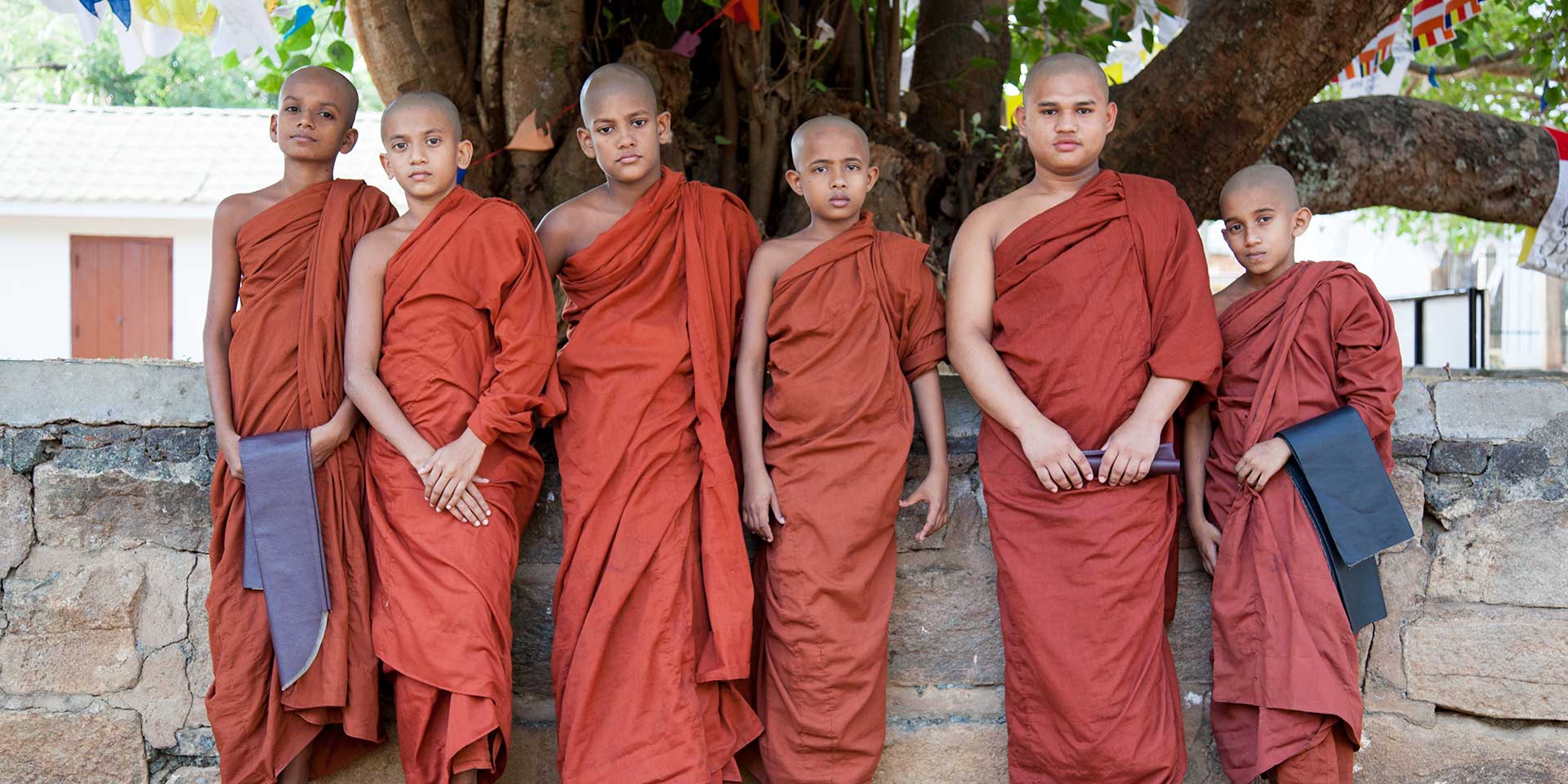 Spanning the area from medieval Kandy in the south to the first capital of Anuradhapura in the north, over to the second capital of Polonnaruwa in the east and incorporating the spectacular cave temple of Dambulla and rock citadel of Sigiriya in the center, Sri Lanka’s Cultural Triangle is dense with the superb ancient sites and the country’s fascinating history.

Whether your trip to Sri Lanka includes the stunning beaches in the south, the lush highlands terraced with tea plantations or a wildlife safari in one of its national parks, it’s worth making the effort to venture into the country’s heart to explore the Cultural Triangle to get a deeper sense of history. Located in the southern end of the Cultural Triangle, Kandy is the second largest city in Sri Lanka today. Formerly the capital of the Kandyan Kingdom, it resisted repeated attacks by the Dutch and Portuguese; as much of the rest of the island was captured and colonized, Kandy clung fiercely to its independence. As such, even today it retains its status as the cultural capital of the country.

Kandy is a pleasant place, built in orderly fashion around a manmade lake and most notable for two things: the iconic “Temple of the Tooth”, and the Ersala Perhahera festival, the largest in Sri Lanka featuring more than 100 elaborately-decorated elephants and 1,000 dancers and drummers.

Most tourists come to Kandy to visit the Temple of the Tooth, so called because it houses a relic tooth of Buddha. It is Sri Lanka’s most important Buddhist temple and it is nearly always crowded during the evening puja (or act of reverence to the gods). Local pilgrims pack the temple for an opportunity to see the golden casket which houses the tooth fragment (the tooth itself is rarely seen). Drummers play rhythmically during the puja, and devotees pass by the small room that houses the tooth to pray. I have to be honest and say that this all sounds a lot cooler than it really is, though for Buddhist Sri Lankan’s and most tourists, it is essential to pay a visit here.

Each evening there is performance by traditional Kandyan dancers, which is quite well done, but the fact that it is in an auditorium crowded with people does detract from the experience quite a bit for me. After the dancing, the performers take turns running over red hot coals outside, and at the end they happily chat with tourists and pose for photos. Founded in 377 BC, Anuradhapura was Sri Lanka’s first capital, and though its intriguing history includes wars and ruin, it is – amazingly – still functioning, perhaps thanks to its cultural importance to Sri Lankans. Once home to the greatest monastic civilization on the planet and packed with monasteries and stupas, the city remains sacred to this day. Its temples are always crowded with pilgrims and large groups of local school children on class outings, but I saw more wild monkeys than foreign tourists when I was there, which was both a delight and slightly alarming as they were quite territorial and aggressive.

My first stop was the iconic white dome of the Ruwanweliseya stupa, which represents heaven or the head of Buddha, depending on who you ask. Built by King Dutugemunu, the stupa’s most notable aspects are its enormous sculpted elephant heads, carved into its surrounding walls to hold up the structure. It was quite eery to have the place completely to myself.

Next I headed to the brick-colored Jetavanarama Stupa, which at 400 feet is the largest in Anuradhapura. Originally the centerpiece of the great Jetavanarama monastery, founded by King Mahasena, it was as devoid of people as Ruwanweliseya.

Sri Maha Bodhi, however, was very crowded with local pilgrims and Buddhist monks. A temple stands here, built around a sacred Bodhi tree; supposedly grown from a sapling from the tree under which the Buddha attained enlightenment, it’s one of the oldest trees in the world and has been cared for by monks for 23 centuries. It’s surrounded by colorful prayer flags, but in all honesty, it looks its age and if not for the iron braces propping it up, it probably wouldn’t be standing at all. Here I also met a group of young monks and had a short chat with them about the Bodhi tree, and they kindly posed for some photos.

We also walked past Thuparamaya Stupa: Sri Lanka’s oldest stupa, Thuparamaya is known for the large pillars surrounding its white dome, and for supposedly housing the Buddha’s collarbone.

However, most interesting for me in Anuradhapura was running into a Sri Lankan wedding party who were taking photos around some of the crumbling ruins, dressed in traditional Sri Lankan clothing. The entire family, young and old, wanted me to photograph them, and it was great fun experiencing a slice of tradition while getting to know the people.

I visited Sri Lanka’s second capital city way back in 1992, when the civil war was raging in much of the country (in fact, not so far from Polonnaruwa), and foreign tourists were mostly limited to adventurous Europeans on coach tours. Living in Hong Kong at the time, I had ventured into this area on my own with a private guide and I was the only person in the place but for and elderly Sri Lankan monk, who appeared to be a caretaker of sorts. However, that is not to say the area was devoid of life, as there were bands of monkeys making their presence known nearly everywhere I went.

Most notable for me in Polonnaruwa were the giant carved rock Buddha statues – standing, seated, and reclining – at Gal Vihara, all carved directly into the side of a large granite rock in the 12th century by Sri Lanka’s last king. It was amazing to me to be able to marvel at them without any other tourists around, but I suspect things are different these days, unfortunately.

Other notable sites within Polonnaruwa include the Quadrangle, otherwise known as Dalada Maluwa, which contains some of the largest and most sacred monuments in the ancient city including the temple housing a tooth relic. It is also home to a large concentration of wild monkeys. Lankatilaka, with its impressive carved walls, can be found here as well, and inside stands a huge headless Buddha.

Polonnaruwa is an impressive place, and although it’s a bit out of the way I recommend a visit if time allows. It is also possible to visit nearby Minneriya national park to see wild elephants in large numbers.

Dambulla lies at the heart of the Cultural Triangle, and is the best base for most of the attractions in the area. I stayed at the Heritance Kandalama hotel, widely regarded as the best place to stay in the area. Designed by Geoffrey Bowa, the hotel sits on the side of a mountain and is home to a rich array of vegetation and a pack of Macaque monkeys.

The cave temples at Dambulla are a UNESCO World Heritage site, and among the most impressive caves I’ve ever seen (only the Mogao Caves in Dunhuang, China can compete). While the area contains more than 80 cave systems, there are five primary caves in the temple complex, each from a different period in history and dating back as far as the rule of King Valagambahu I in the 1st century BC.

You have to make the walk up the side of a mountain for about 10 minutes to reach the entrance, but inside, the level of detail on the painted walls and ceilings is astounding. There are dozens and dozens of reclining Buddhas, standing Buddhas, seated Buddhas, stupas and numerous other carved figures packed into these caves. On my first visit many years ago it wasn’t too busy, but these days Dambulla can be quite crowded with tourists so it is advisable to go as early in the day as possible. Photography is permitted inside the caves, but no flashes are allowed and they are quite strict.

Sigiriya or Lion Rock was built in the 5th century AD by the troubled but brilliant King Kasyapa. Forced into exile for killing his father, he fled into the jungle and there transformed a giant rock monolith into a grand white palace, complete with gardens, intricate carvings and frescoes and a giant lion to stand guard.

Sigiriya is one of most well-known and iconic sites in all of Sri Lanka, and unsurprisingly, can be completely flooded with tourists. I can’t emphasize enough how important it is to get there as early as possible, ideally when it opens at 8:30 a.m., to avoid the rush. It will be a much more rewarding experience to

After purchasing tickets, you walk up to the imposing mountain and begin climbing a set of 1,200 stairs. It isn’t as hard as it appears though, as the stairs don’t go straight to the top — you end up stopping at various levels. Most notable for me were the impressive frescoes painted onto the side of the mountain, still preserved after so many years. Also of note is the “Mirror Wall”, a wall of rock so highly polished that that the King could see his reflection as he passed.

After hiking for 30 minutes or so, you reach the remarkable “Lions Staircase”, where the two huge lion claws carved out of the rock at the base are the only remnants of the ancient sentinel. Many tourists will rent jackets here to protect themselves from the possibility of being stung by bees — there are some huge hornet’s nests on the sides of the mountain, very near to the staircase, and my guide told me they get extremely agitated by the loud tourists passing by; they’ve even stopped allowing helicopters to fly over Sigiriya to avoid angering the bees.

Once reaching the top of the staircase, you find yourself among the ruins of King Kasyapa’s sky palace, with bathing ponds, gardens and fantastic 360-degree views of the area below.