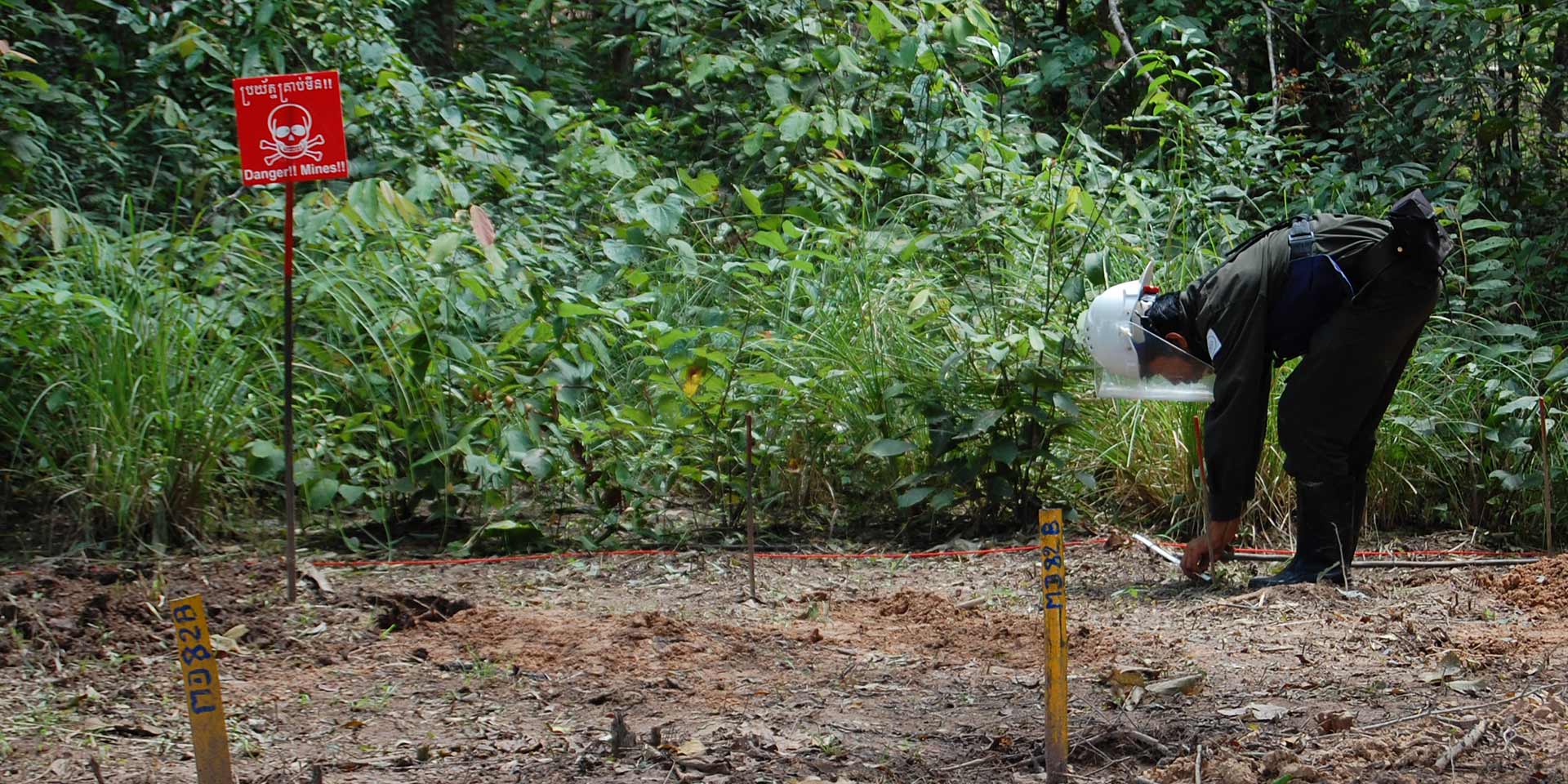 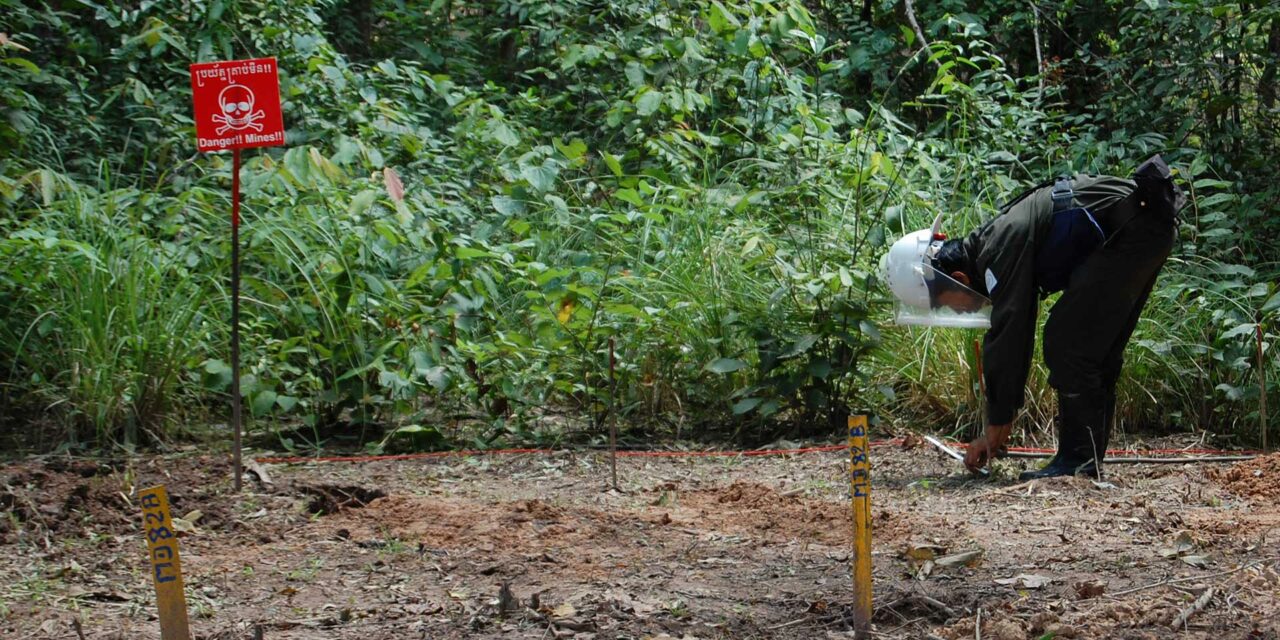 It’s estimated that there are over 100 million active land mines in the world, or one for every 52 people. To me, and probably to most people, that is a terrifying fact indeed. I recently visited a land mine dig in Cambodia to learn more about these unexploded devices that continue to exist in soil across Asia and the world. The trip was a definite eye-opener for me, exposing how truly dangerous land mines are. My experience with The HALO Trust, who gave me my introduction to and tour of land mine clearance in Cambodia, was one for which I was truly grateful.

Of all the land mine clearance organizations in Cambodia, The HALO Trust is certainly one to be admired. An NGO registered in the UK, HALO has over 8,000 full-time staff in 13 countries. They have neutralized 1.4 million land mines and 52 million bullets, as well as 142,000 assault rifles. They’ve cleared over 8,000 land mine fields, which, if assembled together, would equal about 75,000 American football fields. HALO carries out its operations in Central Asia, Southeast Asia, the Horn of Africa, Southern Africa the Caucasus and the Balkans. They’re also committed to working in Afghanistan, at least until the year 2020. They are major players in the global land mine clearing scene.

These people, and others like CNN hero Aki Ra, put their lives on the line on a daily basis. Once a child soldier with the infamous Khmer Rouge, Aki Ra, who was featured in Time, has dug up over 50,000 land mines himself.  Aki Ra’s Land Mine Museum is on the way to see the famous Banteay Srei temple on the outskirts of Angkor.

My holiday in Cambodia began in this fashion: we started at the HALO Headquarters (HQ) with a briefing, then visited a mine field and met an ex-Khmer Rouge family still living and farming on an active mine field (yet to be fully cleared), before visiting leader of the Khmer Rouge, Pol Pot’s grave.  I had driven from Bangkok to Siem Reap with my family, about six hours in total. We stayed at Amansara, formerly the guest villa of King Norodom Sihanouk, and easily the best resort in Siem Reap.

As my land mine adventure continued to unfold, I met with The HALO Trust for a day-long inspection of their field HQ, de-mining site and various areas along the Cambodia-Thailand border. There was also a visit to Pol Pot’s cremation place. To my surprise, the Khmer Rouge is still popular in these areas, as it was one of their last strongholds.

Visiting a landmine site seemed like a “normal” day in the field for me. (Not that I normally inspect mine fields as a daily event, or ever had done so before. But when I travel I’m generally up for anything). However, bringing my wife and 12 year old daughter along to stroll along some mine fields did cause me to pause … a bit. It was, I was assured, perfectly safe, so off we went. It wasn’t a day at the mall or time spent at the movie theater to be sure. But let’s be honest, who would believe, in actuality, such a claim?

We met with our HALO representative for a drive to their operations center for Otdar Menchey Province. In no time, we were in Anlong Veaeng for a briefing, wherewe were given a short history of why land mines were so prevalent in Cambodia, and to my surprise, I learned that most of the land mines in Cambodia were actually laid by the Vietnamese, and not the Khmer Rouge (though the Khmer Rouge did lay many mines and employed child soldiers like Aki Ra to do so). The mine clearing has been on-going for years and there remains a significant amount of work to be done, mostly along the Thai border. Millions of mines remain, and no one knows the exact number or how much work is left. During our tour, we were shown different types of mines and explosives that were dug up in the surrounding area.

Next, we drove out to an active mine clearing operation for an inspection. We were given another briefing, this time on safety, and outfitted with mine clearing equipment — protective vests and face masks – before being whisked away to see active mine clearing. To be honest, this protective equipment probably wouldn’t save you from being killed if you stepped on a mine. It’s also difficult to move in and work in, and very hot.

It was a sobering sight, actually seeing markers in the ground that represented where mines had previously been cleared. We met with one veteran Khmer de-miner who had personally cleared more than 1,000 mines. That is a considerable number, given the painstakingly slow pace of finding and disarming land mines.

We met one family of former Khmer Rouge — their home was right in the middle of the mine field. I could see markers in various places, where they were actively growing rice!. This was a strong dose of reality for me. This was really happening. We had entered a kill zone,and walked out alive — and somehow smarter. We had survived. In extreme northern Cambodia, between three to five people die every day from a land mine. The battle continues to be fought.

Globally, there are land mines in the Korean DMZ, Serbia, Israel and many other countries. If we are still cleaning up after the Vietnam War four decades later, how long will the clean-up in Iraq and Afghanistan take? Unexploded Ordinance, or UXO, is a major problem around the world.  For now, we can take only baby steps. I’ve taken mine, along with my family. Perhaps it’s time for you to take yours?