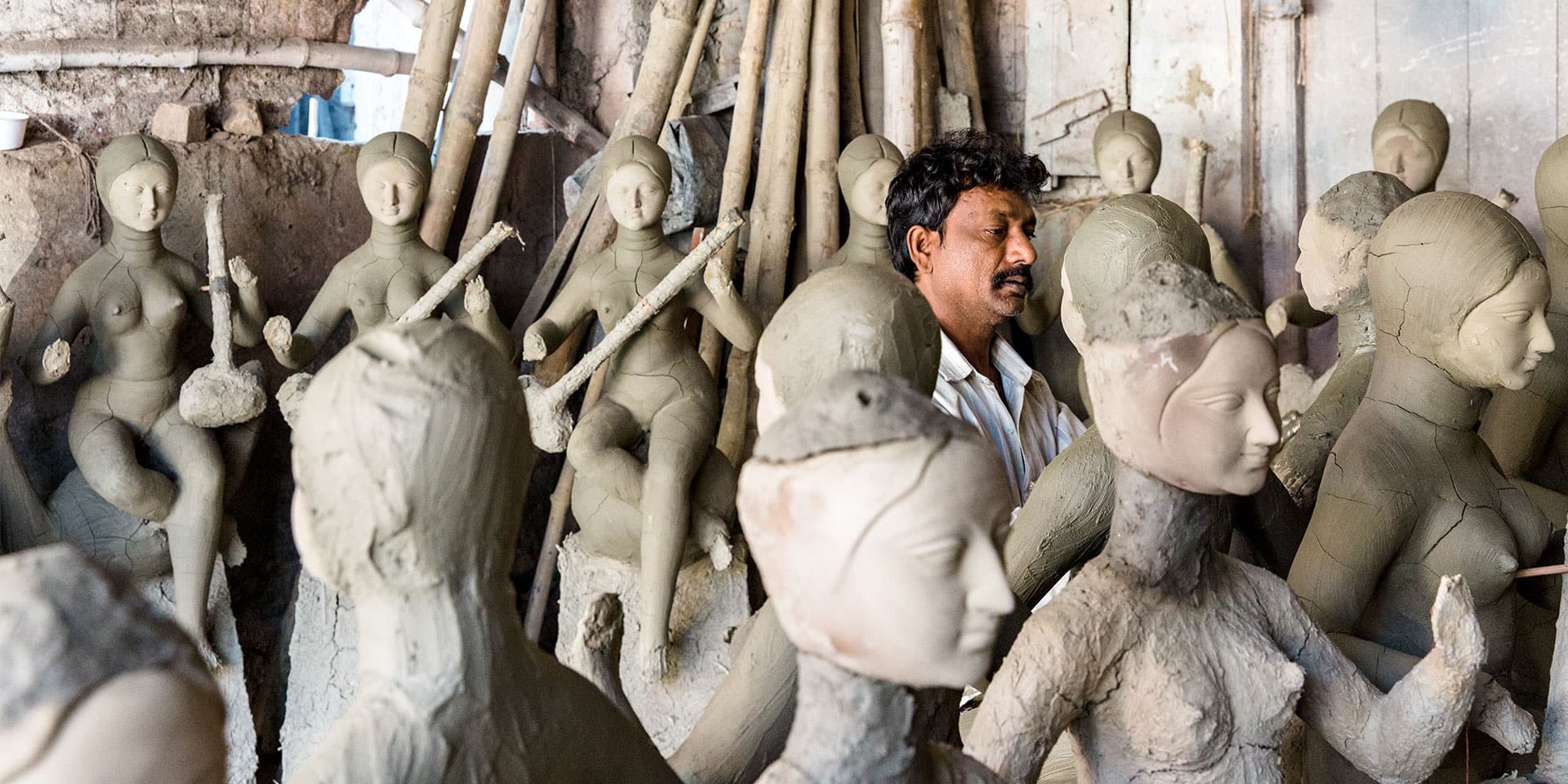 Stepping outside of the yellow ambassador cab, I spot a group of men on the pavement loading a lavish model tiger onto the back of a truck. The eyes of the beast burn yellow, and the huge white teeth look freakishly lifelike.

Away from the traffic and flashy stores of Park Street, the district of the city most tourists stay in, Kumartuli is like arriving back in small-town India. The area is a labyrinth of lanes and workshops and the 400 men and women who work here produce huge amounts of statues for Indian festivities up and down the country. Clay and straw come together and are sculpted into Ganesh or Saraswati, Kali or Lakshmi. Kumartuli is where India’s gods and goddesses come to life.

Any traveler to India will most likely have the opportunity to witness the country’s many spiritual festivities. It often feels like each day is another excuse for a celebration, and you’ll find an array of these events in the towns and cities up and down the country throughout the year. At many of the festivals, giant god statues are used to parade, devote and worship. They are often life-size, intricately painted and at the end of ceremonies – burnt or sacrificed to the countries Holy rivers.

It’s in Kumartuli in Northern Kolkata that many of these statues are moulded, sculpted and painted from mere straw and clay. In the 500 workshops which exist down these dark and narrow alleyways, the visuals of many of India’s most colorful festivities begin their life. Kumartuli is one of the oldest areas in Kolkata, and the literal translation of the word Kumartuli is derived from the Bengali word kumore, meaning “potter.”

ABOVE: Woman walks through a parade of gods in Kumartuli.

There are many stories of the history of the artisans in the area. It is generally thought that the makers came from Krishnanagar, a town in West Bengal around 100km from Kolkata. It is thought that here, artisans created icons of the goddess Durga for the Maharaja Krishna Chandra (a Maharaja is a great king).

The artisans were brought to Kolkata in 1757 by Raja Nabakrishna Deb, who wanted to celebrate Durga Pooja in honor of the British victory at the Battle of Plassey. During this time, the new British rulers set up many districts around the city where tradesmen and artisans could practice their crafts. Ahiritolla was set up for milkmen, Colootolla for oil merchants and Coomartoly, as it was known at the time, was the name used to described the area given to the idol makers and potters. Many more families moved from Krishnanagar and other towns in West Bengal to take on the extra work demanded from the wealthy Hindu families in the new British Calcutta.

ABOVE: Sculptures in the early stages.

Today, the area is known as Kumartuli and is home to around 150 families who live in the lanes alongside the workshops. It’s in the months before the Durja Puja, a celebration which happens in Kolkata in October each year, that the numbers of the district swell as artisans from out of town come into the area to help with the extra icon making needed for the festival.

Durja Puja is a celebration of the mother goddess and the victory of the warrior Goddess Durga over the evil buffalo demon Mahishasura. The Kumartuli workers create hundreds of Durja Goddess icons in the months before the Puja. The end of the festival is marked by the immersion of the idols into the river, and after months of hard work, the makers see their idols sacrificed to the gods.

ABOVE: Plastering over the sculpture forms.

Even on the cool December day I visited, many of the workshops were still open – and the sunnier streets were packed with the clay figures of goddess icons drying in the sun. As it’s only a few days before Christmas, Kolkata is fairly quiet of foreign tourists, most of whom opt for the sunnier South or hill stations like Darjeeling around the Christmas period. But for most of the year, tourism has taken off in Kumartuli – with small tour groups visiting with local guides, keen to show the travelers a different side to the city.

Flight of the Hornbill: India’s Northeast by Helicopter

As I walk through the lanes, light beams sporadically through the mesh covers which shelter the alleyways from the midday sun, but most workshops are dark – with lone candles or light bulbs lighting the views the artisans as they carefully carve the faces of goddesses or the prayer hands of the in-demand gods.

The icons are made primarily out of clay and straw, materials which are transported down the Hooghly river which sits footsteps away from the Kumartuli district. In addition to the larger icons created for festivals, during the less busy periods, many of the artisans will focus on making smaller icons which can be bought for home decoration or tourist souvenirs. The effigies are also exported to around 90 countries around the world, where they are used for festivals by the Hindu communities living around the globe.

As India modernizes, spirituality remains at the core of day to day practice for millions of people. Today, India’s festivals might be documented on smartphones through selfies and online videos, but the idols these makers create are still a center point for the festivities, as they have been for hundreds of years. It seems the artisans of Kumartuli won’t be out of a job anytime soon.