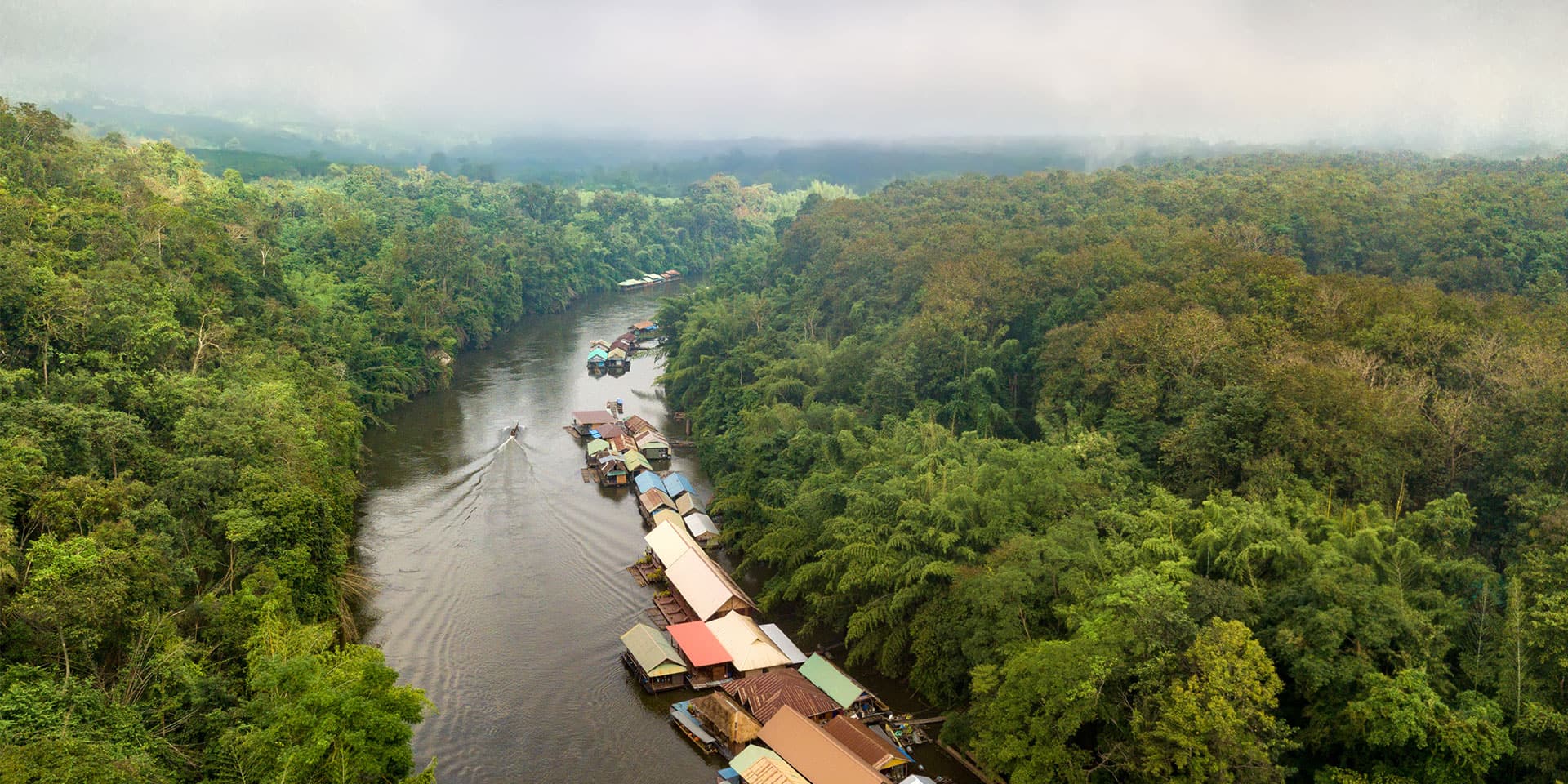 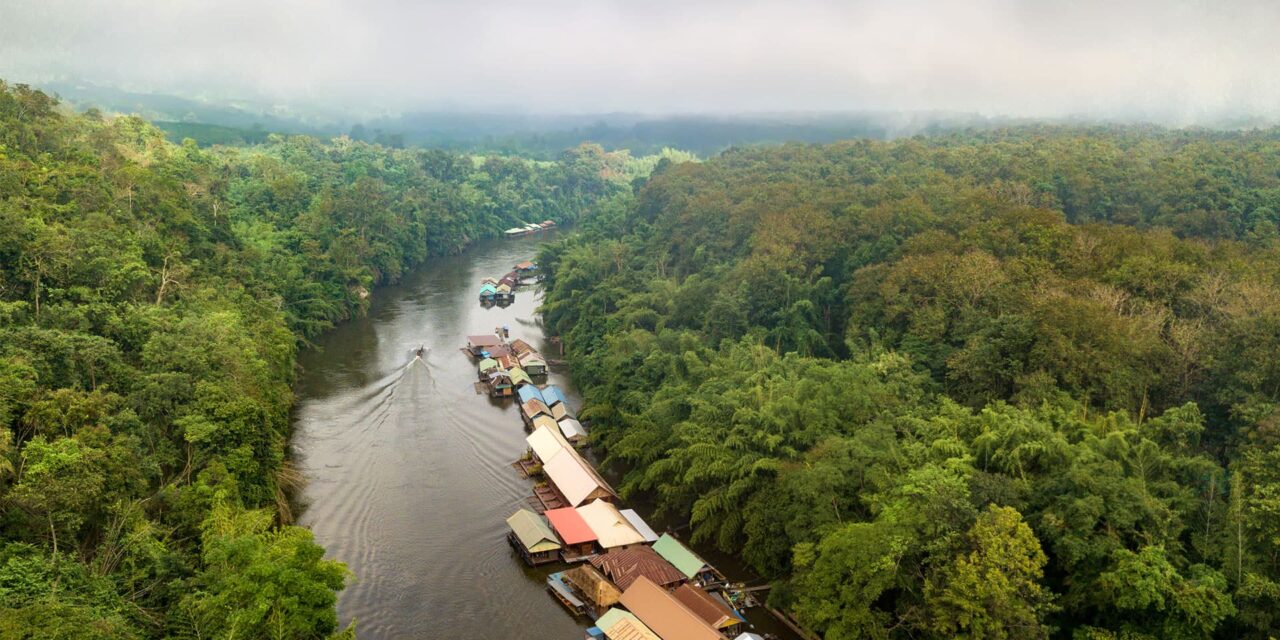 Only 135 kilometers from the capital, Kanchanburi is known today as home to national parks, waterfalls, and pristine jungles carved by sparkling rivers. Seventy-five years ago, Kanchanaburi was known for something very different. On October 17, 1943 the occupying Japanese military forces drove the final spike completing the Thai-Burma Railway, later made famous by the novel Le Pont de la Rivière Kwaï and movie of the same name, The Bridge on the River Kwai.

Commonly known as Death Railway due to the 100,000 plus POW and forced Asian laborers (romusha) who died building it, of the original 310 kilometers laid in Thailand a 55-kilometer stretch of the railway still functions today, drawing tourists from around the world to ride over its rickety bridges and to take in the scenery as it hugs the banks of the River Kwai Noi.

To mark the anniversary I decided to come down the river from the furthest accessible point north, visiting historical sites from the war, national parks, and tourist spots along the 160 or so kilometers the route would take me.

ABOVE: Kayaker not far from the Vajiralongkorn Dam.

In 1985 the Kwai Noi was tamed with the Vajiralongkorn hydro-electric damn which submerged the final 50 kilometers of the Thai railway beneath the Khao Leam reservoir near to the point where it crossed into Myanmar at three pagoda pass.

The trip began just below the dam in Tong Pa Puam, a little town nestled among jutting limestone peaks hung with fat purple rain clouds. Depending on the flow of the river it could be as few as four or as many as seven days back to Kanchanaburi. I was supplied with dried food, camping needs, and a hammock strapped to my splash deck; today the river is dotted with floating guesthouses and hotels. My traveling companion would be One Fourteenth of an Elephant, Ian Deny Peek’s biography of his four years as a prisoner working on the railway.

The first day slips by, mechanically passing the paddle through the water. The sun climbs to its zenith but sitting inches above the river it never gets too uncomfortable – passing by farmland, empty resorts on manicured lawns, and the occasional lone fishermen throwing his hand net from the prow of a long tail boat.

ABOVE: Kayaking the Kwai in Kanchanaburi.

Later making camp on a white sand beach among the enormity of the surrounding bush brings home the isolation that Peeks felt from the outside world when he wrote:  “Any man can walk out at any time, but where would he go?” This sentiment was echoed in the film – famously shot in Sri Lanka – from the camp’s stubborn Colonel Saito: “There is no barbed wire. No stockade. No watchtower. They are not necessary. We are an island in the jungle. Escape is impossible. You would die.” The film distorted the reality by, among other things, including a successful escape; by all accounts that never happened.

ABOVE: Houses along Sai Yok Yai.

The river narrows and quickens in this deep limestone valley. Waterfalls spurt from limestone cliff faces and the jungle is a solid wall of green shadow.

The base of the cliffs have been scalloped by eons of the rivers’ current and the sound of the water echoes all around, blotted out intermittently by the bellow of un-muffled exhaust from long tail boats in the distance pulling rafts of tourists.

Sai Yok National Park, the former location of the Kin Sai Yok POW work camps is where Peek spent time on a timber crew and even in those poor conditions wasn’t immune to the beauty of the area. He reflected on the scenery in his book: “Often times while working above the high ledges, looking across the valley I can forget the pitiful condition of our lives here and revel in nature’s majesty.”

ABOVE: Waterfall of Sai Yok Yai.

I spend the night in one of the parks raft houses. There are newer, nicer places just down river but it’s quiet enough within the park to sit on the floating veranda with my binoculars spotting kingfishers, egrets, storks and night jars which dart and skim along the river’s surface.

At first light the air is almost cold and mist hangs from the limestone cliffs. Small fish collect in the first pools of sunlight, sparkling gold, silver and blue off their scales. Since the river is dam controlled the current rises and falls at its masters will upstream. Usually the water runs fast in the morning so that the first kilometers of the day pass by quickly.

ABOVE: Remnants of the Death Railway.

The Hellfire Pass Memorial Association and the Hellfire Museum was founded by the Australian government in memoriam to the thousands of her troops who died at the Hin Tok camps. The pass was the most extensive cutting of the railway. Rock and earth was dug and blasted out to gouge a passage up to 25 meters deep and 75 meters long. The men here worked 24 hours a day; making holes for explosives by hand with hammer and taps. The POW’s dubbed it “Hellfire Pass” for the menacing glow that emanated from the hole when lit by torches at night.

After the morning’s paddle and the afternoon’s hike in the heat I opt for a night of high end glamping in an air conditioned tent with a comfortable bed and hot running water. I sit in the resort’s freshwater, riverside pool and enjoy an ice-cold beer before a well prepared fiery jungle curry, a local specialty. After watching the sun set and the sky fill with stars I retire to almost instant sleep in the luxurious comfort.

ABOVE: Train on the Death Railway bridge.

Diving Krabi and Phuket: 5 Interesting Sites Under the Andaman

At a wide bend in the river, referred to as “arrowhead” during the war, the first glimpse of the still functioning railway comes into sight. Wang Po Viaduct stands after 75 years as a testament to the POW’s ingenuity. Built with only the most basic materials, the 500-meter viaduct – which still supports four trains a day – hangs precariously off the limestone cliff. The engineering feat is made even more impressive by the fact that it was completed in only 17 days, under the lash and with little more than hand tools.

By late afternoon I arrive at the outskirts of Ban Kao town, the Wang Sing station on the rail line, and Prasat Muang Sing, or Lion city, a Khmer temple ruin that once marked the westernmost frontiers of the empire. Dating from the 13th century, its two acres of laterite walls and stuppas are a reminder that the railway was not the first major project undertaken with forced labor along this river.

ABOVE: Monument at the Chung Kai Cemetery.

The serene backdrop of trees, flowers and towering rock cliffs gives way to fields of corn, sugarcane, and grazing cows. The river widens and the current slows, making it a long slog to reach the bridge where the Kwai Noi meets the Kwai Yai to form the Mae Klong river that flows another 200 kilometers to the sea.

I opt out at Chung Kai Cemetery only a few kilometers from Kanchanaburi city, built on the site of the original Chung Kai POW camp and hospital where most of the 1,740 POWs were laid to rest. Today its manicured gardens and flower beds are maintained by the Allied War Graves Commission.

ABOVE: Flowers on the graves of the war dead.

The Thai Burma Railway was completed on October 17, 1943. Peek made it back to England, but of the estimated 300,000 souls who slaved on the railway, at least 85,000 Asians and over 13,000 Allied POWs didn’t survive. Those who came out alive weren’t just lucky; it took indeterminable self-control, ingenuity, and tenacity. Many who survived the construction of the railway never returned home. Some were sent to Japan to work in mines, some to other projects in Vietnam, some were simply marched to death for want of any other planning.

Peek fantasized in his book about making a trip much like my own: “Several of us think that, after the war we would like to come back – hire a motorized barge and go upriver for a week or so then quickly back with the current to Kanburi. A few books, a camera. Maybe a fishing line, would able all that we would need for comfort and to pass the time in peaceful relaxation.”

Most visitors to Kanchanaburi will make it to the bridge for a quick look. Some may take a tour that includes waterfalls, tiger temples, and caves and somewhere amid the day’s fun a tidbit of the railway’s history surfaces. But, for some, it’s a pilgrimage to visit the sites, as inscribed at the Chung Kai Cemetery, “Where Their Names Livith For Evermore.”