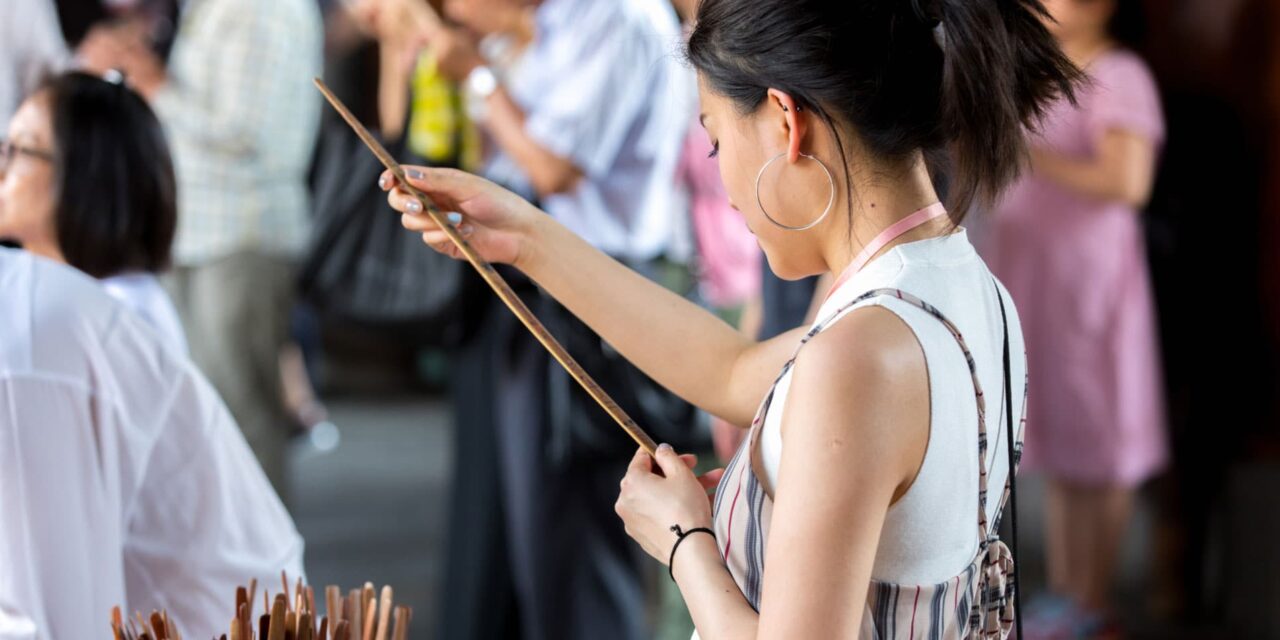 Forget the dating apps, a few Taipei temples could replace your Tinder. Taipei is a pretty romantic city, and doubly so with the help of Yue Lao, also known as the “old man under the moon” or “the matchmaker.” This Chinese cupid is a Taoist deity who receives the names of eligible men and women once they are of age and pairs them in his book. Yue Lao is said to tie a red string between lovers to represent that they are fated to be together. For the spiritual and romantic, there are more ways than one to find love in Taipei’s temples.

ABOVE: Lungshan Temple, one of the most popular temples in Taipei.

Without a doubt the most popular and iconic temple in Taipei, Lungshan (or Longshan) Temple is an ornate complex built by Fujian settlers in the 18th century during the Qing Dynasty. The temple features Buddhism, Confucianism, and Taoism, including Yue Lao. Split into three sections – the Chinese cupid can be found in the back hall.

But, don’t rush straight for Yue Lao. The custom is to start in the center and go out, then right to left. It’s important to introduce yourself and explain your aims to the deities, as well as bring some offerings.

The temple provides three complimentary joss sticks for visitors on entry to pay their respects; however, other offerings should also be prepared, such as chocolates or fruits. The offerings should be in even numbers and must be placed in front of the the idol after making your round with the joss sticks.

ABOVE: Woman with kau-chim lot.

For those who have someone in mind, this is the chance to ask Chinese Cupid whether he or she is the one through “poe divination.” They are two (usually) two pieces of wood with a positive and negative side to answer yes or no questions. ‘Yes’ is when the poe are one negative and positive, ‘no’ is any other combination. If the answer is not yes, then he or she is not the one.

ABOVE: Kau-chim, or chi-chi, sticks and poe divination items.

Lost lovers who don’t have someone in mind should proceed to the kau-chim – a sort of fortune via drawing a prophetic lot. Take the oracle and one red string and keep the string on you to allow Yue Lao to work his white-bearded magic. It is said that romance will find you within six months.

ABOVE: Xia-Hai City God Temple is located in Taipei’s old district, built in the mid-19th century.

A small temple chiefly dedicated to the City God, Xia-Hai City God Temple can be found in Taipei’s old district and houses 60 other deities. Built in the mid-19th century, it started out as a Taoist temple but now also worships deities from Buddhism and Confucianism. Similar to Longshan Temple, there is a ritual for lovers.

First, offerings of joss paper, joss sticks, money in red envelopes, red strings, and wedding candy must be prepared – most of which can be purchased at temple reception. Flowers, signifying a blooming relationship, are also encouraged. Three joss sticks are lit at the incense burner outside as you introduce yourself to the deities. If you already have a red string from another temple, simply use it as part of the ritual. More than one can cause a tangled romance.

Next, pick up the offerings and pay respect to the Justice and Brave deity for peace, the Wife of City God for family peace, and Lady Buddha for peace of mind. Then, return to the incense burner in front of the temple and put the joss sticks inside. Afterward, eat the wedding candy and put your money and red string above the incense burner and move it in a clockwise direction three times. Leave your wedding pastries in the temple reception for others to share and return your joss money to the collection box. It’s just that simple – hopefully. Should the red string get lost, don’t worry. Supposedly it means romance is on its way.

A little different to the above, Chih Nan Temple is for those who seek to end bad romance. It is a Taoist Temple built in late 19th century on Houshan, also known as Monkey Mountain, with 80 hectares of ground. The temple was originally only dedicated to Lu Dongbin, the leader of the Eight Immortals in Taoism, but now also includes Buddhist and Confucian deities.

It was said that he would cut bad or ill-fated romantic ties for you. The suggested offerings include flowers, five fruits, and, of course, joss sticks. The ritual starts at the main Chunyang Chapel in the middle, then the Lingxiao Chapel which is dedicated to the Jade Emperor, and Three Pure Ones. Next is the Daxiong Hall, Jiuhuang Xing Yuan, and lastly the Dacheng Chapel that is dedicated to Confucius. If successful, return to the temple with your name, birthday, address to thank Lu Dongbin.