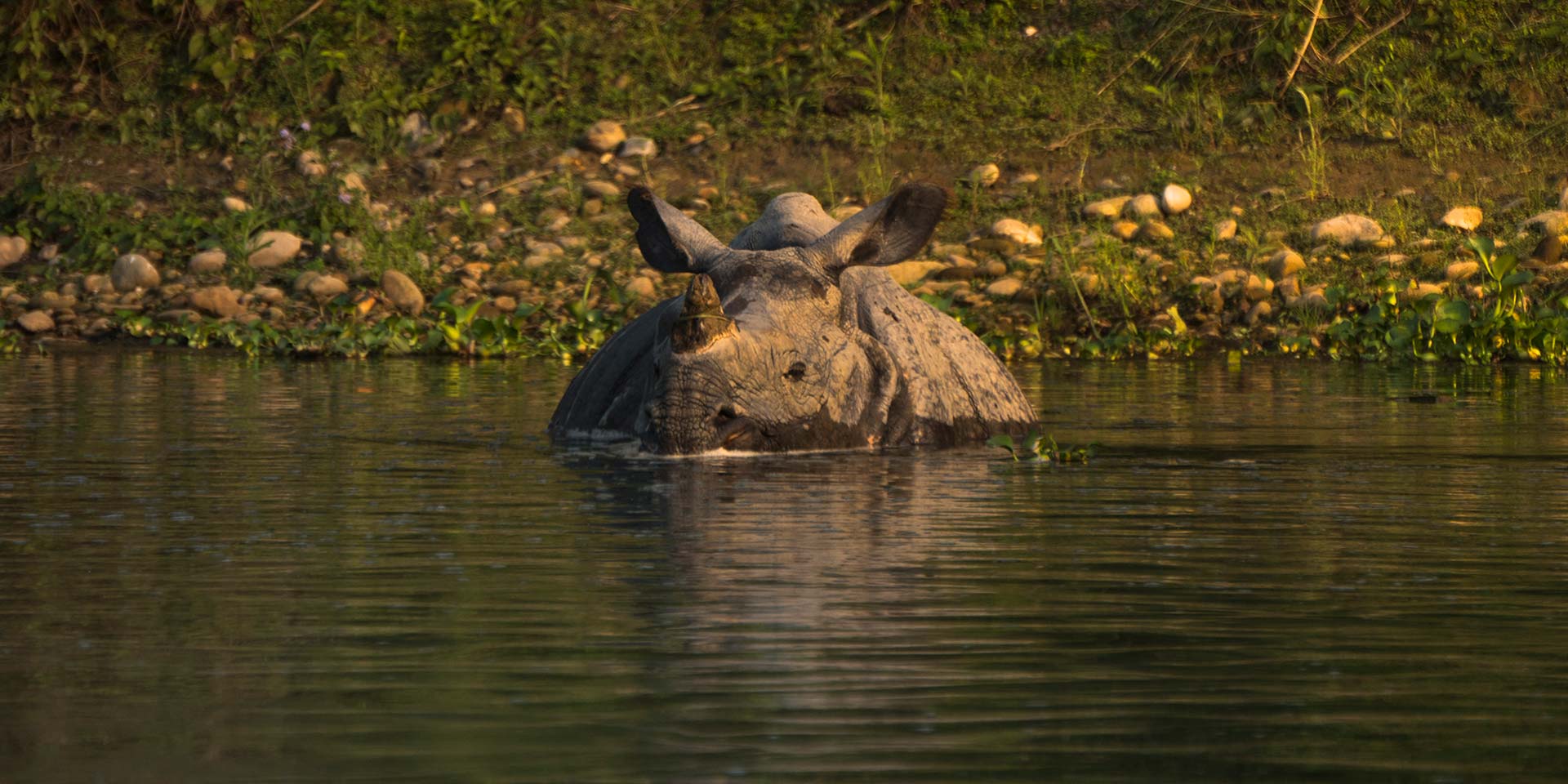 “Buttered popcorn,” Baburam says with a smile. “Tiger poo.” He searches the air with his nose, wafting the scent toward his face. He nearly stumbles on a pawprint – softly made, less than an hour old. “If you see a rhino, you are lucky,” says Baburam Mahado, my guide through Chitwan National Park from Kasara Resort. “A tiger? Very, very lucky.”

For most, Nepal conjures to mind the snow-capped Himalayas and the colorful culture of Kathmandu, but in places like Chitwan and Bardia, tigers, rhinos, deer, and leopards wander the warm forest mornings.

Chitwan has made its way onto the tourist trail, part of the Kathmandu and Pokhara circuit. Whether or not one sees a rhino is on luck and the seasons, but for nature lovers there is much to see throughout.

Guide and tracker with Kasara Resort, Baburam, is a member of the local Tharu tribe, an ethnic group known for their relative immunity to malaria, mud plaster houses, tattoos, and, in this Chitwan locale, their free growing marijuana. Most live in subsistence conditions in and around the Terai region and bordering India.

“I didn’t have the chance for higher education,” Baburam says. “So I […] got a loan from the bank and I went to Dubai to be an office boy.” Working his way up through the years, when the financial crash came for Dubai, he made his way back home to become a naturalist for Kasara Resort in the land he knew so well.

ABOVE: On a jeep safari in Chitwan. Both jeep and walking safaris are available in Chitwan, as well as the rightly maligned elephant safaris.

The hottest months, March to June, are the best time to visit; the temperature can get prohibitively hot, but as long as the rains stay away, the grasses will be shorter. Travelers should be warned, however, that April is the burning season, so the foggy haze of the park comes with the acrid smell of smoke. This is, sadly, true of everywhere from Nepal to Thailand and beyond. On my return flight, it seemed as though the whole of Asia was burning.

The rhino is the prize of Chitwan. When travelers land at sparse Bharatpur airport, they’ll see a mother and calf statue at the entrance. Once, this area was a hunting ground for the Nepali and foreign elite, where they would kill tigers, bears, and rhinos by the dozen. Today the land is protected. Poaching is no longer an issue.

The rhinos of Chitwan are the one-horned variety, rhinoceros unicornis, and around 600 of the only 2,000 in the world can be found in Chitwan. Other than Assam in India, Chitwan is one of the best places in Asia to spot these animals.

ABOVE: One-horned rhino in Chitwan, or rhinoceros unicornis.

The first rhino spotting came from a jeep from afar. A white, rounded back could be seen through the tall green grass. For many, this is as close as they come. Later we were able to climb a outpost to look out over a small, savannah-like clearing and spotted another, again, far away and barely visible to the naked eye.

After an hour of trying to track down more rhinos, we finally came across one grazing close to the road and were able to photograph the animal for about 10 minutes. This would be our most rewarding sighting of the day. The animal’s thick skin maintains its imposing white hue up close, but it moves mechanically as the animal feeds, it’s plate-like armor shifting around its body. The beast seems almost like a clockwork creature. The rhino is placid – aware of our presence but unconcerned. When you weigh 2,000 kilograms, there are few animals in the forest that can frighten you, least of all a 4×4 filled with squishy humans.

ABOVE: One-horned rhino seen from a jeep in Chitwan.

About 30 minutes later, we make another sighting of four rhinos, but the most visible are a mother and her calf. The mother isn’t placid. She’s panicked. We try to observe without threatening the great beast, but she gruffles and tries to back away; when it’s clear we intend to watch her regardless, she and her calf run at a gallop for safety.

“If we go for a jungle walk and we see a rhino calf, we won’t go close,” Baburam says. “You have to be careful around the mothers, always the mothers.” A week previous, a guide and a guest were charged by a rhino; with three broken ribs, the guide was sent to Kathmandu for treatment. These are beautiful beasts, but foremost wild.

I would learn this on my final safari to my near peril. Rhinos take the same well-trodden paths through the forest, making them relatively easy to track. On spotting the largest rhino I had yet seen in a swamp, my guide pulled me away. I was standing right on one of these paths. Before I could so much as snap a photo, the beast stampeded up from the swamp – right over the spot on which I stood – ripping up earth as it went bounded through the trees. Lesson learned.

Though tigers are rare, there are a few other large animals of which travelers should be made aware. The sloth bears, another large predator of note in the park, are extremely difficult to spot, though their shabby dens can be found throughout.

ABOVE: Spotted deer, or chital, seen on a walking safari in Chitwan National Park.

Royalty and Isolation: On the Road to Upper Mustang

While it is possible to see wild elephants in Chitwan, most that safari-goers see will be the domesticated variety. In many areas throughout Southeast Asia, ideals are changing about the cruelty of riding elephants, but these ideas are less common in India and Nepal. Elephant riding is common here and accepted, though, in the opinion of this reviewer, it is a facet of travel that should die quickly. Domesticated elephants cost around $70,000 a piece, a value that could be put to better use reintroducing them to the wild.

While animals like the elephant, tiger, and even the wild boar are relatively rare, the park is alive with spotted deer, also known as the chital. Many North Americans may not be excited by the prospect of more deer, but they are one of the most photogenic animals in the park. They’re also safe, calm, and will act as a herd within a relatively close distance. On foot patient, quiet travelers can spend more than 10 minutes with a calm enough herd.

ABOVE: Herd of spotted deer hiding in the dry grass.

Hog deer are a somewhat rarer sighting, as they’re usually alone; they are the favorite prey of the local tigers, so if you see one, tigers might not be too far away. Sambar deer are the biggest deer in the park but are much more rare, as are the barking deer – which you’ll hear before you see.

There are some less cute fauna worth a visit in Chitwan, namely, the crocs. Frequent world travelers will be familiar with the look of the common mugger crocodile, but the curious snout of the gharial might be a new experience.

ABOVE: Gharial crocodile in the Crocodile Breeding Center. Gharials are easily found though threatened in the wild.

One of the more interesting facets to being at the Kasara resort is the proximity to the crocodile breeding sanctuary; one boards a canoe for a few sightings of the creature in the wild and is then treated to an up-close viewing of the gharial in captivity.

The babies look like little more than green, basking sticks, but the larger examples in the breeding cages are massive. Females can grow as large as 3.8 meters, but males – notable for their bulbous noses – can grow to five meters and 250 kilograms. Visitors will likely see a few wild gharials on their canoe ride to the sanctuary, but the breeding pairs are exceptionally large. Though they may not be the cutest animals in Chitwan, the gharial croc is critically endangered and vital to the ecosystem.

Monkey’s too call Chitwan home, and regular travelers to Asia will be familiar with the rhesus macaques that are such an ornament of North and Southeast Asia. More exciting, however, may be the gray langurs, a rarish sighting outside of India, and a very photogenic monkey that likes to let its long, gray-white tail hang from the trees.

ABOVE: Gray langur, spotted on a jeep safari in Chitwan National Park.


For the twitcher, every corner of Chitwan has something to amaze. Colorful jungle fowl cross the jeep paths. Peacocks and peahens shuffle in the undergrowth. Kingfishers hunt. The cuckoo sounds throughout the forest. And eagles manicure their wings.

Of particular interest on this journey was the white paradise flycatcher. At first many may not know what they’re seeing, but a fluffy length of white parades across lakes and in the forest thicket. The body is so small and the tail so flamboyant and long that it looks like a stripe of reality has gone a bit mad. Of all the naturalist books Baburam might carry, he clutches his worn “Birds of Nepal” book throughout our adventures. Sightings of yellow martins, buzzards, and Siberian ducks add color to even the most staid safari.

ABOVE: Crested serpent eagle cleaning its wings in Chitwan.


There is much more to be found in Chitwan: leopards, jackals, snakehead fish, pangolins, and porcupines. But the park wasn’t always so kind to wildlife. By the 1960s, the voracious hunting and poaching in the area had left only around 90 rhinos. After malaria was eradicated in the Bharatpur region, the population exploded, and today, as travelers wend their way to the entrance of the park, they will see an agricultural world on fire. Water buffaloes and goats dominated the bucolic landscape, and for now Chitwan National Park remains stable.

Back to Nature: Exploring the Birds and Wildlife of Nepal

Today only one resort, Tiger Tops, can be found inside the 952 square kilometers of the park; the authorities kicked out all the others starting in 2012 out of concerns that their presence would affect the wildlife. For the traveler in the know, the dilapidated hotels of just a few years ago can be found, eaten by the unforgiving jungle in just a few years. However, it has been reported that the authorities may be on the verge of loosening these rules.

The park is clean, but population growth shows little sign of slowing and tourism increases every year. While agriculture hems in the borders of the park, the buffer zone still plays home to people using the river and the forest in ways that cause little lasting harm to the surrounding river and forest.

The tiger populations are increasing, despite severe flooding. The Chitwan of today is not beaters and hunting parties, but tourists in floppy hats looking for tigers. This writer remembers every single one of the nine unicorn rhinos spotted. If you stay in Chitwan long enough, you’ll find what you’re after.