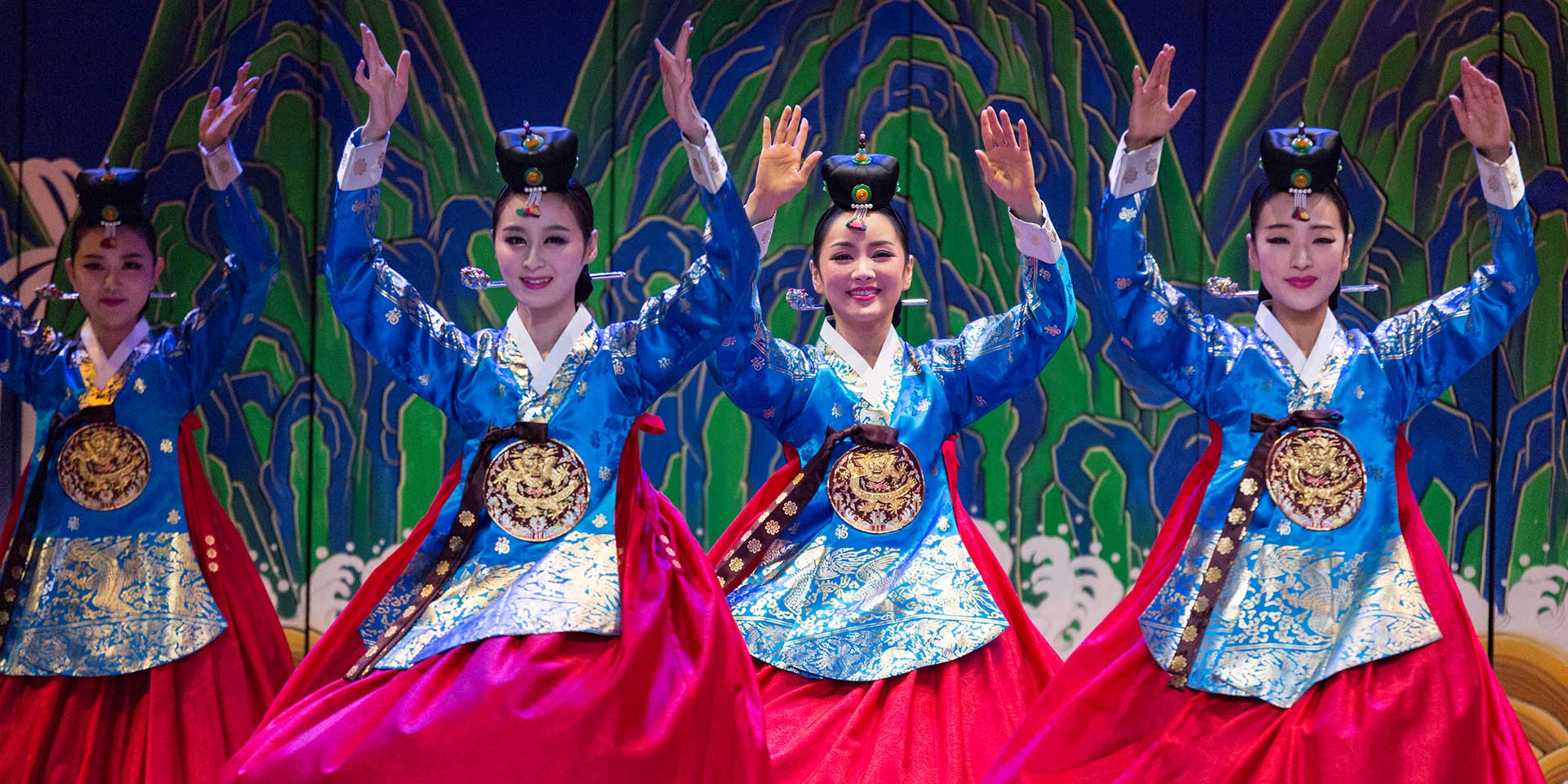 South Korea’s capital, Seoul is a large modern city of 10 million that is situated on the Han River and one of those places that has grown on me after a few return visits. At first, Seoul can seem a bit cold and uninviting; however once you get the lie of the land and work out where to go, it quickly becomes clear how much this city really has to offer. There are some fantastic markets, interesting culture with a blend of modern and traditional, great restaurants and thriving nightlife. I’ve selected some highlights of my trips in the hope of sharing my growing appreciation for this much-overlooked city.

For a taste of pop-culture and the “new Korea”, head over to the K-Live known in Seoul as “the world’s first dedicated K-pop hologram performance hall”. Sound odd? It is, but in a great way! It would be weird enough for me to watch a live K-Pop concert, but watching a live 30-minute hologram concert takes it to a whole new level. To my surprise, it was actually really well done and at times I had to remind myself I was just watching holograms instead of live performers. Of course the crowd was made up predominantly of teenage Koreans, so I was more than a little out of place here. But who cares? It was fun!

Along with the concert, the usual memorabilia can be purchased such as t-shirts and band mementos, but if you plan to visit, make sure you catch the view of Dongdaemun Design Plaza (or DDP) just off the balcony at K-Live. Designed by renowned architects Zaha Hadid and Samoo, the building was built as a cultural hub with a conference all, design museum and other public spaces, but what makes it truly special is the spaceship-esque futuristic design: it’s like looking into the future.

Most people have heard of Tokyo’s Tsukiji Fish Market (famous for its early morning tuna auction), but Seoul has its very own version and I found it to be a more authentic experience – the Noryangjin Fish Market

A sprawling market just south of the Han River, it is best visited in the early morning where you can watch the early morning auctions, but the market is actually open 24 hours a day, seven days a week! Extremely colourful with an impressive variety of seafood on display — from foot-long prawns,  stingrays, king crab, lobsters, clams, mussels, sea cucumbers, sea apples and of course many varieties of fish. I had remembered seeing various travel show hosts visiting this market and eating live octopus — so I knew I had to try some myself! Wandering around to find myself some octopus, I noticed I did not see a single tourist, but the market vendors were friendly, if not a bit shy at times. I found the octopus and despite the fact that it was only 7:30am and the tentacles were wiggling around on my plate, I have to admit that it tasted quite good….albeit a bit of a strange sensation!

Gyeongbokgung, known as Gyeongbok Palace, was the main royal palace of the Joseon dynasty, built in 1395. Covering almost 90 acres, as I wandered around the palace grounds I found many local tourists in addition to a much smaller number of foreigners. The most notable structures in the palace that are worth looking at are the main gates, the King’s Quarters, the Queen’s Quarters, the Crown Prince’s and Princesses’ Quarters as well as the Royal Banquet Hall, all with stunningly beautiful painted interiors.

The main attraction for me however was the Royal Guard Changing Ceremony, which takes place multiple times each day (excluding Tuesday) at the main gates. The guards’ uniforms, weapons and accessories as well as the procedure made for quite a colorful display and a great photo opportunity – and I couldn’t help but enjoy watching the frozen guards keeping their stance when local Korean students posed for photos with them.

Jogyesa Temple is the center of Zen Buddhism in Korea and if timed correctly, it is a great place to see large crowds of Korean worshippers praying to the three huge Buddhas housed inside. Along with the three Buddha statues within the grounds is the actual temple Daeungjeon, the largest Buddhist shrine in Seoul. Built in 1938, the design actually followed the late Joseon Dynasty style with stunning murals of scenes from Buddha’s life and incredibly detailed carved floral latticework doors. Unfortunately as it is a place of worship, there are strict rules about taking photos inside, so instead, out of respect, you must stand at the bottom and take them from the outside only.

On both my visits, the exterior of the temple was covered with hundreds of brightly-colored lanterns and hundreds of people, with monks and worshippers chanting and praying. This is a definite must-visit to get an insight into the deep culture of Seoul whilst stepping back in time to appreciate the history of this incredible city.

Bokchom Hanok Village literally translates to “North Village” and feels like you are stepping back in time, catching a glimpse of what Seoul used to be. Home to around 900 hanok (traditional Korean houses), the village has the largest concentration of these authentic Korean homes adorned by distinctly patterned wood walls and stunning tiled roofs with their peaked-style shapes. I chose a gorgeous day and took a stroll around, soaking in the history of the village; once home to high-ranking palace officials, now home to the wealthy – taking note of the city in the distance which now felt like worlds away. Fast becoming a tourist mecca, I still enjoyed my walk through the streets, now dotted with cafes and restaurants, ready for the next tourist to come along

The Seoul Namsan Tower (officially known as the “The N Seoul Tower”) rises above the city of Seoul and at almost 86 feet high, it is visible from nearly everywhere. Predictably, it is a major tourist magnet and there are some big crowds here of both foreigners and locals alike. Most come to enjoy the view, watch one of the performances that take place, have a picnic or even grab an ice cold beverage in The Beer Garden. I would normally skip a place like this but the top of the tower, which is the highest point in Seoul, offers unparalleled views of the city — and I found it actually gave me the best perspective of the various neighborhoods looking across the mesh of old and new, traditional and modern, in this vast metropolis.

For those seeking the best in Korean traditional performances, the place to go is the Korea House. Opened in 1981, Korea House is a traditional building that focuses on the culture and lifestyle of Koreans. Divided into what is called ‘Haerin-gwan’ – meaning a place where people can get to know each other – there is traditional music, traditional food (with a restaurant and also banquets on offer)  and on weekends you can actually watch a traditional wedding and people playing folk games. The Traditional Theater has about 156 seats with various performances taking place, usually twice a day. I was quite pleasantly surprised by the quality of the performers here —  from the live musicians to the dancers, and my guide told me they were the top troupe in Korea.

These sorts of performances are often very touristy (and in fact all those watching were tourists) but the quality made it well worth attending; I watched eight different performances combined in into one large performance that lasts for an hour: these included the O-go-mu, Korean Fan Dance, Arirang Concerto, Seoljanggo, Bicheon, Jinju Gyobang Gutgeori Dance, Sarang-ga Dance, Hallyangmu and Pungmul-nori. This place is definitely a must-visit when in Seoul.

I always find one of the best ways to get to know a place is by visiting the markets, both touristy and local. It’s great to people-watch and survey what is on offer, which lends bit of an understanding of the place you are in; Seoul is certainly no different with many interesting markets on offer.

Namdaemun Market is the oldest and largest traditional market in Korea and is a great place to bargain with the local vendors to purchase pretty much anything you can think of, including clothing, carpets, stationery, toys, kitchenware and even fishing gear! With many restaurants and ginseng shops, I wandered around and made a few purchases and watched the buzz that filled this sprawling hive.

While Namdaemum is very popular, I found it much less interesting than the exotic food markets spread throughout the city, which besides selling an amazing variety of Korean food, are usually a great place to meet locals after work who are drinking Soju or are eating Bibimbap from one of the many street vendors, the most famous of Korean dishes. Bibimbap is a bowl of steamed rice, sautéed vegetables and a fried egg, all mixed up together, it is absolutely delicious and much-loved by the Koreans…and me!

Insa-don, located downtown is another large market area with tons of shopping, restaurants, and galleries dotted along crooked alleyways and is particularly popular with tourists. The area boasts a much more modern feel than Namdaemun, fused with a rather arty-edge with a huge selection of street food, tea shops, and of course shopping.

The Korean Demilitarized Zone is not really in Seoul, of course, but it is a very interesting half-day trip that I highly-recommend — in particular the Joint Security Area, as no visit to Seoul is really complete without it.

Visitors can embark upon half, full day and private tours of the DMZ, all of which must be booked in advance to experience the high electric fences, guards at every turn, and Imjingak Park – which is the location of the  “Unification Bridge”  as well as the United Nations’ DMZ command post, also known as Camp Bonifas. With slideshows and presentations by the US Army, a visit to the Bridge of No Return, DMZ’s theater and exhibition hall and incredible walk down into the infiltration tunnels lined with sharp rocks, the tour comes to an end at the Dora Observatory where you can gaze into binoculars at the North Korean state. My visit to the DMZ was one of most interesting things I enjoyed in Seoul and I highly-recommend it to anyone visiting to get a glimpse of how this vast metropolis came to be.