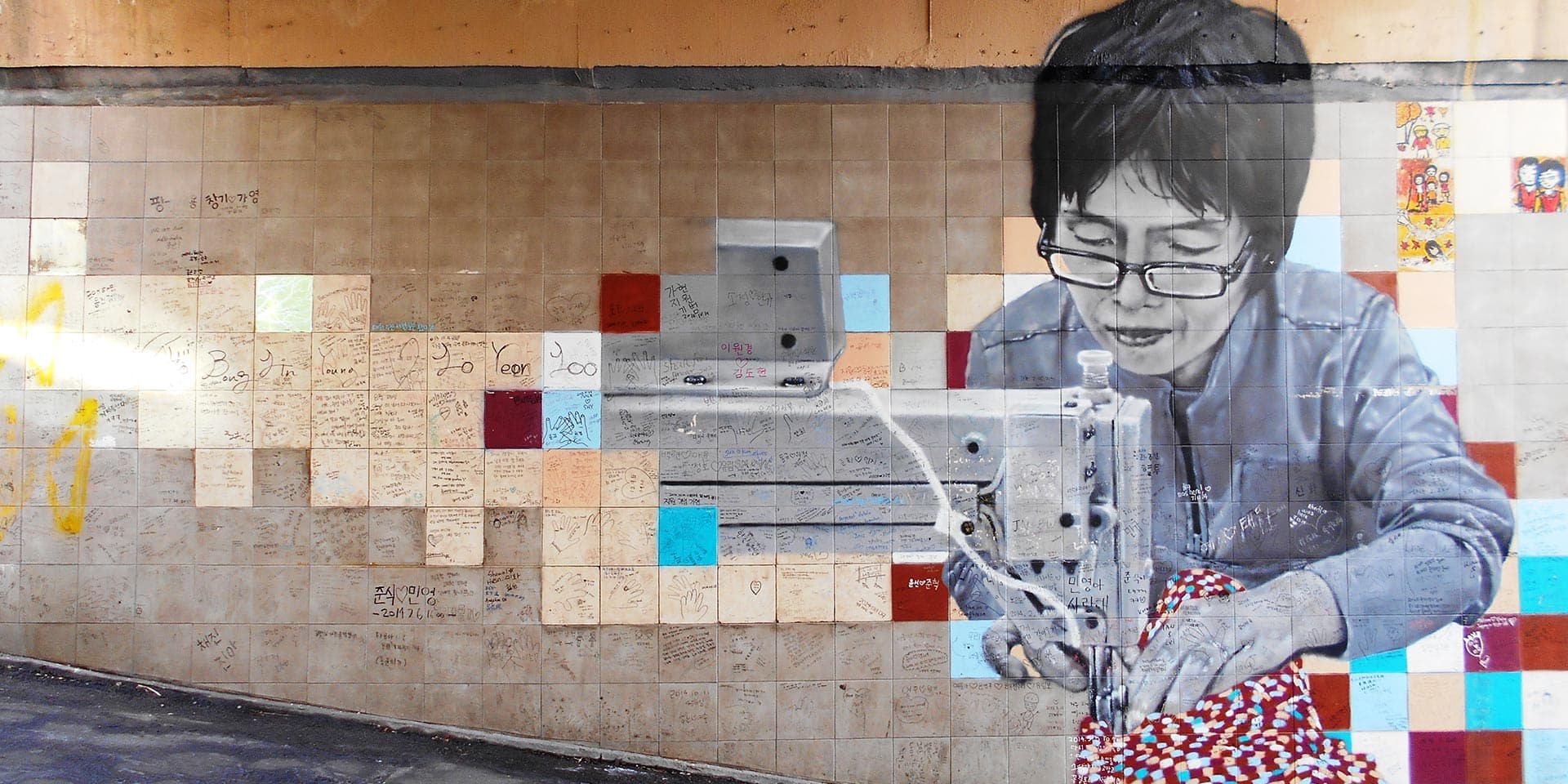 Hong Kong’s Art Basel is in the news and Setouchi is set for three seasons of contemporary art in the Seto Inland Sea, but what about South Korea? Keen art lovers will know that Gwangju’s Biennale is worth a look, but the country’s capital has plenty of boasting to do when it comes to the art world. Whether it’s street art, high art, or a cafe in the sky, art lovers will find themselves very busy in Seoul.

ABOVE: Seoul Museum of Art.

Found in the Gyeonghuigung Palace area, a former royal seat of the Joseon dynasty (1392 – 1897), is the Seoul Museum of Art (SeMA). Centrally located, the museum occupies the old Korean Supreme Court building, which has been remodeled and renovated into a space complete with three floors worth of exhibition halls and spaces below ground for lectures, classes, and offices. SeMA has featured major names from around the world at its exhibition halls, such as Chagall, Matisse, and Picasso.

That said, a great deal of the museum’s works are from local, Korean artists, as are the museum’s two permanent exhibitions: Eternal Narcissist and Regrettable Times. While the former, Eternal Narcissist, pays homage to the famous Korean painter Chun Kyung-ja, who donated 93 of her works to the museum, the latter exhibit is a collection of realist artwork produced during the mid-80s, a period of massive social changes in South Korea.

ABOVE: Images from SeMA.

It should also be noted that the National Museum of Modern and Contemporary Art, Deoksugung, is a short walk from SeMA, and this wonderfully curated museum of two floors and four galleries provides additional candy for the eyes and food for thought. Its current exhibition is over long-overlooked artwork from the Korean Empire (1897 – 1910) period, and it is as informative as it is well executed.

The Ihwa Mural Village is marketed as a “once run-down residential area that was transformed into a picturesque neighborhood,” and there is little fault with this account. The murals may not be huge in scale, but they do add a touch of enchantment to the narrow, stair-laden roads of this neighborhood. As visitors make their way up the steep staircases, there is plenty of interesting architecture to take in, little murals lining the walls that make fitting backdrops for pictures, and an ever-improving view of the city.

ABOVE: Installation in Ihwa Mural Village.

The top of the village offers a sweeping vista of the city, and a section of the remnant city wall – a 600-year-old, surprising well-maintained vestige of the Joseon dynasty – also lines the mountain ridge there. Peeking over the wall reveals another view of the city. Of course, there are a number of little bakeries, coffee shops, and restaurants scattered throughout the area, all of which are just as delicate as the homes they are nestled between.

And since the nearby Hyehwa subway station, which is at the bottom of the hill, is adjacent Seoul National University’s Yongong Campus, a number of other dining options can be found within a short walking distance of the Ihwa Mural Village, including a surprising number of places that promise Chicago-style pizzas.

Completed in July of 1985, 63 Building was the tallest structure outside North America for a time, and though it has since been surpassed, it remains the tallest gold-clad structure in the world. It was the symbol of the 1988 Summer Olympics, and it is occupied by insurance and securities companies. But on its 60th floor, in addition to a view, there is also an art gallery, which happens to be the highest art gallery in the world.

The gallery opened in 2008, and exhibitions range from paintings to photography. The gallery has three exhibition spaces in total, and while the content may vary, the floor-to-ceiling windows wrap around the whole facility, providing panoramic views wherever guests wander. In short, the 62 Sky Art Gallery gives guests the opportunity to kill two birds with one stone, so to speak; that is, having the opportunity to both appreciate art and ogle at the expanse of concrete and glass that is Seoul.

The Dongdaemun Design Plaza, also known as the DDP, is an amalgamation of concrete, aluminum, steel, and stone, brought together to form a distinctively neofuturistic structure. The giant mushroom-like building, which is the work of British-Iraqi architect Zaha Hadid, seems to be floating, and it is largely responsible for Seoul’s designation as a World Design Capital in 2010. Within the facility are a number of spaces used for exhibitions, retail, fashion shows, concerts, and performances.

The exhibitions held here range from art in the traditional sense – of both Korean and international origins – to demonstrations of cutting edge design. In terms of retail, most stores have a design or artistic angle to their products. Think pen shops or a cylindrical wall of cameras that can print out a 3-D replica of guests. Additionally, for the most part the prices at the DDP are kept within a reasonable range. At the end of the day, though, perhaps the best thing DDP has to offer is its iconic architecture, a structure of sleek stainless steel, graceful curves, and intuitive design — a work of art.

Pursue Your Passion: Celebrate the Arts in Five of Asia’s Most Captivating Capitals

With an art museum, design museum, and an opera house that features one Music Hall and two concert halls, the Seoul Arts Center (SAC) is to the arts what a Swiss Army knife is to the pocket knife. Likely the biggest attraction it has to offer is its Opera House, which is designed to resemble a tradition Korean bamboo hat, called a gat. The Opera House hosts classical music concerts, classical ballet performances, and modern musicals as well. For example, The Lion King is currently being shown in the Opera Theater.

In terms of visual art, the complex hosts the Hangaram Art Museum, Hangaram Design Museum, and Seoul Calligraphy Art Museum. The art museum contains exhibitions of primarily contemporary works from artists both Korean and foreign. Current exhibitions include the works of Spanish artist Eva Armisen and a tribute to John Lennon. In total, the art museum has six exhibition halls worth of artwork.

The design museum has three exhibition halls across three floors, and the calligraphy museum has five exhibition halls. There are a number of shopping and dining facilities within the complex, both western and Korean, and even more options nearby. It is true that the SAC is a bit difficult to get to, as it is in the south of the city, far from most tourist sites. But the number of different activities it offers in a single place makes it well worth a visit, at least for fans of the arts.