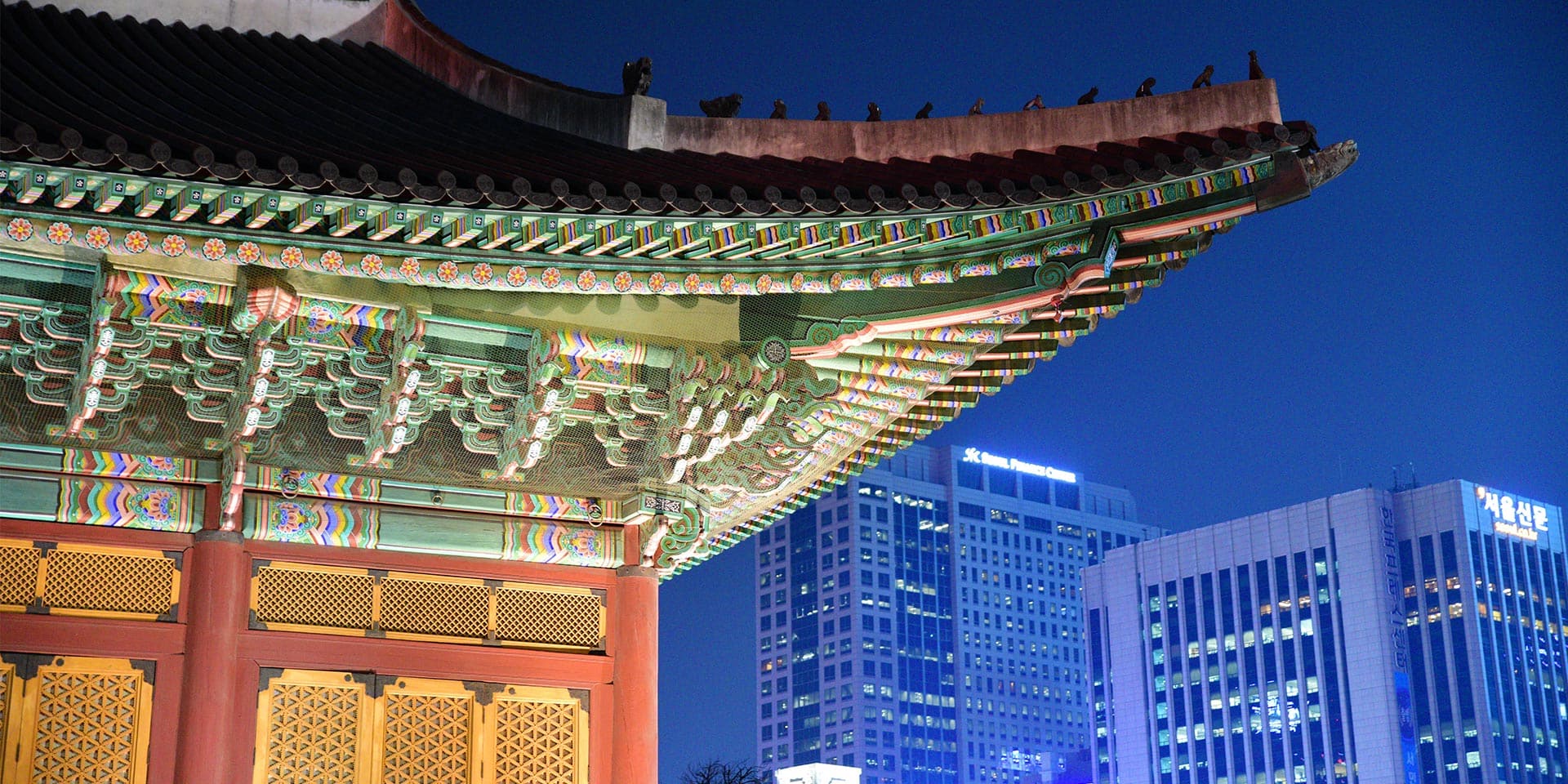 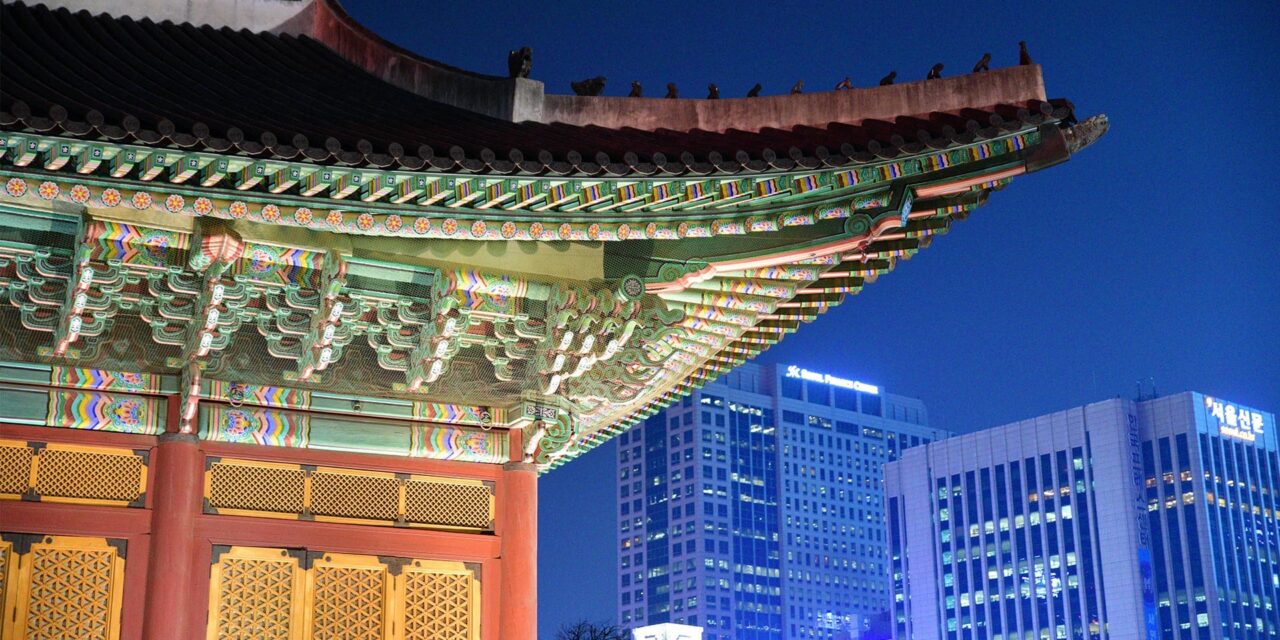 I am in the downtown area of one of the world’s biggest cities, a hyper-modern metropolis spiked by steel-and-glass skyscrapers. Yet right now my surroundings give the impression that I’m not just in a completely different location but in another era. I’m sit on the weathered steps of a 14th century palace looking up at a pristine, mountainous national park that looms over a sprawling royal complex: Gyeongbokgung Palace.

Seoul is unique in that it has not one, or even two palaces, but five former royal complexes, all located in the city center. It is also unique in that it has a cutting edge central business district that stops dead right where these palaces start, with the nearby Bukhansan National Park towering above both. Five palaces, five adventures.

The largest of the five palaces, Gyeongbokgung, looms large at the northern end of Sejong-daero, one of the busiest thoroughfares in downtown Seoul. Its dual-tiered main gate, Gwanghwamun, is the main public entrance to this palace, which was built in 1395 as the base for the Kings of the Joseon Dynasty, Korea’s longest-lived dynasty. The Kings used this enormous complex, which featured hundreds of rooms, for almost two centuries until Gyeongbokgung was razed during the Japanese invasion of Korea in the late 1500s.

Gyeongbokgung then went unused for more than 200 years and was not fully restored until the second half of the 19th century during the reign of King Gojong. Again in the early 1900s this walled complex was badly damaged by the Japanese, before being painstakingly restored once more to its current impressive condition. Gyeonghoeru Pavilion and Hyangwonjeong Pond are two of the key features of the palace, which now is also the base for the National Folk Museum and the National Palace Museum of Korea.

ABOVE: The 15th century Changdeokgung Palace.

Built in the 15th century, this 58-hectare palace complex located just over 1km east of Gyeongbokgung was used as the secondary palace of the Joseon Dynasty for about 200 years until it, too, was destroyed during the Imjin War (1592-1598). The complex consisted of dozens of administrative buildings and residences scattered across a meticulously-landscaped site which featured decorative gardens designed to match the rough topography of the land. The result is what UNESCO describes as an “exceptional example of Far Eastern palace architecture and design, blending harmoniously with the surrounding landscape”.

The design of Changdeokgung was intended to adhere to the principles of Pungsu-Jiri, which was essentially the Korean version of Feng Shui. To create harmonic energy throughout the complex the palace buildings were constructed at the southern end of the site, with a large garden behind them. Called the Secret Garden it featured hundreds species of trees and plants. Among the buildings were three courts, each made from wood with tiled hipped roofs. Its balance between nature and human made structures became a template for major buildings across Korea.

ABOVE: Panoramic view of the Changgyeonggung Palace.

Adjoining Changdeokgung, this palace was built in the mid-15th century as a home for the father of King Sejong. Later in that century it was renamed Changgyeonggung Palace and extensively renovated by King Seonggjong. Each of the five palaces has certain consistencies in layout and construction. All of them had an inner sanctum home to royalty, as well as an outer area which consisted of official buildings like halls and offices which hosted royal events and ceremonies.

The largest building inside this palace is the former Queen’s residence, Tongmyeongjeon, with its other key structures being the grand Honghwa Gate and the pretty Okcheongyo Bridge. This bridge arches over a beautifully-designed pond, creating one of the most peaceful and aesthetically-pleasing locations inside the palace. Changgyeonggung has been restored over several decades after being repurposed as a botanical garden during Korea’s period of Japanese rule (1910 to 1945).

ABOVE: Deoksugung detailing. This palace is found in the heart of downtown Seoul.

Smaller in size than the aforementioned palaces to its north, Deoksugung is the only one of the five palaces which is surrounded by modern buildings. Nestled in the heart of Seoul’s CBD, there is a spectacular contrast between the heritage architecture of this palace and the cutting edge designs around the complex. It looks particularly striking at night time when both the palace and the skyscrapers around it are brightly lit.

ABOVE: Originally built as a residence for the older brother of King Seongjong, this night scene from Deoksugung features the towering Seoul skyline beyond.

One thing which immediately sets apart Korean palaces from others in East Asia is the use of the color scheme called Dancheong, which is made up of the colors red, yellow, blue, white and black. These hues, along with green, are used liberally on the facades and interiors of all of Seoul’s five palaces, giving them a vibrant appearance. Originally built as a residence for the older brother of King Seongjong in the second half of the 15th century, Deoksugung has a cobble stone road which connects its main buildings,

ABOVE: Gyeonghuigung hallway in Seoul.

The newest of the five palaces, Gyeonghuigung was built in the 17th century as a secondary residence for the King, who relocated there only amid crises. Originally, it was a large complex which was connected by a bridge to Deoksugung to its south.

There were almost 100 structures across this complex, including two large halls where the King received guests as well as another two big buildings which were residential quarters. But many of these buildings were either demolished or relocated during the period of Japanese occupation in the first half of the 20th century.

These days Gyeonghuigung is a small complex with only a handful of well-maintained buildings remaining. Because of its size and its less central location, it receives far fewer visitors than the other four palaces, based on my experience of having visited them all repeatedly. This is a great selling point of Gyeonghuigung, which is much more peaceful than its fellow palaces.