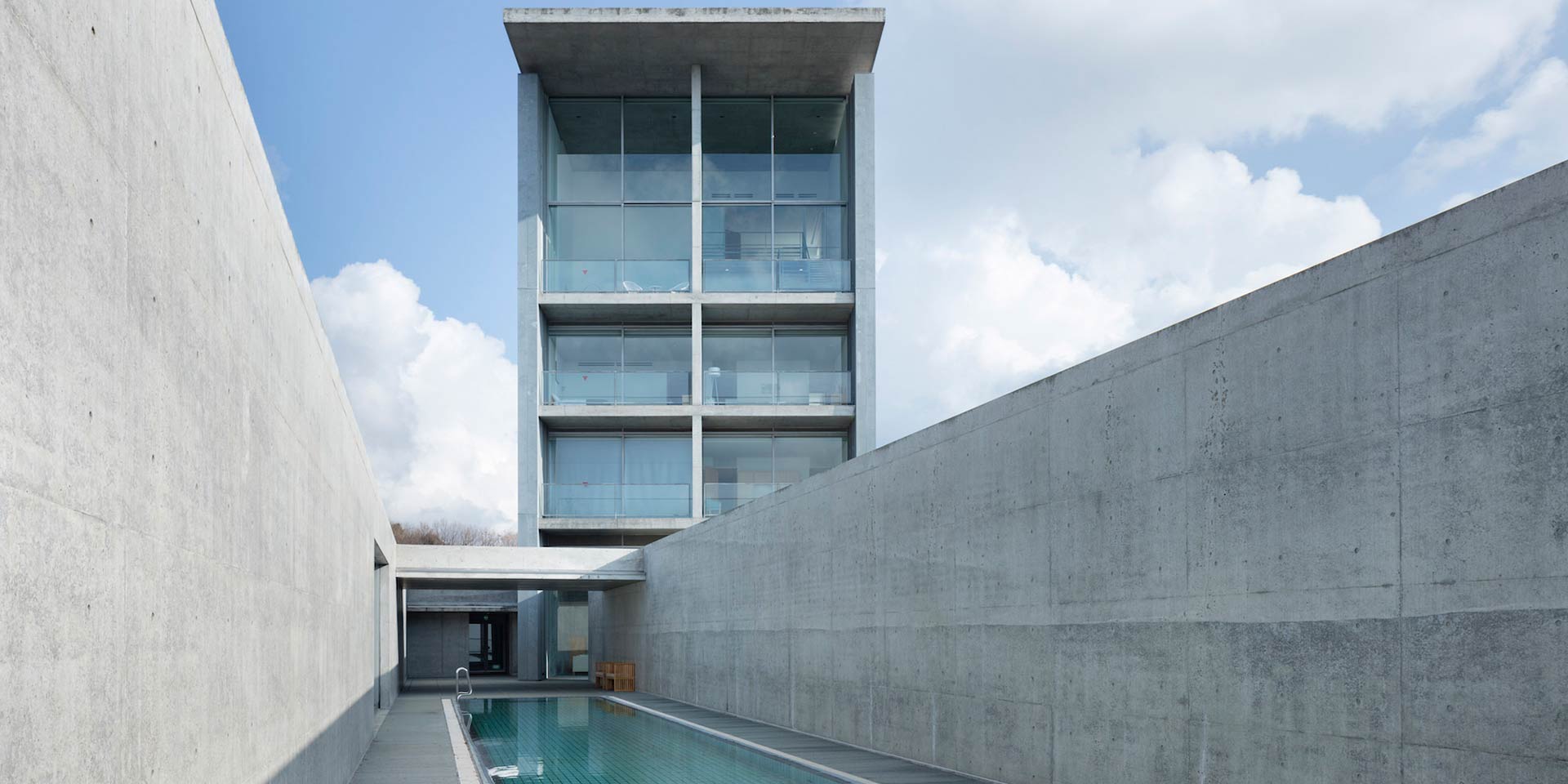 Setouchi Aonagi is one of the most extraordinary hotels I have ever stayed in, and I have stayed in a lot of hotels. The property is incomparable, but if I had to make some sort of comparison, I would say it is like an Aman – probably Amanemu in Shima which is also coastal – meets Benesse House in Naoshima – the exclusivity and impeccable service of an Aman in a museum-cum-hotel designed by Starchitect Tadao Ando, with world-class art on the walls by the likes of Frank Stella and Rieko Kawabe.

Aonagi, as it is called since Setouchi just refers to the area it is in on the Setouchi Inland Sea in northwest Shikoku, was built as a museum in 1998 on a remote mountaintop with sea views in the distance.

My idol Tadao Ando designed the original museum, and also oversaw the recent conversion to its current state as a 7 suite luxury hotel. Each suite is massive, and ranges from the below-ground garden suite which looks out on a lovely private garden, to the duplex Aonagi Suite with a huge balcony and sweeping water views.

With only 7 suites, numerous staff and a significant price tag, one would expect superb service and they would not be disappointed. Besides all the excellent Japanese staff, there is also a young Taiwanese man who lived in Las Vegas and worked at Aria and speaks excellent English as well as Japanese.

The dining room looks out at a stunning waterfall and fountain that Ando designed, and as he intended it, it is a work of art on its own in his usual minimalist way. Many of his works feature “water as art” including his Komyoji Buddhist temple in Saijo that appears to float on water and the main hall of Buddhist temple Homoukuji on Awaji Island, both of which I also visited on this trip. My other architect idol Noguchi also combined nature with art and “water as art” was one of his themes. His art park Moerenuma Park Near Sapporo in Hokkaido has a great example.

Aonagi’s food is spectacular. Both the kaiseki dinner (around 12 courses) and the delicious Japanese breakfast which appears enormous with so many tiny dishes, but you don’t feel stuffed afterward. They completely adapt to your own specific wishes so my admittedly embarrassing wishes of no red meat and no carbs and no tempura was beautifully followed. I feel like a jerk for being so difficult, but the Japanese don’t seem to mind at all, and aim to please. They succeed!

Ando designed an incredibly cool outdoor swimming pool as well as a big indoor pool and onsen that you can book privately for an hour so you can swim in the pool naked and use the onsen. Beyond the gorgeous retreat of Setouchi Aonagi, perched on its mountainous vantage point overlooking the Seto Inland sea, lies greater Matsuyama and its scenic surroundings. The capital city of Ehime Prefecture and the largest city on Shikoku, there is plenty to recommend in the town for guests venturing out of the hotel for a little exploration.

Those who, like me, cannot get enough of Tadao Ando’s work, should direct themselves to the Sakanoue No Kumo Museum, inspired by the novel of the same name, written by Ryōtarō Shiba. This outdoor museum experience was designed by the architect as a circuit-style exhibit, around which you tour to discover the events and characters of this Meiji-era epic tale of two ambitious brothers.

More beautiful Japanese architecture awaits those with a penchant for the historic and aesthetic. Matsuyama Castle was originally built by Kato Yoshiaki in 1603, on a steep hill in the city center, but was damaged by a lightning strike in 1784. The current five-story castle tower (known in Japanese as a tenshu) was built between 1820 and 1854, and has since stood through the Meiji restoration and bombings in the Second World War.

You can ride the chairlift up to the castle to explore and wander its picturesque gardens, carpeted with cherry blossom. Also in Matsuyama is beautiful Bansuisou Villa, built in 1922 by Sadakoto Hisamatsu, the son of the region’s governor. Besides admiring its elegant French-style facade, take some time to explore within. Since 1979 it has acted as an art museum, with a number of works by artists from Aichi Prefecture. To the north of the hotel is the coastal town of Imabari, with its 15th-century castle – one of three Mizujiro, or “Castles on the sea”. This impressive fortress is surrounded by a wide seawater moat and a formidable stone wall. The iron-plated Kurogane Main Gate, flanked by towering turrets, is typical of the Edo period.

For a combination of history and relaxation, Dogo Onsen Honkan in Matsuyama is unmissable. Said to boast a 3,000-year history, it is perhaps the oldest spa in Japan. According to legend, its mineral waters have miraculous properties, and once healed the ailments of a deity. The magnificent three-story wooden bathhouse, with its watchtower and red glass windows, looks like a castle, and bears a striking resemblance to the bathhouse of gods featured in Hayao Miyazaki’s animated movie, “Spirited Away”. Venture in to take a traditional bath, soaking up all the health-giving benefits, and then relax in the peaceful tatami salons with a pot of refreshing tea.

Finally, explore Matsuyama’s historic Ishiteji Temple, a national treasure thought to have been first built in the year 728, at the request of the Emperor Shomu. Additions have been made to the ancient building over the years by visiting monks; and the temple gate, with its Deva King images, was built in 1318.