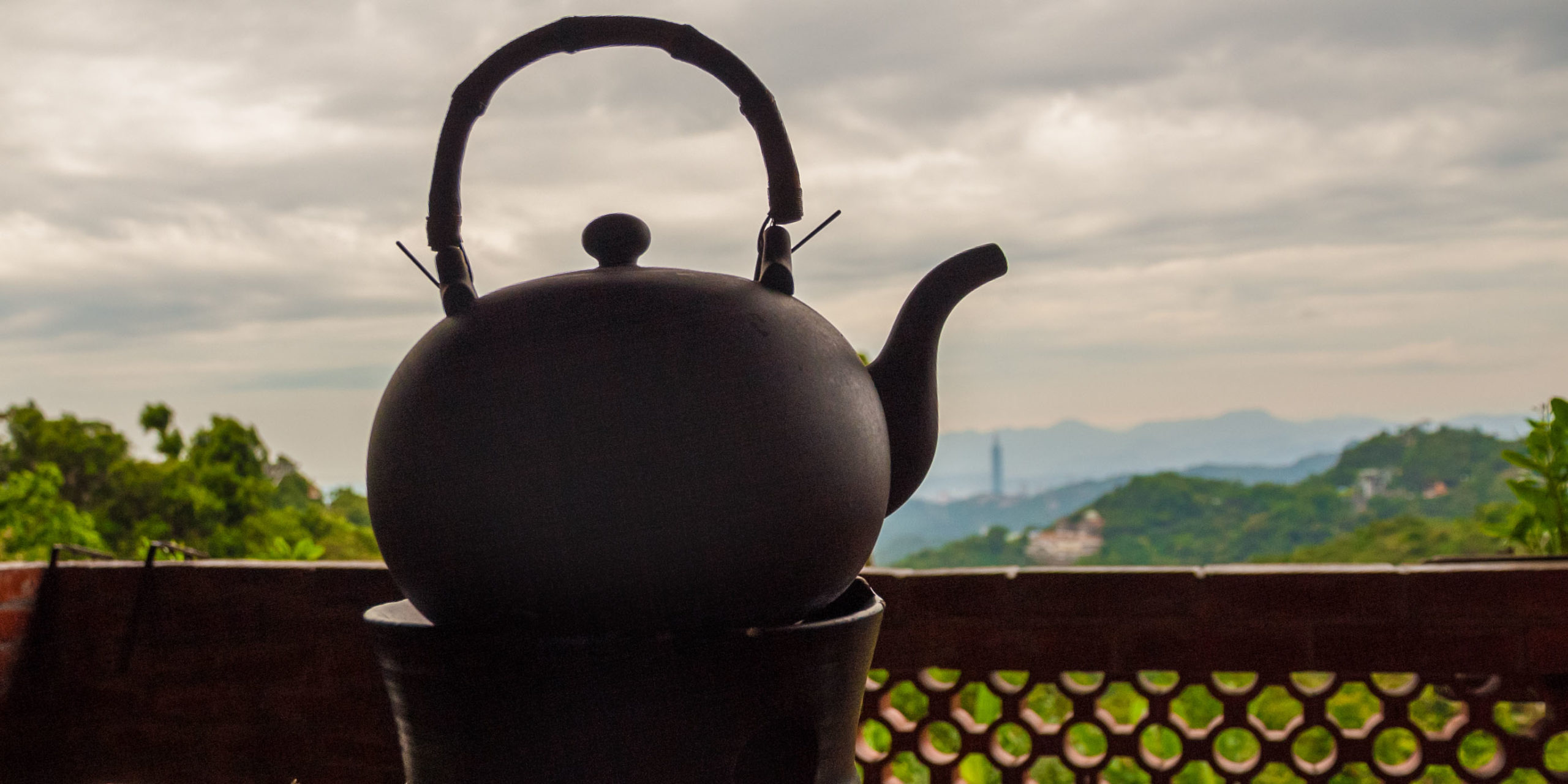 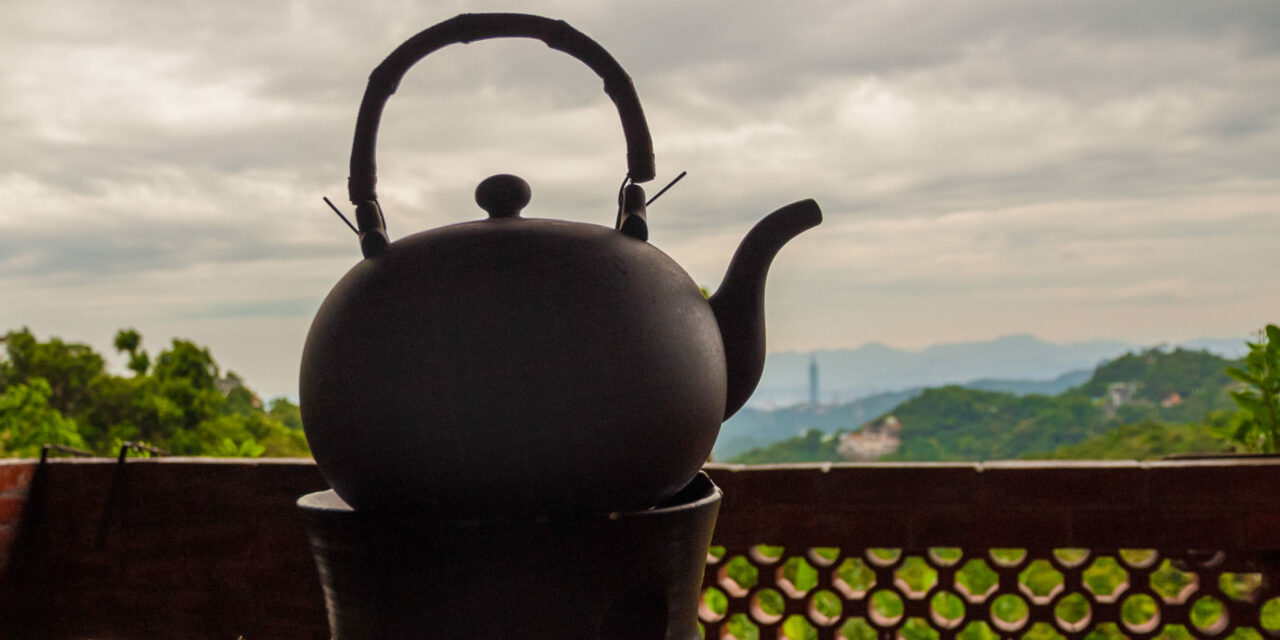 Whether Taipei’s Maokong is a quiet place to enjoy a cup Taiwan’s famous tieguanyin tea or an overly-accessible carnival for tourists depends on just how far you are willing to walk.

Disembarking from the 4.2 kilometer gondola which connects the mountainside village with the Taipei Zoo and the local metro, we joined the throngs of tourists nibbling on peanut-brittle ice cream burritos and squid-sticks and contemplated our first fork in the road. I am momentarily distracted when my companion suggests to me that “fork in the road” is a culturally unsuitable metaphor and instead proposes that I call it “the place where the disposable chopsticks split.” I propose that I need a new travel companion.

ABOVE: Maokong Gondola above Taipei.

Ultimately, we head in the direction of something called the “Taipei Tea Promotion Center for Tie Guanyin Tea and Baozhong Tea.” Maokong’s tea is celebrated in Northern Taiwan, and the Tea Promotion Center seems like as good a place as any to start. It doesn’t take a very long walk down the road to leave behind us the food stalls and crowds.

Tieguanyin, sometimes over translated as “Iron Goddess of Mercy” tea, originated in Anxi, Fujian Province, an area long celebrated by poets and connoisseurs for the quality of its Oolong tea. Of the many varieties of Oolong produced in Fujian, Anxi’s Tieguanyin is easily the most famous.

The story of how this revered product of the mainland wound up on Taiwan is, like most cross-straits stories, intimately linked with the settlement of the island by hardy bands of immigrants from the mainland. The Qing Empire conquered the island in 1683 and administered Taiwan as a prefecture of Fujian until 1887 when Taiwan became its own province.

ABOVE: City view from the Maokong Gondola.

Taiwan’s provincial status was brief, however, and the island became a spoil of war between competing empires when the Japanese claimed Taiwan following the Sino-Japanese War of 1894-1895. Despite the island’s contested status, continuing waves of pioneers from Fujian Province found their way to Taiwan. It was a tough place to make a living, a frontier society which had more in common with “Pirates of the Caribbean” than the refined tea growing regions of China.

Zhang Naimiao grew up in one of these frontier families. In 1895, about the same time the Japanese were establishing colonial rule over Taiwan, Zhang took a trip to his family’s ancestral home in Fujian. He was impressed with the quality of the tea produced in Anxi, and when he returned to Taiwan began to cultivate and manufacture Tieguanyin using methods and seedlings he obtained from his sojourn to the mainland. The process matters. Tieguanyin tea is heavily oxidized using a specific technique of rolling and roasting which creates a rich and mellow flavor with floral hints prized by tea aficionados.

As in earlier eras, imperial conflict continued to shape the tea industry in the region. Japanese industrial and commercial practices opened up new markets in Japan and imported machinery mechanized production. But the Japanese colonial government had their own priorities, and the hills around Taipei in the 20th century were developed for coal mining, the production of indigo and camphor and, as World War II turned against the Japanese, increasingly for the production of rice and other food.

After the Japanese surrender, the area slowly began to be reclaimed for tea and, increasingly, tourism. The old tea trails were converted into paved roads and well-maintained hiking paths. During the early decades of the Republic of China on Taiwan, Maokong was a popular getaway for Taipei residents looking to escape the bustle of a rapidly developing city.

Across from the Tea Promotion Center, a hiking trail descends a set of steps and into the forest. Labeled optimistically (or perhaps threateningly) as the “Healthy Hiking Trail,” we take a picture of the posted map and head off into the woods. The trail winds through dense trees which provide much-needed shade as the sun rises overhead.

At each clearing as the remnants of the old tea trade: carefully planted rows of Camellia sinensis soak in the noonday sun.

ABOVE: Path through the Maokong tea fields.

At these clearings, we enjoy views across the valley to the lush hillsides which surround the Taipei basin. Tea is not the only thing which grows well here, and the trail is something of a horticulturist’s (and entomologist’s) dream.

This is not wilderness, but the hike is long enough – and steep enough – to give the feeling of being out in nature. Wax apples, ferns, myriad species of butterflies and their caterpillars, and the obligatory bamboo groves add to the effect.

ABOVE: Spider found on the trail.

A turn takes us out into a more settled area, where a solitary statue of Generalissimo Chiang Kai-shek, who ruled the island from 1949 until his death in 1975, sits amidst the tea plants. Chiang’s paternalistic semi-smile – imagine the Mona Lisa cast as the face of authoritarian overreach – gazes out into a field filled with the buzzing of insects and the calls of barbets and other local birds.

ABOVE: Tea set in the Maokong tea fields.

After about 90 minutes of hiking, we reach our destination. A river descends through a small notch with oddly symmetrical holes carved in the soft rock of the streambed. A wobbly rope bridge crosses the river and gives a good view of these “Pot Holes,” so named because they seem just the right size and shape to hold a teapot.

We head up to the road and turn back toward the gondola station. It is now later in the day, and the carnival in front of the gondola exit is in full swing even for a weekday. Crowds of Chinese tourists pose for pictures at the first vista they can find. Their high heels and polyester pants suggest that they will not be taking the trail we just ascended. European and North American tourists cluster together, artfully herded toward the tea shops by eager English-speaking Taipei tour guides.

Making our way up the road from the Gondola Station, we pass a seemingly endless array of tea houses and restaurants. This is where having a guide might have paid off. We chose one establishment more or less at random and were not disappointed. The sanbeiji (“Three Cups Chicken”) at the Longmen Restaurant was very good and the tieguanyin prepared at our table done well. We enjoyed lunch with a view overlooking Taipei and made the inevitable purchase of some of the local tea leaves to bring back as souvenirs.

The Maokong Gondola is dangerously convenient to the city. Take the Wenshan-Neihu Line of Taipei Metro to the Taipei Zoo Station and then walk to the Maokong Gondola Taipei Zoo Station. The gondola makes a few stops on the way up and back (Chinan Temple, the last stop before Maokong, is worth checking out!). Several of the gondola cars are “Crystal Cars” featuring glass bottom views of the countryside as you ascend. While the cost is the same, there are proportionally fewer of the glass bottom cars, and the line for the regular cars moves a lot quicker. The Longmen Restaurant is about a 10-minute walk from the gondola station, southwest and right when exiting the station.

Those wishing for more of a meditative experience should try and plan your visit for the weekdays as we were told the weekend crowds could sometimes be overwhelming, especially at the better tea houses and restaurants. There are also many operators in Taipei which offer daylong tours of Maokong and the surrounding area.