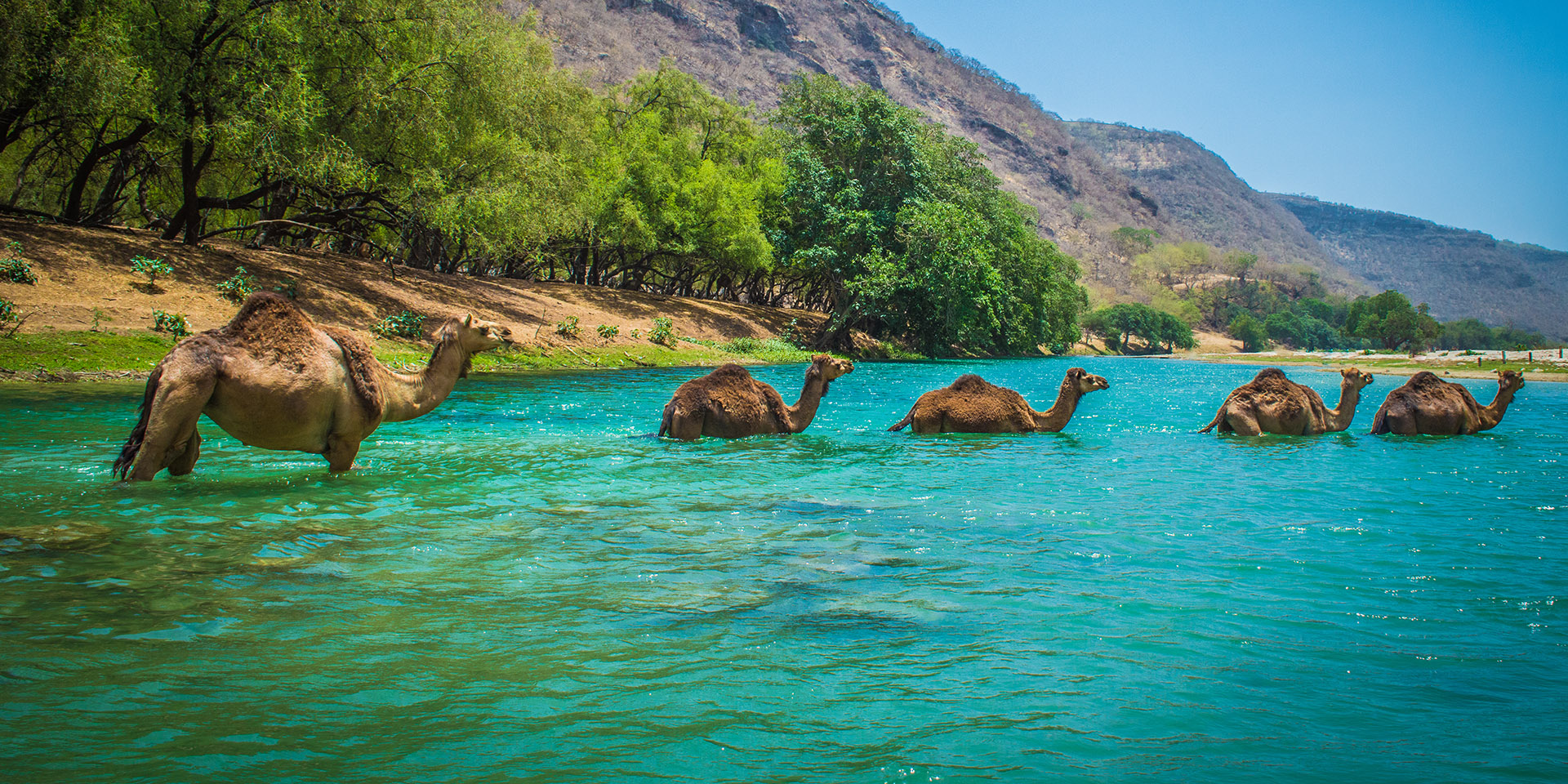 You’ll want to visit Salalah for Khareef, the wet season, when this desert turns green. The dry, brown slopes come alive with nature, camels, waterfalls, and all manner of outdoor activities. For a few months of the year, this desert gets turned into the Garden of Eden, and there’s a lot you won’t want to miss – from the tombs of prophets of the past to camels wandering beaches that rival the beauty of Southeast Asia.

Khareef means autumn in Arabic, but refers to the dense fog and monsoon clouds from India that cover Salalah, the capital of the Dhofar region, from late June to late September. During these months, the brown countryside is completely transformed into a green, subtropical city.

The mountains behind Salalah collect moisture and nourish the frankincense trees that produce the incense sold in markets around the world. The region celebrates with a large festival on Ittin Road. Arab families from across the region gather to enjoy restaurants, clothes stalls, and small stands selling shawarma and kebabs.

ABOVE: Promotional video from Al Baleed Resort Salalah by Anantara.

With both a private beach and a freshwater lagoon, Salalah’s most luxurious resort is a unique haven during the Khareef.

With a design that invokes Oman’s coastal fortresses, the green garden walkways compliment the greening of the region. This opulent resort features 136 rooms, villas, and pool villas along with a private 250-meter beach and infinity pool. Adding to the desert magic is the scent of frankincense.

The dining at the Al Baleed Resort is the finest in the region. Lovers of international fair will want to opt for Sakalan, Southeast Asian can be had at Mekong, and Mediterranean fare is found at Al Mina. However, one of the more unique facets of the resort is the “Dining by Design” spectacle: an entirely bespoke dining experience alone on an empty beach or the garden.

Spa lovers can avail themselves of the resort’s five tastefully designed treatment rooms for Ayurveda treatments and Thai massage. Of particular interest given the location and setting is the Frankencense Ritual, a four-hand synchronized massage with frankincense oil from Salalah.

Camels at the Beach

Dhow You Believe in Magic?

Travelers are likely to have to stop for wandering camels while traveling on the road, the white sand beaches, mountain slopes, and wadis, as tens of thousands of camels travel down the mountains during the Khareef to graze.

The beaches of Oman are some of the most underrated in Asia. They’re clean, cared for, and there’s plenty of space. The limestone cliffs of Mughsail beach are the most obvious choice for a beach adventure with spectacular scenery. Al Fazayah is touted as one of the best for its isolation, but travelers don’t need to go far to find a beach worth laying on in Oman. It can be a little crowded at times, but the famed Al Haffa beach and its palm trees are still worth a look.

ABOVE: Camels on a deserted beach with a 4×4 near Salalah.

The 4×4 SUV has – for the most part – replaced the camel as a mode of transportation. If you’re wondering why there are camels knocking about on your isolated beach, it’s because some camels are fed sardines and bred for milk, others are destined for the dinner table. The meat of young, grass-fed camels is very tender. Travelers can sample this Dhofar specialty at roadside, open-air restaurants. Preparation options include: smoked, grilled, boiled, stewed, or cooked in a chili sauce.

ABOVE: The supposed Tomb of Job.

The Prophet Job, it was said, was the greatest of all of the children of the east, and Oman lays claim to his tomb (and so do a few others). Probably the most important site in Dhofar, the land of Uz, Job’s home, would be modern-day Oman.

The tomb is around 19 miles northwest of Salalah. It’s a must-see during the Khareef for the view over the Salalah plain, as it sits on an isolated hilltop known as Jabal Al Qar. The compound is surrounded by a circular wall and includes the shrine containing the tomb as well as a mosque. Frankincense is brought daily.

The mosque is simple: the roof is flat and low, and contains a minaret, a tall slender tower and a balcony. The shrine, the size of a house, is even smaller. A dome covers the center, and beneath it, a rectangular opening in the floor houses the tomb – a mound of dirt draped in cloth. A nearby carpet conceals a footprint said to belong to Job.