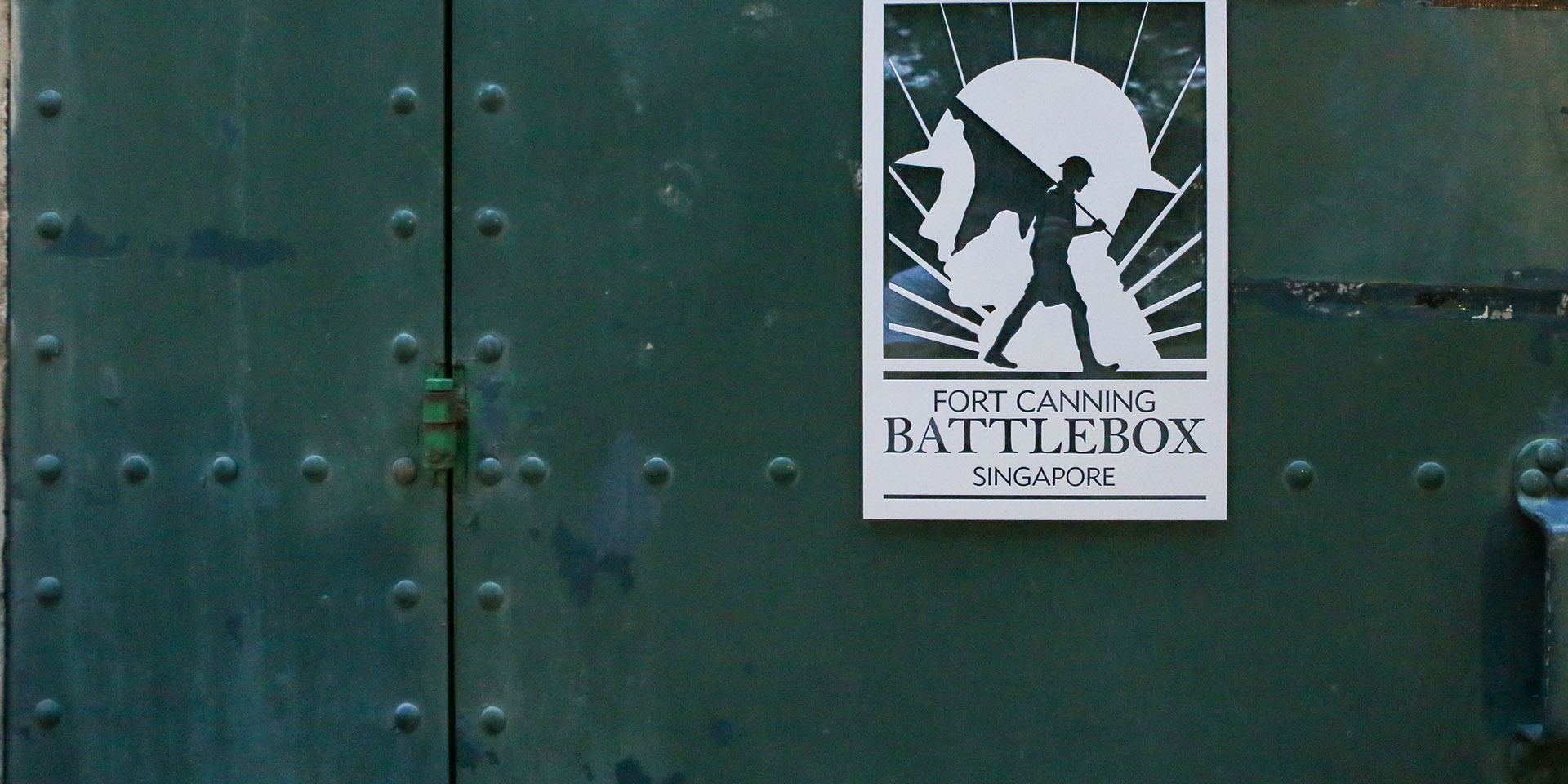 Today marks the day that the British surrendered to Japanese forces in Singapore. The Lion City was thought impregnable, a stronghold where the British would stop the Japanese advance in the Eastern Theater. When it fell, it was considered the worst capitulation in British military history.

Fort Canning Park is well-known in Singapore, a park featuring a Gothic gate and Old Married Soldiers Quarters. However, it is in the stolid, industrial surroundings of the Battlebox – once forgotten for decades – that travelers can re-imagine the British surrender.

ABOVE: The entrance to the Battlebox.

Lens on Singapore: A Photographer’s Guide

“The Battlebox is a former WWII British underground command center inside Fort Canning Hill in the heart of Singapore City,” Rong En Foo, marketing and communications executive at Journeys Heritage Tours & Travel Services, tells Travelogues. “It was part of the headquarters of Malaya Command, the army which defended Malaya and Singapore in WWII. It was inside the Battlebox that the British decided to surrender Singapore to the invading Japanese on February 15, 1942.”

There are many commemorations to the battle for Singapore, but none more apt in central Singapore than the Battlebox. It’s one of the most popular museums in Singapore, which is surprising considering that for decades it was simply ignored.

Today, the Battlebox is a tourist attraction managed by the Singapore History Consultants, a Singapore-based firm set up in 1995 specializing in heritage education and research consultancy services. It was voted the #1 museum in Singapore for 2017 by TripAdvisor for its annual Travellers’ Choice Award.

Curated by the Singapore History Consultants, today the site is central for travelers hoping to get a better understanding of war-era Singapore’s historical importance.

On February 8th 1942, the Japanese invaded Singapore from Johor, and Malaya Command in retreat moved to the Battlebox bunker just three days later. Located 30 feet beneath the hill, the complex included telephone switchboards, signal rooms, sleeping quarters, and a cipher room – even an air filtration system to protect from possible gas attacks.

From this tiny underground lair, the British would run what remained of their battle for four tortuous days.

Seventy-six years ago, the fall of Singapore dominated the news. The mighty British Empire was routed, and when Lieutenant General Arthur Ernest Percival, General Officer of Malaya Command, signed the surrender at 6:10pm on this day, the Japanese took a city of more than one million and an army of 120,000 soldiers.

The battle was preceded by 70 days of intense fighting from the British, Australian, and Indian Army, and the final surrender of Singapore opened a dark chapter in Singapore’s history.

ABOVE: Signal office in the Battlebox.

The British surrendered and the Japanese occupied the complex up until their own surrender in 1945. The British handed over Fort Canning Hill to the Singapore Armed Forces in the late 60s, and then, amazingly, the location of this war-era relic was lost. The doors were locked, and a military complex was forgotten in downtown Singapore.

ABOVE: Exhibit in the telephone exchange room. Special promotions for tours of the Battlebox are featured (check availability) through February.

It wasn’t until 1988 that Straits Times journalist Romen Bose rediscovered the Battlebox, according to the Singapore History Consultants.

History had not entirely preserved the Battlebox; some looting had taken place – perhaps looking for treasure buried by the Japanese before their departure. But, for the most part, a piece of history was reopened with those doors in Fort Canning Park, doors that opened onto a very different Singapore – one of bright lights and Marina Bay Sands.