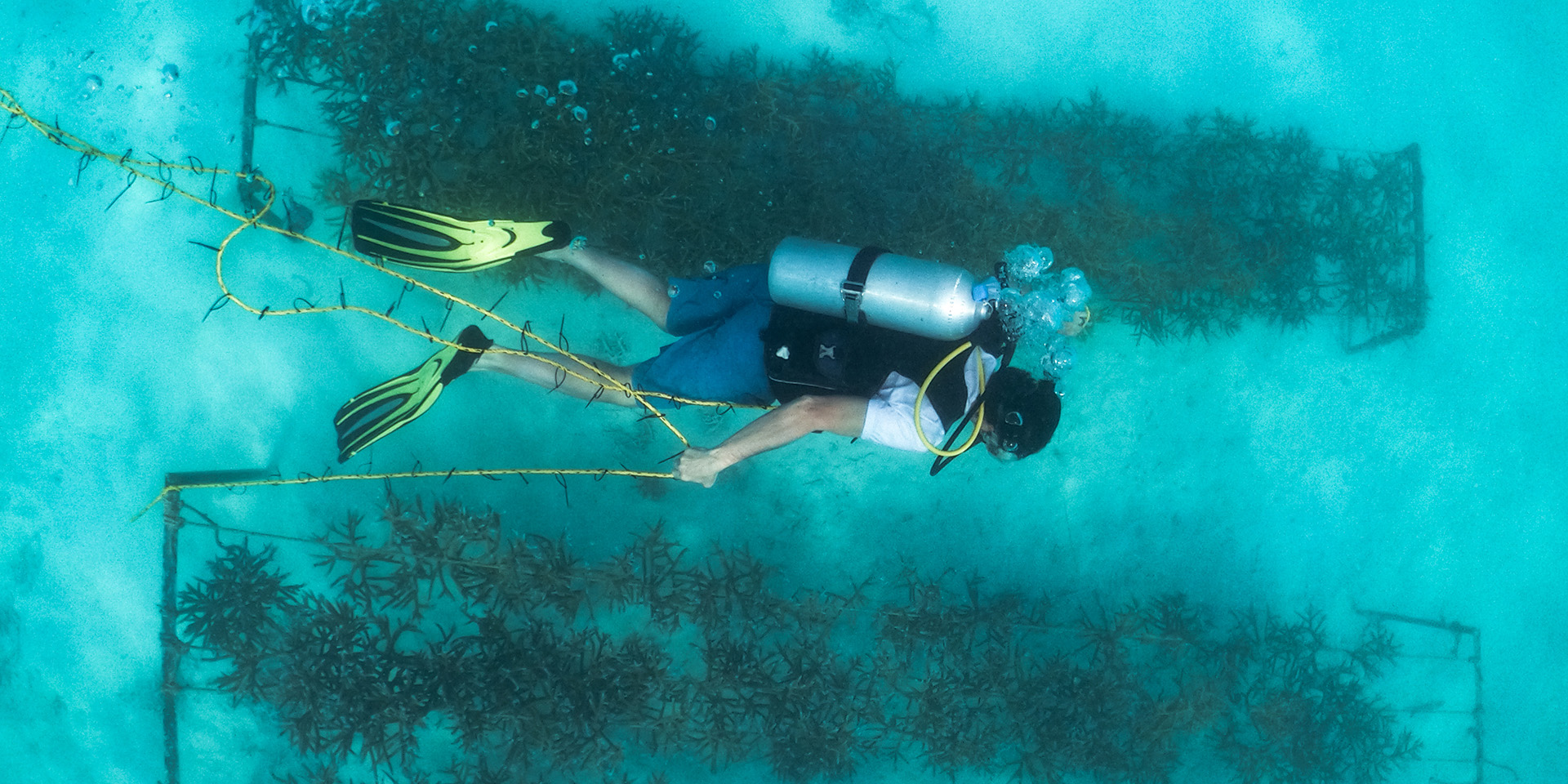 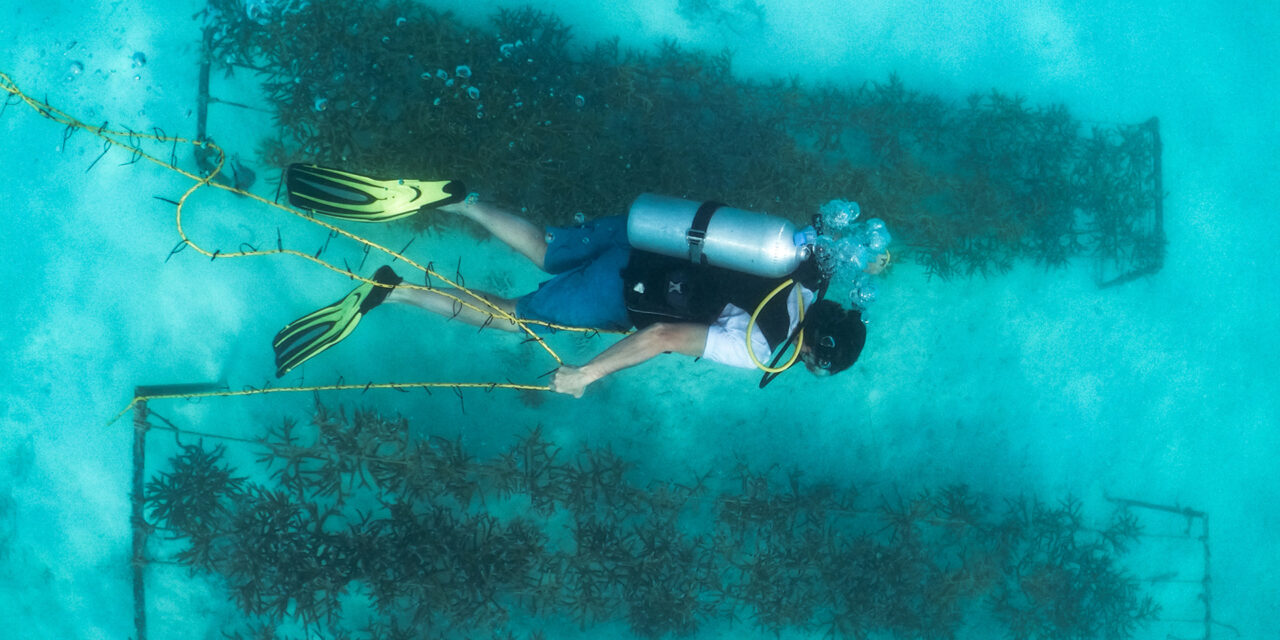 Every visitor’s first aerial glimpse of the Maldives makes a big deposit in their memory banks. Coral reefs may be the cornerstones of many a tropical nations’ revenue streams, but in the Maldives they are the very building blocks of life; this is part of what gives the tiny country such a huge allure for underwater explorers.

“I remember seeing this cuttlefish, a large mollusk with tentacles that’s related to squid and octopus, which is also something of a chameleon when it comes to changing colors,” says Jarod Davis, a veteran diver and repeat visitor to the Maldives. “We saw it keep going down to this hard coral and putting its tentacles under there. At first, I thought it was feeding, but no, the cuttlefish was actually laying eggs.”

To immerse oneself a little deeper in this element, the Maldives offers a wealth of maritime experiences; the five-star Anantaras even offer an adoption option. Anantara’s coral restoration work in the Maldives is part of the Holistic Approach to Reef Protection, a long term study designed and implemented by the not-for-profit organisation Coral Reef CPR.

Travel the Maldives with Remote Lands

For resorts across the tropical world, it’s common enough to have scuba schools on-site, but having a marine scientist on staff is a rarity. At the Anantara Kihavah, Flora Blackett plays that part. With a master’s degree in Wildlife Project Management from a British university, she has worked in different undersea environments all over the world.

“We are incredibly lucky because our reef runs around the entire island, only 30 meters from the beach. It’s not only an amazing reef to snorkel – it’s a fantastic dive site, aptly named Yellow Wall, as it’s covered in the most stunning yellow soft corals,” says Flora.

She also oversees one of the resort’s most innovative projects: the coral nursery and adoption program. “This is a program that any guests can get involved with and not just take away fantastic holiday memories but leave a lasting legacy to return to as well,” she said.

ABOVE: Caring for coral at Anantara Dhigu.

Flora gathers broken pieces of coral from the house reef, cleans the dead tissue from them, and pares them down to the correct size. When the guests arrive, Flora gives them a lecture about coral’s importance as a nurturer and protector of sea life before showing them how to attach the prepared fragments to a rope using cable ties.

Once they are in a place, the group snorkels out to one of the resort’s three nurseries to watch as she secures the rope and puts a plaque with the guests’ name beside it. Those who want to participate but feel out of their element beneath the surface can watch the proceedings from the underwater restaurant.

Some of the guests ask Flora to email them photos and videos of the coral so they can watch them grow, before they are replanted on the reef. It’s a clever way of making guests feel personally invested in the program and also an incentive for them to return.

ABOVE: Coral garden work at Anantara.

At Anantara’s Dhigu Maldives Resort, the staff established a coral nursery in 2010, as the sign notes, “to recover and relocate damaged corals in the lagoon. This long-term project will reduce the impact on the actual reefs allowing reefs to develop and helping to maintain this unique habitat.”

Part of this effort included nine divers taking some 450 coral colonies and transplanting them onto iron frames and existing reefs, which helped to expand the house reef.

Eventually, the staff had to change strategies, because the metal frames rusted and killed off some of the coral. That’s when they switched over to ropes.

In spite of projects like these, trying to stem the tide of coral deterioration around the world is a Herculean task. The biggest culprits are over fishing and destructive methods of catching fish using dynamite, cyanide and bottom trawling, whereas coastal development, water pollution and rising sea temperatures have contributed to coral bleaching.

ABOVE: Transporting coral at Anantara Dhigu.

Stargazing in Paradise: Overwater Observatory Opens in the Maldives

The bleaching reached its nadir during the El Niño events of 2014-2016, which affected most of the reefs in the Indo-Pacific area. “We were incredibly lucky at Kihavah,” Flora said. “We weren’t as badly affected as other places, because we have soft corals that aren’t stressed out in the same way as hard corals by the rising temperature.”

The weather phase of El Niño repeats every four years or so. Exacerbated by global warming, the upcoming phase may be even more catastrophic which could, in turn, have a disastrous effect on marine environments across the world.

Kim Obermeyer is Thailand’s country coordinator for the Reef Check foundation, which trains traveling divers and snorkelers to become EcoDivers and work with marine scientists in almost 100 countries, where they gather vital data about reefs. “Apart from rainforests, coral reefs are the most productive eco-systems on earth. About 33 percent of the world’s fish species are dependent on them and there’s some promising pharmaceutical research happening down there with a few different anti-cancer drugs being developed,” he said.

Land and Sea in the Maldives: Kuda Huraa and Baa Atoll

Foundations like Reef Check and resorts like the Minor Group’s Anantara properties in the Maldives are demonstrating how tourism can play a part in helping to conserve, and educate the public about, these vital underwater ecosystems and the multitude of marine creatures that depend on them.

That said, the most challenging parts of this preservation mission, on land and at sea, will have to be undertaken by the next generation. The Ananatara is also addressing this need with special classes in marine science for children.

One of Flora’s favorite parts of her job in the Maldives is teaching these young people. “My aim is to make the next and current generation understand and respect the environment and want to do their part back in their hometowns,” she said. “Not necessary for them to change careers but just change attitudes towards being more green and sustainable living, and having a greater respect for all of nature.”