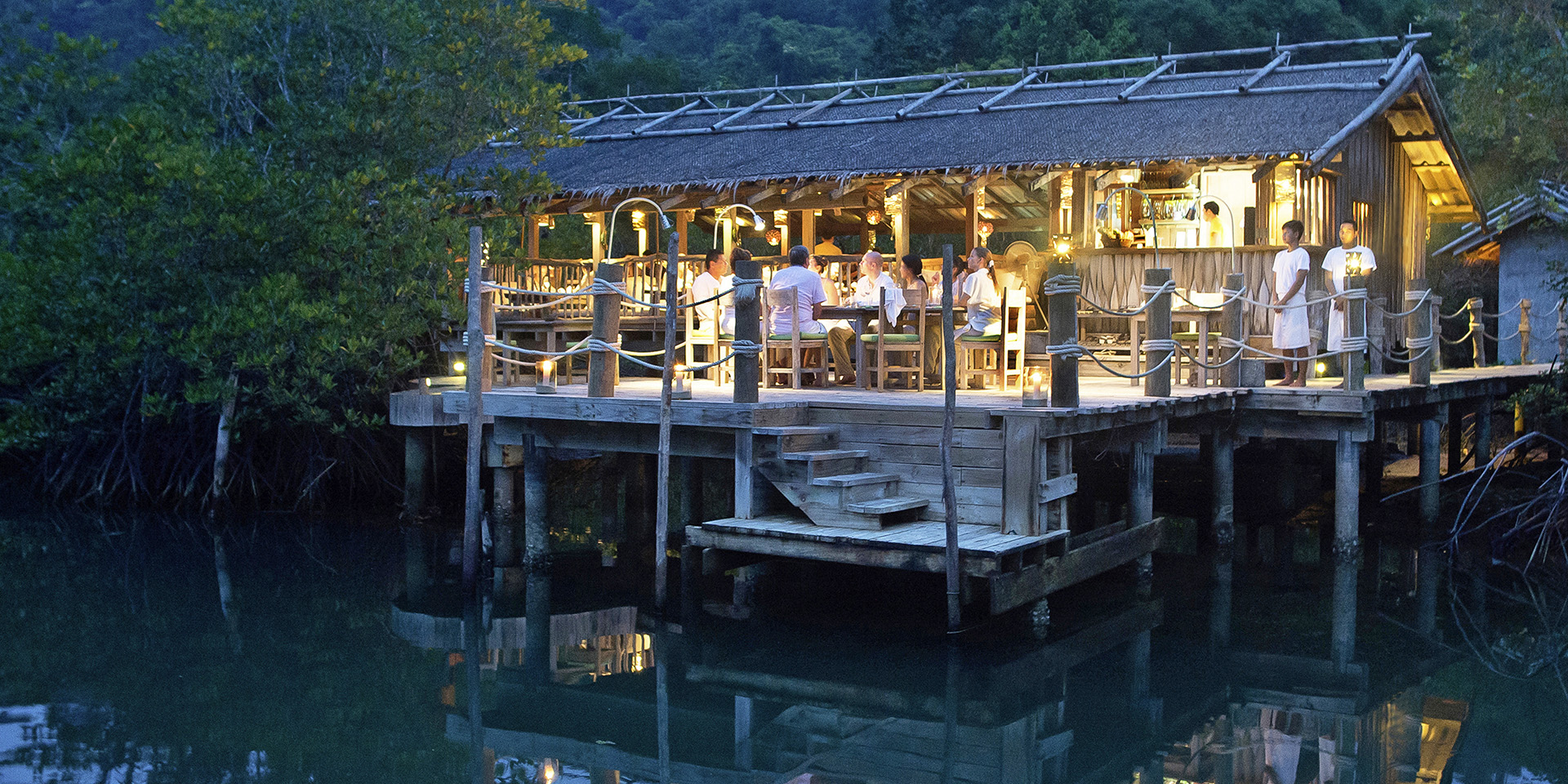 At Soneva Kiri they can put you in a wicker dining room and hoist you into the jungle canopy. They let you run wild in a room filled with complimentary, gold-flecked chocolate. In the mornings, the downstairs of their private observatory is filled with a meat and cheese buffet a short walk away from bottomless ice cream. It is a surprise, then, that the best dining experience comes from the humble Benz’s on the calm inland khlongs of Thailand’s Koh Kood.

The uniqueness of Benz’s begins with Chef Benz. “When I make a menu, I make it like for a family, like if you come into my house.”

Chef Benz has a history with Soneva that goes right to the source; resort owner Sonu Shivdasani found her while dining at a café in rural Thailand.

“He came to dinner with a friend, and after he called and said, ‘You want to go to Maldives?’” She laughs remembering. “I told him, ‘No, can not. I can not speak English.’” But after several calls from Sonu she would go to the Maldives, where she would work for 10 years at Soneva Fushi. “I think, ‘Why does he want to take me?’”

ABOVE: Chef Benz in her kitchen.

The Benz’s experience, however, starts long before the diners taste the food. Guests may arrive by a short ride through the mangrove khlongs or via car from the resort. The setting is that of a stilt restaurant all alone on calm waters – accompanied immediately by the signature Soneva service.

Soneva Kiri has no shortage of sea views and infinity pool pleasures, but the quaint wooden stilt restaurant at Benz takes the “barefoot luxury” concept to a new level.

ABOVE: At Benz’s diners can embrace the calm, intimate setting of the still waters.

We arrived early to see Chef Benz, leaning on one of the wooden posts, smiling a big smile at the early diners. In our conversation, she tells me of the story of her name, given after the eponymous car brand that took her mother to the hospital when she was born. She has been back in Thailand at Soneva Kiri for 10 years now, and her fame has spread far – garnering acclaim from restaurant critics and celebrities.

“Even in rainy [season], it can [be] busy here,” Chef Benz says, stating that the restaurant’s outdoors can seat 15. Through the klongs to the north is the resort and private island airport; over the green horizon and mangroves to the west is the snorkeling haven of Koh Raet. At Benz’s diners can embrace the calm, intimate setting of the still waters.

ABOVE: Simple starter at Benz’s.

To discuss Chef Benz’s menu is a trifle pointless. It changes daily depending on what fresh fish and meats can be had at the market and what is growing in Soneva Kiri’s extensive gardens. The flavors are complex and hearty and very, very Thai.

Some of the ingredients can be found growing along the paths visitors drive by in their private golf carts. We were pleased to see the butterfly pea – which grows around the island – as an aperitif to the nine dishes to come.

Dining in the Canopy on Koh Kood

The meal is presented without pretension, and Chef Benz’s claim to be treated like a houseguest is palpable. Too often one feels like the control in an experiment in a fine dining experience, but not at Benz’s. The staff are careful not to be overbearing or interrupt the serenity of the setting.

The complexity of the dishes ranged from a mosaic of flavors in a prawn pineapple curry that actually tasted of pineapple – rather than, as is so often the case, a curry with pineapple in it – to a simple fried kale and mushroom in oil.

ABOVE: Selected dishes at Benz’s.

The fried larb balls were, that evening, the highlight of the meal, and appear to be a regular staple, with Chef Benz herself very much a fan of Isaan food. Ginger features heavily on the menu. The cocktails, as one finds throughout Soneva Kiri, are a simple affair with class and without pageantry.

ABOVE: A conversation with Chef Benz.

In the end, it is the reputation and talent of Chef Benz that makes Benz so special. The Thai flavors here are used creatively but without frippery. One might be tempted to use the dreaded cliche “quaint” but it isn’t. Benz’s is the junction of Soneva Kiri’s desire for muted sophistication and Chef Benz’s gentle imagination.