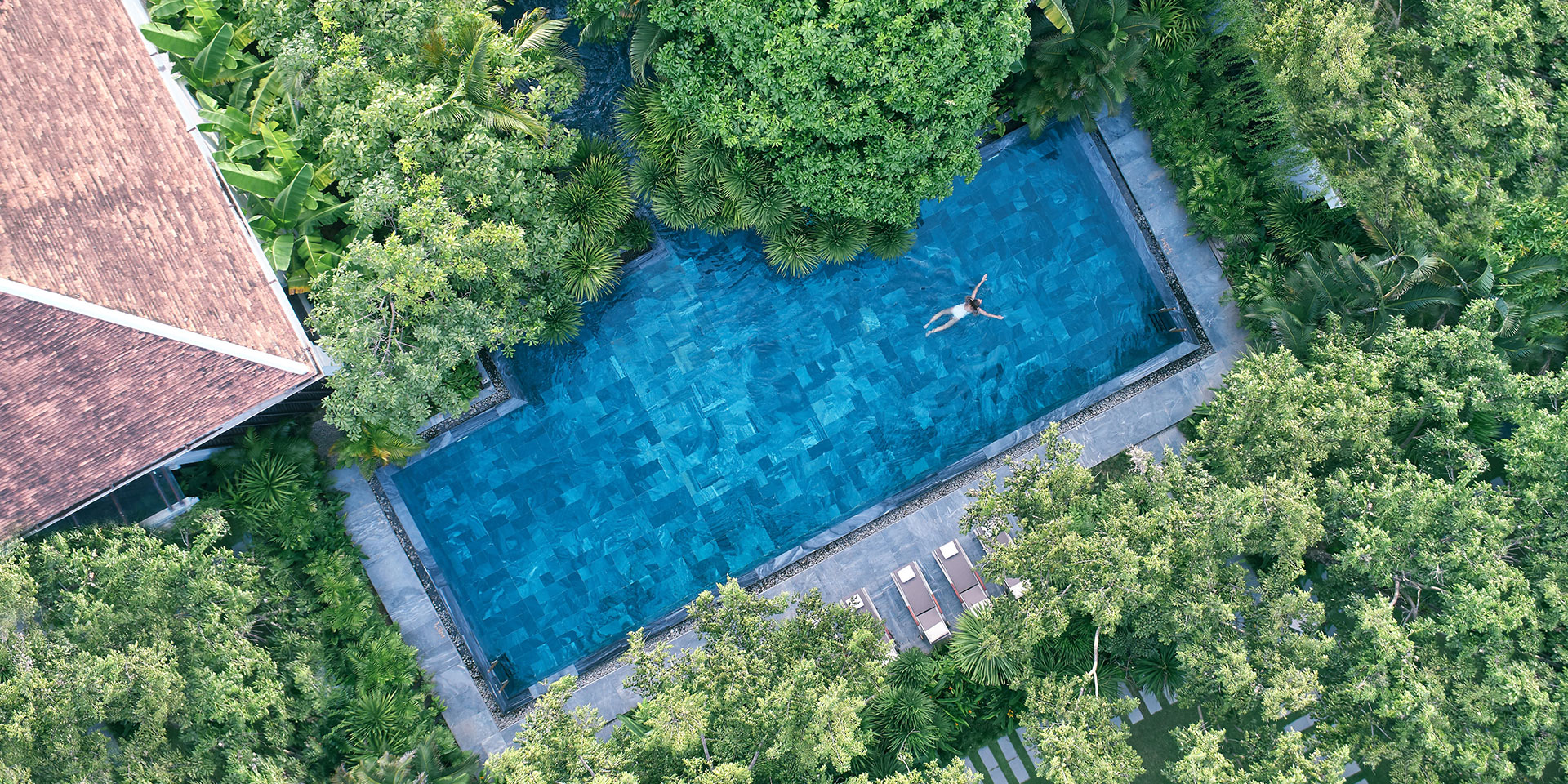 Say what you will about the opulence of a suite, the serenity of a spa, and the magnetism of a bar – nothing shows off a hotel like a pool. From rooftop pools to infinity pools travelers can’t stop snapping pics of their feet pointed toward deliriously blue water.

With summer in full swing we’ve rounded up five pools in Vietnam where you’ll want to dive right in – after taking a photo, of course.

ABOVE: The Reverie’s underwater light show begins every day at 6 pm.

In the age of FOMO, guests of The Reverie Saigon don’t want to miss a beat – literally. The hotel’s sixth floor 24-meter open-air swimming pool has its own underwater sound system that plays music that varies by the time of day. Swimmers can enjoy a range of tunes from vibrant classical to soothing instrumental.

For those who take a dip pre-dinner there’s an underwater light show that begins every day at 6pm. Above water the entire contemporary exterior of the building also comes to life after dark. Over 8,000 light bulbs create around 50 different lighting sequences, all of which are undetectable to guests inside.

Pool-goers can also get a glimpse of the show from one of the two accompanying jacuzzis or while lying back in the resort-style pool furniture.

ABOVE: The Reverie poolside during the day.

For those who wish to leave their plush poolside perch, the property, which spans two of Saigon’s most iconic streets, has a number of sites, shops, and restaurants, within walking distance. A block to the left, at the corner of Dong Khoi and Mac Thi Buoi, is Vietnam House, a restaurant that opened in a 1910 – last fall under the able hand of celebrity chef Luke Nguyen.

A few blocks further is the Opera House. Completed in 1900 its broken mansard roofs and impressive arched façade were a wonder to early travelers, and it still remains a site to be seen. Nowadays, lithe Vietnamese performing artists demonstrate acrobatic feats in the AO Show, which runs most nights.

Also nearby is the country’s most famous Catholic cathedral, the Basilica of Notre Dame, and the city’s main post office, a structure designed by Gustav Eiffel’s firm and built between 1886 and 1891.

ABOVE: The Anam resort’s lagoon pool.

One thing is a constant at this compelling new resort overlooking Vietnam’s pristine Cam Ranh Bay: pool waters as brilliantly blue as the sea and sky. Whether plunging into the Anam’s stunning adult-only infinity pool that meets Long Beach, two other capacious swimming pools for the whole family, or one of 27 private villa pools, pool-goers are spoilt for choice. Two vast reflective pools adjacent to the open-air lobby also mirror the dome of sky and heighten the sensory experience. The reason behind the striking blue hues? Grey slate tiling sourced from Vietnam’s north that works wonders reflecting the spectacular natural surrounds.

ABOVE: Private pool at the Anam.

Under the gaze of dramatic headlands, Anam trades sunbeds for dining tables every evening by the infinity pool. To the strains of infectious pop anthems performed acapella and with acoustics by a strolling Filipino band, the Anam breaks out the champagne and fires up the grill for a nightly feast. Diners are free to take a dip in the adults-only infinity pool before, in between and after their seafood platters and main courses. Meanwhile, the kids don’t miss out with supervised activities including complimentary water gymnastics held during the day at the resort’s lagoon pool.

ABOVE: Poolside dining at the Anam.

In addition to plenty of poolside time, the resort offers a huge range of recreational activities from movies in a 3D movie theater to water sports, tennis, and yoga. With seating for 60, the movie theater, a first for a Vietnamese resort, screens a wide selection of movies. Complimentary daily activities include beach volleyball, badminton, and sepak takraw (a sport known as ‘kick volleyball’ native to Southeast Asia), and other recreational pursuits offered by the resort’s Water Sports Centre range from kayaking and bravo sailing, to surfing, body-boarding and snorkeling for adults.

The Anam also organizes a fishing excursion in an iconic Vietnamese coracle boat and diving in the nearby sea. It’s said the world’s most famed oceanographer Jacques Cousteau’s lifetime fascination with the underwater world began when he went diving in the area while serving a stint as a sailor in the colonial French Navy mapping the coast of Khanh Hoa province.

ABOVE: Pool at the historic Sofitel Legend Metropole Hanoi.

If the walls of Hanoi’s legendary Sofitel Metropole hotel could talk they would have some compelling stories to share – especially one that nestles up to the hotel’s pool. Back in August 2012, when the property was undergoing renovations, they discovered a hidden air raid shelter that wasn’t on their radar. The manager at the time had wondered why the pool didn’t extend further. His question was answered.

Situated two meters below what is now the open air Bamboo Bar, lay a warren of corridors, chambers and stairways that made up a bunker that once hosted American folk singer, Joan Baez, who sought shelter there during the Christmas Bombings in 1972. The shelter is now part of a “Path of History” tour that introduces guests to the storied past of this iconic hotel.

ABOVE: The Bamboo Bar, which has hosted the likes of Graham Greene and Charlie Chaplin, by the Sofitel pool.

Why Hoi An is a Slow Traveller’s Paradise

Above ground the hotel’s idyllic pool is a place of respite in an increasingly busy city. Surrounded by a lush courtyard garden and just next door to the Bamboo Bar, visitors can relax in a lounger and order one of the bar’s legendary cocktails named and inspired by two famous former guests – Charlie Chaplin (a blend of apricot brandy, gin and lime juice) and Graham Greene (a blend of bacardi rum, gin & sugar syrup).

Beyond the property’s walls is the city’s Old Quarter, 36 of the city’s most culturally significant streets thriving with activity and with aging French colonial buildings that are, in part, a draw for their varying stages of disrepair. The Hanoi Opera House, another remnant from the French occupation, is just across the road from the hotel. Construction on the landmark began in 1901, the year the Metropole first opened its doors. Also minutes away is Hoan Kiem Lake and Ngoc Son Temple – two of the top sights in the capital.

The 5 Most Intriguing Colonial French Buildings in Hue

From myriad terraces, from balconies, and even from the La Residence Hue fitness center, guests can drink in views of the Flagtower Bastion of the Hue Citadel but it’s from the pool deck that sedentary travellers can do their sightseeing and sunbathing at the same time. The charming boutique hotel has 200 meters of frontage on the fabled Perfume River, and sits opposite the Flagtower Bastion and its 165-foot wide moat.

Work on the 1.5-square-mile Citadel began in earnest in 1804 after the first emperor of the Nguyen Dynasty, Gia Long, consolidated his hold on the country and set 30,000 conscripts to work. Modeled on designs by the 17th Century French military architect, Sebastien de Vauban the Citadel emerged as Vietnam’s most imposing Citadel (there were others in Hanoi, Saigon and even Nha Trang).

ABOVE: La Residence Hue pool and the Perfume River beyond.

During the First Indochina War in 1947, and during the Vietnam War in 1968, battles raged within the walls here and the walls and bastions suffered from all the tribulation, but Vietnamese preservationists busied themselves on the brickworks after the war and the site remains an essential stop on any visit to the former capital.

The hotel itself is a flashback to another era, once the colonial governor’s residence the property has kept its art deco style with a distinctive bowed façade, long horizontal lines and nautical flourishes – all hallmarks of the streamline moderne school of art deco architecture. The property’s also tricked out in complementary art-deco furnishings and décor that evoke both the 1920s and 1950s.

Framed by swaying palm trees and overlooking the ocean, Fusion Maia Da Nang’s main pool, lays claim to being one of the best — globally. In March of this year leading luxury travel magazine, Conde Nast Traveller (UK), called out the resort’s swimming pool as one of the most stunning in the world.

It may be hard for guests to drag themselves away from the highly instagrammable spot but if anything can it’s the property’s Maia Spa, where spa treatments are included in the nightly rate. To top it off in the spacious spa area there’s another, just as stunning, pool. This one features an an open-air jacuzzi and waterfall, and is tucked away among lush gardens. Think guests may be all pooled out? There’s more. Each of the 87 private villas also have their own private plunge pool.

To break the blissful monotony of pool and spa there are a number of attractions nearby. The UNESCO heritage town of Hoi An is a short trip away with free shuttles offered throughout the day. The historic trading outpost that has preserved its multicultural history with eclectic architecture: French colonial buildings, Chinese shopfronts, and a Japanese-style bridge, all help form its enduring charm.

Travelers can stroll through the pedestrian-only downtown and stop by Reaching Out Teahouse, a social enterprise that serves authentic Vietnamese tea in a beautiful heritage building and courtyard garden. For visitors after a stronger caffeine fix Espresso Station is a coffee house down a small alley that features unique creations like the Dark Soul Latte, with activated charcoal.

Also nearby, in Da Nang, are the Marble Mountains, five imposing crags of marble named for the five elements. While there visitors explore the caves, filled with religious symbolism and offerings, and then take in the 360 degree views of the surrounding area.

Another scenic spot, that looks out over Da Nang’s bay is the Son Tra Peninsula. Along the forest path here are the Rhesus monkeys (the area is also nicknamed Monkey Mountain) and up top the towering Lady Buddha statue looks out over the ocean.