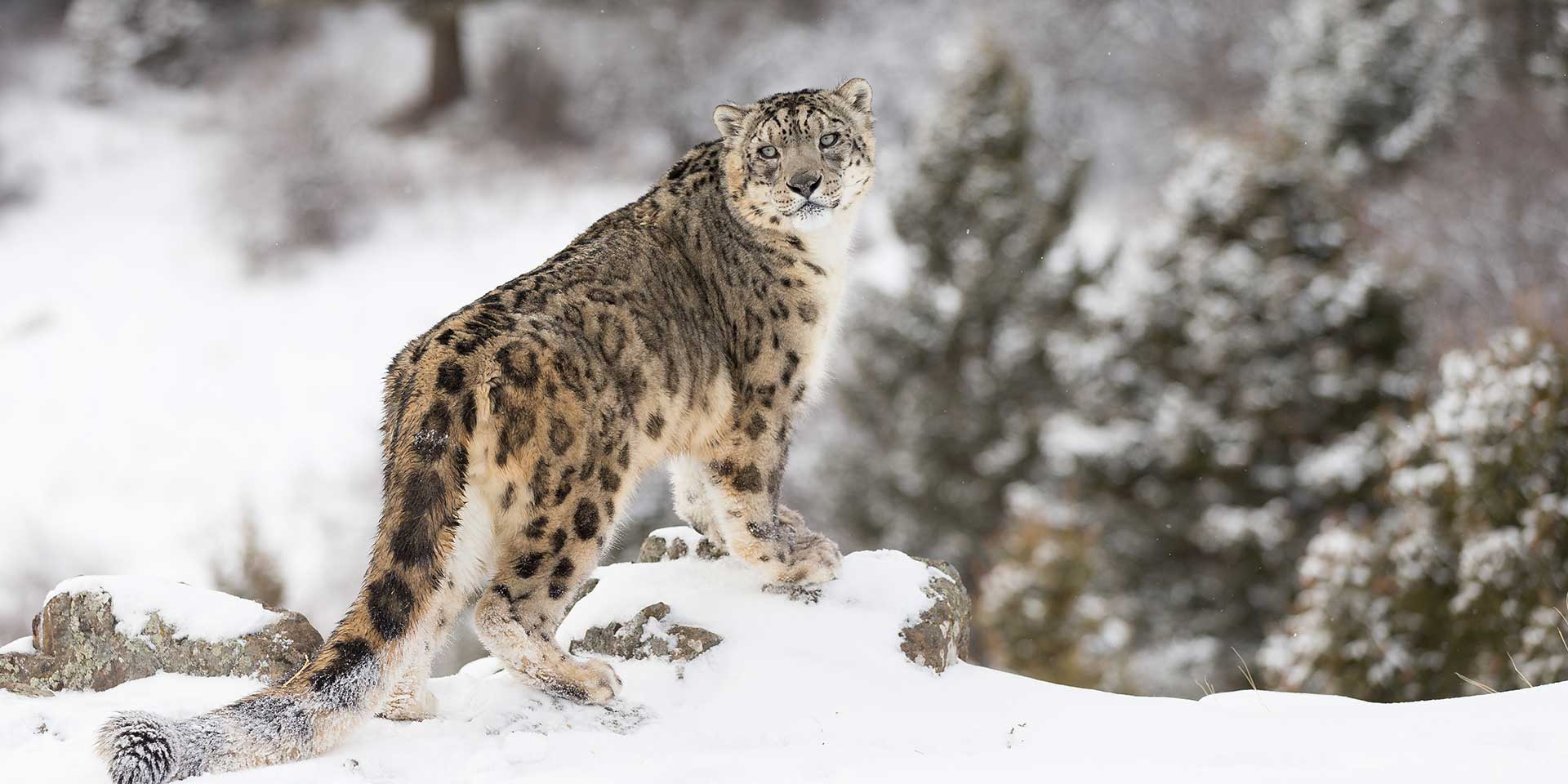 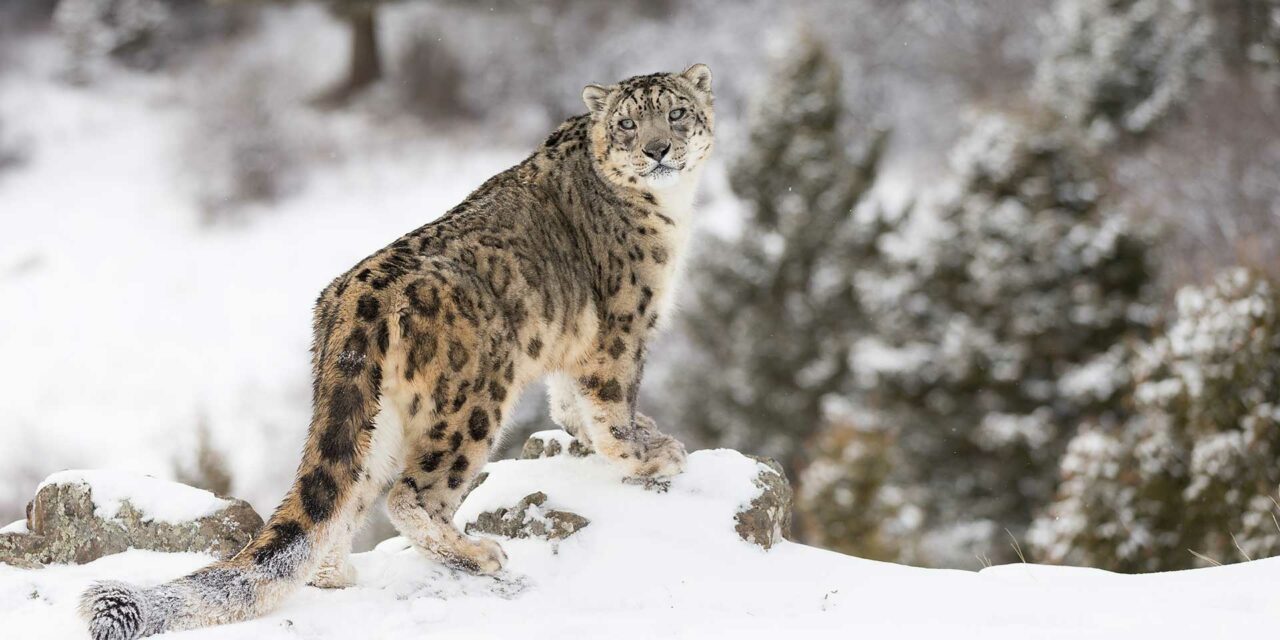 Lurking furtively among the coarse, weathered mountains of the dry Ladakh region of India is one of the most elusive creatures in the natural world, a majestic beast of stealth and solitude. But, tough luck for the leopard because every photographer, videographer, and nature lover worth their salt wants nothing more than to catch a glimpse of this majestic cat in the wild.

Spotting one of the four to seven thousand remaining snow leopard adults is no easy feat– harder still to do so responsibly and with respect for the environment. Distinct for their thick white, yellow or gray coats, spotted with rings of black and brown, snow leopards are built for survival in the dry, rocky terrains on top of the world.

Rahul Sharma, an expert in finding the snow leopard, believes there are three keys to a successful snow leopard trek: comfortable accommodation, a knowledgeable guide, and very, very good luck.

The Fantastic Beast and Where to Find It

They know where and how to look; sometimes we are still gazing at a distant rock and they have already spotted a leopard. It’s because they’ve lived on that land

Snow leopards can mostly be found in alpine and subalpine zones, at elevations from 9,800 to 14,800 feet, tending to favor rocky outcrops and steep cliffs. In other words: they’re hard to reach, and when you can reach them, they’re hard to find. Their habitat extends through southern Siberia – including the Kunlun, Altai, Sayan and Tannu-Ola Mountains – and snow leopards can be found from Kazakhstan and Kyrgyzstan to eastern Afghanistan and northern Pakistan, as well as in the high altitudes of the Himalayas in India, Nepal, and Bhutan.

While there are a lot of places to see snow leopards in India, Ladakh, which means “land of high passes,” is considered one of the best destinations for a likely sighting. Leh, the state’s largest town, is cut off from Delhi for six months of the year when the road is closed, but you can fly direct all year round. The national parks in Leh are the the right conditions at the right altitude, and the locals in the mountainous villages around Leh appreciate the advantages of snow leopard tourism.

ABOVE: Thanks to the work of Snow Leopard Conservancy (SLC) and organizations like it, visitors on treks contribute to funds to help with village issues, and the locals receive compensation in return for not hunting and killing the snow leopards.

Thanks to the work of Snow Leopard Conservancy (SLC) and organizations like it, visitors on treks are encouraged to contribute to funds to help with village issues, and the locals receive compensation in return for not hunting and killing the snow leopards. As a result, households no longer need to keep small livestock and more land is available for the blue sheep that are snow leopards’ natural prey. This, in turn, means the leopards are more likely to venture near the villages, making sightings even more frequent – sometimes seen just sitting and sunning themselves amid the rocks and their mating calls can be heard throughout the valley.

ABOVE: Despite the area’s relative remoteness, there are plenty of creature comforts to be found in Leh.

Six years ago, Rahul’s team started exploring Ulley, a quiet and uncrowded area at 13,000 feet and two hours’ drive from Leh, basing their treks from their newly completed seven-room lodge in the valley. “It’s very basic,” says Rahul, “but it’s a spectacular area and there’s no need for camping. We have electricity, heating, beds and mattresses, and two restrooms – in winter we give our guests hot water in buckets as it freezes.” He adds that there’s a dining room for communal meals, prepared by the onsite cook and kitchen staff.

Good Eyes and a Quiet Mind

Quiet is vital, especially if we think [a snow leopard] is close by. You need a lot of patience, as we might stay for two to four hours in one place

The host of the lodge is also the head spotter, Norbu, whom Rahul describes as “the best eyes I’ve ever seen.” A local villager, Norbu has been working with Rahul’s team for the last 15 years and is training up his son Stanzin. They receive daily word from spotters in the surrounding villages, and based on the news Norbu decides whether to drive or walk – and whether to go out for whole day with a picnic lunch or for half a day. As to what makes a good guide, Rahul says it is nothing to do with training.

“They develop an interest in wildlife when they are herding. They have been out on that terrain since childhood, seeing it all […], they know where and how to look; sometimes we are still gazing at a distant rock and they have already spotted a leopard. It’s because they’ve lived on that land.” He adds that Norbu and his colleagues also receive technical training from SLC, and that experienced naturalist David Sonam, a trustee on the SLC board, often accompanies treks if there’s a need for an expert.

It Comes Down to Luck

ABOVE: Photographers wait to catch a glimpse of the cautious snow leopard.

Norbu called from our position, and over a period of three hours she came as close as 100 feet. She would call back, inquisitive, and move forward a little at a time.

Snow leopards sightings have increased in the area since 2015. Often visitors spot them in the distance, but sometimes they get lucky and see them up close – especially when the snow leopards are hunting.

To maximize the chances of getting a good glimpse, it’s best to travel to Ladakh in high season – from January to April – but Rahul notes that trips are available in November and December, suggesting a minimum stay of seven nights. Clothing suitable for the terrain is crucial – waterproof and neutral tones like browns, khakis, and greens are ideal.

“Quiet is vital, especially if we think [a snow leopard] is close by,” says Rahul. “You need a lot of patience, as we might stay for two to four hours in one place.”

As for photographing the snow leopards when you see them, while sophisticated cameras with big lenses will render the best results, Rahul says that a modern camera with a good zoom will produce a decent enough picture.

In fact, he recalls an occasion in a valley when the spotter pointed out a speck on a ledge a kilometer away. “A female snow leopard started to call – it was a mating call. Norbu started to call from our position, and over a period of three hours she came as close as 100 feet. She would call back, inquisitive, and move forward a little at a time. A guest using a 8000 mm lens could no longer use it and had to switch.”

While it may be the go-to destination for spotting snow leopards, the remoteness of Ladakh also makes for frequent sightings of other wildlife including wolves, urial, fox, blue sheep, and golden eagles. Rahul notes, “Even without a [snow leopard] sighting, guests still come back happy after seeing the other animals.” Ladakh boasts plenty of allure beyond its diverse wildlife – ones that don’t require luck.

Small villages in the area celebrate Losar, the 15-day Tibetan new year festival. Dating back to a time before Buddhism was introduced to the area, Losar originally fell during the winter solstice but was later moved to coincide with Chinese New Year. Packed with rituals and deeply-ingrained local customs, the festival is a truly unique experience. Traditional food and drinks are shared; there is music, dancing, offerings, and recitations taking place at the newly cleaned and decorated monasteries.

ABOVE: Besides the natural wonders of the region, Ladakh is also home to fascinating Buddhist traditions and the annual Hemis summer festival.

Ladakh is something of an island of Tibetan Buddhism in India, and as such is bestrewn with historic temples that lure devotees and visitors alike. Consecrated by His Holiness the Dalai Lama himself, Thikse monastery is a 15th-century marvel perched on a hillside overlooking the Indus river and home to countless shrines and artifacts. Across the river to the south, lies vast and colorful Hemis monastery, site of the annual Hemis summer festival. The local market in Leh is also a great place to pick up Tibetan handicrafts like prayer wheels, Buddhist masks, and Thangka paintings as a reminder of your journey.

There’s much to keep one occupied in Leh; in the end, it’s no wonder the snow leopard makes its home in such a charming place.