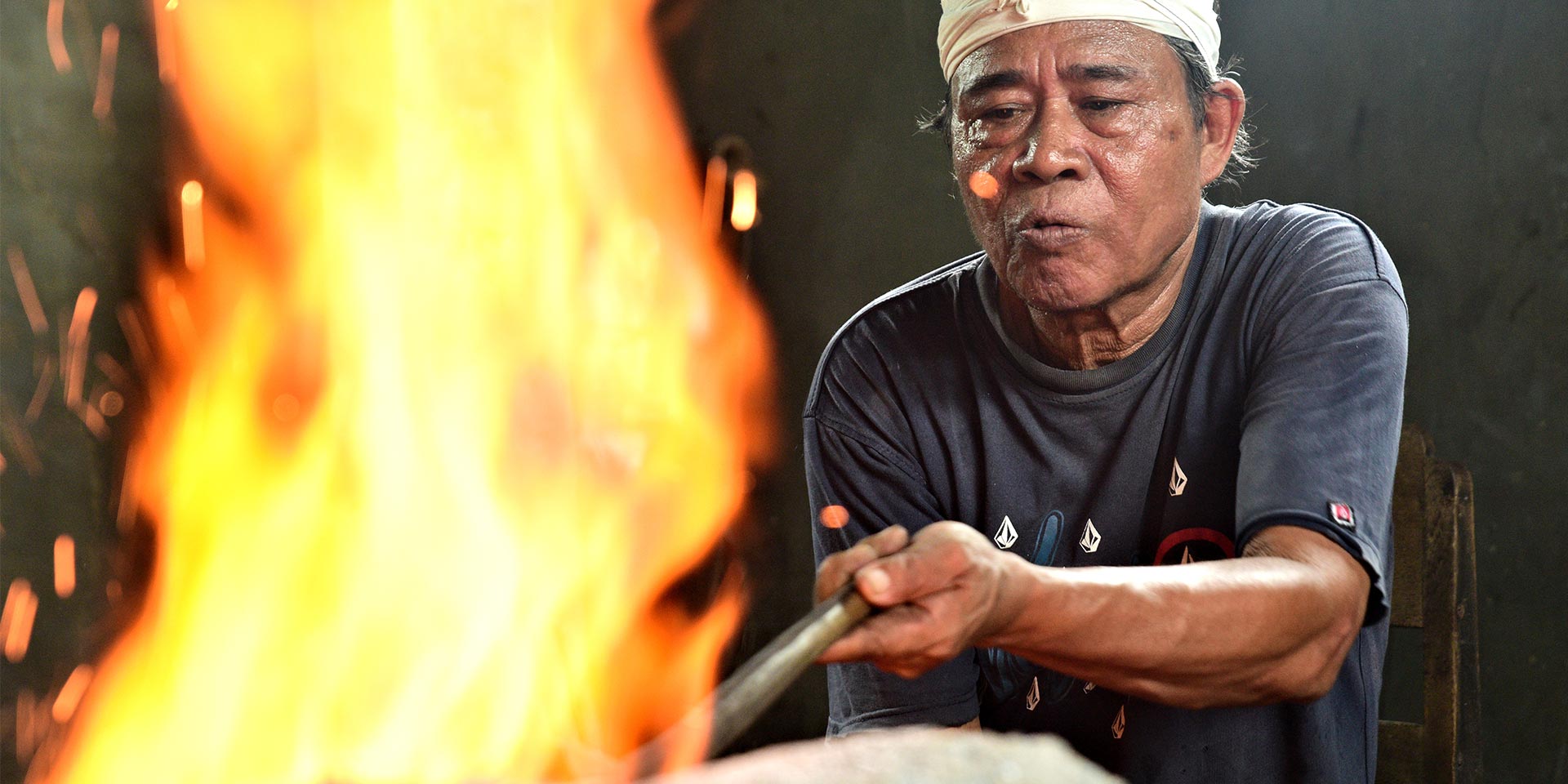 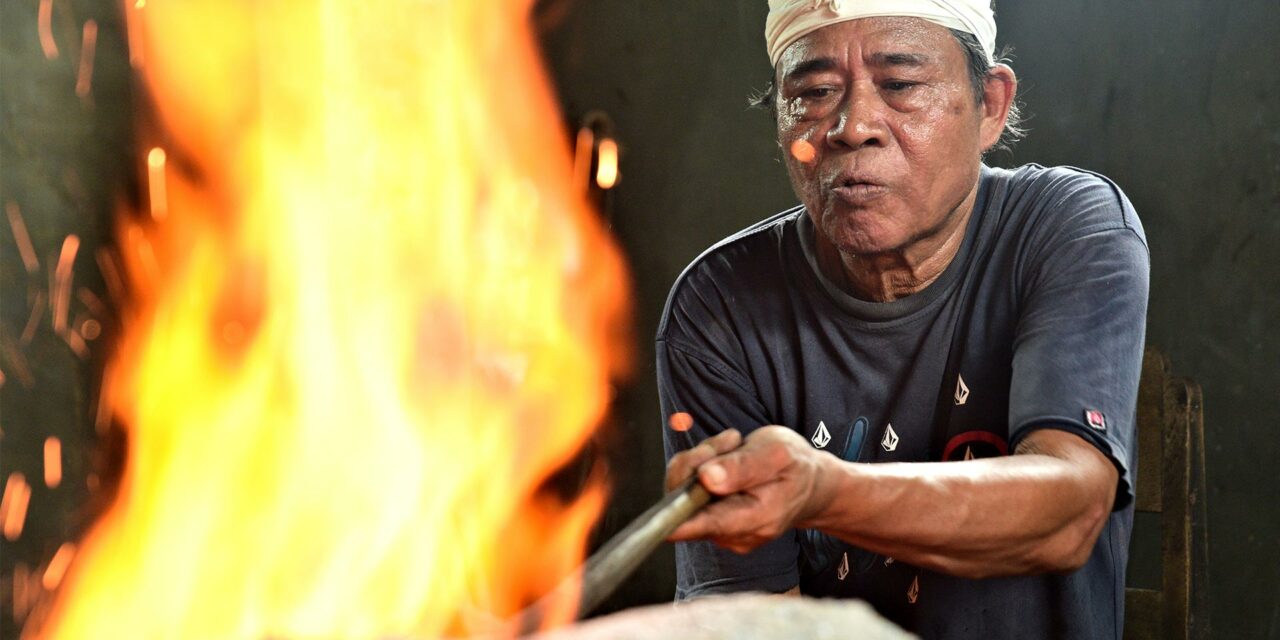 Crafted by man but imbued with the power of the gods, it is Bali’s most sacred tool – at once a weapon and a lucky charm. Despite this great power, the UNESCO-protected keris dagger is dying out, with only a few men remaining in Bali who have the skill and the chosen bloodline required to make them. I tracked down one of Bali’s last craftsmen of keris, a dagger with a snake-shaped blade which is a focal point of religious ceremonies on the island.

This 9th-generation blacksmith welcomes me into his workshop and showed me a few, but not all, of the tricks to making a keris and explained the deep history of these weapons. Historians have found depictions of these daggers in Indonesian art stretching back more than 1,000 years. All these years later they remain culturally significant. Some grooms wear them during their Balinese wedding ceremonies, while male worshipers also don them during some Hindu rituals. The kerises are believed to not just offer protection from harm, but also to bring fortune.

I discovered that just finding this keris maker, Empu Ketut Mudra, was a mission. I could spot no phone number or address listed for his workshop online. My Balinese friend managed to ask around and found a rough location for his workshop. “Go to this village, use his name and ask people where he lives,” she told me. So I decided to take a punt, hire a driver and set off on the one-hour trip from my hotel in Ubud to Kusamba village on the south-east coast of Bali.

When we arrive in this small neighbourhood my driver asks a few locals for help, each of whom give vague directions. Eventually, after a few false starts, I spot a small sign for Empu Ketut Mudra’s business. The 66-year-old does not advertise his services widely. Bali is covered in shops which claim to be selling genuine kerises. But, like so many things for sale on this heavily-tourist island, they are not as they first appear.

These kerises are not crafted in the traditional manner, instead produced en masse in factories which are purely profit driven. Not only do they not have the same spiritual significance as proper keris daggers but they are also typically very inferior in quality. Some local vendors are happy to sell these fake kerises, which angers craftsmen like Empu Ketut Mudra, who see them as sacred objects.

This is part of the reason he prefers to keep a low profile, prioritising what he sees as his “art” over making big money from kerises. Although he did not know I was coming, Empu Ketut Mudra is very pleased when my driver, who is doubling as an interpreter, tells him I want to write an article about kerises. “The traditions of kerises, the history of kerises, this is all very important,” he says to me as we sit near a raging fire inside his modest workshop. “The Pandes have given a lot to keep the real style of keris from disappearing.”

The Pandes are a Balinese caste, the only group of people on the island who have the required bloodline to craft authentic keris daggers. Bali has a unique and complicated caste system, with the Pande being one of the smaller groups within this network. When the Dutch made Indonesia into one of its colonies in the early 1800s they tried to break apart the caste system in places like Bali.

During this turbulent period the Pandes attempted to preserve their customs, to stop their ancient ways from dying out. To do so they had to keep their crafting of keris hidden from the Dutch for almost 150 years. The fact that his ancestors managed to survive this turmoil and maintain their traditions is of enormous pride to Empu Ketut Mudra. He is the ninth generation of blacksmiths in his family and he has taught his sons the Pande secrets of keris production so they will become the tenth.

Together he and his sons painstakingly handcraft kjeris blades for customers spread across the globe. The rise of the internet has meant traditional Indonesian artisans like Empu Ketut Mudra can connect with foreign collectors who value the craftsmanship and sentimentality embedded into their products. It is laborious but rewarding work.

ABOVE: Crafting a keris with Empu Ketut Mudra.

Outside of Empu Ketut Mudra’s studio today it is 33C and 70 per cent humidity – truly stifling weather. Yet this craftsman spends long periods of time standing over an open pit of flames, heating up long strips of steel. Once they are glowing orange he places them on a bench and holds them in place with a vice while one of his sons thump them over and over and over with a hammer.

ABOVE: Empu Ketut Mudra at his forge.

The intent is to create an even denser and stronger piece of steel, one which will not break while being wielded in battle. This, of course, was their original purpose. kerises may be used for ceremonial or decorative purposes these days but they began as tools of murder. Empu Ketut Mudra declines to show me the remainder of his process for making these daggers. “Some things must remain secret”, he tells me, with sweat pouring down his face.

It is these tricks of the trade, shared from one Pande to another over centuries, that allow them to create highly-prized kerises. Some of his daggers sell for up to $400, depending on their size and the intricacy of their design. There are more than 30 different styles of kerises, and dozens of traditional patterns which can be etched into their blades.

“I can make them all,” Empu Ketut Mudra tells me. He quickly emphasises this is not a boast. There is nothing special about having such ability – it is to be expected of any real Pande blacksmith. The ageing artisan looks me in the eye and sums up their pursuit in one sentence: “We are the only true ones.”